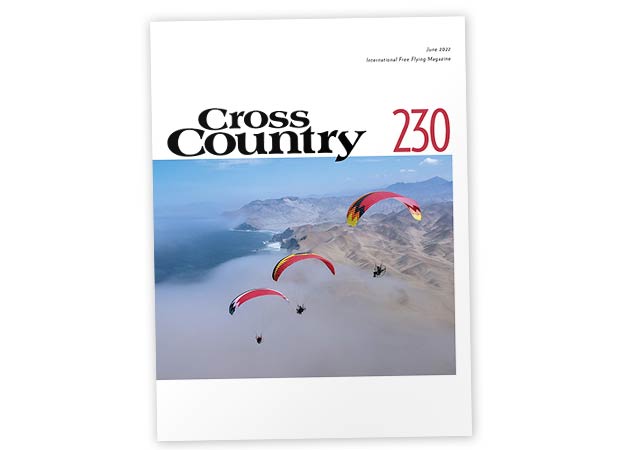 Take control this issue, with advice from some of the world's best pilots on how to master your glider on the ground and in the air 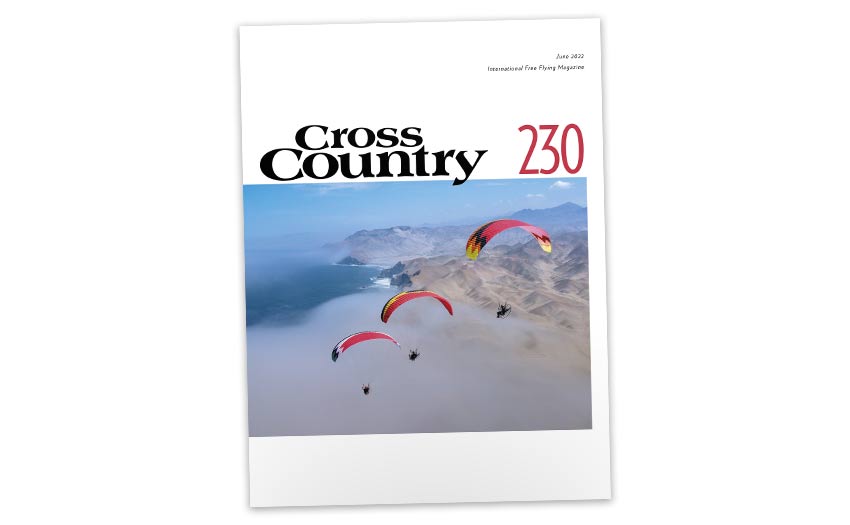 Three pilots surf above the clouds along the coast of northern Peru on the cover of the latest issue, Cross Country 230 (June 2022). The view beyond reveals a landscape of giant rippling dunes best seen from the air. It’s a window into a world few rarely ever get to see. Here’s what’s in this month’s magazine. 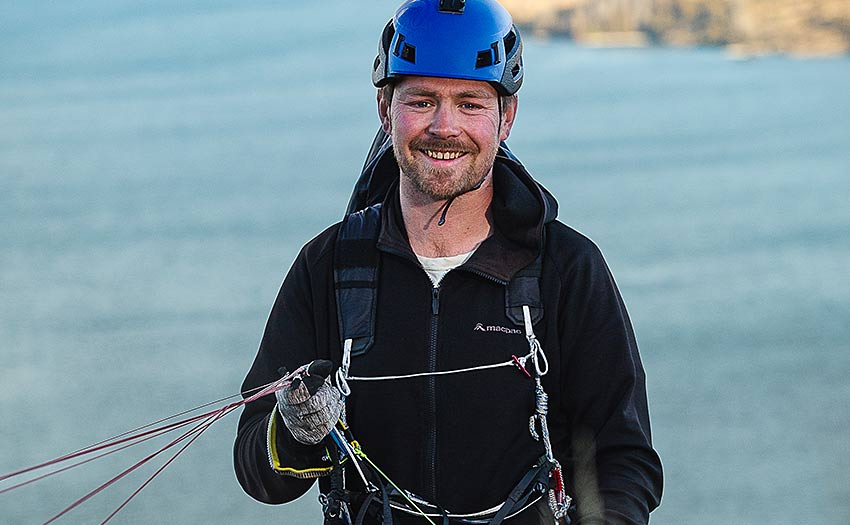 “To be flying around the back country tagging turnpoints with friends was just epic. We need to be doing this all the time.” Ben Kellett on why learning to fly in New Zealand changed his life. 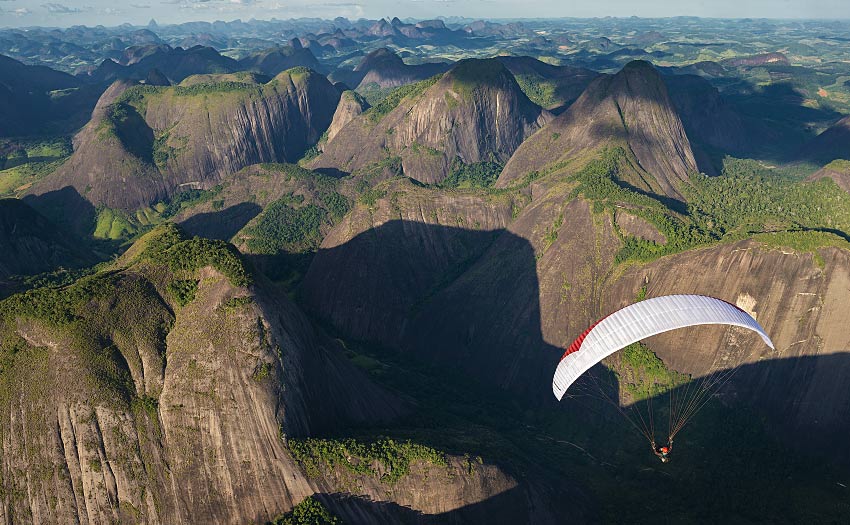 “Pancas Day” in the Paragliding World Cup leaves pilots elated, and we can see why. “Even the mayor calls his town Jurassic Park” says the PWC’s Ruth Jessop, who reveals how to fly here as an independent pilot. 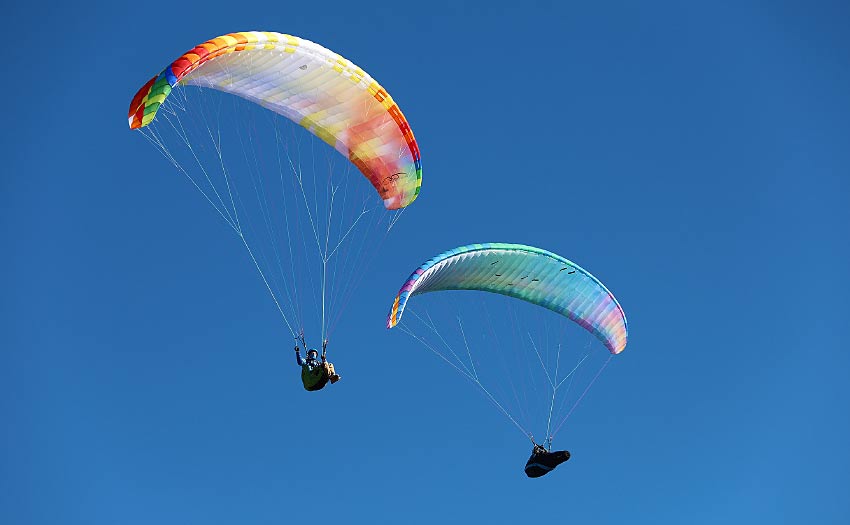 Doing a glide test to compare one glider against another is an art. Bruce Goldsmith explains what’s involved and how to do it right. 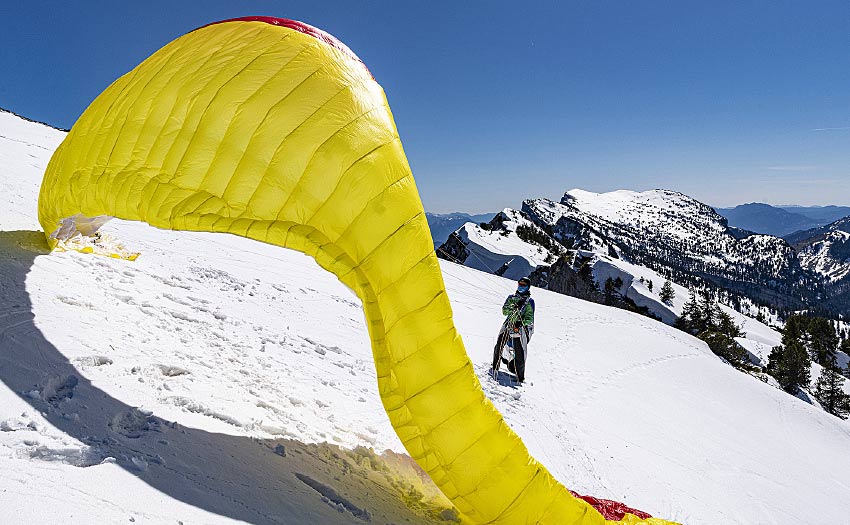 Greg Hamerton kicks off a new series on techniques with 10 tips on how to master the art of ground control. “What you’re doing is improving your launch confidence, so when it comes to the launch site you really have command of your wing.” 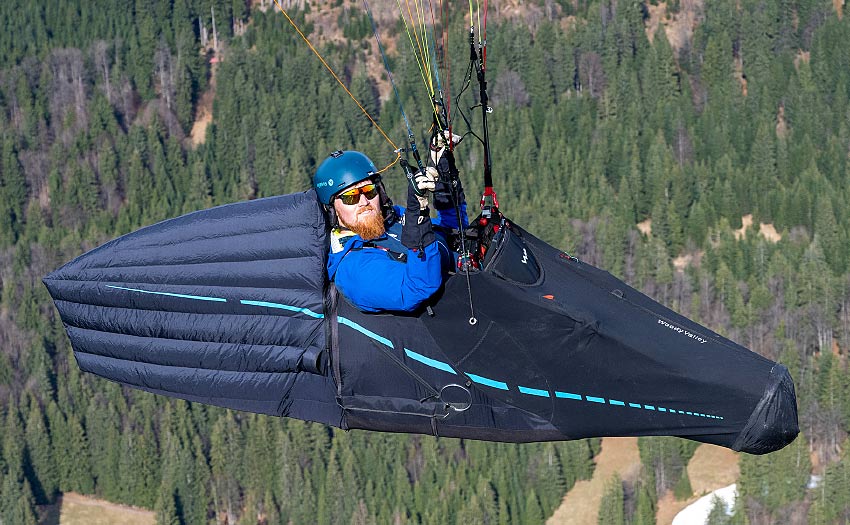 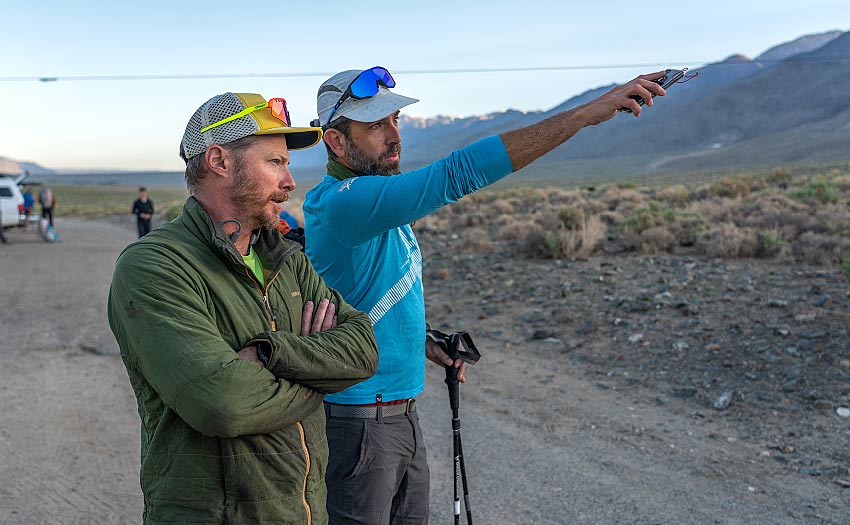 “What makes a mentor?” Gavin McClurg takes a look at who helped him as he was developing as a pilot, and what they taught him along the way. Photo: Ben Horton. 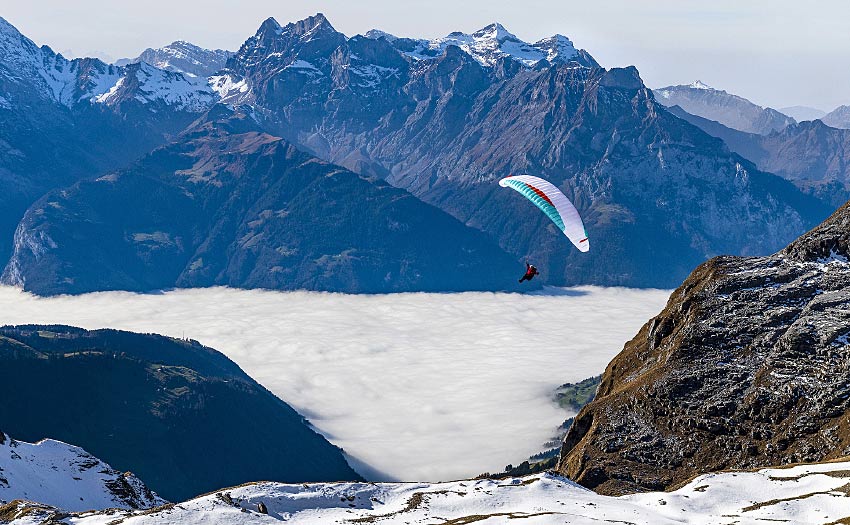 Resident weather expert Honza Rejmanek explains how different layers in the air mass couple and de-couple – and what that means for the flying day ahead. 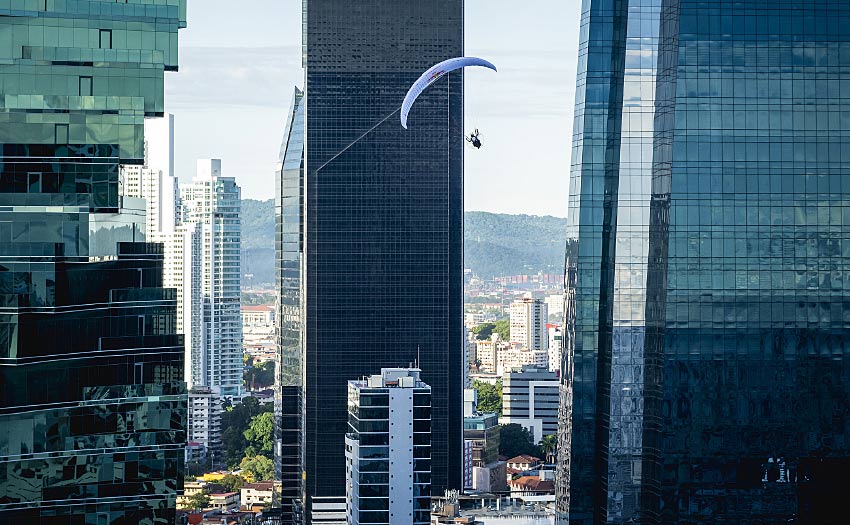 Jeff Goin asks if you should ever pair an advanced paramotor wing with a weekend-pilot skill-set. His answer? “Yes, but…” 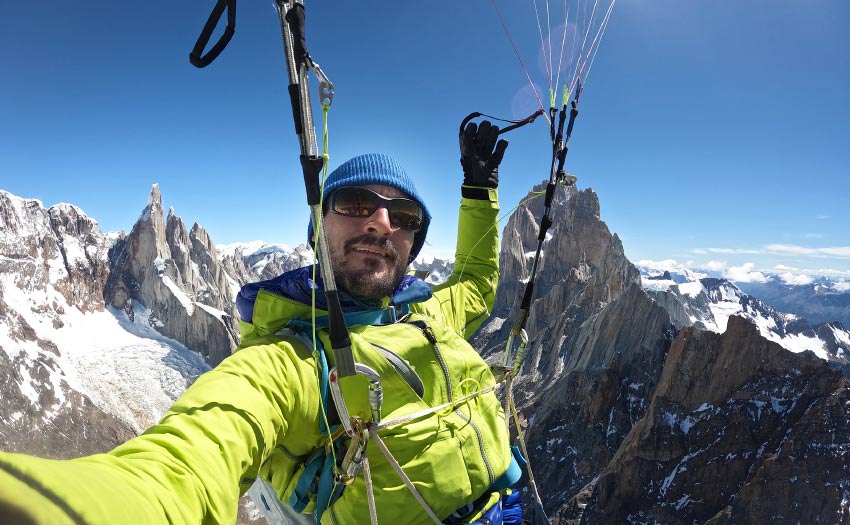 The 3,000m granite spires of Patagonia’s El Chalten region saw paragliders fly from them and around them on one rare day in January. Mario Heller and Manuel Canale report. 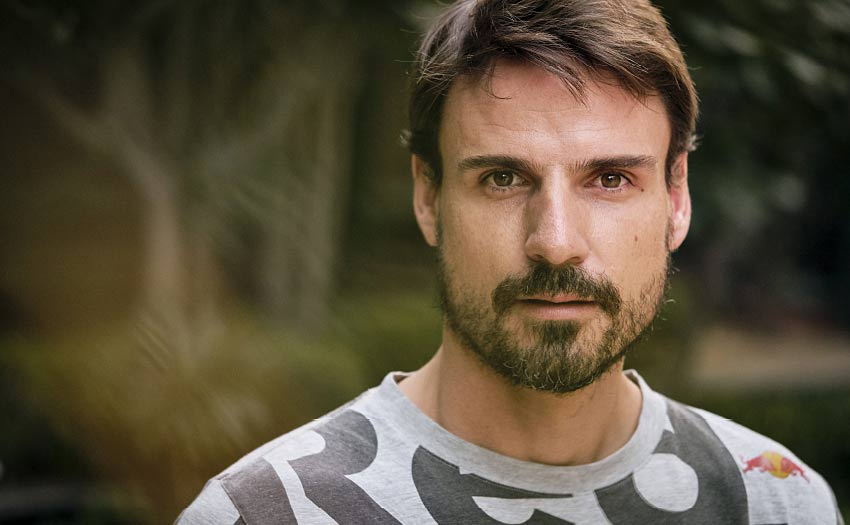 Horacio Llorens has been at the top of the Acro game for 21 years. In an exclusive in-depth interview he reveals why now is the right time to quit competition, and reveals what he is planning to do next. 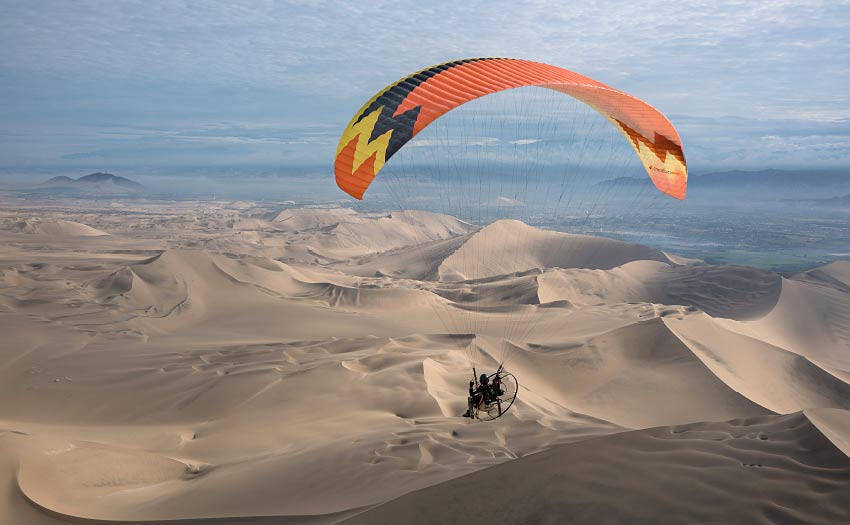 “Most of us had the pleasure of flying dunes at some time in our career,” writes photographer Jeff Hamann. From ripples in the beach to mountains in the desert he reveals the world of dunes from above. 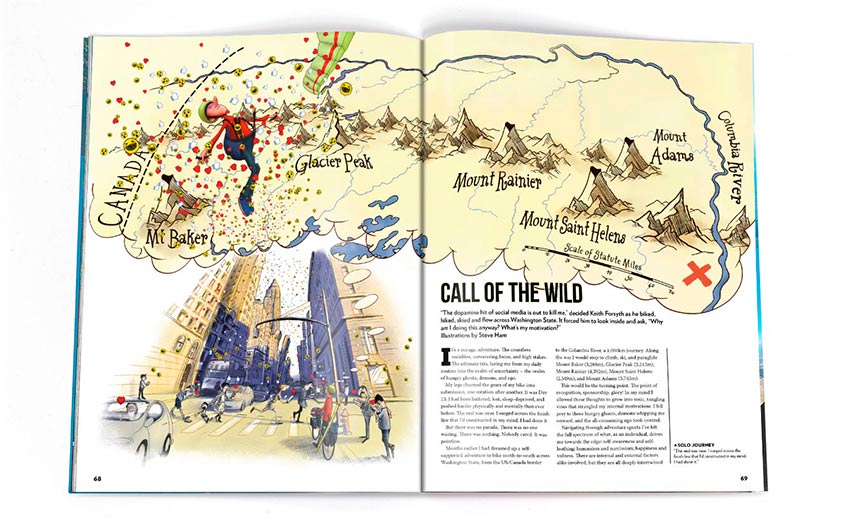 “The dopamine hit of social media is out to kill me,” decided Keith Forsyth as he biked, hiked and flew through Washington State. It forced him to look inside himself and ask, “Why am I doing this? What’s my true motivation?” 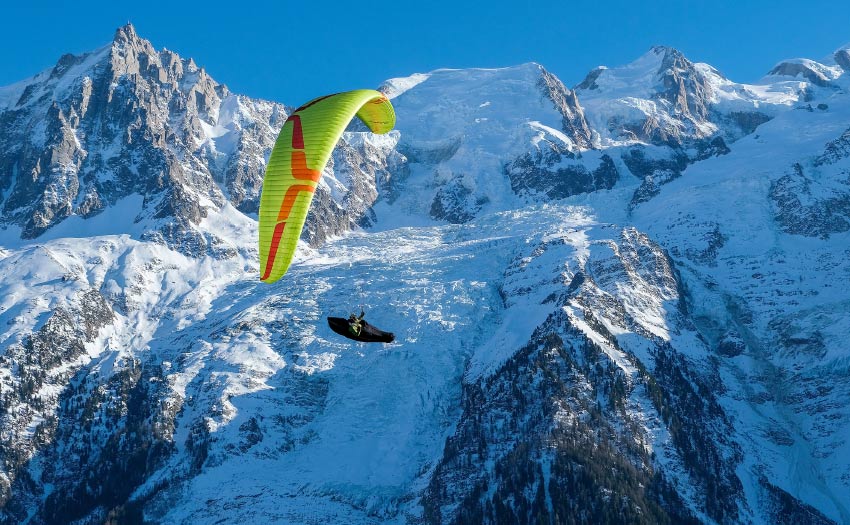 We were lucky enough to get our hands on one of the first Enzo Zeno 2s off the production line. Hugh Miller has been flying it all season and tells us what it’s like. 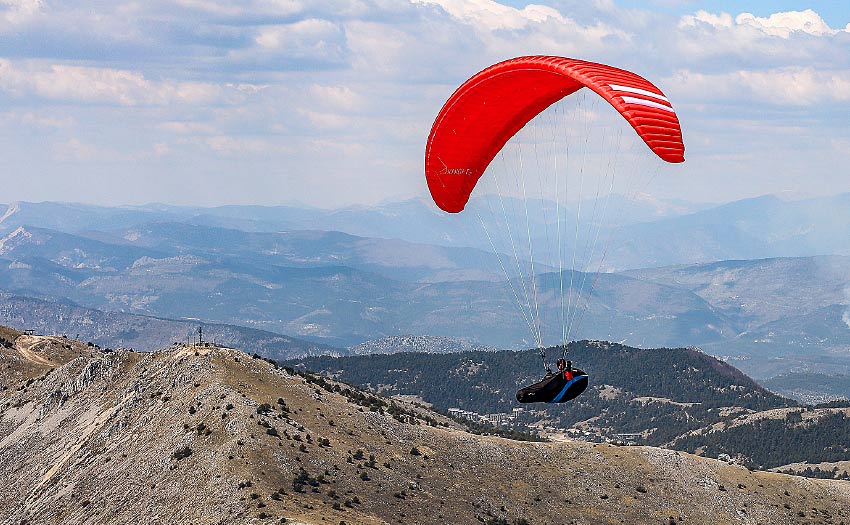 Triple Seven’s new Knight 2 is a mid-B that is packed with the latest technology, including rear-riser control. Marcus King reviews it in the south of France. 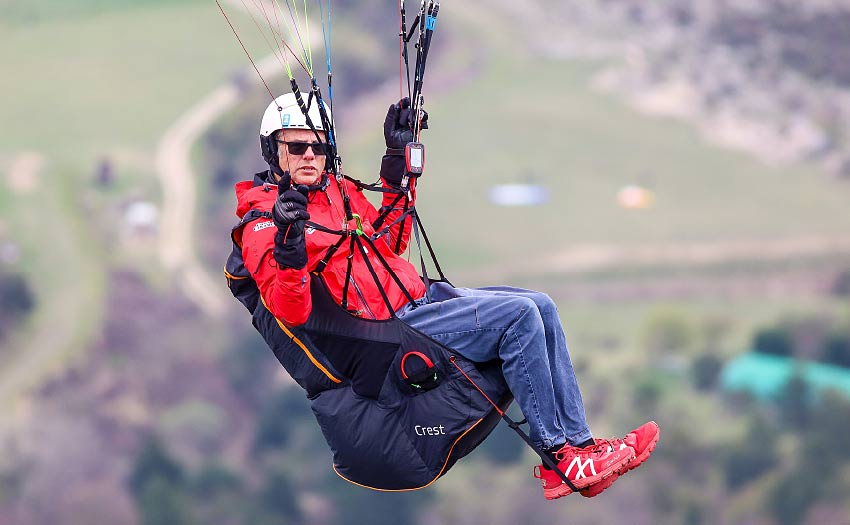 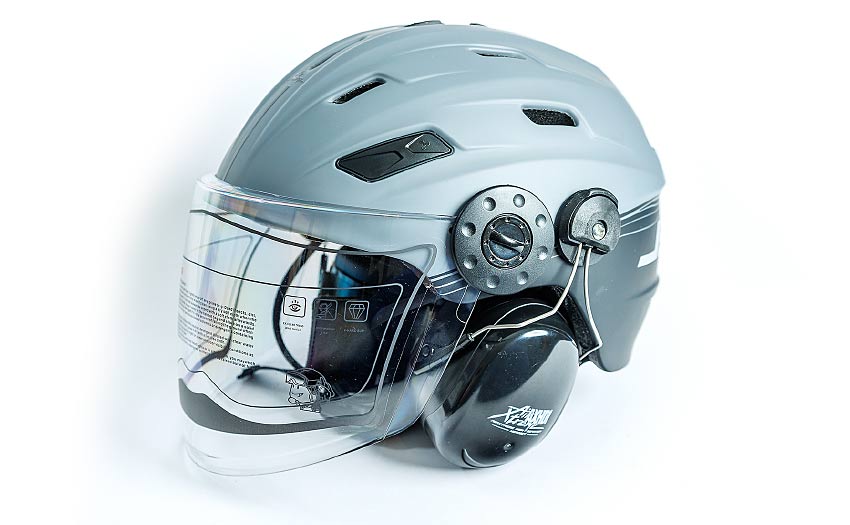 And Acro’s new Jetcom helmet, designed as a dual-purpose lid for both paragliding and paramotoring.

And finally, in our regular Head Game column Liz Dengler explores fear with US pilot and back-country skier Teague Holmes. “If you have one of those experiences you have to let it guide you.”

Let us guide you through the sky and the sport with the latest issue of Cross Country magazine, out now.