When the wind is strong even the lowest dunes offer the potential for some fantastic days out. Bastienne Wentzel heads to the coast to power up the mini wing and finesse her high-wind skills.

When I arrive early on a flyable Sunday morning at Wijk aan Zee on the Dutch coast the regular crowd is already there. Pilots are playing around, flying the low dunes with very small mini wings, so it must be windy.

I start the day groundhandling a 10m² Little Cloud prototype borrowed from local legend Max Morriën. Later the wind calms down and I switch to a medium-sized Little Cloud Kagoo 2, a 16m². That’s better! Not nearly as nervous and perfect for hours of fun. By the end of the day at least 50 of us are floating around quietly under ‘big’ wings, regular XC and competition gliders, as the wind drops to almost below soaring level. Some fly the 15km or so to Egmond to soar the apartment buildings, then fly back for a drink and a chat at sunset. 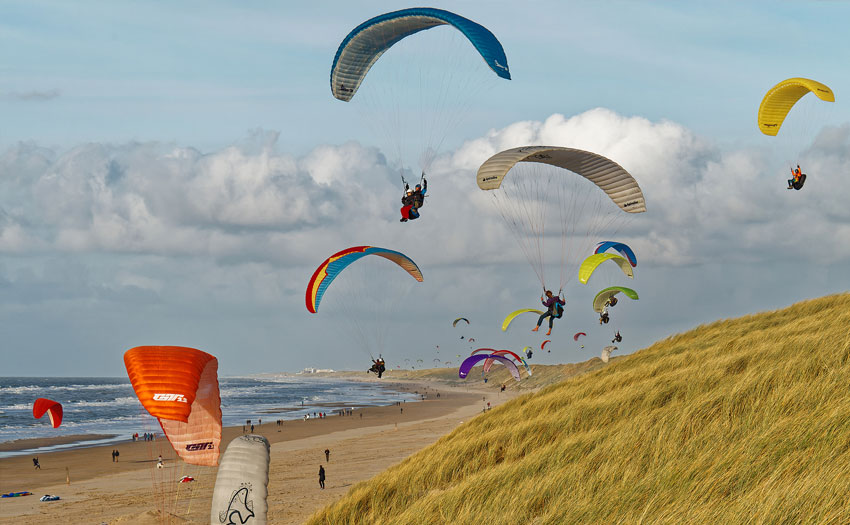 The dunes at Wijk aan Zee are no more than 10m high, but attract scores of pilots when the northwest wind kicks in. You need at least 18km/h to stay in the air

Tom Bourdeau, founder of Little Cloud, has flown in Wijk aan Zee a number of times. “It’s so easy to reach,” he says, “You don’t need a shuttle to launch and you can fly to a bar and have a coffee if you need a break. It’s a great place to fly.”

Just 20 minutes by car from Amsterdam Airport, Schiphol, the dunes at Wijk aan Zee are no more than ten metres high. That means you need quite a bit of (northwest) wind to stay in the air, 10 knots (5m/s or 18km/h) at least. Some locals fly with winds over 25 knots. Tom knows the challenges: “You need strong wind skills. You can be pushed behind the dune easily. You’ll also be flying low, running the risk of spinning the glider close to the ground. But I was amazed at how well the dunes work, even though they are so small.”

Before flying any dunes in strong wind it’s important to brush up your kiting skills, explains Max, who teaches groundhandling and soaring with paragliding instructor Jitte Jorritsma. Like many fragile dune landscapes Wijk aan Zee is protected, which means you can’t just trample to the top of the dune and launch. If it is soarable the wind is also usually too strong on top to do that anyway. So that means starting low and working your way up into the lift band.

“The one thing all pilots underestimate is how difficult it is to take off by starting on the beach and walking up the dune with the glider inflated until you have enough lift to launch and fly away,” says Max. “Kiting is the most important skill you need.”

In the air, it’s all about see and avoid, especially when things get light and tight. Normal rules apply, but when in doubt, you can just turn towards the beach and land. If you’re nervous that you won’t be able to take off again, then that tells you that you need more groundhandling practice. 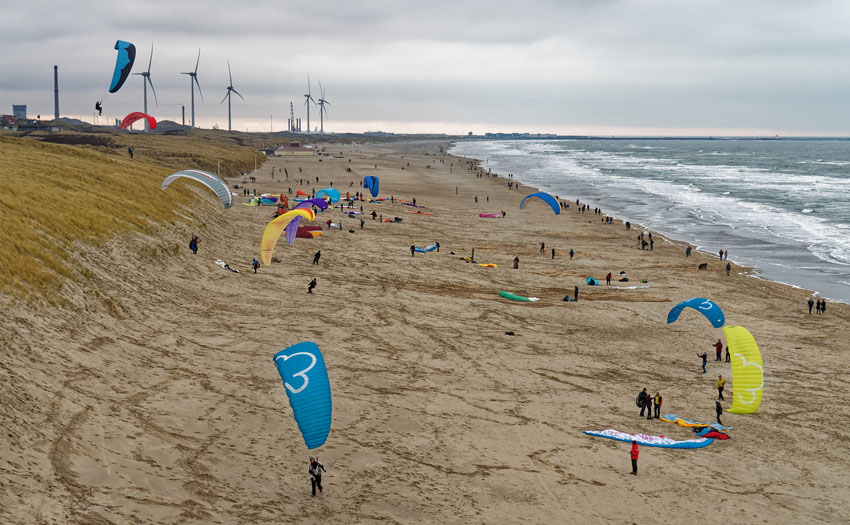 What gear to use

Technically you can use any flying equipment for soaring the dunes. There are no gliders that are unsuitable for strong-wind soaring, agreed all the local Dutch pilots we asked. Most pilots who regularly fly low dunes however, own at least two gliders and in many cases more than that. Bring your regular-sized paraglider and if possible a smaller one; about three sizes smaller will do for most conditions.

EN class has less meaning for low dune soaring, although it says something about the dynamics of the glider. Picking the right size for the conditions and your skills is much more important. Contrary to some belief, acro gliders are not a first choice for strong-wind soaring. The long lines induce a large pendulum which means you can’t turn very quickly.

Perhaps surprisingly Tom from Little Cloud is not too worried about any potential damage from sand and salt water. “Don’t be scared of ageing your glider,” he says. “At the dunes it will just get dirty. We have measured the porosity of mini wings with 700 hours of soaring and they have been perfect.”

Salt doesn’t seem to harm gliders, says Tom, just as it doesn’t harm kites too much. More importantly in his experience is moisture, which ages gliders a lot more than we realise. His advice is to make sure your glider is dried thoroughly after a day at the beach, then shake out the excess sand and store it as normal.

For a harness, Max suggests, “Use a light split-leg harness with proper protection. A heavy harness with a seat plate is cumbersome for groundhandling.” That said, for your first trip to the dunes, your regular harness will do just fine. Most pilots at Wijk aan Zee leave their reserve at home; pilots rarely fly higher than 30m and they will just get sand in. A speed bar or trimmers are your safety net if the wind increases. 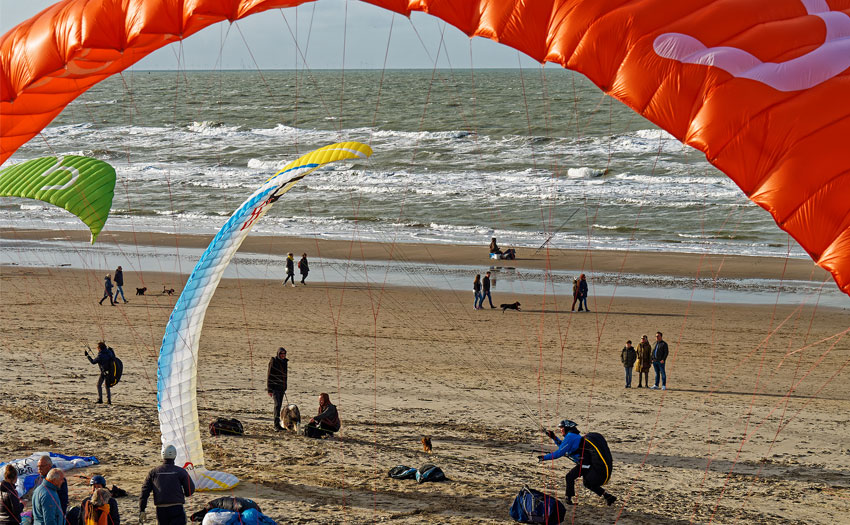 Mini wings are very popular for high-wind soaring in The Netherlands, where lots of pilots soar the dunes for obvious reasons (most of the west half of the country is below sea level). Mini wings are generally smaller than 20m2 and their short lines mean they are very direct and, once you are used to their slightly quicker reactions, they are easier to control than gliders with longer lines. Many manufacturers have a mini wing in their range, from easy EN-A gliders to expert almost-speed gliders. There’s one for everyone.

Looking around on the Dutch beach, it’s hard not to notice the number of Little Cloud mini wings flying. Tom Bourdeau has a reason for why they are so suitable for soaring low dunes in strong wind: “Little Cloud wings are pitch stable and do not overshoot or pull you during inflation. The moment that a wing is fully inflated is important because then it will start to pull you. It should be inflated just when it is overhead, no sooner and no later.

“Also, we position the cell openings so that there is always air flowing in, even at extreme angles of attack. You will have the same feeling on every Little Cloud you fly, it is our DNA.”

XC at the beach

As well as a mini wing many coastal regulars in the Netherlands fly a high-performance two-liner or a competition wing. The main reason is the great glide they give, especially in weak conditions.

Locals fly north from Wijk aan Zee with these high-performance machines, reaching Bergen aan Zee or Camperduin, 30-35 km away. On a good day, some will take off early and fly all the way north almost to Den Helder and back, a 90km trip. Some stretches require a touchdown, but too many of those and you won’t make it back in one day of daylight. It means the return trip is not valid for an online league like XContest, but it is still only for the elite and is highly regarded.

At first glance, the soaring scene at somewhere like Wijk aan Zee can seem daunting, crowded and a bit unruly. Many locals will be flying around one spot, showing off their skills close to others, earning a reputation as cowboys for some. But a closer look reveals their incredible skill, which enables them to avoid incidents where inexperienced pilots with less skill can’t. Also, they’re a really friendly bunch of boys and girls, happy to share their knowledge. So if in doubt, ask them for a few tips and they’ll be glad to help

How to manage strong wind 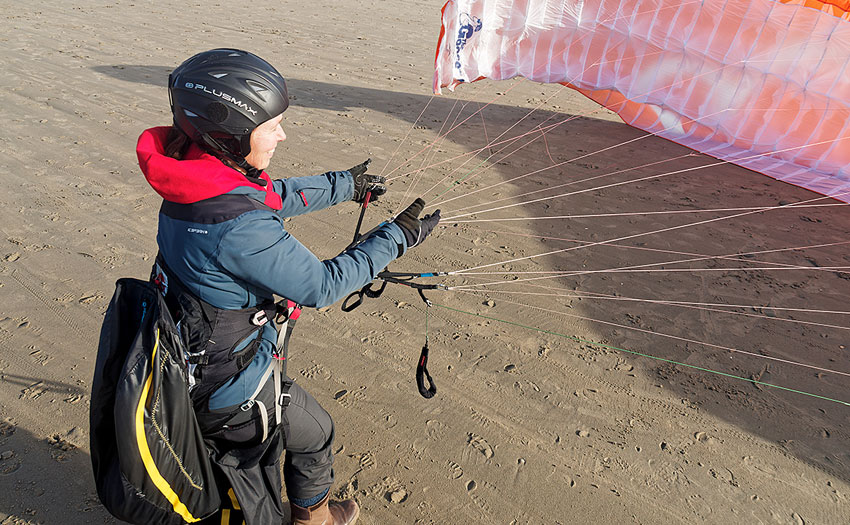 1. Don’t touch the brakes. Almost all pilots overreact. Try this: when groundhandling on the beach, leave the brake toggles on their keepers. Inflate the glider gently and correct it with your body by turning it and putting more or less weight or tension on the risers. Move your feet as little as possible. 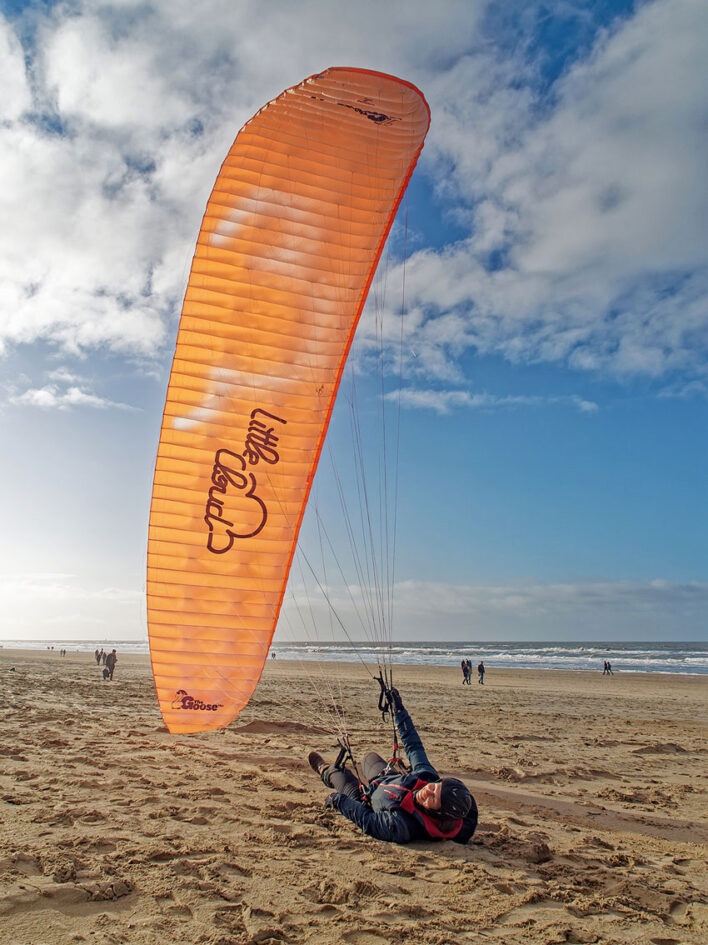 2. Learn how to kite the glider. After inflating the canopy, put one tip of the canopy down by gently braking it and turning your body towards the lower tip. Correct by turning your body or light brake input. Again: don’t overreact! Keep it still on one tip. Then slowly move it around to the other tip. Then walk a bit with it and stop again. Sit down and stand up. Turn, run, stop, until you can do it blindfolded in any wind. Then walk the glider up on the dune with one tip down, put it overhead and fly away into wind. 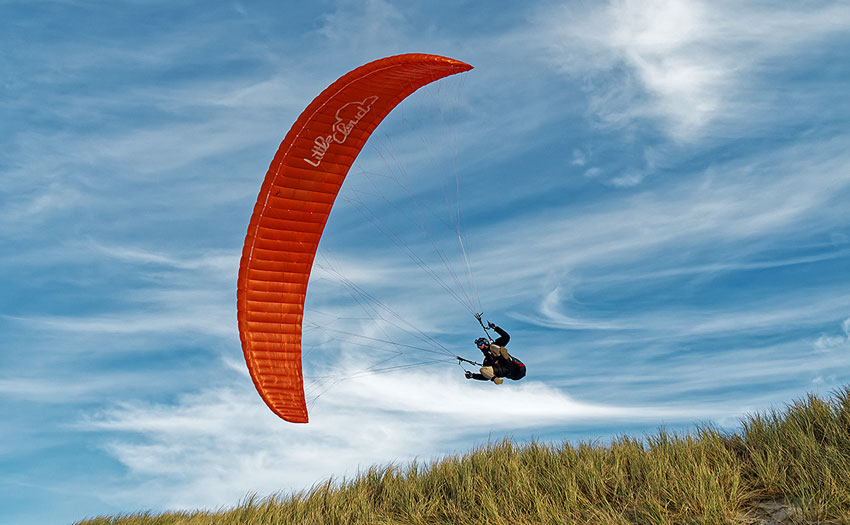 3. Let the glider fly. Because you’re flying close to the ground at high speeds, many pilots tend to brake a lot for a false sense of security. Don’t touch the brakes except for steering, it just makes you lose height. For turns, use weightshift and dynamic braking with shorter inputs and use the dive of the glider to turn. 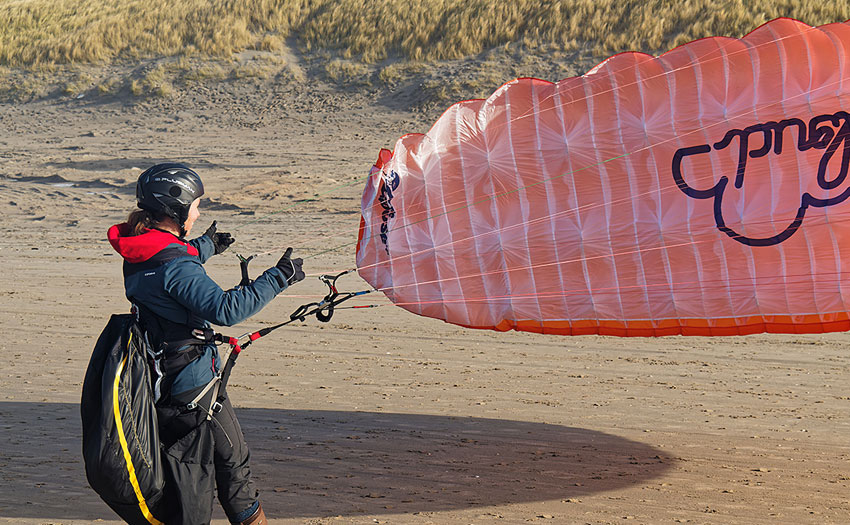 5. Weigh it down and roll it up. Bundling up your glider into a mushroom in strong wind doesn’t work. Instead of battling with the wind, pull one tip straight into wind, fold over a couple of cells and put a few handfuls of sand on it to weigh it down. You can then concertina pack it or, if it’s really strong wind, roll up the canopy from tip to centre. Take out the glider back home and let it dry thoroughly.

Max Morriën has been flying Wijk aan Zee since 1990. With his company Total Control Parakiting and instructor Jitte Jorritsma, he offers one-on-one courses for anyone from beginners, competition pilots, instructors to tandem pilots. Max flies up to 500 hours a year, including 100 hours in the mountains – the rest is soaring. He flies tandems and enjoys special projects like teaching and flying wheelchair tandems and, in one case that was followed by Dutch TV, solo.