The new GTO Light 2 is definitely more of an evolution than a revolution, but it brings some welcome extras to the original design that we were already impressed with.

When the original GTO Light was released in 2018, my colleague Hugh Miller said that “Woody Valley have nailed it [the lightweight harness with fairing] first time.” He wasn’t the only one impressed. Several brands use this harness for testing their wings and I’ve been flying one for our reviews. Having to walk to launch, for me it has been a great compromise between a full pod and super light one. After spending countless hours in it I can say that it is comfortable and practical.

In his review Hugh worried that abrasion may be a problem from your feet picking up the speed bar but my harness shows no excess wear. When Woody Valley announced a successor I was keen to try it. 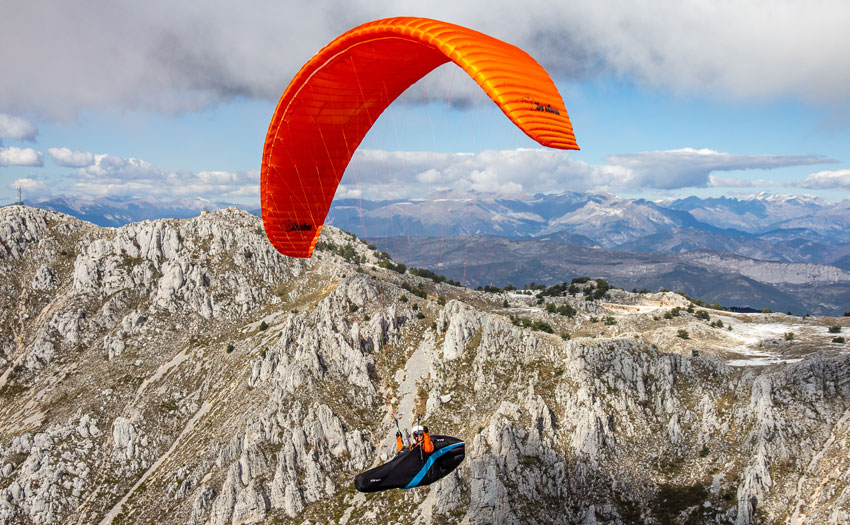 The original had quite a unique blue front to the pod, which it seems wasn’t to everyone’s taste. The company later introduced an all-black version. The new version has a more subdued design with a simple blue swoosh going up from the bottom and then along the fairing. It all looks nice and clean.

It’s not just the looks that have changed. Woody Valley are now using more robust materials too. Some pilots were sceptical about the strength of the bottom part of the pod of the original but I have to say I have been flying mine for two years with no obvious signs of wear. Woody Valley also offer an optional protector for the floor of the pod, but this adds to the weight of course.

Inside the pod, the footplate attachment remains the same as the original with one strap on each side. I had an issue with the sewing on one side, which was easily remedied with a few stitches. I do wonder why they don’t run the webbing strap around the footplate rather than sewing two short pieces on either side. It would be much stronger and the weight gain would be negligible.

Some taller pilots have said having only one attachment makes the pod feel a bit unstable, but it’s never really concerned me and I’m 193cm. The speed bar is the same three-step webbing bar as before which works fine if set up properly.

Andrea Paissan from the company told me that they took all the feedback they had received from the first generation to improve the new version. When I first saw the new pod closure system I expected it to be really fiddly, but having used the harness regularly I can say it is probably easier than before. An additional clip on the back of the instrument pod to the chest strap stops the base of it sinking so low, and allows some adjustment of the angle of the cockpit.

The biggest change is slightly hidden: Woody Valley have added an Auto Balancing System (ABS) to stabilise the harness. This can be adjusted to give varying degrees of stability. Although the changes are reasonably subtle, it definitely has an effect, and although I have never had a problem flying EN-C wings with the original, I know pilots asked for more stability and this gives you the option to fine tune it to your wing and desired feel.

The magnetic keeper on the reserve handle makes it less prone to moving around or coming off. It does, however, make it even more flush to the harness, maybe not so good in light of Matt Wilkes’s latest insight (see p34). Woody Valley are definitely not alone in fitting their semi-light harnesses with low-profile handles; maybe an alternative handle could be made available. 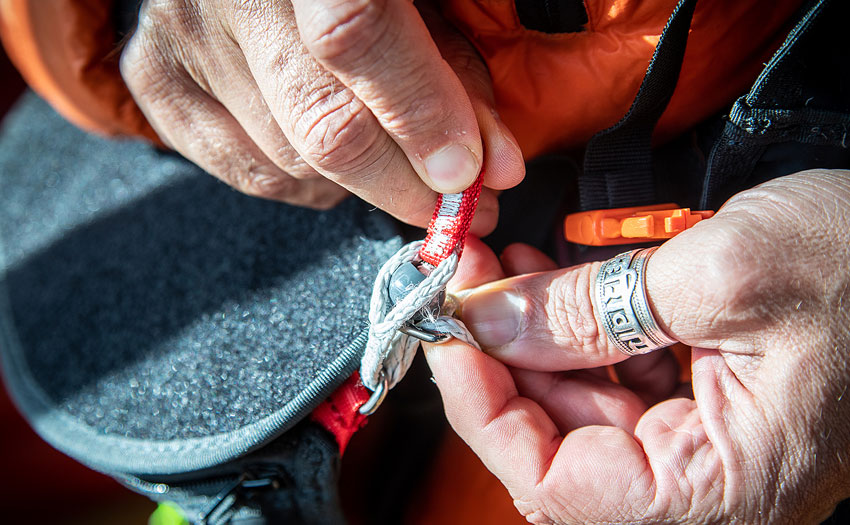 An optional inflatable protector replaces the standard foam protector. It is inflated with a tube that comes up to a Velcro keeper on the right side of the harness, and you can even inflate it in the air. The huge advantage of this is the reduced packing size; the downside is that you have to remember to inflate it, and yes I did once take off with a deflated protector.

The inflatable protector gives the harness a more hammocky feel and makes it tighter round the hips, and you may feel you lose a bit of precision. It does give you a bit more flexibility when carrying extra kit though, and it can be retrofitted to the first gen. GTO Light.

Woody Valley said they had a few requests to add a windshield to the harness. It fits into a channel in the front of the instrument panel and is secured by poppers, all very easy. Its purpose is to reduce wind flow onto the pilot’s face rather than to reduce drag. Being tall, I found the top of it went across my field of view and I wasn’t so well protected. Woody Valley told me they are thinking of making it in two sizes. Most pilots, though, will benefit from more protection, especially in winter when the air is cold.

Storage is the same as on the previous version: a large rear pocket and another under the seat. Internal pockets are designed to hold walking poles and a water bladder. There’s a channel for the drinking tube.

I used the harness on a short vol-biv trip and with careful packing was able to get everything I needed in it. Having the two pockets meant I was able to balance the load well, so the harness maintained its flying angle. I was able to slide my sleeping bag underneath the inflatable protection.

This is a great evolution of the popular original. In flight it is now possible to dial in a bit more stability, which should especially please those flying high-aspect wings. There’s a reason this harness is used by several companies’ test pilots when preparing their cross-country wings: it manages to blend the comfort of a hammock harness with most of the precision of a seat-boarded one. The changes and additions have made a great product even more tempting, more versatile and even easier to fly with daily.