2017 was my second season of XC flying and by the end I flew over 100km in the UK flatlands. The way I got there though, felt completely backwards!

I started flying three years ago. I signed up for lessons as soon as I saw first-hand people getting wings out of backpacks and gently floating away. I’d been into flight since I was a kid, and carrying your wings with you was a concept too amazing not to try.

During my first year I stuck to the hill and made my fair share of mistakes, including a tree landing. I was very lucky to come away unscathed, but I also came away wiser.

The second year was different. By this point I had developed a taste for altitude and staying up. The bottom landing field wasn’t as satisfying as it was before, and I was starting to get quite high at times, giving myself the confidence that maybe I could try to go cross country. It was something I had only read about, but I was keen and nervous to try. 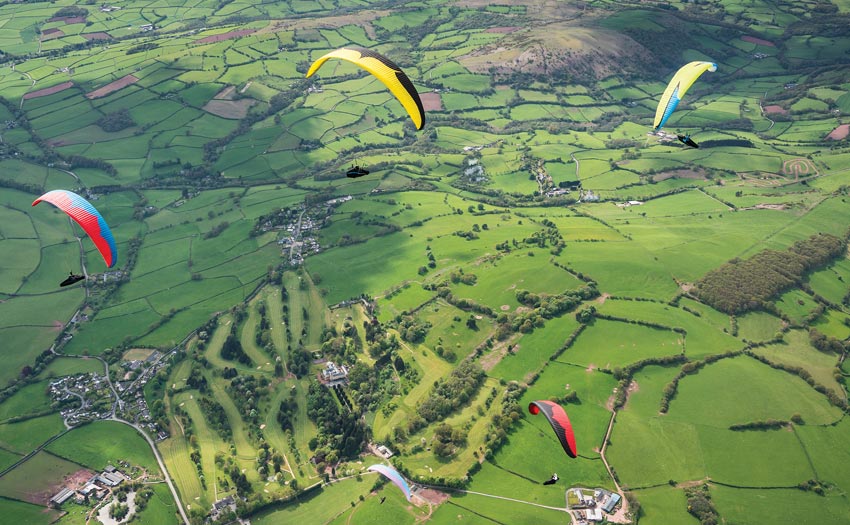 A classic day in the flatlands of England Photo: Harry Bloxham

My first XC happened very much by accident. After a few aborted attempts at a getting up, I got to cloudbase, but by that point had drifted away from the hill so much that it was safer to go with the wind rather than try to push back to the front. This was it! I was really excited that the decision had been made for me and I was now en route to my first XC.

“Ten kilometres”, I thought. But then I kept finding thermals and kept gliding away, and by the time I landed I was almost 60km away from my starting point! I was ecstatic. What a flight, what a feeling! I was instantly hooked on this idea of making distance by climbing and gliding.

A month later I even dared to set a goal at 42km away from the hill and have a go at that. Again, I didn’t think I’d ever make it but I did! It was a beautiful flight, especially because my goal was the airfield at Airways Airsports in the north of England, where I learned to fly. It was an amazing feeling to fly in from so far away and land on the ground where students were making their first paraglider flights on tow.

Even though these were the only two XC flights I made in 2016, I was over the moon. I had it! The adrenaline had gotten me thinking I was some kind of natural. What could I do next season? What new things would I discover? My excitement and ambition were at an all time high.

For the 2017 season I prepared much better. I read a lot about techniques and decision-making, got myself an XC pee, drink system and new gloves. I went to lectures on XC flying and even attended Gavin McClurg’s great mountain masterclass in England’s Lake District in April. I was primed and ready, this was going to be the season!

When the first good days started to come around I stuck to the good local pilots like velcro. I talked to them the day before, studied the weather together with them and decided on the best spots to fly. I even had different routes loaded up on my instruments to be able to navigate airspace better.

I was waking up early, just to be at the hill before it was on, so that I could pick the best spot and launch as soon as I could. Long flights start early right? That’s what the guys in Quixadá do, so surely it’s a good thing to try to fly as much of the solar window as possible.

Or so I thought.

With all of this prep and pressure I had been setting the bar, and expectations, too high. I kept bombing out at 10 or 20km. Leaving the hill without too much height, trying to keep up with people with much more experience than me and better wings, and often not even connecting with a second thermal. Not to mention I was trying to record it all on video, both on the ground and in flight. It was hard to accept that literally 30%-50% of my brain power was consumed by the simple act of having a camera on board.

I put down the first few ‘fails’ to lack of experience, or to the day, or to just not having enough attempts at it. But towards the middle of the season I was on the eight, ninth, tenth attempt, and my best was a mere 32km. It wasn’t bad for a second XC season but considering the first season and my ambitions I couldn’t help but feel deflated. 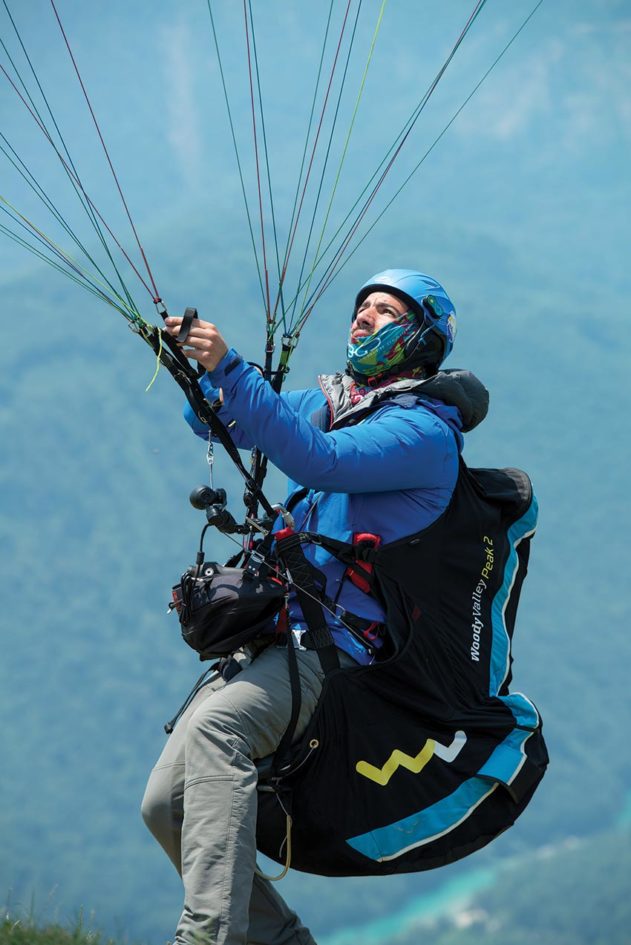 “Towards the middle of the season I was on the eight, ninth, tenth attempt, and my best was a mere 32km”. Photo: Martin Lifka

I knew something wasn’t right. I wasn’t achieving my objectives, but even worse I wasn’t even enjoying flying anymore. I was dreading it. I wanted to go out for the hunt but not for the joy, and that was just wrong.

So I dropped it all. I dropped the dream of flying a big XC. I dropped looking at the weather all the time. I dropped the camera. I dropped following people and even dropped waking up early and stressing the night before. I really like sleeping!

That was it, my season was finished and I was resigned and humbled by finding out yet again that I’m not superman. You can work as hard as you like at it, but it won’t just come when you want it to.

So I started flying without the camera, without the ambition and without the stress. I just woke up whatever time I felt like.  I passed on quite a few good days because I just wasn’t up for it. On other days I went flying and didn’t even take my cockpit, just flew the hill, low, playing with the grass and enjoying summer.

And then a day came where it was looking good. I didn’t realise it was a good day until I woke up, after 11am, and there was a lot of chat on our flying app. I took my time, picked up my stuff and headed out.

When I got to the hill it wasn’t very busy, and I heard that a lot of pilots had left already. I launched and said to myself that I’d only have a play around. I got to cloudbase above the hill at well past 2pm and thought, “I can’t go very far this late”. So at a relaxed pace I just went downwind, taking every climb like it was the last one, because I actually thought it would be the last one. 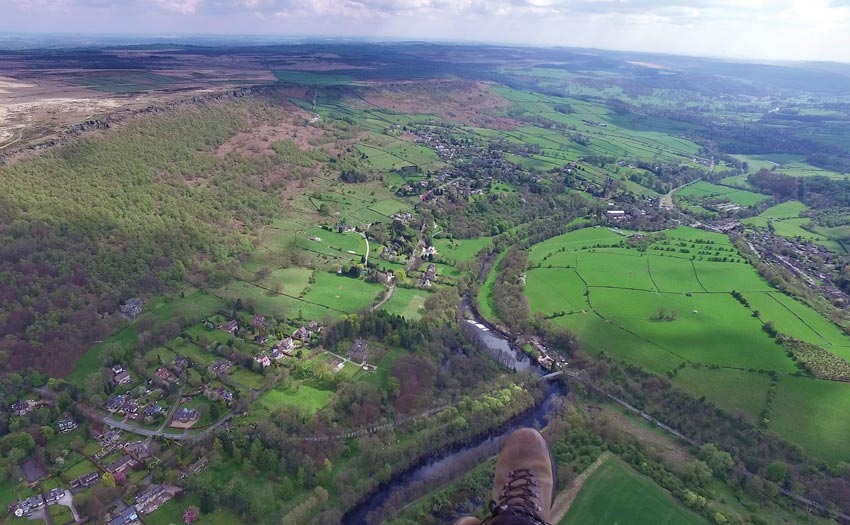 “I didn’t try any more for the rest of the season. I was happy with what I had. Except…” Photo: Andre Ferreira

Quite a lot of hanging at cloudbase later I found myself further downwind than I’ve ever been, and having to navigate unexpected airspace! Some bad decisions there put me on the deck but I couldn’t believe how fast and how easily the distance came when you’re looking at the clouds and trying to stay up rather than looking at your instrument. I landed at 91km and was really chuffed with it.

That was it. The season didn’t turn out bad at all in the end! I was really happy to have beaten my personal best and to have learnt something. I didn’t try any more for the rest of the season. I was happy with what I had.

Except that wasn’t it…

More than a month later a day came that looked very similar. I woke up late, realised it was good, dragged myself to the hill half prepared half not and most of the good pilots had left already. There was one difference though. I was curious about trying a different glider, an EN-C, the Cure from BGD.

This was my first flight with it so I was cautious. I played with it a bit before take-off and loved the direct response and shorter brake travel than I had been used to on the Base (high EN-B). Even though this was nice I was wary about the brake travel, and I kept that something in mind.

The flight felt like a carbon-copy of the previous one. I got to cloudbase coming on 2pm, prioritised altitude over distance and the kilometres came. I genuinely believed I would be going down at any minute. From the start I just wanted to stay up as long as possible because I thought it would be such a short flight.

In actual fact though, I pretty much broke all my personal bests again: Distance (128km), duration (4h50m) and altitude gain (1,500m). I even managed to successfully avoid airspace and landed some 10km short of the east coast, landing at 6pm in the headwind of a sea breeze. On landing I had the same feeling as the previous flight: “What the hell just happened? How did I get here?!”

I’m sure there are as many ways to break 100km as there are pilots, and many are keen to tell you what you’re doing wrong or that you can get there if you do “X”. But at the end of the day, the biggest lesson I took from that flight was, 99km or 101km, if you’re enjoying yourself you can’t go wrong.