Sebastien Kayrouz has set a new US paragliding record with a stunning 500km flight through Texas.

What’s more, he foot-launched from a small hill in the south of the state, rather than launching by winch – and was flying a three-line Ozone Mantra 7 (EN D), not a CCC two-liner.

Sebastien launched from the south side of Caprock Mountain (695m), near Camp Wood, Texas, and was in the air for nearly 10 hours. He flew almost due north, taking advantage of a convergence line that set up between prevailing westerlies and a storm coming in from the south east.

His 507km (OLC) flight on 7 June, just shy of midsummer’s day on 21 June, also took advantage of the most amount of daylight in the year. 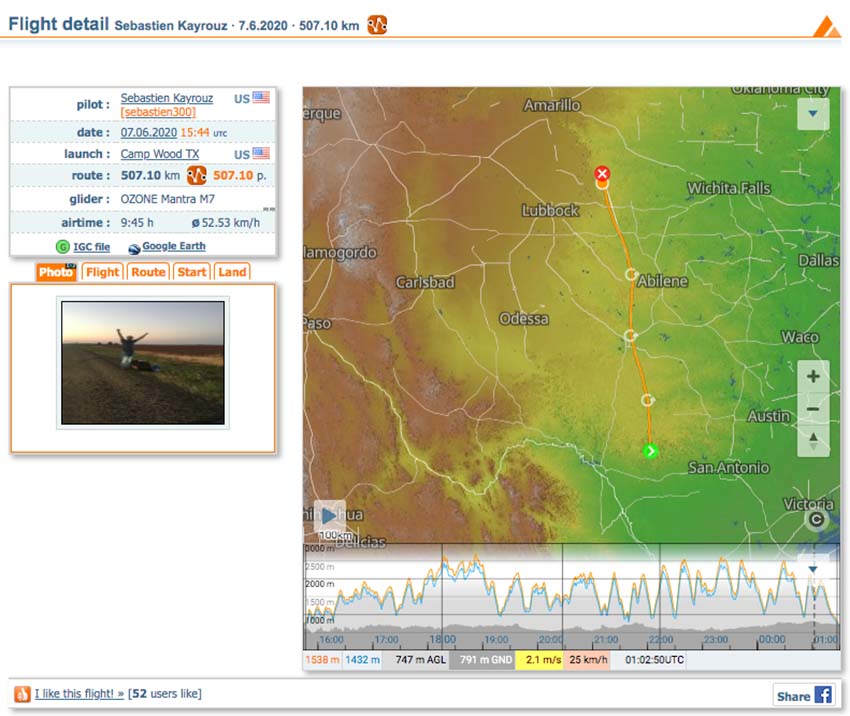 Texas is famous for flatland open distance world records in both hang gliding and paragliding.

The longest paragliding flight in the US before Seb’s was 463km, set by Luc Armant on 2 July 2014 on an Ozone record hunting tow camp.

Pilots from around the world have been quick to congratulate Seb’s 507km flight – the first 500km paraglider flight in the USA.

Texas is expected to be the next big hunting ground for the paragliding world record. Current world record holder Rafael Saladini thinks 600km is the limit in Brazil.

Last year, after setting the world record at 588km from Tacima, Brazil with Marcelo Prieto and Rafael de Moraes Barros he told us: “Australia, South Africa and Texas, they have 14 hours of sun, compared to 12 in Brazil. We believe Texas is the one.”

Sebastien has submitted his flight to the FAI to claim for two North American records: Free distance using up to 3 turnpoints and Straight Distance. The FAI distance is 503km. This differs slightly from the online contest distance of 507km because of the way the point-to-point distance is calculated (FAI is stricter).