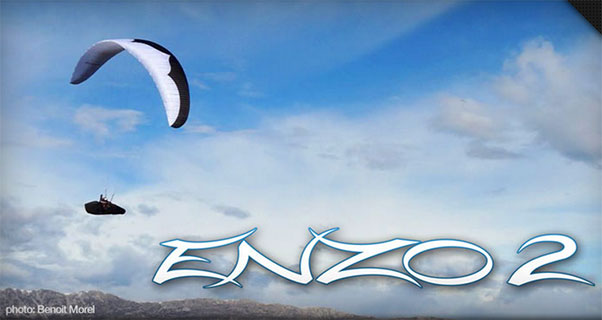 Ozone has published an apology to “all pilots and specifically Enzo 2 pilots” on their website and have offered a “full refund” for Enzo 2 pilots if they want it.

In the apology Ozone admit that they changed the production Enzo 2 from the Enzo 2 originally certified and say this was a “mistake”.

They say, “It was a mistake to push the frame so much without prior checks of how our interpretation would be accepted” and add, “we did make a mistake, we went too far, and we apologise unreservedly for that.”

They also recognise the damage done to their reputation and to the sport. “We have to work hard to repair the damage we have done in the competition world and generally to our pilots.”

The apology, published late on Monday 17 February, is signed by Mike Cavanagh, boss of Ozone. He asks pilots who have suffered a loss of points in competition because of ‘Enzogate’ to get in touch with him directly by email.

He also says that Ozone are “working to get the Enzo 2 position clarified for competition”. Although the statement is not explicit, that almost certainly means Ozone will try to get the Enzo 2.1 certified EN D.

The statement reads in full:

To All It May Concern,

I apologise wholeheartedly for the upset we have caused to all pilots, and specifically Enzo 2 pilots. I and the Ozone team understand that many are angry and we will do everything we can to resolve the trouble we have created.

Our aim was always to produce the nicest Enzo 2 we could for all Ozone competition pilots, within the EN frame. But it was a mistake to push the frame so much without prior checks of how our interpretation would be accepted. Within the EN the manufacturers set the tolerances except for the lines and risers, so we believed the Enzo 2 conformed. Any differences were within the tolerances that our testing of the Enzo 2 had indicated were acceptable.

That all being said, we did make a mistake, we went too far, and we apologise unreservedly for that and we accept we have to work hard to repair the damage we have done in the competition world and generally to our pilots.

We are still working to get the Enzo 2 position clarified for competition, but any Enzo 2 pilot who is unhappy should contact their dealer and we will arrange a full refund as a matter of goodwill. Also, however much you might like the wing we are sorry for the hassles you have endured and ask that any that have directly suffered as a result of losing competition results should also contact me directly here: mike@flyozone.com

Mike, and the Ozone Team

Separately, in an email to dealers and industry contacts Ozone said 2014 had not “started as we hoped” and added, “We are sorry to all of you, and all Enzo 2 pilots”. They also make clear that “the issues do not affect any of our other wings”.

That email reads in full:

For those of you have been involved with the competition side of Ozone, we have been heavily distracted by the Enzo 2 and I have just written an apology on flyozone.com news. We are sorry to all of you, and all Enzo 2 pilots, for any problems caused, and rest assured, we are still working hard to resolve the issues. Please read the news on flyozone.com so you can prepare for any Enzo 2 pilots that may contact you. The issues involved do not affect any of our other wings.

The Rush 4 and the other sizes of the M6 have been delayed due to very poor weather and the Enzo 2 issues. We are working hard on both new wings and hope that sizes of one or both of them can be finished for certification this week. Unfortunately it is never an exact science due to the weather, but rest assure we are working hard to finish them all. We will update you with more news as we have it.

That is all for now, except to hope that the rest of 2014 goes better than it has started, and we all get to enjoy some flying soon.

Within the industry other manufacturers have been almost unanimous in their condemnation of Ozone’s actions with the Paraglider Manufacturers’ Association sacking Mike Cavanagh from its board and expressing its collective “disapproval” in a statement published on its website earlier in February.

A previous, more strongly worded statement was withdrawn by the PMA. The resulting in-fighting between manufacturers has caused PMA founding member Skywalk to leave. U-Turn have also left the PMA. Other members of the PMA are calling for Ozone to be expelled.