Big climbs, yes, high altitude to be expected, booming conditions all in a day’s work – but raging forest fires and flying through a smoke-filled sky on the practice day is a new one for our blogger Craig Morgan at the Sun Valley PWC this week… 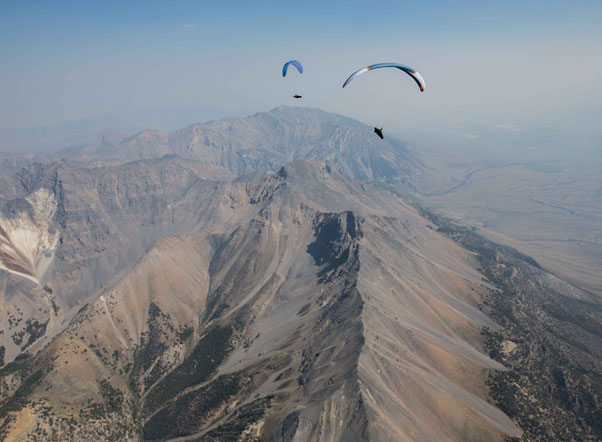 King Mountain it was today then as the fire fighters continued to battle the inferno. Airborne tankers were being deployed as we left and flame retardant liquids were being dropped in an attempt to get this burning puppy under control. Good luck on that one chaps – we’re just off flying in the next valley over….

An hour-and-a-half drive with the advice to drive slowly through the towns and, “as fast as the hire car will go on the open roads” was the advice – nice!

Past the Craters of the Moon National Park where strange, lava-like swathes had erupted into shattered rock carpets that bulge and heave like icebergs on a frozen landscape. Through worryingly isolated one horse towns and on into the wilderness. And then we were there. A dust track to launch harbouring beneath the mighty King Mountain. 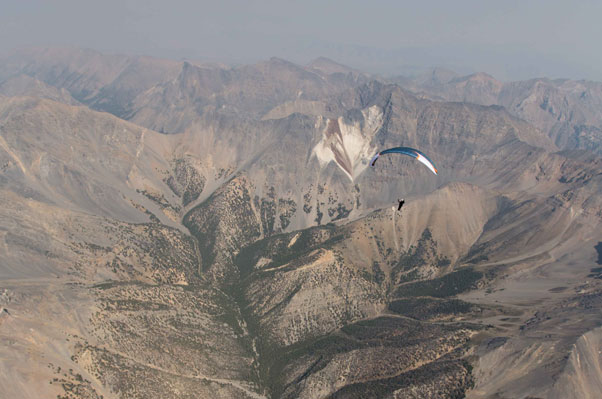 Nate Scales, local guru, coolly suggested we cruise 50 miles north and 50 miles back over a couple of valley crossings and up towards Mt Borah, the highest peak in the county, along the “super rad” ridges and peaks. And so it was. Monumental scenery – just like the Dormillouse in France I thought. But I spurned the opportunity for photography as the conditions developed into a somewhat boisterous battle between me, my Enzo and the rather sporty surrounding air mass!

The fires that were burning elsewhere in the county had the unwelcome effect of blanketing everywhere in smog-like smoke – you know, like a proper thick inversion. Visibility was trashed and you could just make out the ground from altitude but were constantly surprised by mountains looming out of the murk to change our direction. 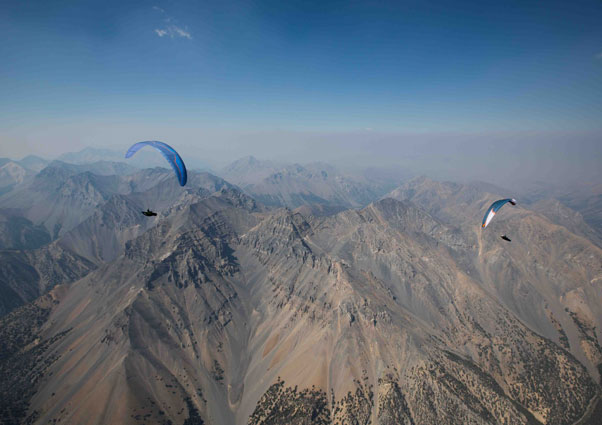 Craig, on the blue glider, thinking of adjectives to describe the conditions in Sun Valley. Photo: Nick Greece

Idaho is up on the high planes and take off was at about 2,200m. At 4,000m things cooled somewhat and at 5,000m most pilots left their climbs as the horizontal viz had returned and it was getting decidedly parky (cold). 10-ups were reported by Emile but I never got beyond 6-up and fought most of the ascents all the way with brutal hard edges and layers of chop. How we are gonna race in conditions like those will be interesting! But all 30 of us Brits, Colombians, Yanks, Frogs, Swissies, Ruski Russians and others made it down safely.

Tomorrow is suggested that we will go up the Gondola of Sun Valley as the forestry/fire people have allowed us a corridor in which to fly. Possibly a flight through the boonies back to King which would challenge most brave hearts…

More pics to come when I’m not so scared!!! 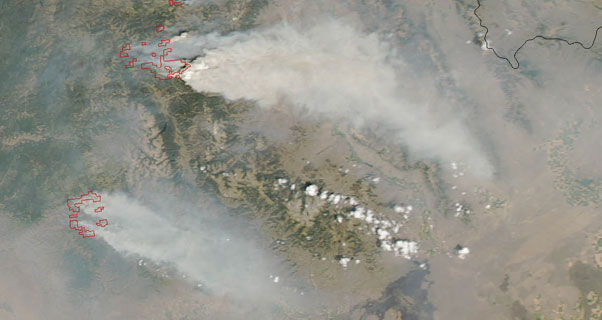 Smoke streams east from wildfires in Idaho, photographed by NASA on 14 August

The US forestry dept have over the years developed a strategy to let non-threatening forest fires burn out naturally. For decades they have fought these fires with huge commitment from personnel and equipment. Through post-burn analysis they have discovered that these fires are a natural process in the eco systems and a positive event in a forest’s life.

Previously, by not allowing fires to cleanse a forest huge amounts of fuel were stored up in the form of mature trees. Consequently, when a fire did take hold, the intensity, heat and destructive powers became catastrophic, not only to the forests but to the surrounding civilisation.

Now the method, when appropriate and safe, is to let them burn to clear the deadwood and brush to allow for new growth. The Firs generally at the heart of the woodlands have a natural ability to withstand ‘normal’ fires when confined to ‘brush burns’ and so the fire’s cleansing effect keeps a forest in good order.

More on the wildfires in Idaho

Flying map of the area