Craig Morgan is back, blogging from the Paragliding World Cup in Sun Valley U-S-A. Craig, a former British Paragliding Champion and long-time British Team member, races with the big guns and leads from the front – and then tells us all about it here in glorious technicolour. Hang on to your stetsons as he takes us for a ride through America’s Wild West at one of the most-anticipated comps of the year. He”ll be blogging here every day during the comp, from 19-25 August, so check back soon…. 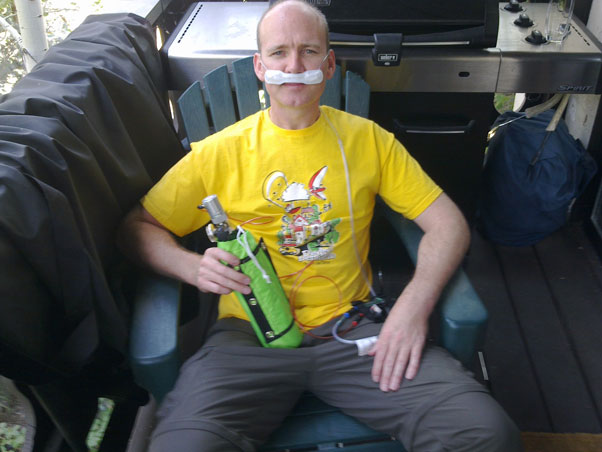 So far our jaunt across the pond has gone well with only a slight glitch arriving into The Mile High city of Denver late. You have to love the passenger orientated service provided by United Airlines when they hold the connection to Boise for five UK paraglider pilots by 20 minutes and make sure their gliders are safely transferred between planes too.

The next day was spent catching up with our American hosts, sorting out tri band telecommunications for retrieval purposes and ordering up supersize portions of American food. Wattsie’s frustration nearly overflowed as early as breakfast when after intense interrogation regarding how he’d like his eggs, hash or fries, rye or brown, syrup or honey, milk or black, tomatoes or mushrooms he just asked if he could have a ‘normal breakfast please’ and our Hispanic host gave him a confused look!

Later we played with our O2 systems having picked them up from Mike Pfau our convivial meet director who’d explained their use and value once flying above 18,000 ft! A lumpy bit of kit weighing in at around 3kilo but one that will no doubt come in handy if and when we get that high.

So, easing into the LZ where we’d planned to meet up with the local school and catch a ride up the hill for a cruisy evening flight we were hit with the bad news. America was indeed burning. We were aware that seven bush fires were carbonising large forestry areas of North Western America somewhere in the not too close vicinity. So large in fact that the forestry services were just letting them burn as they were unfightable and unthreatening – so far.

However, on the 5th year anniversary of a huge fire that had burned 10 miles to the North of Sun Valley another inferno had taken grip and was now looking ominous. The forestry authority had imposed a TFR – temporary flying restriction and the paragliding school had been grounded – and that meant us too!

Unlike the other fires though this one was proximal to some very wealthy inhabitants of the select ski resort of Sun Valley and the local Senators weren’t about to let their friend’s expensive real estate take a singe! So a huge task force of fire fighters had been mobilised and are currently trying to ‘knock it down’.

On their side is the fact that the fire five years ago took a lot of the combustible material out so theres only five years of growth to fuel the fire presently. A local Red -neck has been blamed for stacking his ATV and starting the fire and all the locals and travelling PWC pilots wish him the best with his insurance claim!!!

Anyway we await their progress this morning and have a fall back situation where we could travel and hour and a half to King Mtn and fly from there today. So without more speculation we’ll grab a cup of coffee, head out and catch the latest scoop.

Flying map of the area