Trail runner Andy Symonds completed 16,976m of total ascent on 14-15 May, in a 24-hour hike-and-fly challenge in the French Alps.

Andy, who is a world-class trail runner, chose the same Vertical Kilometre route as Tanguy Renaud-Goud used for his record in June 2021. The Grand Serre climbs 1,000m up in less than 2km horizontally, making it one of the fastest vertical-kilometre routes in the world.

Andy obtained special permission to fly at night so he had a full 24 hours for his challenge in which he completed 16 ascents of the Grand Serre, 16,697m total. The date he chose coincided with a full moon.

Tanguy Renaud-Goud did all his flying in daylight hours around midsummer last year. He started hiking at 1am for a first flight from the Taillefer at 5am (2,500m ascent), followed by 11 ascents of the Grand Serre. He finished at 21:30 having ticked off 13,390m ascent in 20.5 hours.

Andy started around 12pm on 14 May 2022, using an XXlite 2 (16), Ozone’s 1.3kg single-surface wing and an F*Lite harness. He benefitted from flyable conditions for the first 15 ascents, but arrived on top the last time to find strong winds, so his legs had to endure the 1,000m descent at the end of it all.

On his blog, Andy reported: “I was extremely lucky to have so many factors align for the weekend. I’d got the permit, but it wasn’t flexible. The full moon wasn’t going to hang around for the following weekend either. The forecast on Sunday was touch and go, so last minute I pulled the start forward by six hours, to start midday Saturday.”

He wrote that the hardest part of the challenge came during the middle of the night. “It’s always the middle bit of these long, silly challenges which are hard, mainly mentally, as the muscular wear and tear starts to creep in, yet you’re aware that there’s still an awful long way to go.

“I listened to a bit of music for a couple of lonely climbs in the night, and observed the insect life taking over the forest floor, but mainly just the thrill of knowing where I was going and what I was doing, and the whole uniqueness of it all, made the adventure quite a pleasant one!”

To save weight Andy flew without a reserve and also without a helmet. He told us it was a considered decision: “I was flying in relatively simple conditions, not big thermals or complicated winds, and the take off and landing areas were nice and smooth and grassy – very few rocks or other obstacles. So this combined with the weight and ease of transport meant that I felt more comfortable without a helmet.”

On the fact he had to hike down rather than fly in his last lap, he wrote: “It was a slightly frustrating way to finish, but all things considered – everything else went perfectly, so no complaints! I guess it just means that the record is beatable, and maybe I’ll have to have another go, one day!” 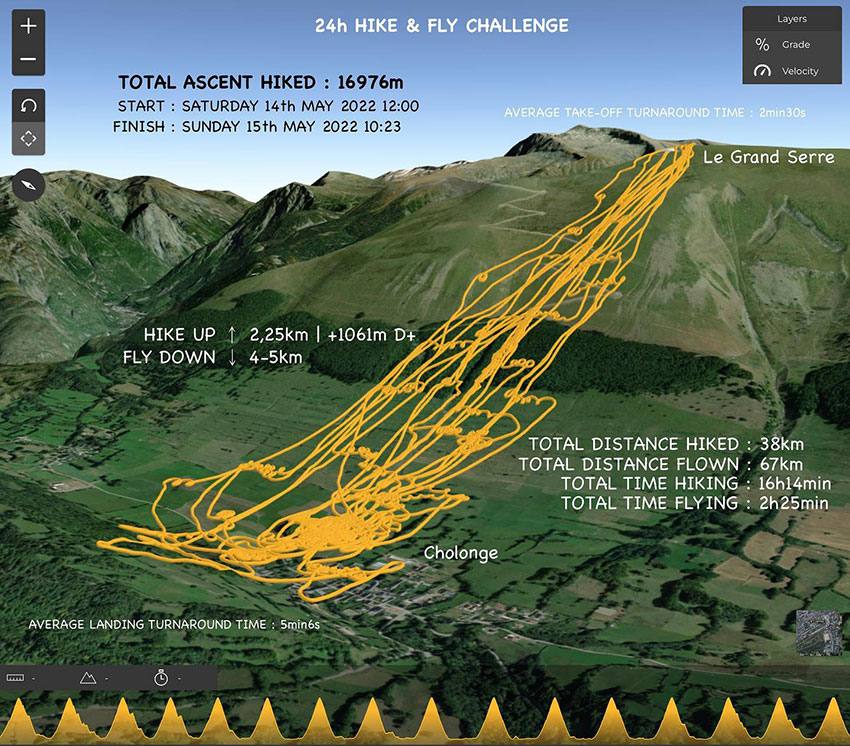