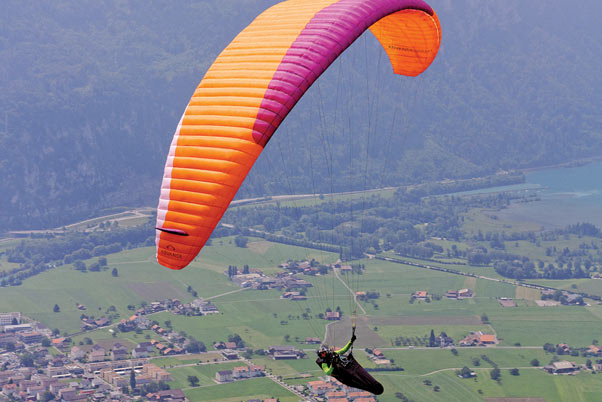 Pat on the Sigma 9 flying near Interlaken. Advance HQ is near here and the glider development team of six fly every day they can when working on a glider. Photo: Marcus King

The Finished Article : Pat Dower heads to Switzerland to fly the new Sigma 9 and meet the team behind the glider.

I love it when a plan comes together. For the Sigma 9, I was able to combine pieces of work and travel to the Advance head office in the Swiss town of Thun with one of the other reviewers (Marcus King) and editor Ed. Advance’s head of sales Valéry Chapuis arranged for us to have access to several of the key players in the R&D team so that we could discuss the concept and development of the Sigma 9 as well as go flying with them. 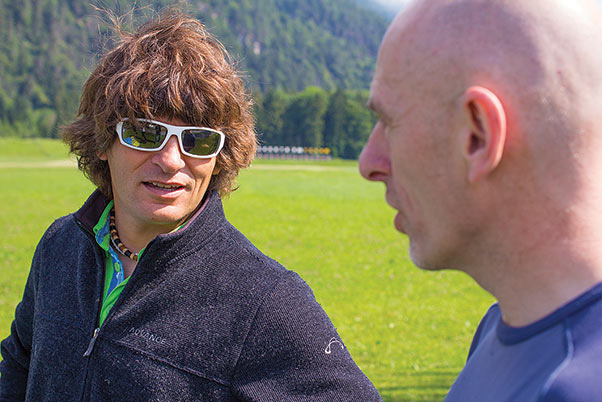 Every new generation of an Advance glider starts with a blank sheet of paper rather than being based on the previous model. A design mandate states the aims for the glider (see side bar). Clearly this glider is very important to Advance and it is impossible not to be impressed with the effort that has gone in. Two ex-European Champions, Kari Eisenhut and Greg Blondeau, are part of the six-man R&D team. Sophisticated design software developed by Hannes Papesh (ex-Nova) was used to test a huge range of design ideas by Advance’s Silas Bosco.

With an acro background, Silas knows a thing or two about flying a glider as well as designing one. The team flew the development versions of the Sigma 9 in all possible conditions and situations from tailwind take-offs from a glacier, through banging XC days and even some acro; all aimed at making sure that no weaknesses remained uncorrected. Eventually after 24 prototypes, Kari made the pronouncement – the Sigma 9 is finished! 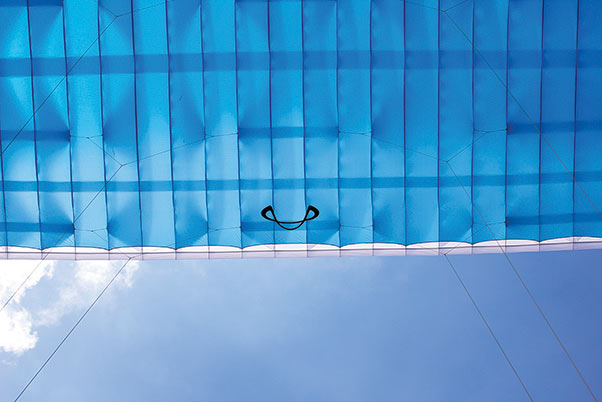 The line arrangement sees three risers, with D-lines branching off from the upper C-lines. Advance say this maintains the shape of the glider better when the brakes are applied, giving a better feeling and less drag. The overall approach is one of lightness and simplicity. Photo: Marcus King

Light crosswind conditions greeted me for my first flight from Möntschelealp above Thun. Glider preparation was limited to a rough lay out and line check. However with a few backwards steps the glider climbed easily overhead. It is testament to the glider that all four of the Sigma  9s present launched perfectly including two of us who had never flown the glider before. All our other launches in Switzerland were forward launches including one with a light tailwind. None were even close to being fluffed. Back in the UK I discovered just how calmly the Sigma 9 rises from the ground in strong winds. There are no weaknesses; it handles the full range of launch conditions with ease.

In the air, from the first turn I was immediately struck by the very direct feel of the brakes and the immediate response in roll. I had to check that the brakes on the demo glider had not been set too short such was the feel and immediate turn in the first few centimetres of brake input. The brake length was fine; it makes you feel really connected to the trailing edge. Pilots flying a Sigma 8 and particularly a Sigma 7 will be amazed at the improved agility.

Now here is a paradox: even though the Sigma 9 responds to small brake inputs, the amount of brake needed for thermalling is comparable to others in the same class and it is really tolerant of deep brake. I really abused the brake travel when squeezing into a tight landing spot and the glider refused to go parachutal or threaten to drop into stall. The Sigma 9 allows you margins.
Feedback and control

Every unfamiliar glider we fly gives its own sensations. Some sensations hit us immediately and yet quickly fade into the background. Others remain a genuine part of the character. In the case of the Sigma 9 a sensation that hit Marcus and me, in the sharp-edged morning thermals, was that there was a lot of feedback. As the flight progressed, that initial impression disappeared and the overwhelming feeling of a balanced, accessible cross country glider came through.

I had been trying a wide chest strap setting on a different glider but returning to the recommended 45cm between the karabiners suited the Sigma 9 much better. More of the feedback comes through the risers than the brakes. Part of the secure Sigma 9 feeling is achieved through modest aspect ratio and its high pitch damping. Too much damping in pitch can sometimes make for a dull glider or one which gets knocked backwards by strong surges of lift. Whilst I did see a lightly loaded Sigma 9 pitch backwards a little, the effect for me at two-thirds of the way up the weight range was barely noticeable. Such is the glider’s ability to quickly settle into the lift and carve a nice banked turn; I was unable to resist the temptation of turning inside other pilots to hook a core, smiling all the time. 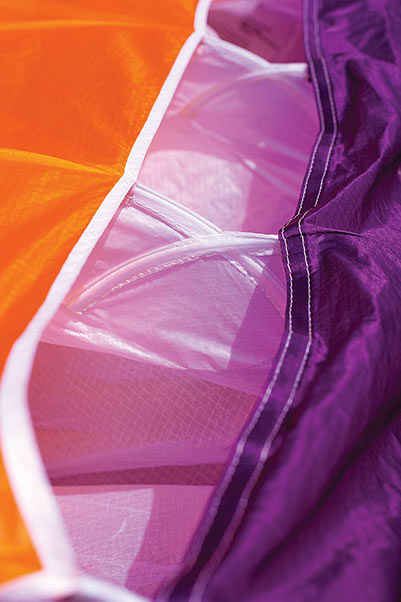 The Sigma’s shark nose is called an air scoop, but it does the same thing –increases stability at speed.
Photo: Marcus King

On my second flight, the very low cloudbase meant that a transition from Amisbüel to Luigiwald had me arrive halfway down the ridge in some weak valley flow. Now it was time for close in scratching and efficient turns. I wasn’t sure I would climb but crept up slowly but surely. With a bit more height I was happy to follow the sun into a leeside bowl. I was really nicely surprised by a strong forward pull towards the waiting thermal and to use the agile, precise, yet undemanding part of the Sigma 9’s character to climb out. The pull towards even quite weak thermals is a real bonus for an XC pilot who wants to be sensitive to all the messages from the air. There is some dark design art at work here, if you ask me! 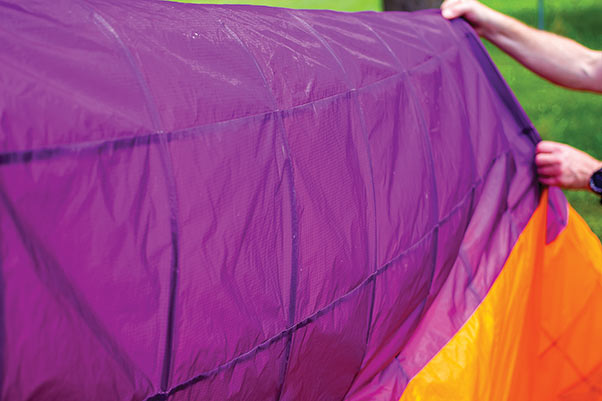 The shaping of separate panels on the leading edge and careful orientation of the weave of the cloths helps to keep the front of the glider free from wrinkles and carries load forces efficiently. Photo: Marcus King

Back in the UK the air was playing tricks; was it thermals or was it wave? One thing was for sure I had good fun getting respectably close to matching a World Cup pilot on his competition EN D, especially when I was more relaxed than him at speed through the turbulence.

Using full bar to catch up with another Sigma 9 being flown at trim, lost almost no height; the polar is nearly as flat as a Canadian prairie all the way up to the top speed. The smooth and light, two-geared speed system can be set up so that all pilots can get full speed regardless of their leg length. The Speed Performance Indicator on the risers encourages pilots to accelerate the glider when headwind, sink or climb strength dictates. For the intermediate cross country pilot who is reluctant to use the speed bar – if the Sigma 9 doesn’t get you using the polar properly, maybe nothing will!

Flying cross country with good pilots on a Mantra 6, and a Delta 2 put the Sigma 9 in its element. No one could open up an advantage so it confirmed to me the Sigma 9’s ability to perform. I am not sure the Sigma 9 out-glides its peers; as ever it is hard to separate the gliders, but the usability in cross country conditions is magnificent. Comparing the character with other gliders in the sports cross country class such as the Delta 2, the Carerra and the Cayenne 4, the Sigma 9 has the lowest workload/stress. For many pilots that will translate into higher performance. 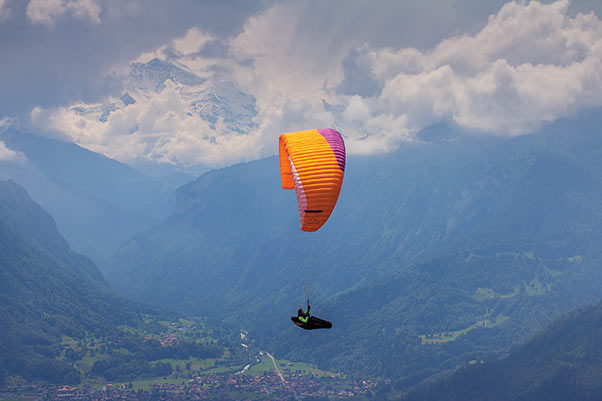 I always find it interesting to learn how manufacturers solve the challenge to design a new generation of glider. The Sigma 9 has a mix of long established ideas and latest thinking, but not all of the hot fashionable features have found their way onto the glider.

The leading edge has an “air scoops;” recognisable as a variation on the “shark nose” theme. The shaping of separate panels on the leading edge and the careful orientation of the weave of the cloths help to make the front of the glider free from wrinkles and carry the load forces in the most efficient way.

At under 5kg for the 25, the Sigma 9 is lighter than its peers. This is achieved through simplicity rather than use of fragile materials. All the lines are unsheathed except the bottom 1.5m of the brake line.

A ceramic ring replaces the traditional pulley for the brake line (also see Nova Ion 3 review in Cross Country issue 153): lovely! The trailing edge on the Sigma 9 looks sharp which cuts drag and makes the brakes lighter. Interestingly there are no mini-ribs since Advance found that there is no benefit when the trailing edge is optimised in other ways. Another small surprise is the line arrangement: there are actually some branches from the uppermost junction of the C lines to create a row of eight D lines on each side. 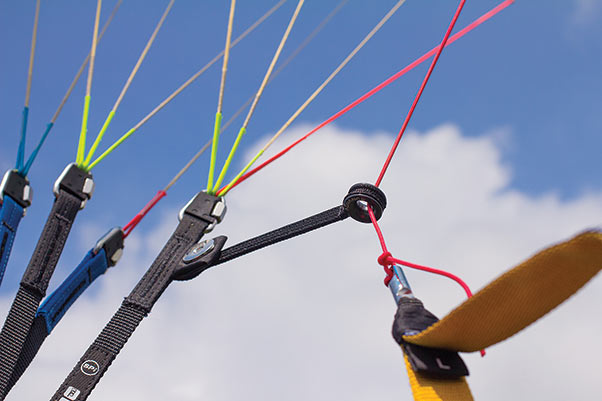 Although it only adds a little to the overall line consumption, I wanted to find out why. Silas explained that it maintains the shape of the glider better when the brakes are applied, giving a better feeling and less drag. Extra plastic reinforcement is another solution which Advance rejected in their quest for lightness and simplicity.

In addition, collapse behaviour/safety is better and is why most manufacturers use three-liners as opposed to two-liners for their X-Alps competition gliders. The Sigma 9’s relatively low aspect ratio may lack the racey look of some of its slithery rivals, but the glider will look after its pilot well when the air gets sporty.

I almost forgot to mention the build quality and attention to detail in the design; such is the longstanding reputation that Advance has in this area. An Advance glider is a thing of beauty. A few manufacturers come close, but you always find a blemish or a detail that has not been fully thought through. Not so with Advance; the Sigma 9 is simply exquisite. This even extends to the rucksack – because it is quite simply the best on the market for most pilots’ needs. I see more and more gliders from other manufacturers being carried in Advance bags.

The Sigma 9 grabbed me instantly. The precision, agility and very useable cross country ability hit the spot. I was reminded of sipping a fine, chilled white wine: crisp and refreshing yet sophisticated. I could fly like a world champion: cork-screwing up in strong cores; milking the weak stuff; mashing the bar into a turbulent headwind. The Sigma 9 is a very realistic choice for pilots who are new to EN C. Even though my personal glider is a competition EN D model, I found the Sigma 9 an extremely satisfying glider to fly. I found myself wondering more than once – why do I put myself through the stress of flying a two-liner? 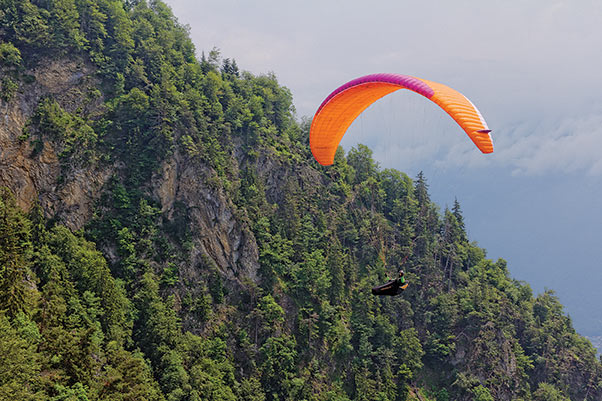 The legendary Advance workmanship is apparent in every stitch of this glider.Photo: Marcus King