Max Berger, 50, is well known as a mountaineer in his home country of Austria. His countless expeditions have taken him to the world’s most remote places as a climber and latterly as a guide for other climbers. In July he attempted a hike-and-fly of the most extreme kind – climbing and flying from K2 without supplementary oxygen.

Max lives and works in Grünau, Upper Austria. He has climbed since childhood – his father was a mountain guide – and lives and breathes the sport. A qualified mountain guide he also works as country manager for Petzl, the climbing gear manufacturer. 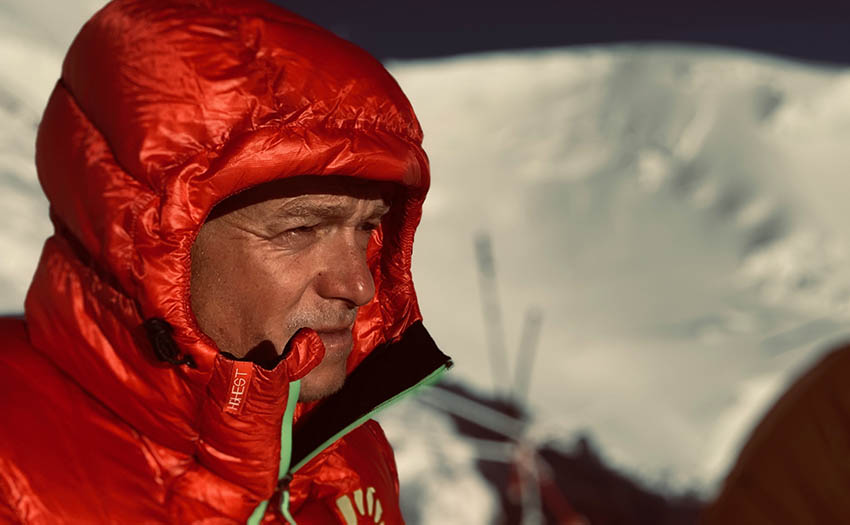 In July he led his first commercial expeditions to the giant peaks of the Karakoram, guiding clients on Broad Peak (8,047m) and the second highest mountain in the world, K2 (8,611m). While Broad Peak is considered an “accessible” 8,000m mountain for climbers, K2 has a reputation as the most technical – and potentially deadly. Unlike Everest, which sees dozens of commercial expeditions and hundreds of guided clients each season, K2 is far less crowded.

After successfully climbing Broad Peak Max flew down from Camp 3 at 7,100m. He used a Dudek Run&Fly, which weighs less than 1kg. After Broad Peak he attempted K2, but his party turned back at 8,400m due to avalanche risk. Before turning back three avalanches had been triggered and two people were hurt.

With the summit off the agenda Max took the quick way down. Launching from a shoulder on the mountain at 8,000m he flew down to base camp at about 5,000m in 17 minutes. 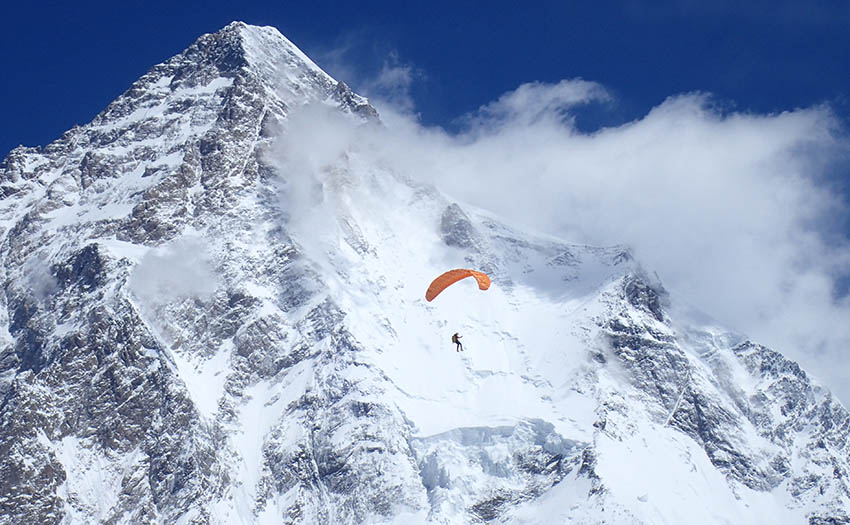 Max Berger in front of K2

“I had my earliest contact with paragliders when the first wings came onto the market,” he told me, once safely back in Austria. “That must have been in the mid-80s. I flew for a few years, but then let it go. Ten years ago I started flying again, and since then I fly an average of three or four flights a week, whenever I have time.”

Climbing the mountain was the main point for Max, with the possibility of flying down only secondary. “My first thought was to climb K2, and only later did I get the idea to fly from the summit.”

He explained, “Actually, I’m not a big fan of 8,000m expeditions. They are overcrowded and having so many people on the mountain can pose a major security risk. If someone triggers an avalanche it can kill a lot of people very quickly.”

But K2 was different. It had been in his mind for 30 years, and he wanted to do it a pure way, without oxygen. But he is experienced enough to know that nothing comes easy. “I thought if it wasn’t possible to make the summit on the mountain I would just go down with the others.”

In high altitude mountaineering every gram counts. During Max’s planning phase the Run&Fly came to market. It doesn’t get any lighter than a paraglider that is measured in grams, not kilos, so Max opted for the Dudek wing.

He used a newly developed harness from Petzl for both climbing and the flying. “It’s technically not allowed, but it meant I did not have to pack both my climbing harness and paragliding harness,” he said, “and it worked well!”

He explained: “I got the glider in March and over the next two months completed about 30 flights on it to build up enough confidence for the flight.”

The climb from base camp was planned to take three days. Three climbers, three Sherpa guides and Max, the expedition leader. “Actually, someone else was meant to lead but he was sick,” Max explained. “So I jumped in.”

Weather forecasting in the area and at altitude is not reliable, so the group was in near constant contact with the Central Institute for Meteorology and Geodynamics in Innsbruck. The plan evolved: climb to the summit, then fly off if he could. 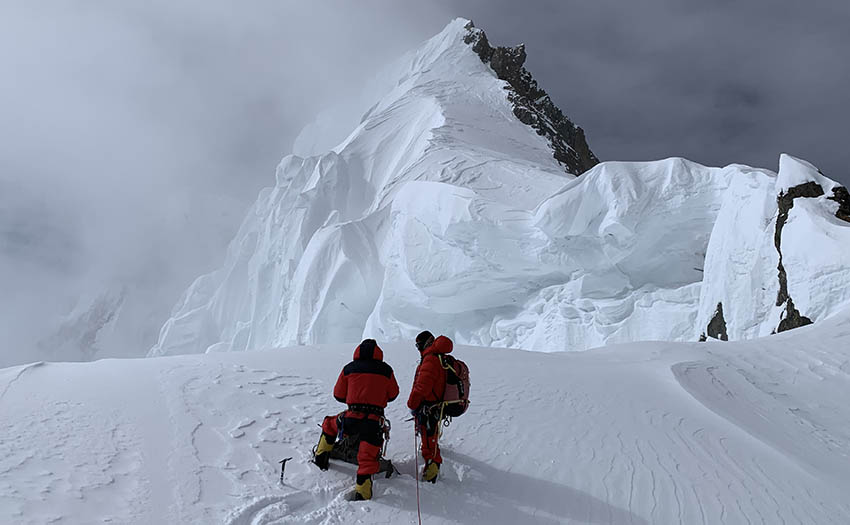 Climbing without oxygen at such high altitude is the preserve of the physically and mentally elite. Max spent six months training for the expedition, including six weeks before leaving for Pakistan sleeping in a special oxygen tent that mimics sleeping at high altitude. He also trained on a rowing machine, using an oxygen mask trimmed to simulate high altitude.

“Most climbers use oxygen on K2 today,” he explained. “This makes it much easier. Using oxygen at 8,000m feels like being at 5,000m without oxygen.”

The night before the summit day was spent at Camp 4 at about 7,800m. “Usually, you leave camp at night to reach the summit early in the morning. But due to heavy snow and a high avalanche danger, unfortunately we had to turn around and spend another night in Camp 4. The next morning I was able to launch from about 8,000m in good conditions.”

The day was “absolutely windless”, which of course brings its own problems at such high altitude. “You have to run very fast in this thin air without a headwind to take off. In addition, it was a shallow slope and I had to run through snow!”

He added: “At this height every little effort becomes difficult. I just had one thought: no false start!”

Accelerating through the ankle deep snow Max’s wing came up and he made it into the air. “The feeling was indescribable. I actually did it! I was out of breath but happy.” 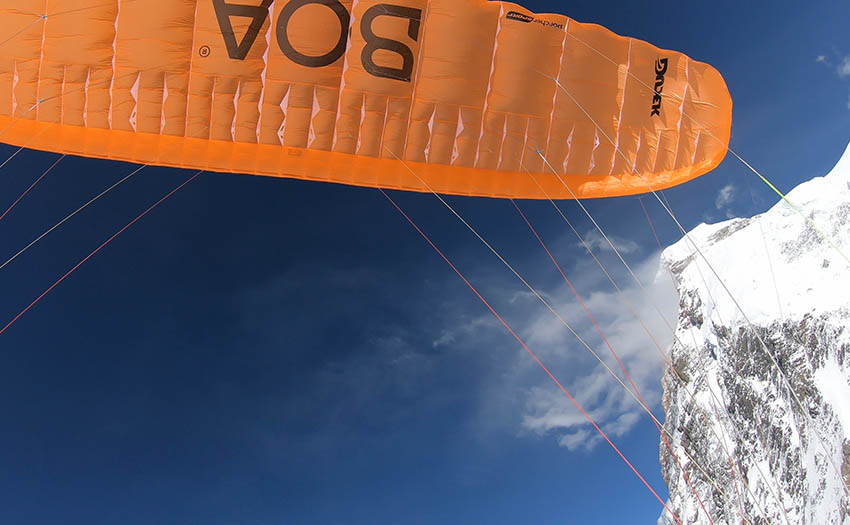 Max Berger in flight on K2

The flight down to base camp at about 5,000m took 17 minutes. It was morning, so there were no thermals or valley winds to contend with. “It was 17 minutes to experience the unique and impressive panorama. 17 minutes to descend 3,000 metres. 17 minutes for which the rest of the group needed over a day of walking and climbing.”

Base camp was 3,000m vertically below him, and just 3km distant, so glide angle was not a problem. What was a problem is that he didn’t realise he needed a permit to fly from K2, or in the region. An individual climbing permit for K2 costs around €2,000. The airspace around the mountain is a military restricted zone and flying permits need to be sorted out separately. Max had to send the Pakistan military an official apology after his flight. 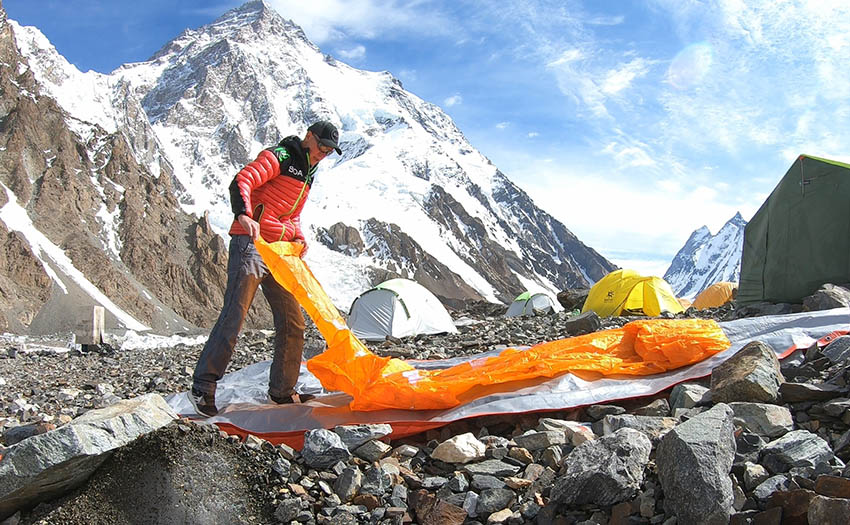 Packing up at K2 base camp. Photo: Max Berger collection

Coincidentally Max’s flight on 5 July 2019 was just shy of 40 years after the first recorded free-flight from the mountain. In 1979 Jean-Marc Boivin managed to transport his hang glider to Camp 4 and, after having successfully summited the mountain, he flew down from 7,600m on 6 September 1979. Nine years later he became the first person to paraglide from the summit of Everest (8,848m).

Does Max see flying from Everest in his future? “I don’t know yet if I will go back to the 8,000m mountains,” he said. “There are some plans for next spring, but I won’t say anything just now. Everything can always change.”