Hitting the Wall: Carl Wallbank on his 300km UK record 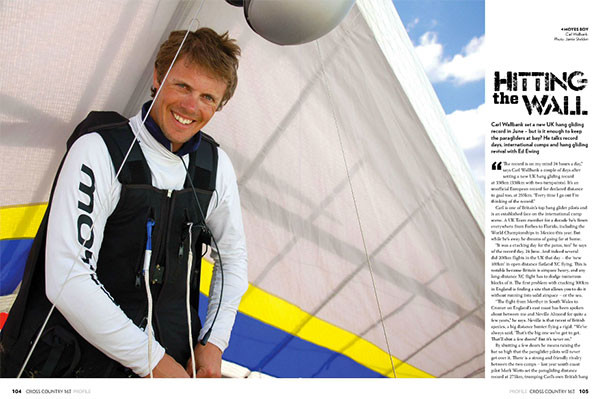 Carl Wallbank set a new UK hang gliding record in June – but is it enough to keep the paragliders at bay? He talks record days, international comps and hang gliding revival with Ed Ewing

“The record is on my mind 24 hours a day,” says Carl Wallbank a couple of days after setting a new UK hang gliding record at 330km (338km with two turnpoints). It’s an unofficial European record for declared distance to goal, too at 255km. “Every time I go out I’m thinking of the record.”

Carl is one of Britain’s top hang glider pilots and is an established face on the international comp scene. A UK Team member for a decade he’s flown everywhere from Forbes to Florida, including the World Championships in Mexico all this year. But while he’s away he dreams of going far at home.

“It was a cracking day for the paras, too” he says of the record day, 24 June. And indeed several did 200km flights in the UK that day – the ‘new 100km’ in open distance flatland XC flying. This is notable because Britain is airspace heavy, and any long-distance XC flight has to dodge numerous blocks of it. The first problem with cracking 300km in England is finding a site that allows you to do that, without running into solid airspace or the sea.

“The flight from Merthyr in south Wales to Cromer on England’s east coast has been spoken about between me and Neville Almond for quite a few years,” he says. Neville is that rarest of British species, a big distance hunter flying a rigid. “We’ve always said, ‘That’s the big one we’ve got to get. That’ll shut a few doors!’ But it’s never on.”

By shutting a few doors he means raising the bar so high that the paraglider pilots will never get over it. There is a strong and friendly rivalry between the two camps – last year south coast pilot Mark Watts set the paragliding distance record at 275km, trumping Carl’s own British hang gliding record of 269km, set in April 2012. A week after Watts flew 275km Almond flew 285km on his Atos. No one minded that very much (“It’s an Atos…”) but the HG v PG rivalry is clearly very much alive at the top of the sport.

“I took off at 10.20am,” Carl says of the record flight. “But I could have launched 45 minutes earlier.” The local soaring forecast RASP had predicted a good day and Carl had travelled to the site the night before. “I got up and it was blue, but as soon I went up the valley there was cumulus on the hill.” A paraglider was already flying, “So I knew before I took off that it was going to be an easy ride to base.”

And that’s what he got. “I’ve been over the back of Merthyr a dozen times or more and the first bit is a nervous, horrible 30km getting out of the Valleys. But this was easy. It wasn’t super strong, 3-4 up [1.5-2m/s], then onto the next bump, but it was like clockwork, every bump was the same.”

Carl couldn’t believe it. “I radioed my driver: ‘Get on Facebook! This is a good start!'”