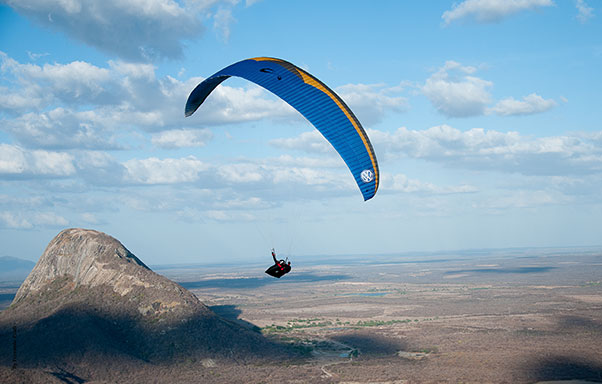 WHY GO?
If you can cope with the gusty launch, you can go a long, long way.

WHAT’S IT LIKE?
This is extreme flying. Launching is strong and you have to pick your day to fly far, but when it comes together you can go a big distance – 500km is the distance to aim for.

Traditionally the domain of the organised expedition, competition or world-record camp, Quixada can in fact be flown independently. Canadian pilot Shawn Kitchen spent December 2009 there and flew alone most of the time – he saw two other pilots the whole month. “I flew almost every day, and every time I went cross country,” he said.

Paragliding here is not for the fainthearted, but it is a place to test your advanced skills. The strong winds that mark November slacken off in December, and make it safer to launch, but also more difficult to break the 300km barrier.

The environment can be hostile. Temperatures can hit 40C, and winds regularly blow at over 50km/h in November and December.

For pilots on their own, Hotel Pedra dos Ventos is the place to go. The owner is a hang glider pilot, speaks fluent English, has maps and waypoints, and will monitor your SPOT for you during the day. He can also arrange launch handlers (essential in the strong wind) for a few dollars a day, and retrieve drivers (more expensive).

There are two launches: the comp launch, and a launch at Pedra dos Ventos 15km away. On launch your hired handler will ball the glider and help open it during the 10-20 second lulls between 50km/h gusts. This is standard practice and everyone appreciates the help. Their local knowledge is invaluable; they’ll help get you into the air much more safely and efficiently, as well as acting as a fixer on the ground.

Once up there are two main routes, depending on the wind. One is wilder and for longer distances, the other follows the road. Landing is not as easy as it looks from the air: green fields can be swamps; harvested fields have impaling corn stalks.

Retrieve can be complicated, but is part of the adventure. The interior here – one of the Brazil’s poorest states – is a friendly, helpful place. People look out for you, buses come along and everyone hitches (expect to pay a few Reals).

If you fly 200km or more it can be simpler to sleep where you land and return the next day, or buy a local flight or bus ticket to Fortaleza and return to Quixada from there. If you share a retrieve driver he will chase the pilot who goes furthest – so try to make sure that’s you!

Roads are poor and an average driving speed of 40km/h is normal. You have been warned!

WHEN TO GO
The dry season from September to December for long XCs.
June and July for shorter XCs and easier flying.

HANG GLIDER ACCESS
Yes, with a wooden ramp on launch.

MUST BE FLOWN
200km to 300km east to west following the roads (Quixada–Quixeramobim–Taua–Picos; or Quixada–Nova Russa–Pedro II). If you reach the Amazon rainforest you’ve done 500km and broken the world record.

GETING BACK
The adventure begins when you land. Locals always come to greet you and will take you to their homes and offer you a shower, a meal, and a chat while you wait for retrieve. Hire one of the several retrieve services, get your own car and driver, or go solo and figure your way back by bus and rides. Retrieves take longer than flights, and if you fly over 200km you probably won’t make it back to fly the next day. Hydrate well.

DANGERS AND ANNOYANCES
Landing away from the roads in the hot, dry and inaccessible sertao (outback); strong winds on launch and again on landing.

A small hotel close to take-off, the hotel is every pilot’s dream, with facilities and a staff adapted to the pilot’s needs whether it’s flyable or not. It’s owned by hang glider pilot Antonio Almeida, who helped pioneer flying in Quixadá. The hotel is open all year. Rooms have aircon, TV, hammock on the balcony and that all-important wi-fi. There are plans to build chalet/hostel-style rooms for those on more of a budget.

In season Pedra dos Ventos is all about servicing pilots. That means breakfast starts at 5am, and rides to take-off are thrown in for free. Antonio, who speaks Portuguese, English, French, Spanish, and is learning German, monitors guests’ live-tracking all day, and often calls the various retrieve companies to find out if ‘his’ pilots are getting retrieved; if not, he “pulls their ears”. Plans to offer a hotel retrieve service are underway (2017), as is a plan to offer shuttles to Patu, another XC site, when Quixadá is blown out.

TAKE THE FAMILY
The landscape is interesting but there is not a lot for children or non-flying partners. Canoa Quebrada, 200km east on the coast, is a famous chill-out beach spot (with soaring!).

RAINY DAYS
Canoa Quebrada and the beaches, dune buggying on the coast, Fortaleza city and Serra de Ubajara and its caves are the (quite distant) highlights.

WEATHER INFO
Nine-times Brazil champion Frank Brown’s advice is: “How do you know the best days? We never know! You must be in the air.”

GETTING THERE
From Fortaleza international airport Quixada is 160km away. There are two buses a day.