As a new pilot you glide out to the landing zone after two hours’ enjoyable thermalling above and around launch. The grassy landing zone is 1,000m below in a rather steep deep valley. This gives you plenty of height to fly over town and practise a few mellow spiral dives.

Coming out of the last spiral you notice you have drifted further downwind than expected. Suddenly you realise the landing zone is no longer in glide. To make matters worse, you are over town and you realise that your spiralling has left you with an abrupt roof-versus-street landing option.

You go for the street. Your ego is bruised but you quickly gather your kit and walk back to the landing field to pack up. There, a local pilot explains that you need to take care because the valley wind tends to increase significantly in the lowest several hundred metres this time of day.

As you progress in your flying career you travel more, fly more sites and become ever more aware of the benefits of keeping a landing zone downwind of you until you can be certain that the valley wind is not ridiculously strong.

Indeed, there are many flying sites where the wind on launch can be so light that you have to wait for a thermal cycle while the wind down in the valley can already be uncomfortable. Sometimes this can be as early as 10am. 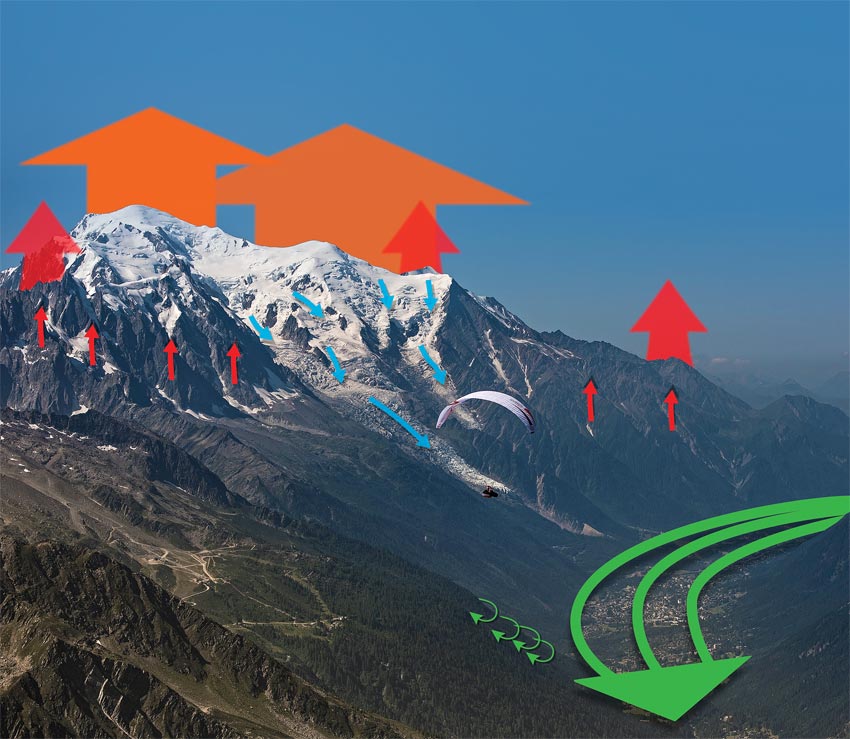 Valley winds are part of a continuum of flow, which includes upslope flow from where the sun heats the ground (red); an over-arching flow of air from plain to mountain range, which results from a heat low over the whole region (orange); and the valley flow, where air is drawn into the mountains following the valleys (green). While valley winds are broadly predictable, there are lots of factors that affect them, so their strength and depth do change from day to day as well as season to season.

Trying to forecast the onset, evolution, strength, and depth of a particular valley wind is not trivial. This is especially true if you are new to the area. Many factors have to be considered, including: valley length; width; depth; slope; sidewall steepness; number and extent of tributary valleys; proximity to large bodies of water and higher plateaus; dryness of the topography; time of year; latitude; cloud cover; and synoptic wind overhead.

To complicate things further it is not sufficient to think of the valley wind as an isolated phenomenon. It falls on a continuum between the smaller-scale slope flows, which eventually tend to lift off as thermals, and the larger scale mountain/plain circulation, which is able to overpower slope flows even on sunny sides later in the day. All these three scales – upslope, up valley and plain-to-mountain – flows are collectively termed as “thermally driven circulation”. They experience a regular reversal at night.

Despite the complexities there is a certain regularity to these flows when the synoptic situation is benign. The “high pressure, light winds aloft”, scenario is a good place to start when trying to make sense of, and attempting to forecast, the strength and depth of the valley wind where you are.

Heat lows are a regional phenomenon that can set up over higher, drier and more convoluted terrain each day when there is sufficient heating. The air over the mountains heats more than out over the adjacent plains. As it expands it begins to flow out at the higher levels, dropping surface pressure and drawing in valley winds.

In most principal valleys the wind will reach maximum speeds in the bottom several hundred metres, while often remaining light or negligible at crest level. What will be felt on the upper slopes and crests will be upslope flow, punctuated with the periodic release of a thermal.

A valley wind is not confined within the valley walls, but is often capped by an inversion that exists below crest level. This inversion, which is common in the morning, is due to the sinking warming air that is compensating for all the thermals lifting off the crests. This is why heading out over the valley is usually a safe bet when we are ready to get down.

A strong valley wind can make a valley-crossing difficult, especially if we sink into it before reaching the other side. In some cases however we can use the valley wind to ridge soar the entrance to a tributary valley and wait for a thermal to get us out of this often rather uncomfortable river of air.

An inversion over the valley can burn off by midday. However, if the valley wind is being drawn in from a large body of water the inversion can persist all day, because cool air is transported into the valleys.

Keeping these concepts in mind it begins to make sense why it might be easier to execute XC flights requiring large valley crossings in the spring rather than in the summer. With the higher mountains still mostly covered in snow the heat low is not so pronounced.

Additionally, the inversion over the valley, if present at all, might be higher due to less compensating sinking air and generally better springtime lapse rates. The valley wind is not as strong to begin with and it can travel through a deeper layer and thus flow even slower.

Given all this, it is always wise to stay upwind of a landing zone until you have fully assessed the strength of the valley wind in the lowest levels.

Meteorologist Honza Rejmanek has been a paraglider pilot since 1993. He has competed in five Red Bull X-Alps, and came third in 2009. He lives in California.

Thanks to Miles Radcliffe for asking the question behind this article, “Can you forecast the height of a valley wind? Do they change much?”