After a short session explaining the basics we let the kids get on with it. It wasn’t long before they got a feel for flying Photo: Marcus King
Latest, Reviews

We handed over this ground handling wing to some future pilots to see how they got on.

When we were at Kössen last year U-Turn told us about their new glider aimed squarely at future pilots – The Kidrock. Later we got our hands on one to hand over to the kids.

Unrolling the wing your children will certainly think they are getting to play with a proper paraglider. This is a true double-surface wing. It’s been developed from the company’s EN-A Emotion, but as Designer Ernst Strobl told us, “It has been designed specifically for children’s needs.”

The wing itself is 12m2 and has 36 cells. Just because it’s for children doesn’t mean it’s simple at the leading edge – there is still 3D shaping and shaped inlets. The front of the wing sports U-Turn’s colourful rainbow-style leading-edge colour scheme, just like the big-boy acro wings. At the back the company have even included mini-ribs.

The lines are all sheathed except the very top cascade, making them hard-wearing and easy to handle. The risers have A, B and Cs, with split-As, just as you would have on a standard paraglider. You’ll even find a speed system; we’re not sure why, although at least new pilots will be used to it being on the risers.

The brakes are fastened with magnets and run through ceramic rings rather than pulleys. Clip-in points are colour-coded. These are proper risers as you would find on a full size wing although Ernst told us they have been specially tailored to fit a child’s range of movement, “so they won’t feel like they are over-stretching.”

Elsewhere in the design Ernst told us: “With children’s needs in mind we especially adapted the trim of the wing to the lower loading. This means less effort is needed when starting or braking the wing. We also optimised the materials to find a balance between durability and easy filling behaviour.” The wing weighs 2.4kg so is not too heavy to carry back up the slope. 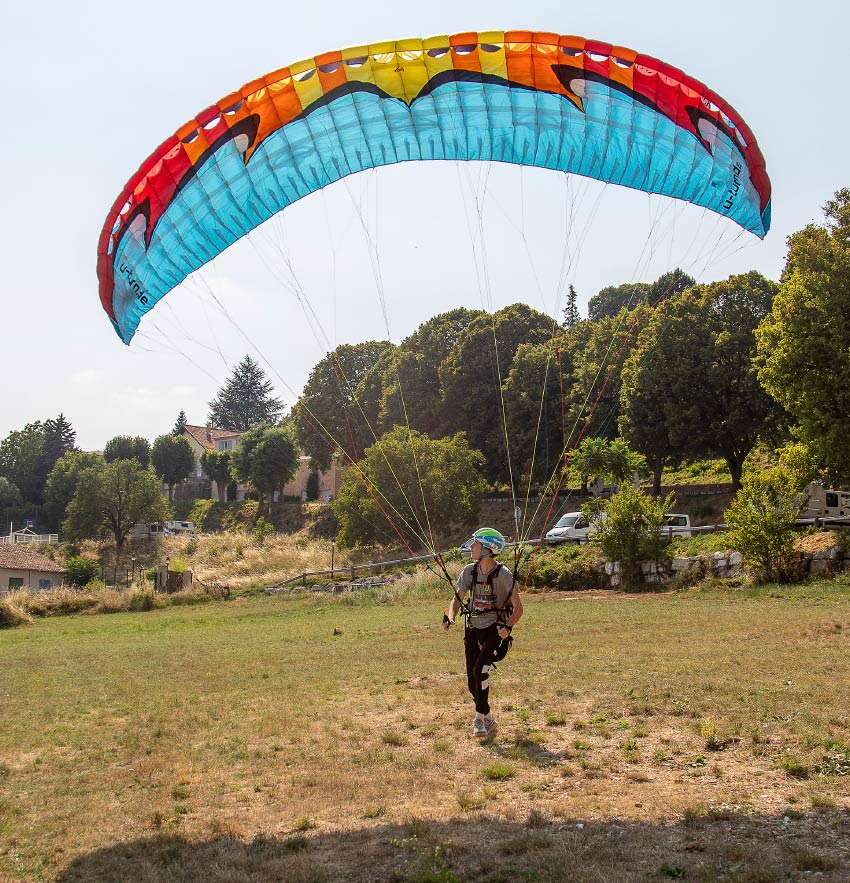 “By trimming the Kidrock specifically for the low loads we have made a wing that is safe and easy to learn on.” Photo: Marcus King

I asked Ernst why he felt the Kidrock was a better option for teaching rather than using an extra small wing or even a speed wing. “An XS or even an XXS wing is already designed for loads of 50kg and can go up to 90kg,” he explained. “How can we expect a child with only 35kg to use one of these wings? They’re too big, too slow, have bad handling and can go negative with that load.

“By trimming the Kidrock specifically for the low loads we have made a wing that is safe and easy to learn on. Having three kids myself I know how hard it is to try and teach them on the wrong sized kit.”

We gave the wing to our boys and their friends and headed down to our local field. In normal winds the wing is so much easier for them  to handle than even an XS wing. Its size means it doesn’t drag them around dangerously.

After a short session explaining the basics we were happy to let them get on with it, exploring the wing and its behaviour. It was obvious the wing comes up nice and easily without any tendency to sit back. It’s not a heavy wing to pull up, which is great for smaller arms.

It’s also not too aggressive, so they can learn how to control it without getting put off by missing their reactions. Previously we had tried using a speed wing to teach the boys how to groundhandle, but it charged overhead, and if the child didn’t catch it with the brakes they invariably ended up in a tangle of wing and lines, something that soon got boring.

With the Kidrock, although it comes up easily, we found it required very little control, so they got to spend more time playing with the wing in the air. It didn’t take long before the group we gave the wing to were running around the field getting a feel for flying, and the smiles said it all. “It’s great fun,” said our eldest between gulps of breath. “Did you see me jumping off that wall with it Dad?”

In stronger winds it also makes a good ground trainer for the adults, so you can work on improving your groundhandling skills. In short, it’s a great toy to have in the chest for the flying family. Put it in the car for holidays and you’ll have something to keep the kids occupied and keep the adults entertained when the wind gets too strong for flying.