Marcus King flies the new high-EN B from Supair

Supair are traditionally best known for harnesses but have gradually been increasing their range of wings since entering the wing market in 2014. So far they have taken a very measured approach, taking their time to get products to the market in each segment.

The Step fits into their range between the mid-B Leaf and the EN-C Taska: both wings I really enjoyed flying. As the name suggests it is marketed as a stepping point to higher performance. I flew one of the first ML sizes off the production line

Unrolling the wing it is obvious this is very much an up-to-date design. Up front is a sharknose that uses two nylon rods to create the shaping; this helps airflow across the range of angle of attacks. You’ll also find twin-seam 3D shaping to reduce the billow.

At the rear are mini-ribs that are constructed in a way that designer Pierre-Yves Alloix has been using on his wings for a while. They have internal seams that keep everything smooth, so they not only improve performance but are less likely to catch stitching on take-off.

The lineset is completely unsheathed. Even the brake lines only have sheathing on the lower part that runs through the ceramic rings. The lines are all Edelrid 8000U Aramid, are not colour coded at all, and are that slightly annoying light brown colour which is hard to see in dry grass.

The risers are elegant and slim affairs with no unnecessary complications. The As and Bs are colour coded, and the hardware is all good quality and includes Harken pulleys. On the rear riser there is a control loop, but there is no attachment between the rear riser and the Bs as you see on some wings, so all the control is applied to the rear of the wing.

The brake lines run through ceramic rings and the handles themselves are well padded, although a bit on the stiff side.

The wing comes as standard with the Supair backpack and their Rolling Bag (concertina bag), which is well made, light and includes a stowage pocket for the risers if you disconnect your wing. 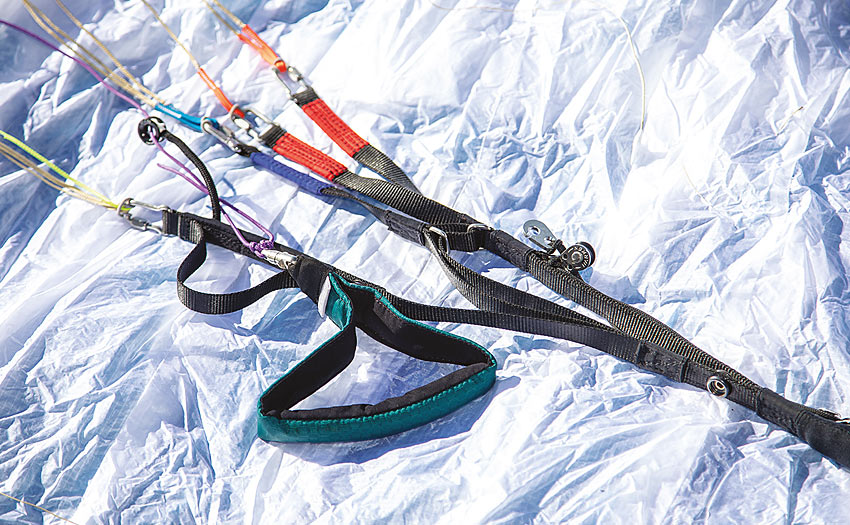 The risers are elegant and simple. There is a C control loop on the rear riser but no connection between the rear and B risers. The lines are all unsheathed. Photos: Charlie King

Launching the wing is easy, as with all wings these days. In lighter winds you need to keep pressure on the risers most of the way up and it requires the lightest of dabs when overhead. Once above you it remains there and needs little control.

My first flight was on a day with the wind coming along and down our main ridge with only the thermal flow keeping the site working. Coming from the mid-B U-Turn Crossrock I felt the Step moved around quite a lot more, especially in roll, and felt like it needed a degree more controlling. But the wing behaved well and there was no real pitching.

In turns it proved to be nicely agile and I was able to flick it round with brakes and a roll of my hips in the Impress harness. The climbing ability of the wing was also obvious from the off and I was able to climb easily despite the choppy conditions; conditions my fellow pilots were all commenting on in the landing field.

The next flight gave better conditions but a slow start. Off early I found the wing has an efficient turn in the first part of the brake travel, allowing you to keep it relatively flat. This enabled me to make the most of the lighter conditions early in the day low down. Once higher I could pull through into the deeper part of the brakes where the wing sped up in the turn: you can really turn tightly in the cores. The brake pressure is light to moderate and gives a nice feel of what is happening to the wing. The wing feels pretty pitch neutral when entering thermals and takes very little control.

On another day when conditions were particularly stable I really noticed the efficiency of the Step in a climb. Using the first part of the brakes I was able to keep the wing in a quick but still flat turn, keeping in the drifting light lift. It meant I was able to keep my averager on the positive side while others sank out, something that was commented on when we had all landed. It’s a characteristic that will be especially useful in the flatlands. 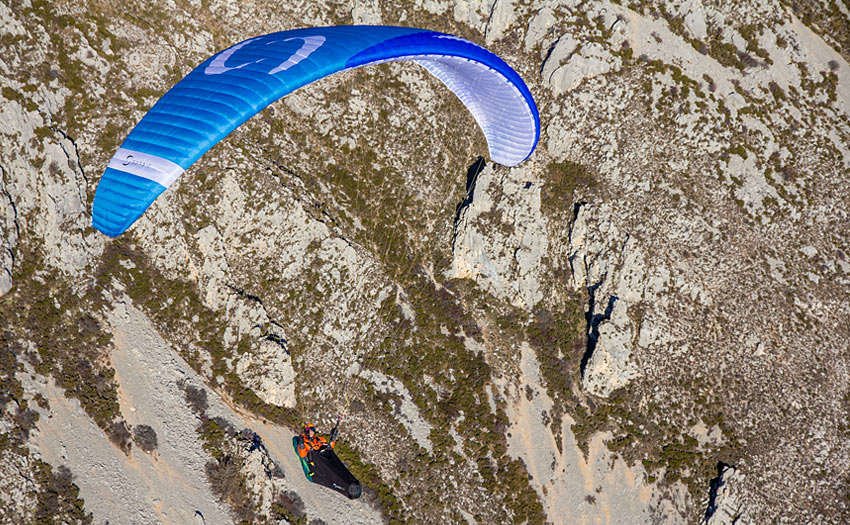 Step on it – The Step sits between Supair’s mid-B Leaf and the EN -C Taska. An XC glider it is aimed at pilots who want good performance with a high degree of passive safety
Photos: Charlie King

During my initial flights I flew with my usual harness, an Advance Impress 3. With this I noticed there was quite a lot of roll movement in turbulence. This made the workload higher than say, on the Rush 5. It wasn’t however too high, and I loved the quick reactions of the wing to my inputs.

I then switched to Supair’s Delight 3 pod harness, and found these movements very much reduced: the wing felt more stable and easier to fly. There’s no doubt that Supair will have designed the wing using their own harnesses, so this is for sure the optimum combination. It’s fair to say that with the Supair Delight 3 the wing is more assured and relaxing to fly.

Going on glide with other wings in the same class it was obvious this wing is competitive against its peers. The bar is relatively light and easy to use. The leading edge stays taut and felt reassuringly solid across the speed range. It doesn’t get knocked about on glide and there was never any real pitching. The rear-riser controls are effective for controlling pitch and steering the wing when on bar.

Big ears are easy to pull with the split-As. Once in they are stable and can be used with bar to escape strong lift. When released they roll out easily on their own.

I tried a few asymmetric collapses. There is quite a bit of pressure on the As but a quick pull on the entire A allows a good 50% or 70% collapse. Holding the collapse I only needed to shift my weight to the open side to maintain course. If pulled and released the wing recovered very quickly with no excessive turn.

Wingovers and spirals are easy to control with a nice feel to the wing.

The high B or ‘B-Sports’ as Supair call it is a pretty crowded part of the market but Supair’s Step is definitely a wing that should be considered in that class. It offers great climbing ability combined with good handling and glide performance, which make for an efficient cross-country machine.

The Taska genes are easy to recognise in the Step and for me that’s no bad thing. The Step brings a higher level of passive safety while retaining almost all the performance. A great all-round XC wing that will take you on some adventures.

Marcus King – Marcus reguarly reviews EN-B and EN-C wings. Cross Country’s designer, he has  been flying paragliders for 25 years. He lives in the south of France near the sites of Gréolières and Gourdon. He flew the Supair Step ML with Advance Impress 3 and Supair Delight harnesses at around 103kg. 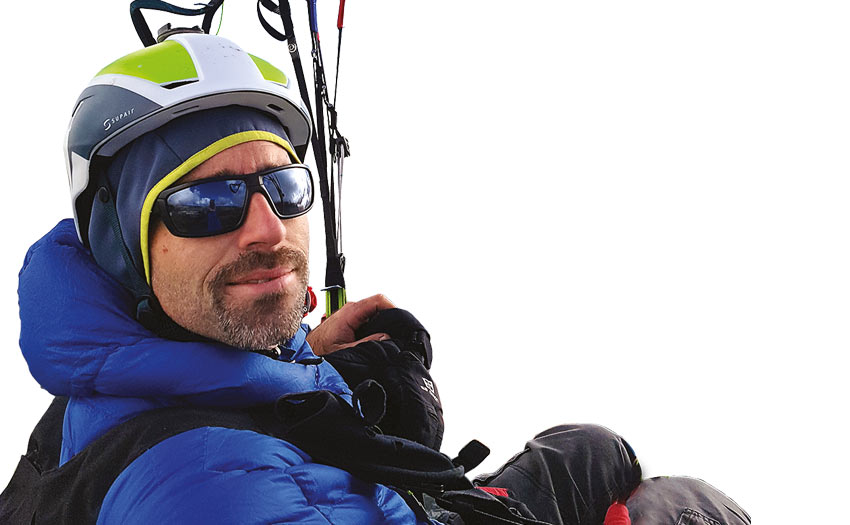 What were your design goals?

To create the best performing glider that can fit the EN-B category. The Taska, our EN-C wing, was very close to the B category already, so it was a nice base to start from, with some helpful input from designing the Wild (EN D). The Wild is based on a Taska but with a higher aspect ratio and optimised internal structure and line configuration. The Step inherited these updated features.

It feels very much like the Taska. What are the differences?

The main challenge with the Step was to reduce the aspect ratio to the best compromise between having behaviour to meet EN-B requirements and performance and general feeling.

How does this relate to performance and safety?

In theory higher aspect ratio provides better performance, but adding more lines provides more drag and so you get less performance. If you need to add more lines to support a higher aspect ratio the result can be very similar to a lower aspect ratio glider with fewer lines. This is why the gap in performance between a high-B and a C can be very small!  This is especially true at trim speed, and a bit less on the bar as you noticed. This is because we have to make a more aggressive trimming on EN-B tips than on C gliders to pass certification. So, at full-speed drag is higher: and this leads to the gap in performance between the two wings. On safety, I believe that aspect ratio is really important for safety. The higher the aspect ratio of a glider, the easier it will cravat and the more demanding it will be to control the span in the air. So for sure, the Step is easier to control and more compact than the Taska.

Yes, you’re right. We spent lot of time flying and testing the Step with the Delight 3 pod. We really tried to make this combination work well. As the Delight 3 has great stability we trimmed the Step to be quite playful in roll, to make it fun flying together with the Delight. This is why you might need one or two flights to feel comfortable if you fly the Step with a different pod, but of course it flies just as well.

Where is the Step manufactured?

We are very proud with the Step because it’s the first Supair glider to be 100% European made! All the fabric is from Porcher and our manufacturing is in Czech Republic at the Gradient factory. It has been a lot of work for the design team and also for the factory manager to make this wing because we came with new technologies and a very complex design. So now we have a system that is running well for the production of the Step and we are very exited to launch new models soon.

Do you have any specific advice for pilots moving up to the Step from the Leaf?

The Step is clearly designed for performance. As mentioned earlier, the gap between an EN-C and a high EN-B is so little that you should definitely consider the Step as a good choice after the Leaf, so there is no need to jump to the C category. The Step lineset is 100% unsheathed, so you have to be more careful when preparing the wing, as it can tangle more easily. You should also be careful on the speedbar if you’re not familiar with this tool. Even if the Step is a B, it flies much faster than a Leaf and needs more control using the C steering.

Any clever materials or design/production techniques you want to mention?

Like the other wings in our range that use mini-ribs, the Step gets Smart Mini-Ribs on the trailing edge to keep all the sewing inside. The internal structure is similar to the Wild with few diagonals and a lot of work on line geometry.

Can we expect to see a lightweight version of the Step soon?

Yes, we are working on it but we have no release date.

Supair say: “A glider for ambitious pilots who do not want to be limited by their wing’s performance”