Austrian company Skyman started out making lightweight kit for cross country pilots who, inspired by the Red Bull X-Alps and other races, wanted to go on their own adventures. Their initial designs were double-surface wings made from lightweight cloth. But more recently they have been producing single-skin wings, including the Sir Edmund tandem we reviewed last year.

With the Sir Edmund Race the company have pushed the limits of single-skin further: notably this glider has an aspect ratio of 6.0 and weighs less than 2kg. 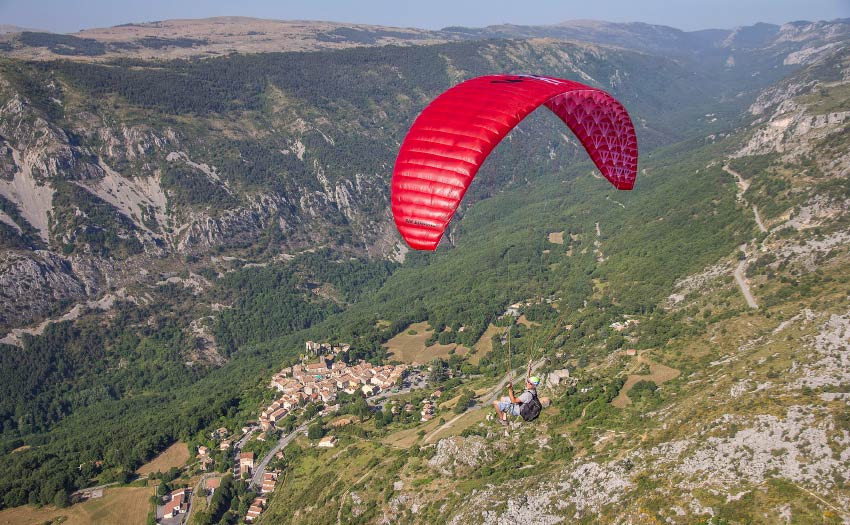 The glider is perfect for hike-and-fly of course, but staying up and thermalling is also an option Photo: Charlie King

Unusually on my own for a pre-work hike-and-fly I was out the door early and found myself at our normal take-off height a bit early. Although there wasn’t time to go to the top I thought I could extend the walk a bit further and search out a new launch spot. With my sense of mini-adventure sparked I deviated from the normal path and headed to a small peak I had eyed up as a potential launch spot. Getting there I discovered it was rockier than I hoped, so I scrambled round the next bowl to where I could see a nice grassy slope. Arriving I found a gentle wind rising up from the cliffs below: perfect!

The most obvious thing when you unroll the wing, apart from that aspect ratio, is that the company have used cross-bracing, the first time, as far as we are aware, in a single skin. This means fewer lines have to be used to support the span of the wing so there is less drag. This is important when moving to higher aspect ratios.

Up front there are large plastic inserts in the cell seams to provide shaping. This creates what looks like a deep profile. This can make packing the wing down super small a bit more difficult and you end up with a larger but flatter package. Unusually the only closed cells are right at the wing tips; there are none across the rest of the span.

The lines are a mix of unsheathed near the wing with the main lines being sheathed. There are three risers with three main lines on each riser. The risers themselves are made of dyneema with the front riser and loop colour-coded red on the left riser and green on the right, making clipping in more obvious. Despite the dyneema risers there are proper speed system pulleys from Ronstan. 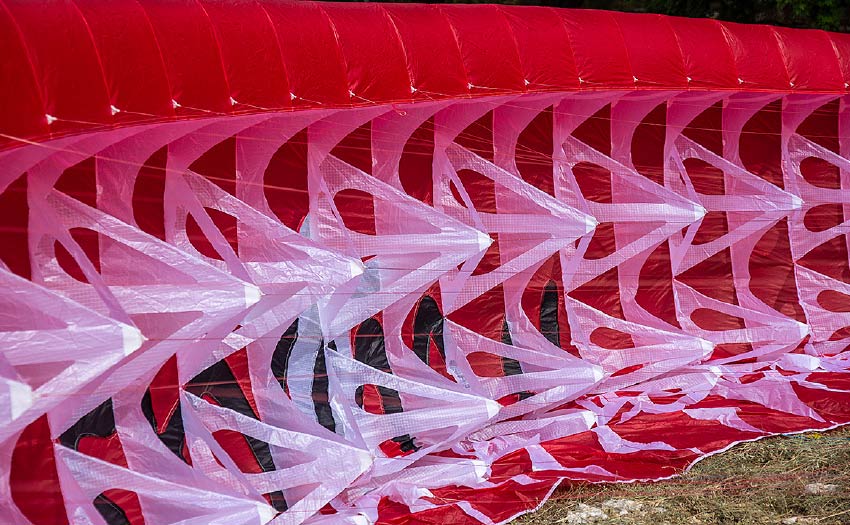 With the wing laid out and harness clipped in it was time to go. Gentle pressure on the A-risers was enough to see it smoothly rising into the air. Unlike some single-skin wings that can snap up, it rose relatively slowly and smoothly with no sticking point.

The way it rises makes it very forgiving when you can’t lay it out perfectly or if you need to gradually untangle lines from the ground. It doesn’t want to overshoot either and is very easy to control on the ground. I later found that it was just as easy in stronger conditions. Perfect for stressed high-mountain launches.

I was worried that the high aspect-ratio combined with being a single-skin would make the wing a handful in the air. On my first flight I was relieved to find this simply wasn’t the case. Judging from designer Markus Grundhammer’s Facebook page he was working on this design for a while, and I have to say it shows in the polished final product. The wing feels very solid for a single-skin wing and although yes, there are some small movements, there is no major pitching and not much spanwise movement in the wing; a surprise with that aspect ratio.

Brake pressure is a bit heavier than some other single skins, which helps give it a more solid feel. There is plenty of feel through the brakes – possibly too much for some – and you get quite a bit of noise that you need to learn to filter out quite quickly.

However, once you are used to it you can get a good feel for the lift and it is easy to know which way to turn. The brakes are responsive and the wing turns quickly without excessive rolling. It all feels very like a normal wing.

Playing with wingovers it is easy enough to get a good angle of bank. There is nothing unusual about the way the wing reacts, apart from when you decide to come out of the manoeuvre when it comes back to stable flight very quickly, like other single skinners.

The same is true when you put the wing into a spiral dive: it’s all very normal but when you release it wants to fly straight and there is no excessive pitching.

Big ears are easy to pull and effective. They flapped straight out when released with no issues. I tried to pull some collapses but there is a lot, and I mean a lot of pressure in the As. My attempts weren’t proper EN test collapses, but the wing behaved well and came straight back to straight and level flight. It is certified B but I would imagine the aspect will need some management in the symmetric manoeuvres.

Performance-wise it was obvious the Sir Edmund has a bit more glide than some of the other mountain gliders. Using the same launch most weeks you get to know where you normally cross the ridges and I was finding I could cross a bit higher or not have to fly round lumps I would normally do.

Flying alongside an original Ozone Ultralight 19 for an extended glide I had more speed but a marginally steeper flight path. I was flying at 87kg on the 20m2 Sir Edmund and the other pilot was flying at 62kg all up.

After a few morning top-to-bottoms and playing with light lift close to the cliffs as they basked in the morning sun I decided it was time to give the wing a go in stronger conditions. Flying the 20 allowed me to use more normal kit and stay within the weight range, so I clipped into my open harness with a seatboard and reserve.

Off up the hill I went to find slightly stable conditions that we seemed to “enjoy” a lot this summer. Once some of the other wings had shown the day was working, I took to the air. Entering the thermals the wing didn’t pitch excessively, but you do get a bit more movement than I would expect from a normal double-surface wing. Once in though the wing turns well and I was able to keep it pretty flat. The climbing ability is good and its small size means you can make better use of the core.

On glide the wing still feels solid. The speedbar is easy to use giving a reasonable increase in speed, although I was unable to measure it accurately as I had no probe. I didn’t feel the nose was particularly weak, although it doesn’t feel as secure as some of the new generation sharknose, set-back-As wings when they are on bar.

We’ve already seen single-skin wings in the right hands do some impressive cross-country flights and with its extra climbing and gliding performance I’m sure the Sir Edmund Race will be more than capable of doing the same. But where it is really at home is in the mountains, where its all-round behaviour and good speed make it perfect for adventurers looking to keep weight to a minimum without compromising too much on performance.

Despite the high aspect ratio and the small size it doesn’t feel particularly demanding to fly. It is obvious that a lot of work went in to making a fully polished product that narrows the gap between single-skin wings and their double-surface brethren.