Hugh Miller flies Ozone’s Mantra M7, their latest three-liner EN-D, which fills the gap between the Delta 3 and the Zeno.

Think C+, rather than D. As billed, the Mantra M7 is a compact, sporty wing with lighter, more direct handling than the M6, and a more “uniblock” feel across its span.

It turns tighter than its aspect ratio should allow – possibly even flatter and tighter than the Queen 2. Like the Delta 3, it’s very steady when entering climbs, with minimal pitch response. This means you have to fine-tune your antenna to sniff out the thermals’ movements.

This took me a few hours to get dialled in weak conditions. The benefit is a really solid, comforting ride in the strong stuff. But I still miss that nudge the Delta 2 and M6 used to give – they were just so intuitive!

Who is it for?

In terms of pilot demand, it is only a small step up from a Delta 3, Sigma 9 or Queen 2. However, a lot of reviewers have failed to mention one critical difference from C wings. Unlike Cs, the M7 has tip-to-toe plastic rods. After a big frontal, the rods make the wing “stickier”, slightly complicating recovery and increasing the chance of a cravat.

For increased descent-rate, Ozone recommend pulling the outer-Cs rather than outer-As. Brake travel to stall is slightly longer than the Zeno. Unlike some two-liners, you won’t be given any surprises when coming into a tight slope-landing.

The As are so loaded you can lift yourself out of your seat. Take care pulling full-riser collapses when doing SIV as you may induce a much larger collapse than you expect! 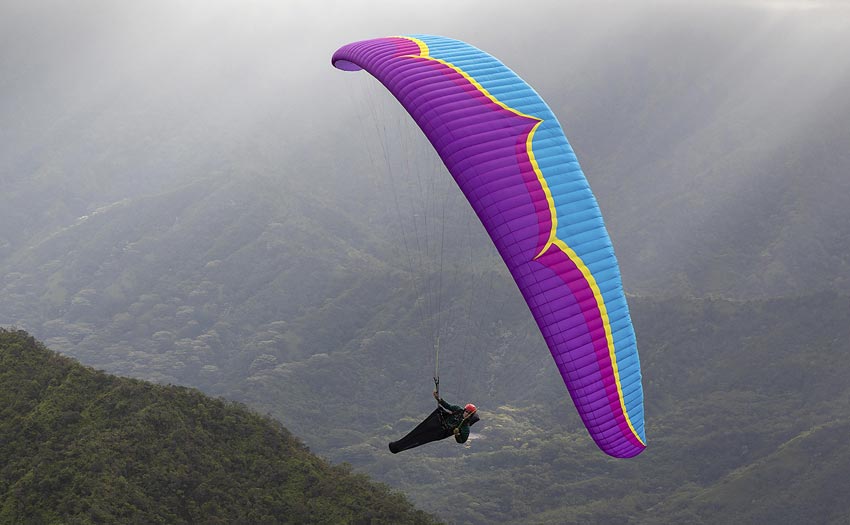 How about the performance?

In climb: it’s excellent. If you’re coming from a competition wing you’ll miss the “sniffiness”, but you’ll delight in its tight, flat radius in punchy cores. And you can compensate a little by adjusting your flying style. I got used to thermalling the M7 one-handed on the inside brake. It seems to climb much better with the outside wing flying as fast as possible, and the bonus is you’re rewarded with more feedback, as you feel the outside leading edge pitch and jab as it rides through the lift. If it gets stronger, you can rein it back in a little with the outside rear riser. Try it out: bet you outclimb people!

On glide: it’s also excellent. At full bar on the M7, you’ll be matching the two-liners who are racing more cagily on half-bar. As it gets choppier, you’ll notice the higher aspect two-liners pull up and away from you as they surf the air more efficiently.

Also, of course, the M7’s top speed is more limited – 6-8 km/h slower than the fastest two-liners. If you’re racing hard, you’ll be frustrated. The compact two-liners like the Meru, Leopard and Zeno are simply much quicker. But over a long XC in strong conditions, you’ll be much more likely to stay safe and focused on an M7. 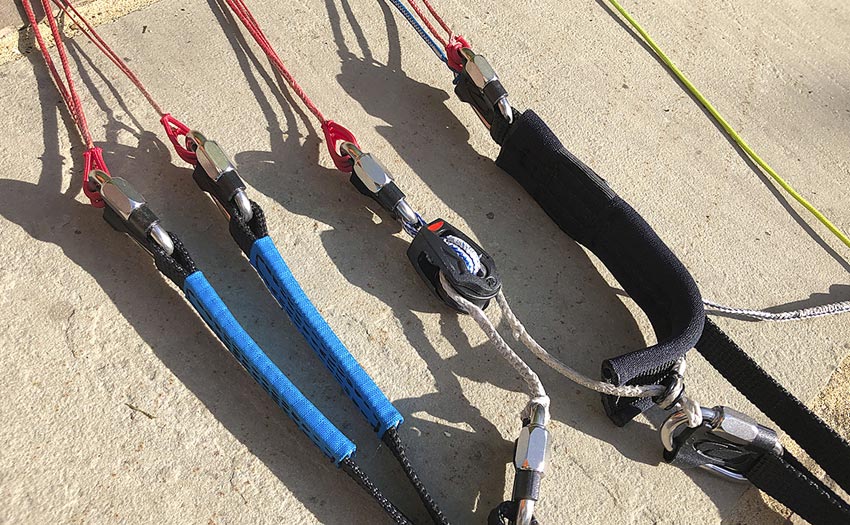 The riser set-up. By inflating using the inner-As, you will avoid any inward deformation issues

What about the rear-riser control?

Ozone’s design includes a pulley system to reduce the pull pressure on the Cs and Bs. It’s a similar bridging strap to Triple Seven’s. The system serves as an OK introduction into rear-riser control while on bar. Try holding the straps with just your index and middle fingers – it’s much more comfortable than using your whole hand. The system works well, with a nice, uniform pull on the wing’s chord, with no crease-line visible.

While flying full bar down a sucky cloudstreet the wing felt solid and taut, but I only got about 50% of the feedback I’d expect from a two-liner, reducing my sense of confidence that I’d fully feel something before it went. I was already planning how I’d retro-fit some wooden handles to the bridging straps before I’d landed.

Stepping up from a C?

It’s a great choice. In spring, US pilot Cedar Wright bought our review Queen 2, but he quickly moved to the M7. Cedar explained: “I went for the M7 rather than a two-liner because I want to respect the progression, and because I fly in some pretty rowdy conditions here in the Wild West. For sure though the M7 is a gateway drug. I’ll be moving to a Zeno 2 if and when it comes out, but for my first comps it’s been epic.”

He added: “I love the sporty, intuitive handling, and on glide it’s damn close to the Zeno. In 80 hours of flying I’ve had some top 10 finishes – OK I always get outgunned on the full bar end sections – it’s definitely a leave-you-in-the-dust feeling – but I’ve managed to keep the M7 completely open to date while I was getting big whacks on the Cs because I just couldn’t feel what was happening. I’m super happy with it.”

What about the deformed leading edge?

Some pilots have had issues with plastic rods inverting, which requires deep brake pumping on launch to clear. Others haven’t. We did experience it with the review wing. Ozone have sent out modification packs, and say the problem is now sorted in production. They think it affected “less than a dozen” early wings, and that now, “it cannot really happen” on the updated models. 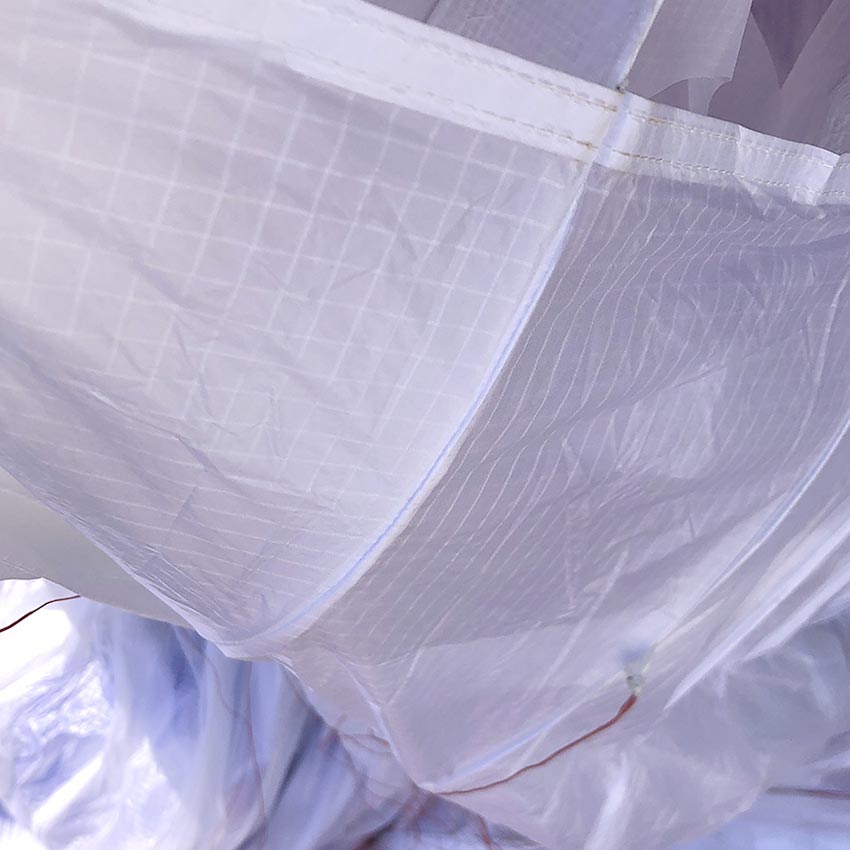 The A-lines are set as far back from the leading edge openings as they are on many two-liners – 20cm in the centre of the wing. The sharknose leading edge is solid and secure

“I do wish they’d managed to squeeze a little more top speed into the glider, but the fact I’m beating Enzos into goal by being willing to push more bar in turbulence is pretty frigging cool,” says Cedar. “But my main complaint is the riser set-up – lines can easily catch on the pulleys, making them a little more clumsy to organise before launch.” I’d argue that wooden handles require even more care, though.

This would be my go-to wing if I lived in the mountains. The M7 bears similar hallmarks to the King: it creates a fork in the road for pilots wanting to progress from Cs. Despite Cedar’s experience, which I respect, I’m still convinced that if you want to race, and race hard, you need to buy a two-liner and go and SIV it until you’re totally comfortable with it, because two-liners are simply the best machines to compete on. Anything else is a compromise – but I accept the M7 is a very, very good one.

Competitions aside, if you’re an XC head looking for the best wing to keep you smiling from sunrise to sunset on an epic 10-hour Brazilian chase for your personal best or a huge Alpine triangle, the M7 is a great choice. With some adjustment to your flying style, it’ll please the retiring competition pilot and put a huge grin on C pilots’ faces too.