Is it a motor wing or a free-flight glider? In this case it's both. The Kona 2 is aimed at paramotor pilots who also want a wing for paragliding. Photo: Matias Nombarasco / Ozone
Reviews

If you want a wing for both free-flight and powered flying, then this could be the one, says Lawrie Noctor

It has been a while since I flew a lower-end Ozone paramotor wing. When I looked back through my logbook I last flew one in 2014, and before that it was in 2012/2013 when I was an instructor. It made me super keen to see how the Kona 2 handled and performed compared to my memories of some of the earlier wings I flew, and to see how the technology from the higher-end paragliding and paramotoring wings has trickled down into this one. Ozone say this glider can be used for both paramotoring and paragliding so I flew it both under power and free-flying.

For testing I used the Kona 2 (24m²) with the Parajet Maverick/Moster engine. That gave me an all-up weight of 112kg with about six litres of fuel, giving me a wing loading of 4.66kg/m2.

The Kona 2 uses an uncomplicated three-line set-up which looks somewhat similar to a standard paraglider riser except it has the addition of trimmers. All the lower lines are sheathed Liros PPSL, while the mid- and upper-lines are unsheathed Ederlrid 8000U. As such they are similar to the original Kona. 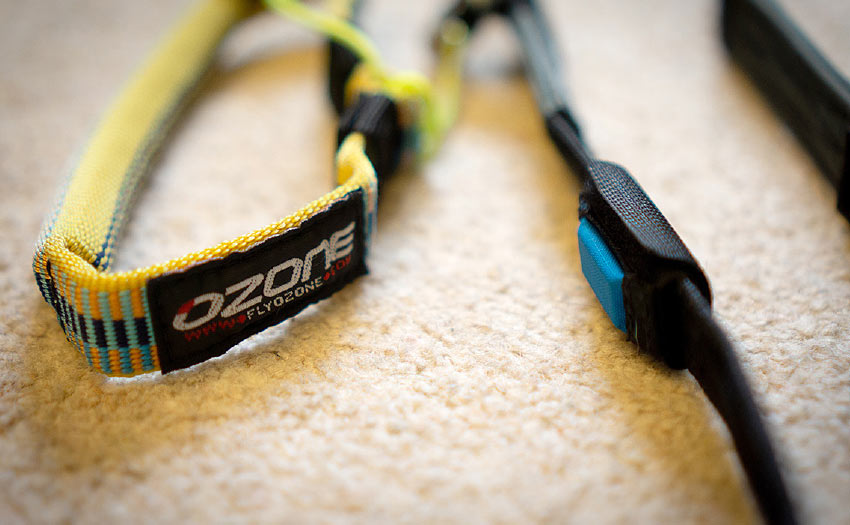 Like most of the modern Ozone Power range, the Kona 2 uses a strong-but-simple magnetic brake-holder which is really effective. I’d love to see this system across the glider ranges actually! The trimmer is easy to use and features a small plastic sheath over the line. This is a small detail but nice and makes life easier. Total trim range is 9.5cm.

Although the review model I had didn’t have the tip steering, the final production glider does come with this. This is a nice touch and will help lower airtime pilots get used to using this system.

The speed bar system uses Ronstan pulleys and has a range of 6cm. I will come onto speeds shortly.

In terms of the wing, the specs on paper look similar to the original Kona. However, there are a few key differences which improve on the original. The aspect ratio and cell count has remained the same and, like Ozone, I agree that maintaining this is important on this level of glider in order to keep the safety and easy handling. 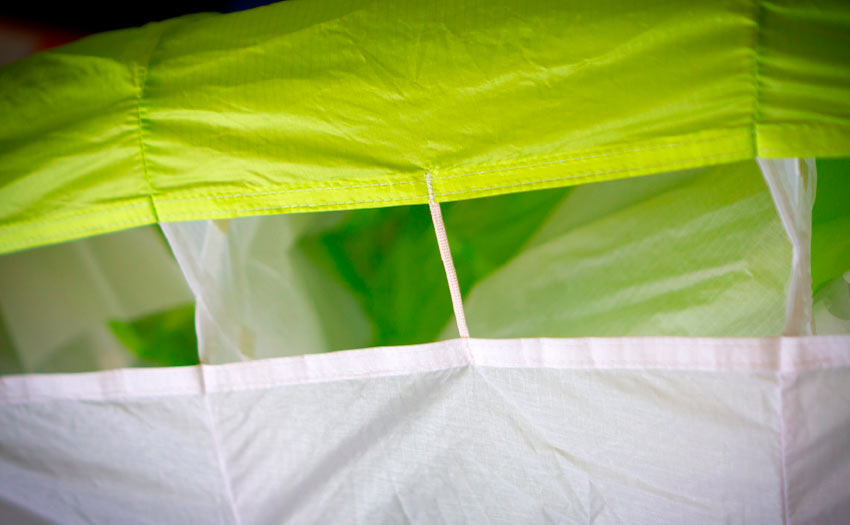 The glider has a modest but clean sharknose with the inclusion of ‘G-Strings’ on the centre two-thirds of the span. Ozone say this helps to maintain a cleaner leading edge during accelerated flight by reducing vibration. Photo: Lawrie Noctor

The glider has a modest but clean sharknose with the inclusion of the relatively new ‘G-Strings’ on the centre two-thirds of the span. Ozone say this helps to maintain a cleaner leading edge during accelerated flight by reducing vibration.

On closer inspection in flight, compared to other wings of the same class the Kona 2 had a significantly cleaner leading edge in terms of wrinkles. Moving to the trailing edge we see mini-ribs, which help keep the glider’s profile even cleaner allowing it to slip through the air.

Unlike the Original Kona, the Kona 2 uses Porcher 9018 E65 cloth (instead of Dominico DOKO 30D MF) on the lower surface and the hardened version of this for the internal ribs. I’m guessing this is where Ozone have partly been able to save a significant 400g compared with the original. This is not to be sniffed at as it is an 8% saving.

Launch behaviour is arguably one of the most important handling factors because if the glider doesn’t launch easily then you’re going nowhere, especially for low airtime pilots. I’m glad to say that the Kona 2 does not disappoint. In nil-wind it rises progressively overhead with the usual A’s resting-in-hand technique. Launching in stronger wind it does not overshoot, so I think this side of the glider perfectly suits the target pilot.

As the wing does produce a lot of lift early in terms of airspeed, if you are hill flying in stronger wind then a few steps towards the glider is needed to prevent it picking you up early. 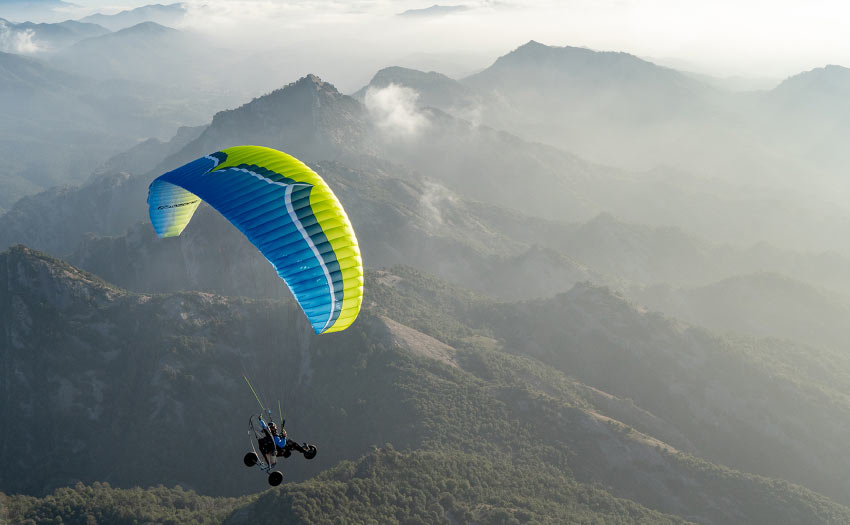 During testing it was midday, high pressure, inverted type weather, so not the smoothest. Throughout this the glider felt taut and even at full-fast speed it showed no sign of deflation or nervousness. Photo: Matias Nombarasco / Ozone

As mentioned, the glider does feel efficient on take-off as it seems to lift quickly, so I think someone wanting to fly this wing with a lower-powered or lighter motor could do so easily. As I was testing it with the Maverick/Moster I climbed like a bat out of hell.

The glider has good levels of responsiveness to weightshift using the Maverick and the brakes I would say are medium in pressure.

During cruise (either with full-fast trim or full-fast trim and speed bar), I encountered no roll oscillation at all, even when at different power settings or if purposely trying to initiate it. This was really nice as it meant longer flights could be made comfortably. There’s nothing more annoying than cursing and rolling from side to side.

However, does this inherent stability mean it’s not fun to fly? Well, I enjoyed flying the wing and, although I’d personally like a little more roll instability, I think the wing perfectly suits its target pilot. Ozone say it is aimed at “a wide range of pilots from talented beginners to the most experienced”, which now having flown it I’d have to agree with. Given most people will use this for relaxed cruising or talented students the fact that it doesn’t need constant active piloting makes it easy and reassuring to fly.

For those interested in speed, I used the following testing methodology for working out calculated airspeeds. First of all, I would take off and climb to 1,000ft AMSL and fly three full 360s by locking my arm to a set point on the riser to keep the circles as uniform as possible, this way XC Track could calculate the wind speed as accurately as possible. I would then fly between two turnpoints spaced 2km apart four times (at each trim setting) and at each turnpoint complete a further three full 360s to keep wind speed updated. This way XC track could accurately determine airspeed between these two points. On analysis I could average the speed for each of the trim settings. Below is what I found to the closest km/h: 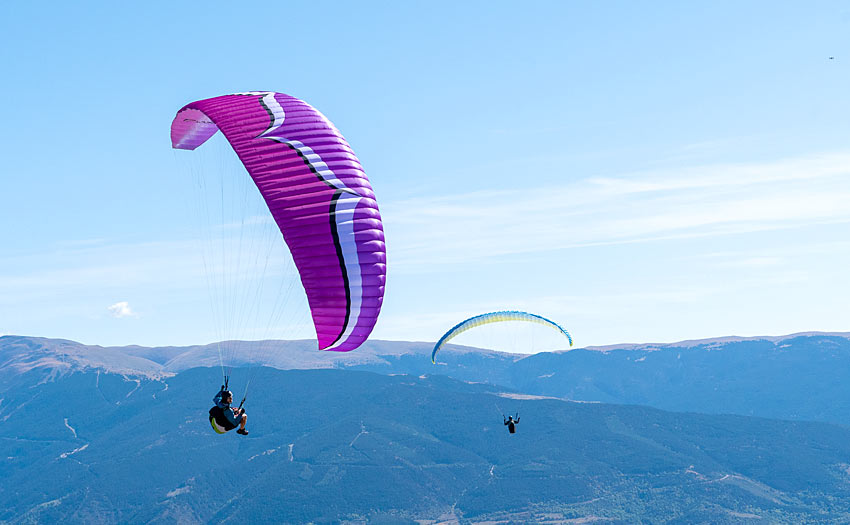 This really is a very usable crossover wing, and genuinely nice to fly as a paraglider in free flight. Photo: Matias Nombarasco / Ozone

I was lucky enough to get some thermal flying with the Kona. I flew it at the top of its EN certified range of 85Kg and in +3m/s thermals and 15km/h wind.

Straight away the glider was reassuring and comfortable to fly in the way it moved through the active air. The mix of feedback through the brake lines and risers was enough to tell you you were in active air, but not too much to put you on edge. Even when purposely not active-flying the glider did not deflate. I certainly did not feel out of class either when flying with other pure free-flight paraglider wings. This was refreshing to see as quite a lot of paramotor wings often have too high a sink rate to keep up in thermals with paraglider wings.

Manoeuvres-wise, big ears were easy to initiate and, thanks to the line colouring/riser layout, the big-ear line was easy to find and pull in. I did not need to pump them out either. Trying to get the glider to spin took some significant brake pressure and travel and even when the wing tip did start to peel back it did it slowly, giving me plenty of time to realise and correct hands up. On recovery there was minimal dive.

Because of that good behaviour I thought I’d purposely try some big pitches to see how it behaved. Exiting -10m/s spiral dives the glider immediately started recovering, in terms of both pitch and roll, and you could really feel the built-in stability doing its job. The recovery pitch forward only needed minor brake input and, on review of my video, I think I could have actually got away with no input at all. 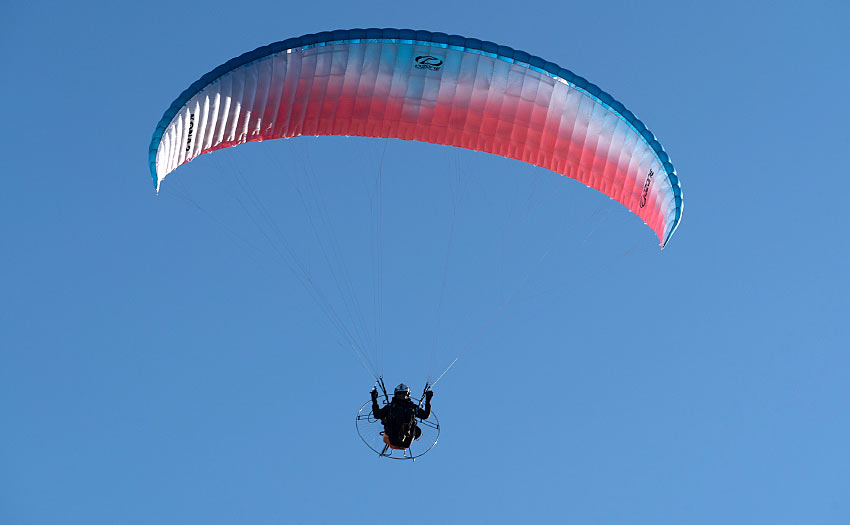 If you want to use it only for paramotoring then it is a good beginner/intermediate wing for powered flight. Photo: Matias Nombarasco / Ozone

When paragliding the flare can be held off a little longer than when flown with a motor due to the lighter loading, but it is easily manageable and has plenty of authority. When flying a little heavier with the paramotor the process is identical but with slightly heavier brake pressure.

During stronger-wind landings, due to the low sink-rate only a small flare is needed and bringing the glider down to ground is possible without having to take a wrap on the brakes.

Overall, I was really impressed with the performance and handling improvements on the Kona 2. The stability throughout the speed range means you can fly really comfortably in all conditions and the efficiency means that it becomes a genuine wing for paragliding too.

This is a perfect wing for someone getting into the sport, who maybe wants to try both paragliding and paramotoring and, like most of us, only has the budget for one wing. It would also suit more experienced pilots looking for a super easy-going and efficient wing.