Sometimes things just seem to slot into place. That’s how it felt with this review. We had been suffering with a lot of overdevelopment, but just as the forecast improved I got a call from Ozone test pilot Russell Ogden to tell me they had a brand new Delta 4 available for me to fly.

A quick potted history. The original Delta 1 was introduced in 2010; the Delta 2 arrived in 2013 and hit a sweetspot, becoming a benchmark wing in the EN-C class; the Delta 3 was launched in 2017 – good wing but didn’t quite hit the same mark; and now, in 2020, comes the Delta 4. Headline feature? A 3/2-line hybrid design with fully-functioning rear-riser control.

The Delta has always been an “accessible-C”, aimed at cross-country pilots who want first-class comfort and performance without overly demanding flying characteristics. The question is then, does the D4 deliver? 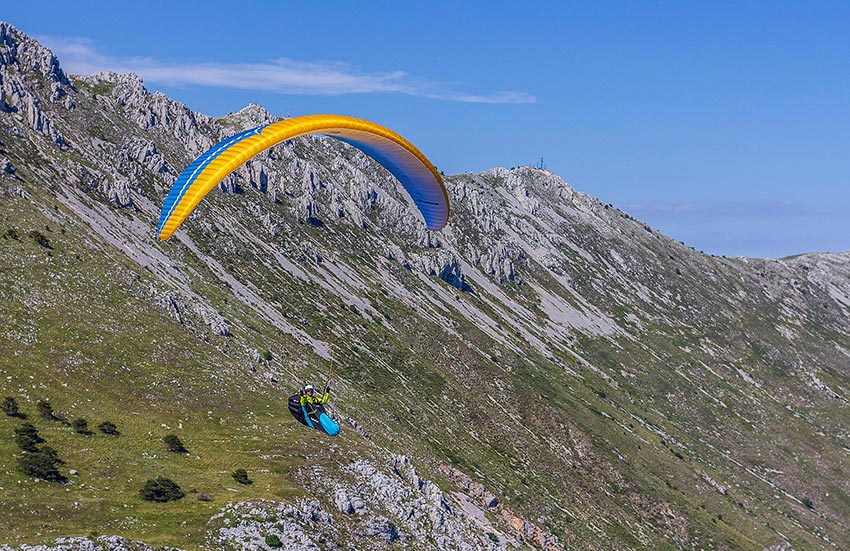 Aspect ratio is 6.05, which is lower than many other EN-C wings, but similar to many EN-B+ gliders. That alone makes it an attractive glider to EN-B+ pilots looking to move up a category

We met up in Gourdon on a slightly strange day, with the wind coming over the back just above the hill and convergence out front. Russ threw me the glider before clipping into his own prototype and heading off to fly out front.

I pulled the Delta 4 out of the stuff sack. At first glance, with its moderate aspect ratio, there is nothing massively remarkable about the wing itself. Ozone quote 6.05 for the Delta: that compares to 6.35 for the Flow Fusion, 6.44 for the Gin Bonanza 2 and 6.4 for the BGD Cure 2; all EN-C gliders. 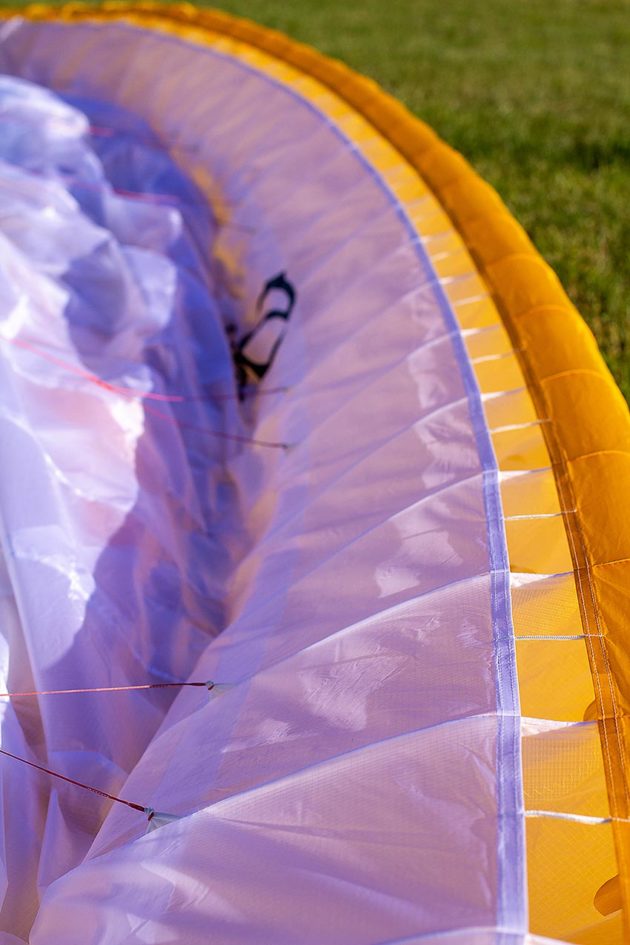 The little strips of fabric in the centre of each cell are Ozone’s G-strings and are there to reduce vibrations in the leading edge at speed. Plus well set back A-lines

Look closer though and you will see it sports all the latest technology: sharknose; mini ribs; and Ozone’s latest trick, the G-Strings on the leading edge. Ozone say their G-Strings bring most of the benefits of high cell counts without extra sewing, weight and cost. They first appeared on the Rush 5 (EN B) and are small tape tabs that run from front to back in the centre of the cells. They are there to reduce vibration at speed and help keep the shape of the aerofoil in the all-important first third of the chord. 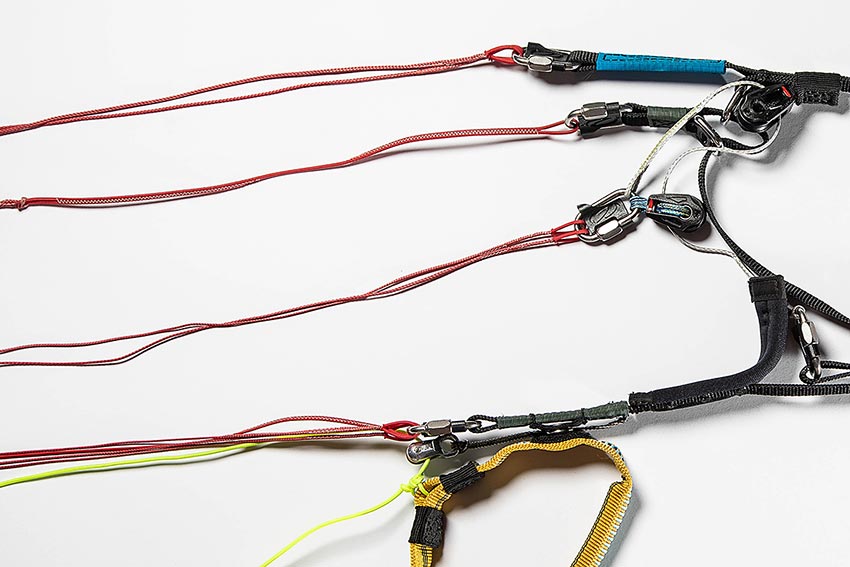 Unsheathed lines all round, with the exception of a short section of the outer-A (third line down in the photo)

The lines themselves are all unsheathed, apart from a short section at the bottom of the outer A, to make big ears more comfortable to hold. The brake fans now attach to V-tabs across the entire span.

As with most modern gliders much of the magic is inside the wing, and Russell later told me a lot of work has been done on the internal structure and profiles to make it more solid, especially on bar. The wing itself is made of a mix of Dominico 30 and 20 with Porcher ribs and weighs in at 5.26kg for the ML I flew.

As already mentioned, the most obvious innovation is in the line layout. Ozone have used a two-line layout at the tips, which makes for an obvious comparison with the new Flow Fusion (EN C, reviewed last issue). Like the Fusion, the Delta has two main lines at the tip with the rear having two tab attachments. Unlike the Fusion the Delta transitions directly from that to a three-line layout in the centre, with D-tabs. It will be interesting to see how other manufacturers start to play with this 3/2-line hybrid style. 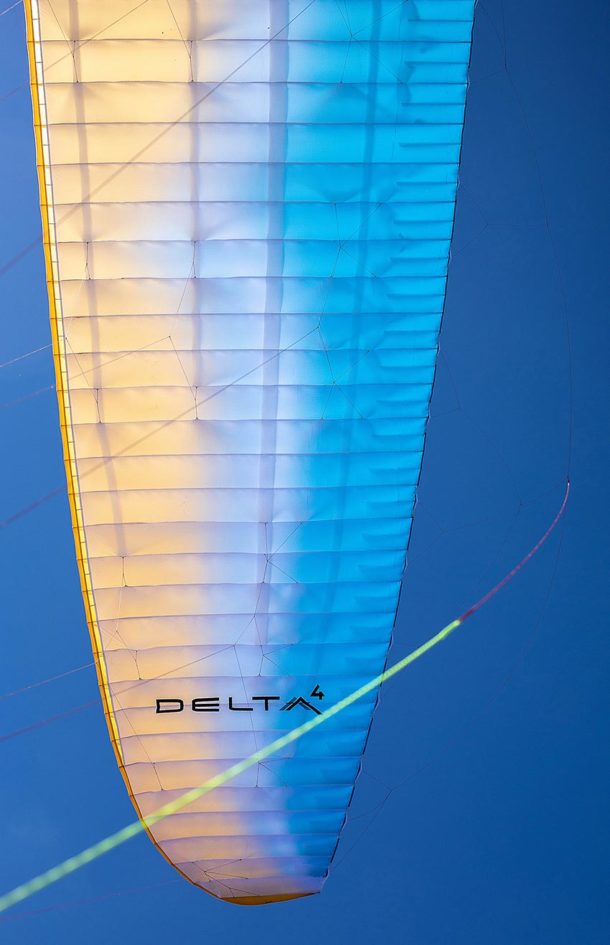 The line layout is three lines in the centre and two lines at the tips. This new 3/2 layout allows for 100% usable rear-riser control

Clipped in for the first time I built a wall and was ready to go. On launch the wing behaves really well: with its comparatively low aspect ratio it comes up easily with no snaking. It rises steadily with no dramas and not much control needed to keep it above your head.

With the obvious mixing air I was a bit apprehensive about flying a new wing but once in the air the comfort level of the Delta was immediately obvious. It’s not a wing that gets moved around much, and the ride keeps stress levels low even in moving air. But that was about as much as I learnt on my first flight as low cloud moved in and I spiralled down to top-land while I still could. Coming in to land, I realised just how confidence-inspiring the Delta 4 is and I was able to use flapping to increase my sink rate for a perfect landing back on launch.

With a good forecast, the next day we headed to our local XC launch, Col de Bleine. Wanting a good day out and mindful of a lack of hitchhiking thanks to Covid I set myself a 100km route ending back at take-off. It was a flight that gave all sorts of flying, from wind-blown punchy thermals early on to large 5m/s climbs to base and long glides on bar under growing clouds. Enough to get a good feel for the wing.

In thermals the wing takes very little management, it just sits above your head responding well to the inputs. Ozone have done a remarkable job on the brakes and the turn behaviour. The brakes have a good long travel but react quickly to input, making it nice and agile. With a small amount of input you can have it turning flat, and the next stage to bank it over when necessary seems only to take a small flick of the wrist. I take a half-wrap, and usually have my forefinger resting on the brake-line for feel, it felt like I could click it round just by bending my finger.

You may be thinking “ooh this sounds too reactive for me” but I can assure you it’s all very natural and, because the wing is nicely planted and calm, you aren’t having to correct it all the time. It’s also pretty accommodating of heavy handedness: I tried pulling more aggressively and it doesn’t overreact when you go too deep.

I found myself dialled into it very quickly and able to use my brain energy on other things, such as route decisions rather than flying the wing in thermals. It really isn’t that much more workload than the Rush 5. 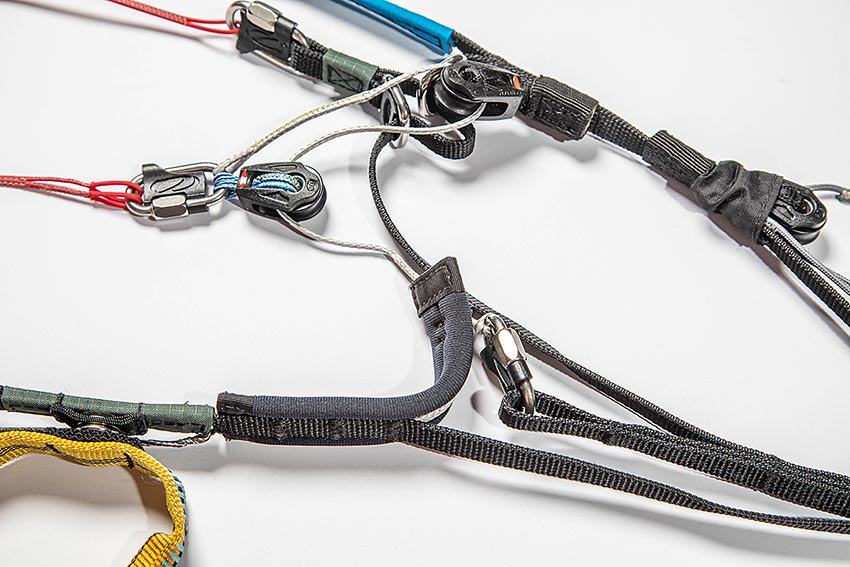 Ozone have brought their Active Control Risers from the Mantra 7 to the Delta 4. In the same way as a two-liner these act on the Bs and Cs to give control over the angle of attack, without affecting the camber of the wing. Unlike the Fusion, which has classic two-liner style wooden handles, the Delta’s system uses a padded section on the rear riser.

On my 100km tour I spent a lot of time on half-bar using the ACR system. The team at Ozone have done a great job of making this responsive and intuitive. Before take-off I was a bit sceptical about the lack of handles, but I found in use the padded area at the bottom of the C-riser works really well. It’s a natural place for your hands to be on glide. Weighting is perfect, with enough resistance so you don’t feel like you are having to hold your hands up, but light enough to get a really good feel for the wing.

I was able to feel what the air was doing on glides using it, but I used it more for feeling the air and slowing the wing in the lifty sections and even some thermalling. You can feel the pressure in the nose, which makes dealing with pitch easy, but it really isn’t a very pitchy wing. The extra level of information you get on glide not only helps you choose better lines, it also makes you feel more secure.

As for performance, on glide I didn’t get the chance to put it wingtip to wingtip with other wings. And of course unless both pilots have the same bodyweight, shape and harness it is hard to make comparisons. What I can say is it isn’t pushed around by the air so it feels efficient on long glides, especially into wind.

On my way home the clouds were starting to get quite black in some of the convergence zones. Most of the time I could use route choices to avoid them, but on one crossing I had to head under one to reach the sunshine on the other side. So I set off with big ears and bar applied.

The ears took a bit of practice to get folding under nicely, as pulling too much had them banging back out; this wing wants to remain inflated. The big ears system is interesting: there is a small ‘mini riser’ with just one line on it. That line is sheathed for about 20cm, and then connected to an unsheathed line. Ozone say the best way to maintain big ears is to use this dedicated sheathed line, and indeed that is what I found. Once I got used to them I was able to keep them applied without too much flapping and, used in conjunction with the bar, this was efficient at escaping cloudsuck.

During my 15 hours flying the wing in proper cross-country conditions I only had two small tip collapses – once in a snotty windblown thermal when I missed the edge, and once while photographing while trying to thermal. In both cases there was very little deviation in course and I could continue to turn away from the collapse and pump it.

Spirals are easily controlled and you can bleed the energy well on exit so it comes out smoothly. Playing with wingovers on the way down I found it is easy to get up above the wing in a controlled way. 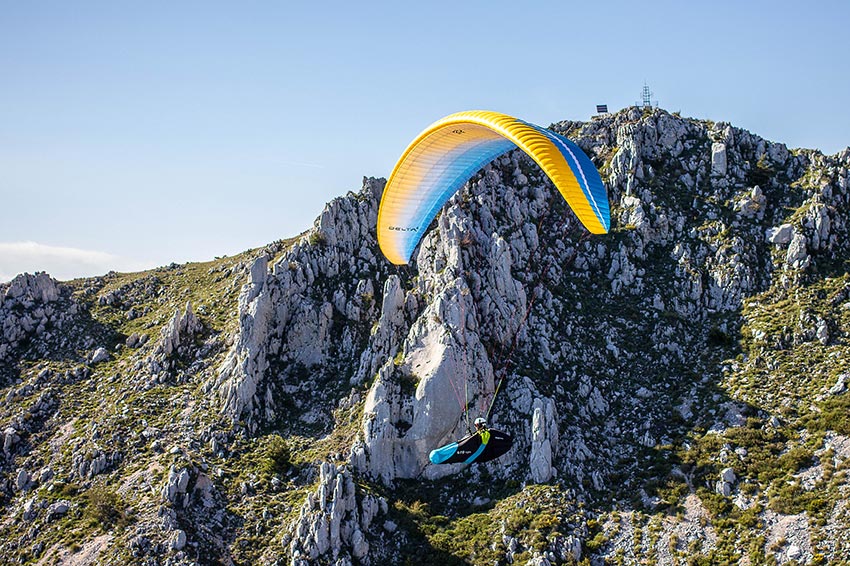 The rear-riser control and solid feel will have you reaching for the bar on every glide.

A day later I flew a small triangle at my usual site. Two legs were mainly in ridge lift with a mix of thermic activity and convergence. Again, the ACR added to the security on the bar as there were no surprises and I could feel the lift lines. I found myself wanting to be on the bar as it feels more secure. When I mentioned this to my colleague Hugh Miller he replied “welcome to the world of two-liners.” Measuring full speed I found full bar gave an extra 13-14km/h over trim speed, all fully usable.

Knowing that I had to hand the wing back soon but facing a five-star forecast for the next day I skipped the office and took the wing out for one final trip round our local mountains. I planned and flew a six-hour 155km flat triangle. Again, the wing really showed how easy it is to fly and how intuitive the rear-riser control is. Relaxing to fly for long periods, it feels secure and leaves you to get on with observing the route ahead and making decisions.

The fact that I was able to fly nearly 300km in the few days I had the wing is testament to its performance and usability. And although this usable performance may be the headline, it’s the carefully crafted handling and that rear-riser control that make it such an enjoyable wing to fly. Ozone have created a wing that is only slightly more demanding than their high-B, mixed in a zingy bit of handling and made it want to glide and glide.

Marcus King flew the Ozone Delta 4 ML with a Woody Valley GTO Light harness at about 98-100kg all up in thermic conditions in the south of France, from local cruising to cross-country flying through the southern Alps.

This review was published in Cross Country issue 212