The Oudie N screen is brighter than the latest smartphones and is easy to read, even in sunlight. Photos: Marcus King
Reviews, Technology

Marcus King flies this specialist hardware for the Navigator app.

The Oudie N runs the same Navigator app and comes with a perpetual licence to the full app, as well as a year’s subscription to SeeYou Cloud. That means extra functionality, including the ability to see real-time weather data from third-party providers and connecting to external Bluetooth devices, although the latter is less relevant as the Oudie N has its own dedicated sensors.

The actual device is a black box similar in size to the Oudie 5, which it is designed to replace. The case looks 3D printed, feels tough and is easy to grip. The front is dominated by the screen, of which more in a bit. On the bottom edge is a USB-C port for charging complete with charging light. There is also a SIM tray here so you can have a direct mobile connection – useful for tracking and sending data.

On the top edge is a camera for scanning task QR codes. The app also allows you to share a task via QR code. On the right edge are power and volume buttons.

The back is flat, making it easy to attach to your deck with the supplied Velcro patches. As befits a dedicated flying instrument there is of course a tether to keep it from flying off on its own.

With a big 16,000mAh battery inside the Oudie N is 23% heavier than the Oudie 5 Pro, a noticeable increase when you have both in the hand. You can charge your phone from it when you land. 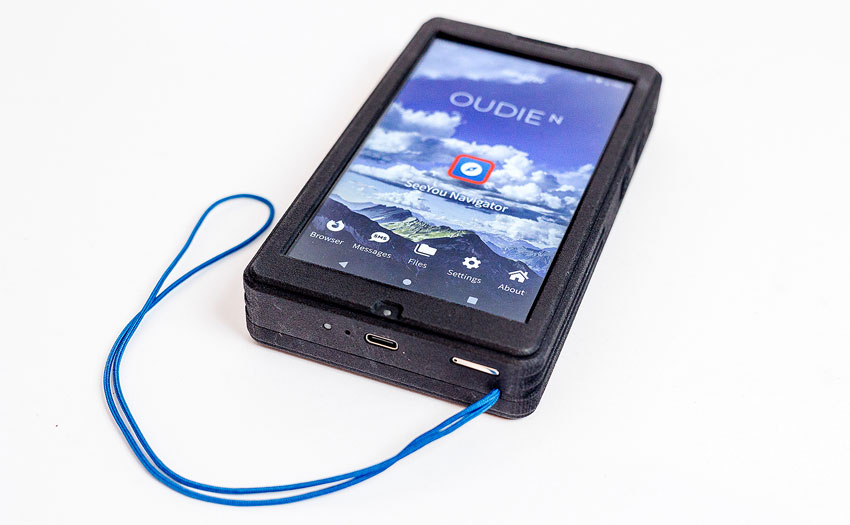 The Oudie N runs a heavily skinned version of Android 9. It charges and connects through a USB-C. Photo: Marcus King

The first thing that jumps out is the sharpness and brightness of the screen. It’s easier to read than even the latest smartphones, especially in sunlight; Naviter’s spec says it is 1,000 nits – the same as the latest Air3 tablet. With a screen size of 5.5 inches (13.75cm) it’s smaller than the Air3’s 7-inch display but slightly bigger than the Oudie 5. It also has full HD resolution.

As the system starts up you will recognise the Android interface – it runs version Android 9. However, unlike the Air3, which allows you to choose your apps, the Oudie N is very much dedicated to running the Navigator app. None of the normal Google apps are there. Naviter said they wanted to make sure the unit didn’t get bogged down with extra apps, so think of this more as a dedicated flying instrument that happens to run Android.

It can of course sometimes be useful to run multiple apps. For example, on my phone I use XC Guide for live-tracking alongside the Navigator app. But this doesn’t work on the Oudie N. I added XC Guide using the source file and, although the app runs, it doesn’t seem to have access to the GPS so it’s not of much use. In response to this, Naviter’s Andrej Kolar told me that third-party app developers could update their apps to make use of the sensors in the Oudie N, so it will be interesting to see if that happens.

The Oudie N has its own built-in vario sensors with gyro assistance for instant-vario functionality. Andrej said, “They are much faster and more accurate than those in any phone, they can also adapt to high-G situations better than any phone can.” It also has a GPS unit that works with the GPS system satellites as well as those from Galileo and GLONASS.

There is limited control over the sound and currently there is no ‘buzzer’ function for when you are in non-sinking air, although I’m sure we will see these in future updates.

Flying with the instrument alone (once I had dialled back the high frequency, which at default settings felt a bit frenetic in strong thermals), I found it was quick to react and the sound was familiar. As a standalone flight instrument you can switch it on and go, you don’t have to worry about linking it to an external unit to get a quality vario.

There was no Fanet+ module in the unit I was flying with, although I spotted the latest release is now supporting the module. 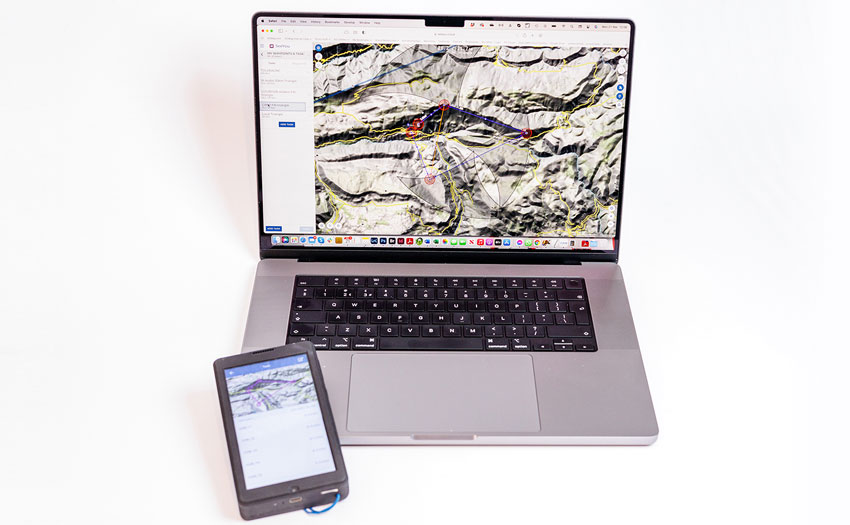 The Navigator app is deeply integrated with the SeeYou Cloud

With its wireless data connections the Oudie N works as as part of the SeeYou Cloud system. On a trip to Bassano recently we used my laptop running SeeYou Cloud to plan a series of tasks for different conditions. Once created they were immediately available on my Oudie N to fly – no copying of files or searching for wires to connect up. It all feels very Apple like and just works.

When you land it is easy to send your flights to your online contest straight from the instrument or email them. You can even check your ranking on the built-in browser. Tracklogs are not available via the USB connection, however Andrej confirmed this functionaily would be coming in the next release.

Naviter’s aim with the Navigator/Oudie N family is to get pilots onboard by using their phone and free app. Then, when they are flying XC, add extra functionality and tight integration with SeeYou Cloud by subscribing to the service.

If you want that full flight-instrument experience however, you can switch to the Oudie N. It does everything the app does plus adds a sensitive vario without worrying about backup batteries and wiring. Pilots may hesitate at the price, but if you run apps on a second phone and need a connected device for proper vario functionality you will soon have spent as much or more.

With the Oudie N you will have a switch-on-and-forget instrument that is tough, has a bright screen and all the advantages of being a connected device. I would recommend getting the Fanet+ equipped version so you have everything in one device.

Naviter say: “Oudie N brings live data and seamless integration with SeeYou to your cockpit, so you can focus on what’s important to keep you flying for longer and further.”
Weight: 430g
Size: 15 x 8.6 x 2.4cm
Battery life: 15h at ‘max everything’ to 64h screen off; the vario will still work with screen off
RRP: €990 incl tax (trade-in scheme for older Oudies)