Having seen the prototype Race II from Kortel at the Ecuador Paragliding World Cup late last year I was immediately impressed with the build quality of the harness and the amount of effort Kortel had clearly put in to make it so comfortable – but to be honest I was quite shocked at the shape and fairing size! A few people commented on the unusual ‘banana shape’ of the new Kortel: why had they gone for such a revolutionary design?

Denis Cortella is the man behind Kortel, and his co-designer and test pilot Max Jeanpierre explained their thinking to me. Even the slickest harnesses available (think skinny, pointy hang gliding harnesses) suddenly become quite inefficient when the angle is too high or low to the airflow. What angle should we even be? Everyone has a slightly different opinion.

Also, your harness angle changes slightly with different amounts of speedbar. This is why Kortel say they’ve designed their harness in this newish, unusual shape: it’s meant to be very low drag at a variety of different angles. The fairing is big – not only as long as anything else out there, but also much taller. It comes right up to the top of your head to reduce drag from the whole body. 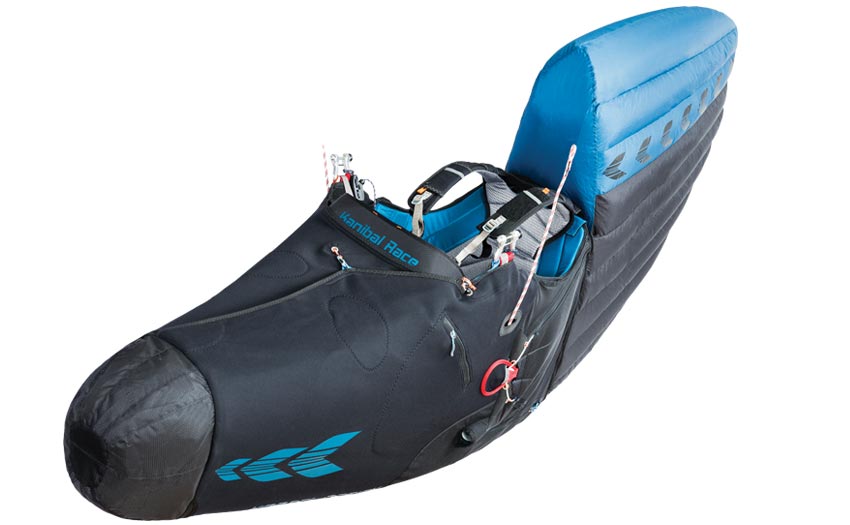 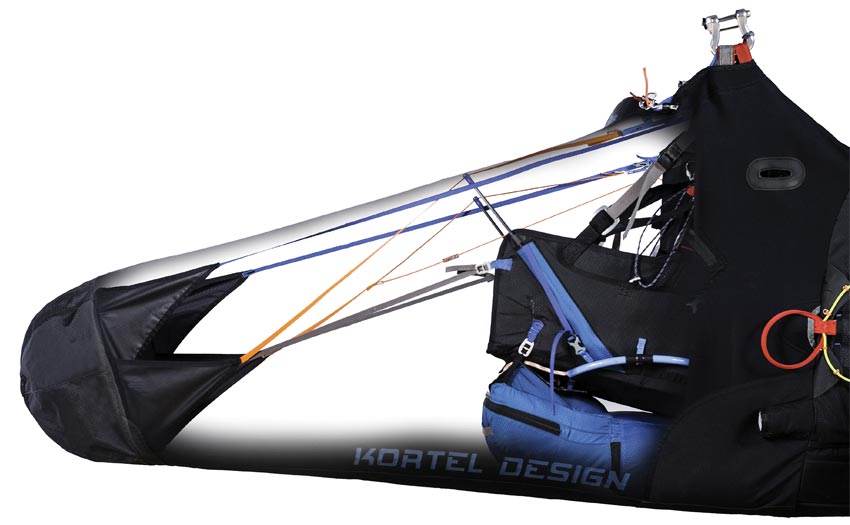 Build quality is excellent. Kortel say it takes more than 100 hours and 640 different components to make a single harness. Having seen mine up close I now see how that is possible!

One thing I wasn’t so happy with, however, was the friction of the speedbar. The speed lines run through some plastic tubes to protect the webbing, but the tubes had a curve, which created quite a bit of rope friction. I’ve now heated those up with a hair dryer to straighten them out, and now the whole system seems better. It’s not the hardest fix but seems a shame I had to do that myself; I heard someone else had the same issue.

The design includes two long plastic battens that support the back down through to the seat. Kortel recommend you remove these before travelling on a plane, but Hugh managed to kink these getting his harness in the car the first time. They restrict packing a little. One other snag – literally – is the use of zippers on lots of pockets. These can catch microlines, so take care on launch, or when balling up your wing.

Storage space is good with two good-sized main pockets, side pockets, and of course space for two reserves, Anti-G, ballast, Camelbak compartment and so on. The flight deck is huge – enough space for my seven-inch tablet, vario and phone.

The clipping-in process is easier and quicker than the Exoceat, and comparable to the XR7. 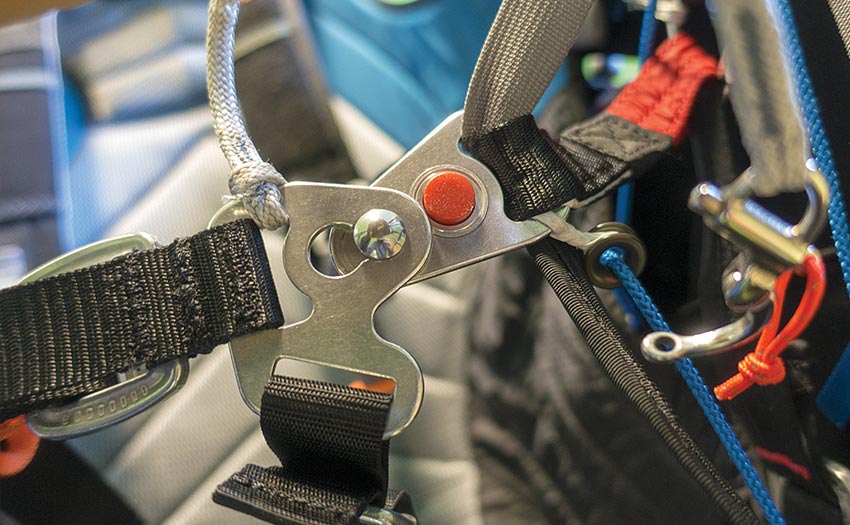 Clipping in is a fraction more involved than with the XR7. Gloves off for some parts

Right from the take-off it felt very solid in the air, comfortable and supportive, almost like I was sitting in a sailplane cockpit. Unlike some seatplate pods, there’s zero effort required to keep the legs locked in place – it feels like a really comfortable hammock pod in this respect. One downside is the fairing inflates behind your head, so it’s harder to check your glide line against other pilots behind you. It takes some getting used to.

Coming from an XR7, Hugh found the feedback to be more damped and graded – all in a good way. It’s less damped than an Exoceat, but gives you a really positive feeling of control over your wing and in turbulence it does a lot of the work for you, damping out the glider’s roll movement. Feedback is noticeably less than my last harness, the Woody Valley GTO, however on the Enzo 3, in strong conditions the GTO gave more feedback than I wanted. 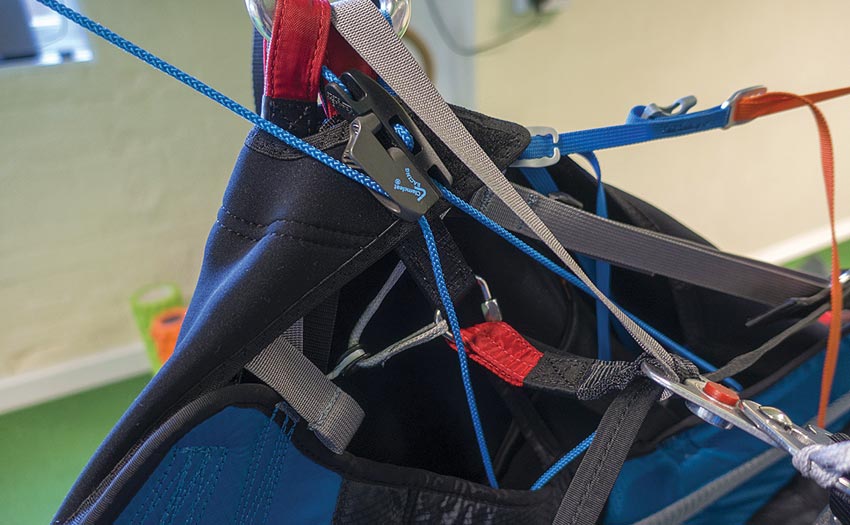 It feels beautiful on glide. The adjustable stability system will come into its own in strong alpine ridge flying. Two lengths of cord lock into cleats in a well thought-out solution. When you tighten these the harness transforms and you don’t get rolled about at all.

I found myself gliding with speedbar and my hands on my lap lots because of how solid it felt. I am also aware the less I was being rocked about the better my glide was. Gliding cross country with two Zenos and another Enzo 3 I felt I was gliding better than ever. As I mentioned earlier, the speed system isn’t as smooth as others, but Kortel give their reasons for this in the sidebar interview. 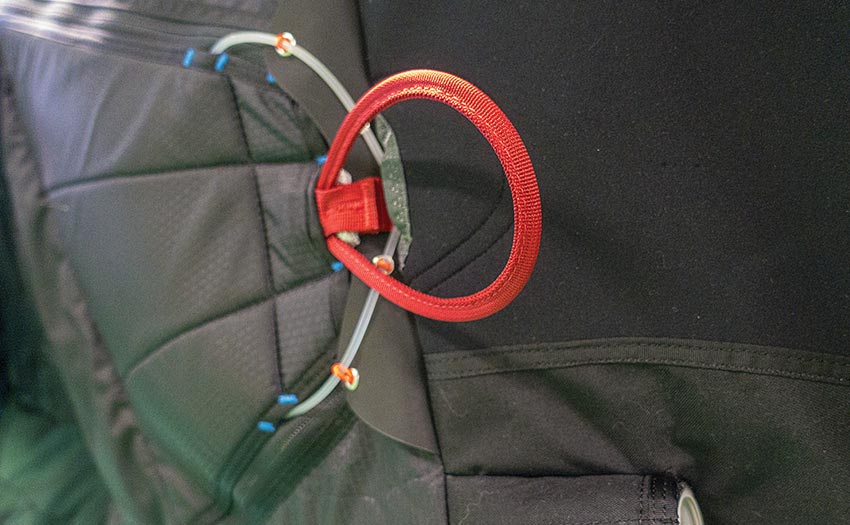 The reserve is quicker to install than on the Exoceat, with zippers running rearwards from plastic strimmer wire. There’s an air intake for the fairing on either side of the harness, and behind the pilot’s head

Kortel say they made 18 different full prototypes of this harness and 2,000 hours of work went into designing it. The result? Easily the most comfortable harness I have ever flown in. I’m 193cm tall and am flying the Large. I usually have problems with unsupported shoulders or not enough support in my lower back – not with this harness. It feels like it was made just for me! 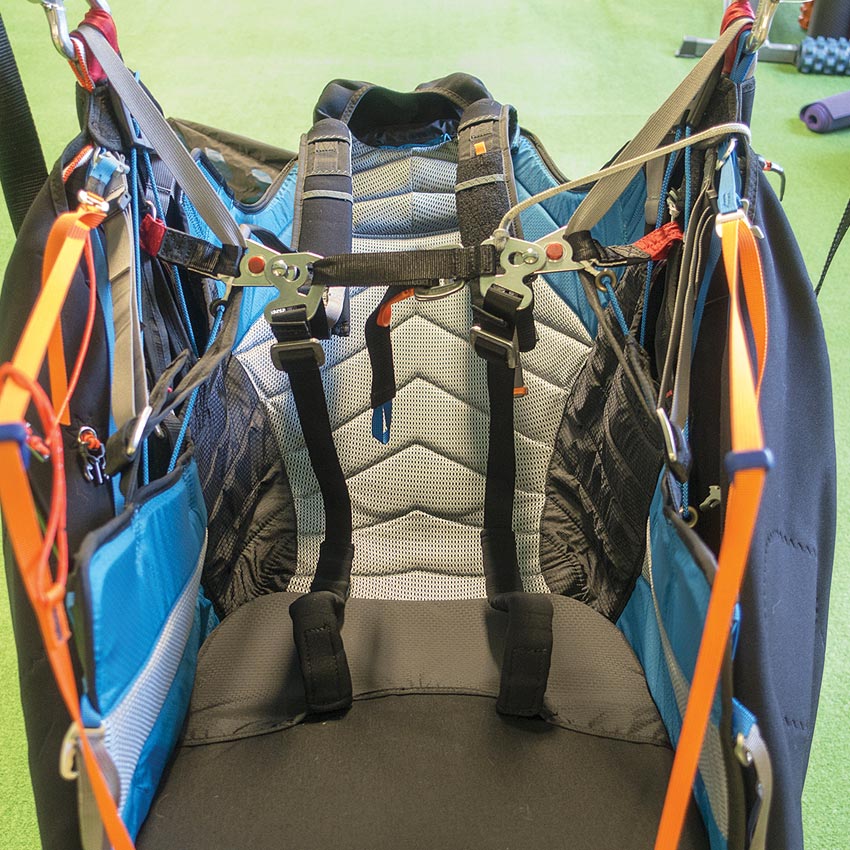 A plastic batten runs down either side of your spine giving the harness rigidity (and inflexibility when packing!)

As I stated, the stability system is very nice. It’s perfectly placed high up near the karabiners so you can operate it without having to remove your hands from the brakes. It is clever as it means they’ve got as much feel out of the harness as possible, knowing that you can quieten it all down at the pull of a string if it starts to get rough on glide.

The materials used seem high quality. Thick neoprene for the pod and hard fabric underneath for those dodgy tailwind landings… but the weight is still similar to its competitors – a little lighter, size for size, than the Genie Race 4 and XR7, and 2kg lighter than the Exoceat. 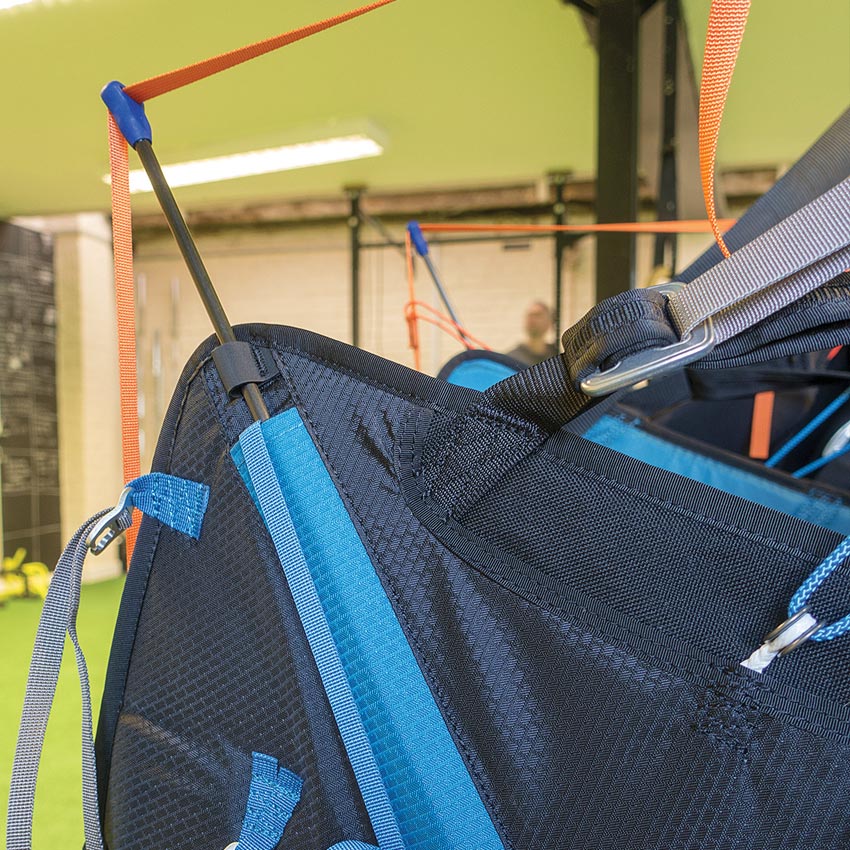 This is an excellent competition harness, which gives a really balanced, precise feel to your flying, damping out the unnecessary rock and roll. It does have some issues – including the zips and the back rods – and it is very greedy on bag space. I needed to go into therapy trying to fit it into my comp bag the first time. But all in all, it’s an amazing package.

The Exoceat was the most popular harness at the recent Superfinal in Colombia, but the Kortel takes the edge in being a chunk lighter and having the adjustable ABS system.

I think it will take some time for pilots to adjust their thinking around harnesses. When you think of the efforts designers make in reducing a few metres of lines from their latest gliders, it seems crazy not to make the harness as aerodynamic as possible. Your harness is half your aircraft, and the way it responds to turbulence and movement is almost as important as the way the wing does – particularly with high aspect D and competition wings. Stop laughing at your mate’s huge floppy fairing on the hill and give one a go.

Q&A: ‘Harnesses have had to adapt’

The harness is immediately really comfortable – the geometry is great, and the roll response is very smooth. I’ve never flown in a harness that is so precise to turn in weightshift  – it is the most co-ordinated I’ve ever flown. Even so, with the ABS system completely loose, I found the harness very damped and balanced – I never got ‘thrown’ off position. As such it is lovely in thermals, and even in weak thermals it gives a nice amount of information. Was this a specific goal? Any insights on how this was achieved?

Yes, the goal was to have a very smooth harness on the roll axis. The old Kanibal Race was a bit too vivid, too on/off in its roll movement for the modern gliders. It was OK with older glider designs, but gliders have evolved. So the harnesses have to adapt to this evolution. Explaining how we achieved that is not easy. But it’s tons of hours of flying, testing, geometry adjustments with each glider, to understand their behaviour and adapt our design.

Everything on this harness has been made for performance. But performance comes with several parameters… drag reduction with the fairing, energy loss reduction in the way the glider flies, saving energy for the pilot with leg support, weightshift assistance, and getting the right information at the right moment thanks to the huge cockpit.

Tightening the ABS is a way to improve your efficiency in glide. When your hands go up to grab the Bs, you tighten the ABS. Like that your aircraft (your glider and harness) is more stable, less prone to buffeting by the airmass, and you gain in glide efficiency. When you reach a climb, as you drop one hand down to initiate your turn you unlock the ABS on that side, and when the second hand goes down, you unlock the other side.

When you know that your thermal is finally stable enough and it’s going to last for a while, you tighten the ABS on the outside: it gives an angle to the harness and helps weight shifting. We also worked hard to have this system handling as natural as possible. There’s no need to release the brake handles or make any additional movement.

The speed system travel was not very smooth. I wonder if the thick cord diameter makes the travel more abrasive? Why it is designed this way?

Yes, there are two explanations for this. Firstly, the large winch pulleys add effort when pulling, as does the way the speed lines have to travel around the seat plate – and the tube is here to protect the fabric abrasion.

But the way we use the speed system with modern gliders has changed too: before, we were pumping on the speedbar to control pitching. Not anymore: you push the bar, your legs stay straight, and you control everything with the Bs. This friction adds a little effort when pushing, but reduces drastically the effort for holding the bar out. It drops down from 20kg of effort to around 4-5kg of effort to hold the position.

Luke Nicol is a professional hang glider and paraglider tandem pilot. He’s flown in the Class 5 Hang Gliding Worlds, and started competing in paragliding in 2017, qualifying for the PWC Superfinal in his first year. Luke weighs 88kg and currently flies an Enzo 3 and AIR Atos.