The glider felt taut and even at full-fast speed it showed no sign of deflation or nervousness. Photo: Gareth Bird
Paramotoring, Reviews

Lawrie Noctor gets to grips with the Gin Vantage 3, a PPG wing that can also be free-flown, aimed at new pilots and above

Looking back through the previous Vantage models it’s clear Gin have been constantly updating their design and materials in order to create the best possible wing for the intermediate/EN-B type pilot. The original Vantage was released in 2012 and was intended for intermediate pilots looking for good performance and handling, so it is interesting to see how the latest iteration has developed.

For powered testing I used the 24m Vantage 3 with the Parajet Maverick/Moster. I am 112kg all-up, including around six litres of fuel, giving me a wing loading of 4.66kg/m2. For free-flight I used my Woody Valley XR7 harness, a loading of 3.86kg/m². 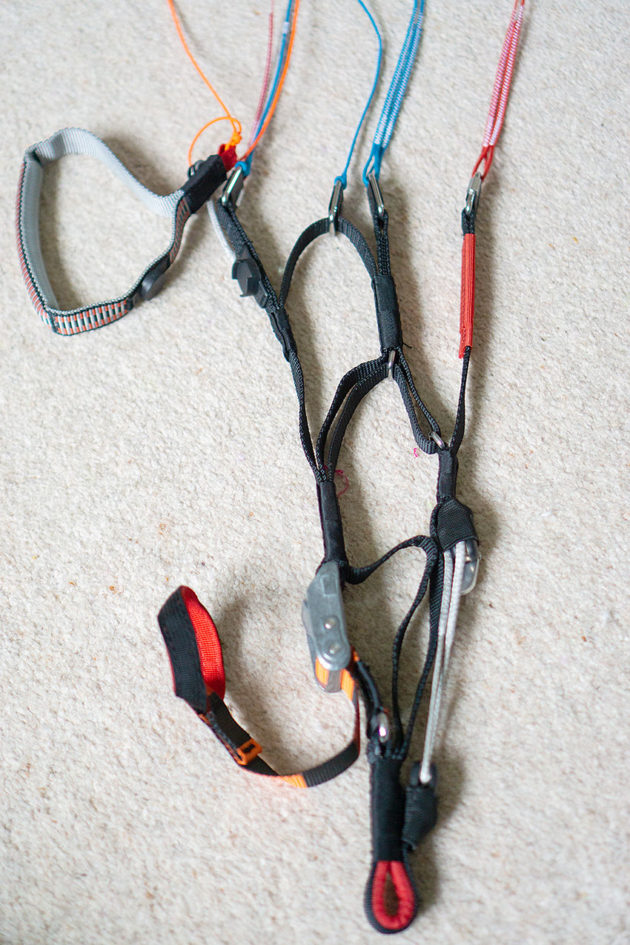 Just by comparing the numbers of the Vantage series it’s clear to see that Gin have been homing-in on the best set-up for this EN-B paramotor/paraglider wing. Looking at some of the easiest specs to compare, the original Vantage had a flat aspect ratio of 5.37 and weighed 6.2kg. The Vantage 3 now comes with a more modest flat aspect ratio of 5.05 and weighs only 4.6kg – a whopping 35% lighter. This is with only 12% fewer cells, so the construction has certainly been refined. The most obvious other change/improvement is the change from a four-line set-up to three-line set-up, which was made from the first to the second model. 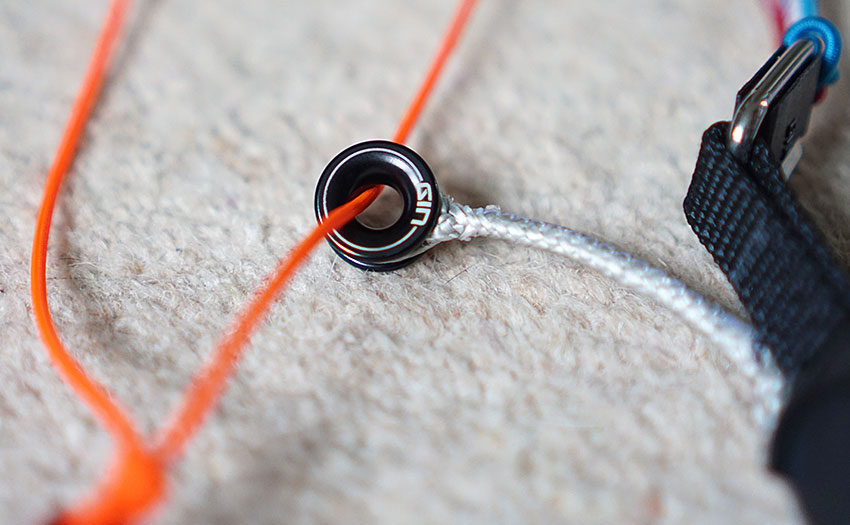 The trim system has colour-coding to make matching side to side easier and was fairly easy to use in flight. The brakes have magnetic poppers which I found a little frustrating as the magnet was not as strong as it could be. Also, because the riser section is shaped it made it slightly harder than other systems to locate in place quickly in flight. This is by no means a game-changer for me but it would be great to see it addressed.

The glider comes with an additional lower low-friction ring, to accommodate a wider range of paramotor geometry set-ups high to low. As the wing is in the lightweight class it uses small pulleys for the speed system. Although this makes sense from a weight perspective, I would personally have preferred to see a bigger diameter pulley on here. 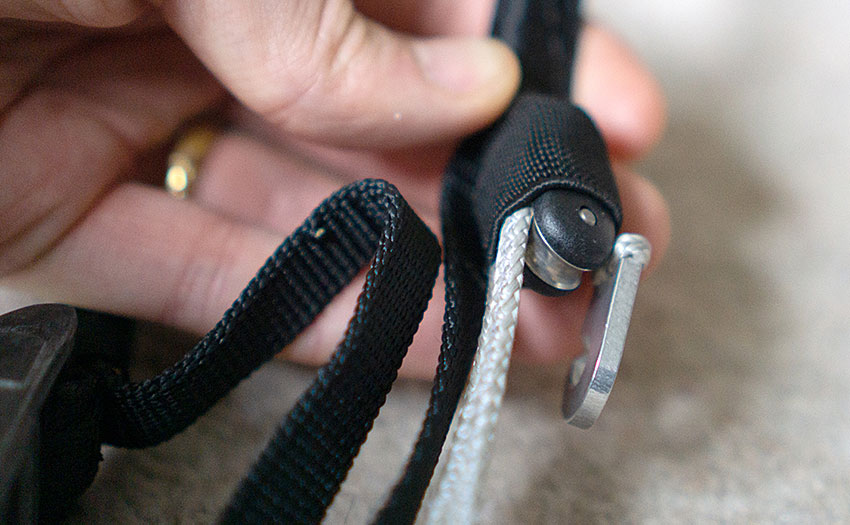 Small pulleys are used for the speed system

In terms of the wing we see quite a few changes here too. The upper leading-edge is still made of the durable but slightly heavier Dominico 30DMF. However, the upper trailing-edge and lower surface is made from lighter 20DMF. This is very noticeable on the ground and when launching but I will come onto this shortly.

The leading edge has a quite pronounced sharknose with the reinforcing plastic running from the leading edge to the trailing edge, but only on every other cell or so. I was surprised to see this as you tend to see this construction method (leading-edge to trailing-edge plastic rods) on higher-end wings like CCC class. The leading edge was not as clean as other gliders in the same class but felt relatively efficient in flight. 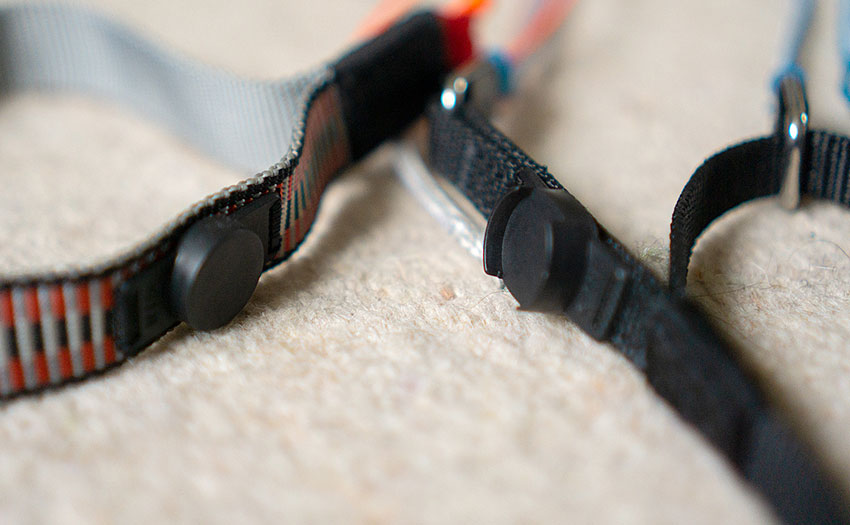 Magnetic poppers on the brakes

This has to be one of the Vantage 3’s key selling points. The wing is very easy to launch in light to nil-wind and requires no special techniques in order to do this. Even if the wing isn’t laid out in the best way I found it still inflated well and, due to the light cloth, only needed minimal forward speed to keep it inflated if you needed to clear lines or cravats etc.

During stronger winds or hill launches whilst paragliding though, due to the light cloth it needs a little more finesse and care on the ground. The brake range meant you could come off the ground very quickly without the ‘mushy’ feel some gliders give you. The wing felt like it produced strong lift early in its airspeed range giving you that good taut feeling from the wing which was a confidence booster. 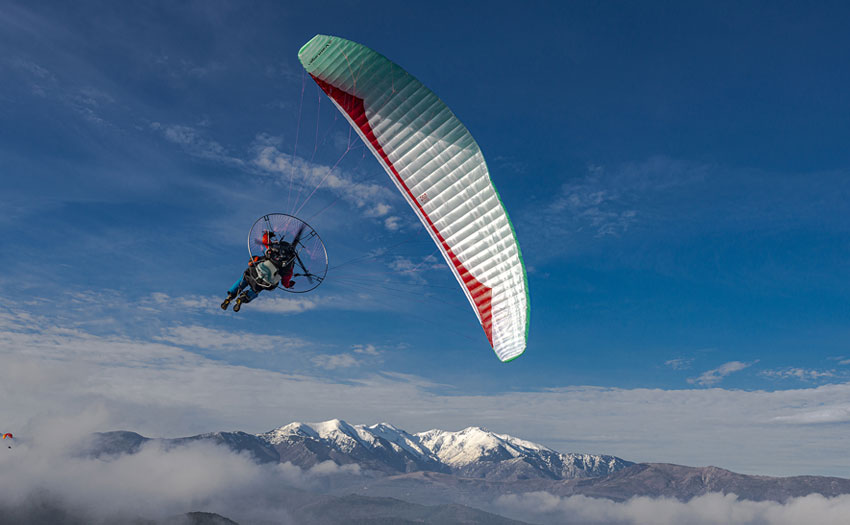 In the air: paramotoring

As soon as I got airborne for the first time I had a grin as the turning and brake pressure was just how I like it – on the playful side. Brake pressure was on the mid-to-light side and the factory-set upper low-friction ring was perfect for use with my Parajet Maverick Moster. During all speed testing it was midday, high pressure, inverted type weather so not the smoothest. Throughout this the glider felt taut, and even at full-fast speed setting it showed no sign of deflation or nervousness.

In terms of speed I used the following methodology for working out calculated airspeeds. First, I would climb to 1,000ft AMSL and fly three uniform full 360s. This way XCTrack could calculate the wind speed accurately. Then I flew between two turnpoints 2km apart four times (at each trim setting) and at each turnpoint complete a further three full 360s to keep windspeed updated. On analysis I could average the speed for each of the trim settings. This is what I found to the closest km/h.

Compared to similar-class gliders, this is marginally faster at the mid- and top-end. During speed testing, however, I did find that rolling oscillations were present throughout. This was a little annoying as the glider itself felt fairly resistant to collapse through turbulence, however, the rocking made the flight not as enjoyable as it could be as constant input was needed to correct.

Engine-induced oscillations are possible for all paramotor wings, and you will usually find a warning about them in the glider’s manual. In the Vantage 3’s case Gin explain oscillations can “typically occur at full power” and attribute them to different configurations of weight, prop diameter, engine power and hangpoint positions. “The greater the engine power and prop dimensions, the greater will be the oscillations,” they say. “The best way to handle this is to release the throttle and release the brakes.”

Even when trying to be as still and relaxed as possible however, I found no matter the trim or power settings, I couldn’t shake the oscillations. 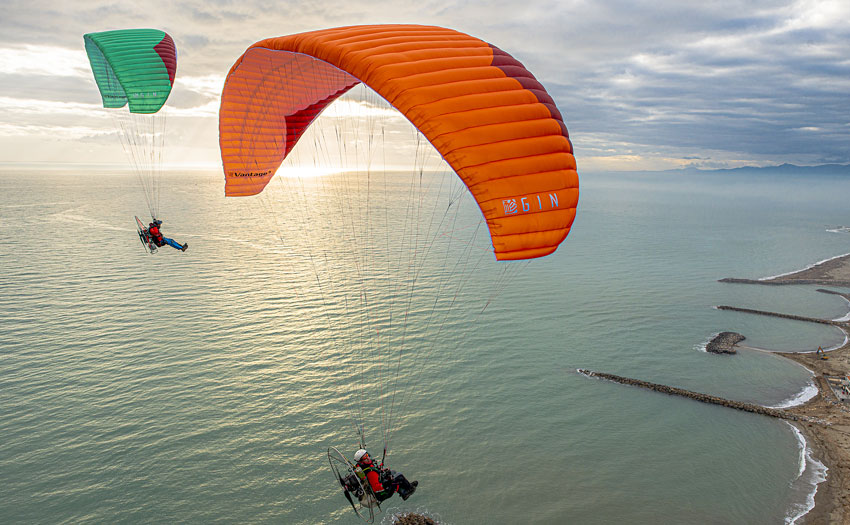 The new Vantage is the third in the series since it was launched in 2012. Photo: Jérôme Maupoint

In the air: paragliding

I was lucky enough to get the Vantage 3 out in the hills as well, with 3m/s thermals and 10-15km/h wind. I was looking forward to this as the general handling under motor was nice. It did not disappoint: the fun handling meant it was easy to position the wing in boisterous thermals. During both smaller organic and bigger induced-pitches the wing felt pitch stable, only requiring small dampening from the pilot.

In terms of glide, I didn’t get to test this extensively, but at initial glance and a few tests against other similar-rated gliders it didn’t feel outpaced. In fact one transition between two sections of hill on my local site during marginal conditions was relatively easy. 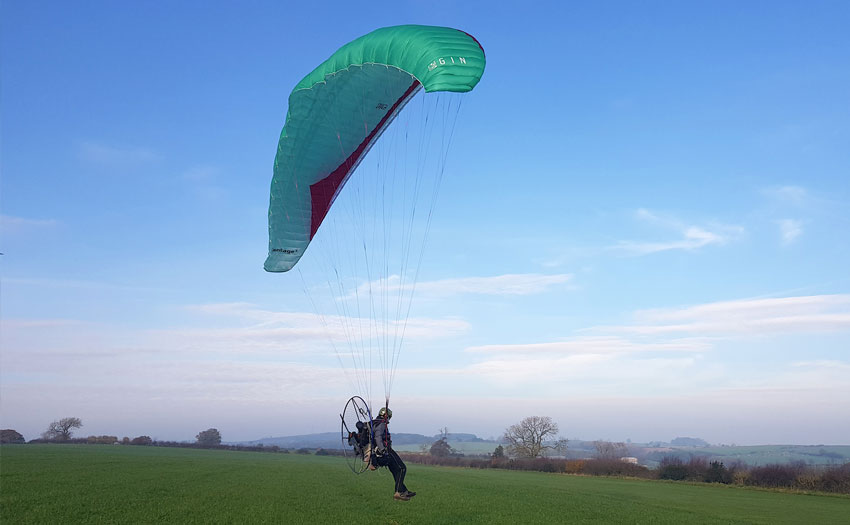 Landing is a non-event for the more experienced pilot and for the lower airtime pilot the glider has plenty of brake travel and usable speed to cover those who might inadvertently start the flare early.

Overall, I enjoyed flying the Vantage 3. The handling made both paramotoring at trim speed and thermalling while free-flying really fun and intuitive. Unfortunately at speed I could not shake the oscillations, so I couldn’t really recommend it for pilots who want to fly long XCs. However, I would definitely say it’s  a good choice for those pilots who are comfortable flying at the higherend intermediate and who want a wing with good handling that is intuitive and fun to fly in both PPG and paragliding.