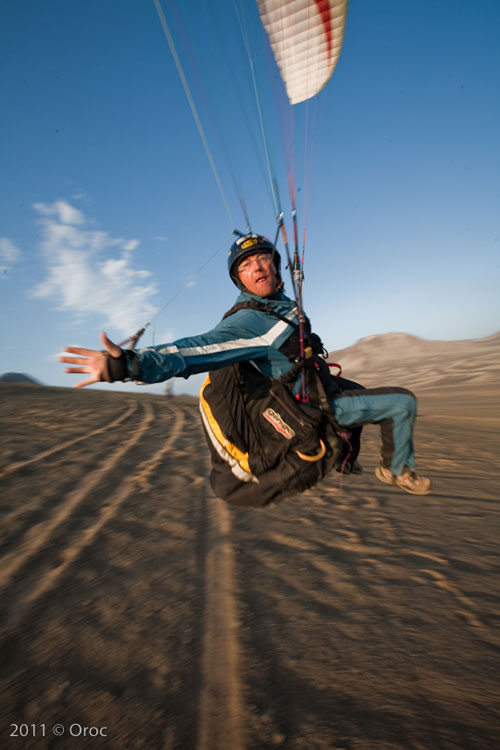 Xavier having fun at the dunes of Huamey on the coast before his disappearance. Photo: James 'Kiwi' Johnson

The PWCA, which is coordinating the search for Xavier, has confirmed that Xavier’s body was found at 12.23pm Peru time (5.23pm GMT) on 7 July on the west face of Huascaran Norte at 4,700m by the PWCA aerial search ream.

They suggest that the “most likely” scenario is that Xavier was taking photographs when he lost control of his glider and crashed. They add that it looked like Xavier had opened his reserve but he “quickly died from his injuries”.

The aerial search organized and led this morning (July 7th) by Mike allowed to find Xavier’s body at 12:23 (local time). Xavier was found in the west face of the Huascaran Norte (6768m) at an altitude of 4,700m.

The most likely scenario is that Xavier was taking some pictures of this impressive mountain when he lost control of his paraglider. It looks like he opened his reserve but he quickly died from his injuries.

Again we want to express our deepest sympathy to the family and to all the people that he inspired during his engaged and exciting life.

A zoomable Google map of the area with markers of the relevant locations in the search for Xavier Murillo. Click on a marker for more information. If you can’t see a map, refresh or try a different browser.

View XCmag: The search for Xavier Murillo in a larger map

Despite a report yesterday that indicated that Xavier had been seen flying over Huaraz late on the day he disappeared, an aerial search led by Michael Christiansen for the PWCA this morning (Thursday 7 July) has reported locating the glider of Xavier Murillo at around 4,800m on the slopes of Huascaran Norte (6,655m), the second-highest peak in the Cordillera Blanca. Recovery efforts with local guides and search-and-rescue have already begun and Xavier is presumed dead.

X-Andes organiser Peter Chrzanowski elected to depart Huaraz yesterday, leaving all search-and rescue responsibilities to Christiansen, despite having been responsible for inviting and paying for Xavier to participate in the X-Andes reconnaissance. Having been advised that he should stay till Xavier was found, Chrzanowski cited financial and health reasons for his departure.

I would like to extend my own condolences to Xavier’s family, and I will leave the obituaries to those who knew Xav better than me. But I will say that a better travelling companion and more enjoyable human being would be harder to find, and I’m glad that I got to know him well enough to call him a friend.

This was not the news we were hoping for, but the worst of the mystery has ended, and now offers some resolution to those who loved Xavier, and to the hundreds if not thousands of people whose lives Xavier touched through his own extraordinary existence.

James Kiwi Johnston has sent us this brief email from Huaraz, Peru:

An aerial search has discovered Xavier’s body high on Huascaran Norte. It may take a couple of days for a team of guides to bring him down, he’s that high up. Kiwi.

At 6,655m Huascaran Norte is the second highest peak in Peru. It is heavily glaciated.

Kiwi Johnston was flying with Xavier on the day Xavier disappeared and has reported here on the search for him since then. We will post further reports from him as soon as we have them

It is with the heaviest of hearts that we report the discovery of Xavier Murillo’s body in Peru.

No details of what caused Xavier’s death have been released as yet.

Mike just reported to Laura that they found Xavier.
Unfortunatly all is over and Xavier is dead.

We just contacted the family.
I cannot find the words right now to express the sorrow.

My thoughts are with the friends, the family of Xavier as well as with all people that helped or contributed to the searches during this last stressfull days.
Thanks to all of you.

Cross Country magazine conveys its greatest condolences to Xavier’s friends and family and thanks everyone who have been involved in the search efforts to locate him.

Xavier: you will be sorely missed by us all. RIP.

More at these links

• All our news on Xavier Murillo

• Comments are open below