James ‘Kiwi’ Johnston reports from Huaraz on the latest development in the search for Xavier Murillo, lost in Peru since Friday 1 July 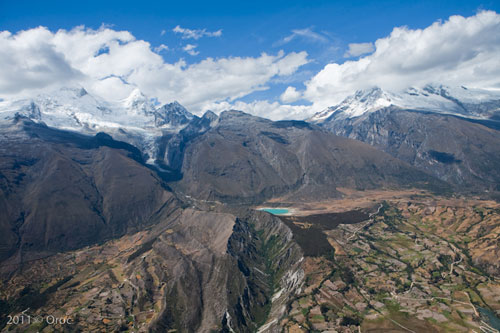 Huandoy and Huascaran on the day Xavier disappeared. The search area has now shifted 60km to the south. Photo: James Johnston

For the first time since Xavier Murillo disappeared on 1 July 2011, seemingly solid information has been provided which will give some direction to search-and-rescue parties and airplanes tomorrow [7 July].

A local 19 year-old boy from a village northeast of Huaraz has reported seeing a white paraglider flying high over Huaraz around 5.30pm on the day that Xavier disappeared, heading in the direction of the mountains and valleys south of Lago Churup.

In an interview at the Police Station in Huaraz today with Mike Christiansen, Jeff Cristol, myself, and local members of the police and search-and-rescue, the teenager gave detailed information that convinced us all of its veracity. (Significantly, the boy came forward with the information (to the local Casa de Guias) before a reward was offered.)

Thanks to the information provided and in conjunction with Jeff Cristol’s considerable local knowledge of the area, an aerial search will start at 6.30am Thursday morning in a specially outfitted plane flying in from Pucallpa, a city in eastern Peru, while a search-party of over 30 people will be dispatched to two or three of the long canyons that lie in this sparsely populated area. (On Wednesday they were searching in the Huandoy area where we had last seen Xavier).

The boy reported that it was very windy on the ground, so we are thinking that Xavier may have been heading for the higher ground behind Huaraz in search of a safe landing spot, only to be forced up one of the long and narrow canyons. Since the majority of this area is considered to be ‘low-ground’ (ie below the snow-line), and is comparatively sparsely traveled or populated when compared with much of the rest of the valley, this significantly increases the chance that Xavier may still be found alive – a possibility that seemed very unlikely yesterday.

Mike Christiansen, an American pilot who lives in Chile and who has been asked to coordinate the search for Xavier by the PWC, has clearly done a good job of getting the local Police and Search-and-rescue on board since arriving last night.

Here in Peru, search-and-rescue operations must be paid for, and Mike is doing his best to mobilize the greatest number of searchers with the funds available. The local Search-and Rescue (which is a police unit) is severely in need of equipment, so any climbing equipment, climbing clothing, rescue-gear etc manufacturers who are able to donate equipment to this unit (on behalf of Xavier’s rescue) can be assured that this strategy would result in an immediate increase on the manpower on the ground, as well as preparing this unit for future rescues. The centralisation of our efforts here in Huaraz can only increase the chance of Xavier being found.

News that a reward has been offered was met with mixed feelings by the local police and rescue officials, since in the past this has resulted in a vast increase in false leads with little positive results. While it is hard to conceive that the main trekking and climbing area in Peru does not have a rescue helicopter, (when in Alaska and Canada they are regularly sent out for beer and toilet-paper), this is an example of how poor of an area we are operating in.

The money being raised for Xavier’s rescue is probably currently best used by mobilising as many searchers on the ground as possible while we wait for any air support we can get.

On behalf of all of us here in Huaraz, I would like to thank all of those who have given their support.

Correction: I initially reported that we had accidently ‘discovered’ the Cerro Huandoy launch a few days before Xavier’s flight and disappearance. This is apparently incorrect, since a Lima based pilot Heinrich Berg reports that he (and others) flew back to Caraz from this site some two years before.

• All our news on Xavier Murillo