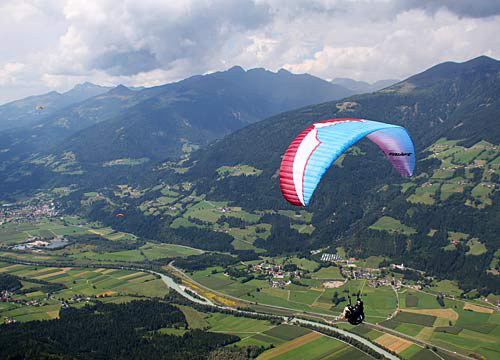 Berkhard Martens and his wife Renate Brümmer, better-known as Nina, each flew their paragliders to new German records in August.

On 17th Nina flew an 82km out-and-return on her LTF 1-2 Ozone Swift from Emberger Alm, Austria. Two days later Burkhard Martens flew a 100 km speed record round an FAI triangle on his Gin Boomerang, taking off from Speikboden in Alto Badia, Italy. His average speed was 25.8 km/hr, almost 4 km/hr faster than the previous record, set by Stefan Traut in 2000. After closing the triangle he then flew the Ahrn valley out and return, giving a flight distance for the national XContest of 147km.