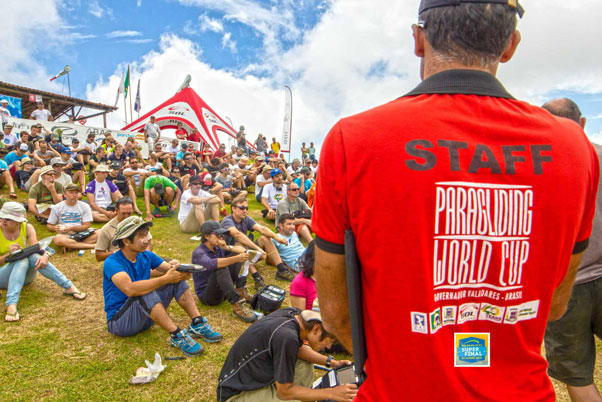 Is this the unluckiest Paragliding World Cup Superfinal in history?

First the rain fell so hard and so destructively at the original competition venue that organisers were forced to shift the entire comp at short notice 200km to Governador Valadares.

Then, after a brilliant first few days flying in classic skies a political storm hit, engulfing the competition in a different type of deluge.

Like a bolt from the blue it was revealed that the trailing edges on three of the Enzo 2s were out by at least 40cm.

That is, they were 40cm longer than they should be.

All gliders in the Superfinal – the world’s highest calibre paragliding competition – are required to be certified.

This means all comp gliders, including the Enzo 2, are certified EN D.

To prevent cheating the organisers of the Superfinal measure different elements of the wings belonging to pilots who win the tasks. This is to check for ‘tweaks’ that might make the glider go faster and give an unfair advantage.

In a result that sent shockwaves through the comp scene, upon measuring the trailing edge of the Enzo 2s belonging to early task winners Stefan Wyss, Yassen Savov and Pepe Malecki, organisers found they were all out by at least 200mm each side.

The trailing edge is measured from the centre of the trailing edge (the back of the wing) around the curve of the glider to the wingtip. It is reportedly done with an accurate laser measuring tool.

The Ozone Enzo 2 certified and measured by Air Turquoise has a trailing edge length of 6,612mm. 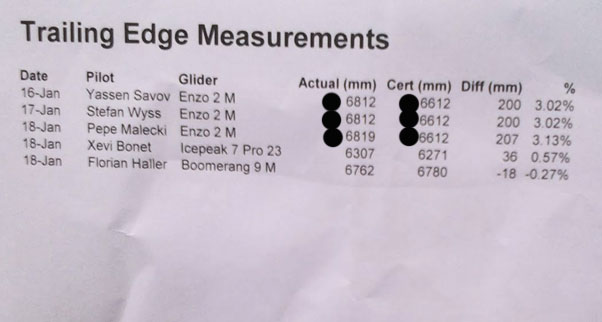 The trailing edge measurements from the Superfinal 2013

The implications could not have been more serious. Ozone was point-blank accused of cheating – supplying ‘tweaked’ gliders to its top pilots in a bid to help them win – and pilots faced having their highly-valued scores turned into worthless zeroes.

The Paragliding World Cup Association meanwhile suddenly looked like its showpiece competition of the year was about to be turned into a political quagmire, with wrangling between manufacturers, test houses and rule-makers overshadowing the performance of the elite pilots on the ground.

With accusations flying the PWCA asked testing house Air Turquoise to measure the glider they have in store. Air Turquoise is a major paragliding certification and testing centre and is where many manufacturers send their wings to be certified. As part of that process the ‘test glider’ is kept in-house by Air Turquoise, so they can refer to it in case of problems.

Alain Zoller is the chief test pilot. He is on record as saying that the EN system is not fit for purpose when it comes to certifying comp wings. Indeed, he was even seriously injured while testing a prospective competition glider in November 2011. However, with a dedicated Competition Class certification still in development and some way ahead, there is little other option.

On Wednesday 22 January Alain measured the wing in Air Turquoise’s loft and confirmed that the trailing edge was indeed 30-40cm less than the wings at the Superfinal. He even went further, and suggested the whole competition should be cancelled. 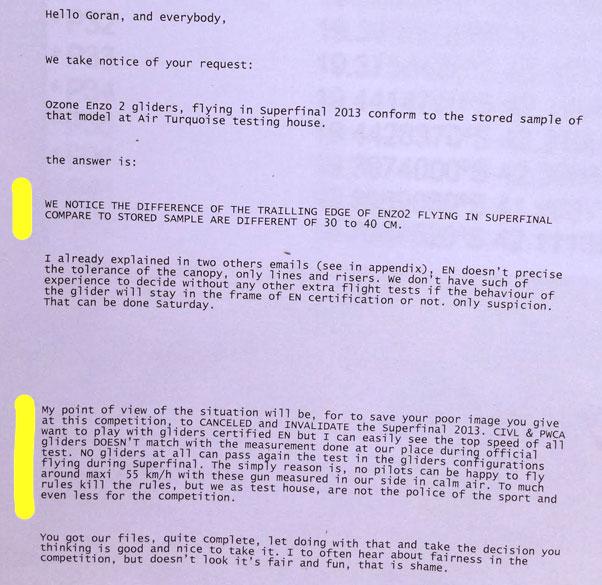 Alain Zoller’s email to the PWCA. He confirms the Enzo 2 they have has a different trailing edge length – and suggests the whole competition should be cancelled.

The result was another shock to the pilots in Brazil. Many had been hoping the figures were a paperwork error on the part of Air Turquoise, but it now looks like something else.

Some suggested it could be a production error that has affected all the gliders that have rolled off the production line. Around 100 Enzo 2s have been made.

Others suggested Ozone deliberately lengthened the glider’s trailing edge post-certification, to give it even better performance.

The need for an answer now hangs over the Superfinal, and the results of the competition – and a manufacturer’s reputation – depend on them.

Ozone have declined to comment publicly until they have reviewed everything to their own satisfaction and understand what has gone on. That includes test flying an Enzo 2 with the longer trailing edge, to see if it conforms to EN-D certification. They have said they hope to make a full statement before the competition in Brazil is finished.

Meanwhile, in the wake of it all, the PWCA have come down firmly on the side of the competitors and the sport.

Speaking to pilots on the hillside PWCA organizer Goran Dimiskovski said: “Somebody with a non-certified glider could win, and that we will not allow.”

The way things stand today, going into the penultimate task, that is far from clear.

For the pilots then, a great competition has been overshadowed by politics. The flying might be fast and fun but the back story is anything but. Laurie Genovese summed up the mood writing on her blog Bip-Bip: “I thought we had hit bottom in 2011, but no, we still dig.”

In the results, after seven tasks of between 60.7km and 87.4km, Joachim Oberhauser is leading, with Seiko Fukuoka Naville leading the Women’s Class.

• This article was updated at 17:18 with a correction regarding certification: “The Ozone Enzo 2 certified and measured by Air Turquoise has a trailing edge length of 6,612mm.” It is unclear at this point in time whether the difference is enough to take the Enzo 2 out of certification, until flight tests are performed.