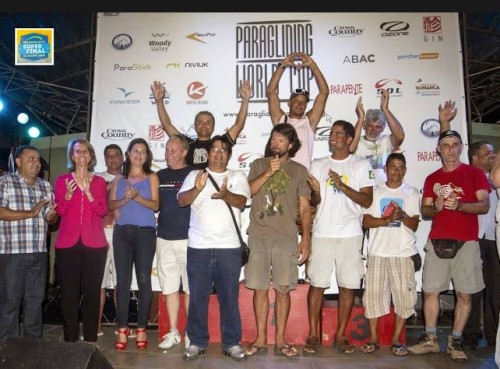 The provisional winners: the ABVL organisers at the Superfinal celebrate at the podium. Photo: Ailton Catao

In the Women’s Class Japan’s Keiko Hiraki (Enzo 2) won, ahead of Seiko Fukuoka Naville (FR) and Nicole Fedele (IT).

Overall winner Francisco is only 23-years-old and made some bold and risky moves in the final moments of the competition to secure his victory.

The event was characterised by short, fast races. On the longest task – just under 100 km – up to 50 pilots arrived in goal within five minutes.

While the prizegiving happened last night, the results remain provisional. Organisers have demanded that the top gliders be sent to EN test agency Air Turquoise for verification that they conform to the EN-D standards required.

Earlier in the week, Air Turquoise’s Alain Zoller said the competition should be invalidated. “I can easily see the top speed of all gliders doesn’t match with the measurement done at our place during official tests,” he said. “To save your poor image you give, cancel and invalidate the Superfinal 2013.”

A few PWC pilots publicly withdrew from the competition before it finished. The majority of the field continued to soak up the amazing flying.

On his blog, Andre Rainsford appealed, “Don’t listen to all the garbage about how competition flying is dead or dying and pointless. Those commentators clearly have no idea what we do and why we do it at this level. They most certainly have not been drinking at the trough of abundance as we have in this task-laden competition.”

“Yesterday was a flying festival if ever I have seen one. We were sent downwind on a low-risk safety task of almost one hundred kilometres over some of the loveliest terrain below a gorgeous sky.

“The gaggles were co-operative, generous and enthusiastic often yelling with glee just about every time we climbed to base in the potent and smooth thermals conveniently marked by every cloud.”

The final results will be released in the next 2-3 weeks, according to the PWCA’s statement today. Among the worldwide flying community there’s a marked sense of empathy for the competition pilots for the lack of clarity.

The event has had several bangs, but many whimpers, too.