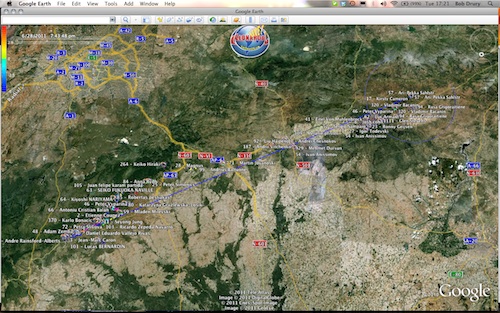 The first task of the Paragliding World Championships was a super-quick 154km blast to Arcones. Screengrab: live tracking

It’s been a big day for the Scandinavians with Sweden’s Matts Eliasson provisionally winning the first task of the 2011 Paragliding World Championships in a super-fast 2hrs 45minutes. The task was a 154km race to Arcones with no turnpoints.

Matts was just ahead of the Denmark’s Marcus Malmqvist and Brazil’s Frank Brown.

Pilots are now swarming into goal on a task that will, at over 150km, have been both massive and memorable for many. Live tracking and tweets from organisers show that pilots were gliding at 80km/h groundspeed during the flight.

Big respect to meet director Steve Ham and his team for calling such a huge task on day one of a major FAI Cat 1 event. Many would have opted for a quick scurry around the valley to warm everyone up and ensure big numbers in goal.

However, Steve, whose task-setting philosophy has always been one to never let a big day slip past, has opened these championships with a monstrous task that will no doubt be the talk in the bars of Piedrahita late into tonight, as well as many championships to come.