Ozone Chabre Open to use aspect ratio for comp classes

Organisers of the Ozone Chabre Open have announced they will be pioneering new rules for the different competition classes at the event in 2016.

The popular fun competition, now in its eleventh year, will use aspect ratio as well as EN-category to determine which class a glider competes in.

In an email announcing the registration date for the 2016 competition organisers wrote:

“Classes this year will be determined by [EN] rating and aspect ratio of pilots’ wings rather than just EN rating. We feel this is fairer.” 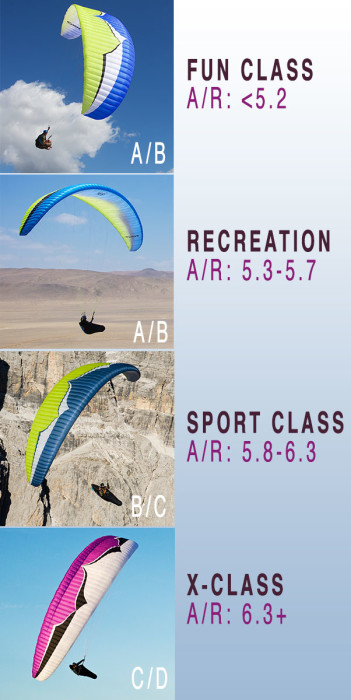 The new competition classes at the Ozone Chabre Open 2016 – based on aspect ratio rather than EN rating. Graphic: Cross Country Magazine

The innovation will mean pilots should be able to compete fairly against others on similar gliders.

Classes in competition are usually determined solely by EN class (EN A, EN B, EN C, EN D or CCC). However, recent advances in glider technology mean more gliders now squeeze into the EN B class.

In a competition, that often means pilots on intermediate wings fly in the same class as pilots on much more advanced XC wings. The change to include aspect ratio to determine competition class is one way of trying to make things fairer and tackle the migration of higher performing gliders into the EN B category.

For example, the Ozone Buzz is EN B and has an aspect ratio of 5.13 – under the new rule that will now be in the Fun Class.

The more demanding Ozone Rush is EN B and has an aspect ratio of 5.55 – that will now be in the Recreation Class.

The even more demanding GIN Carrera is EN B and has an aspect ratio of 6.2 – that will now be in the Sport Class.

Traditionally, all three gliders would have been in the same class as defined by their EN rating – EN B – despite having significant differences in performance and handling and the different demands on pilot skill.

The Ozone Chabre Open is a fun competition aimed at new XC pilots and those keen on getting their first taste of competition. It is held in Laragne in the southern French Alps each year and is sponsored by Ozone and supported by Cross Country Magazine.

Registration opens on 21 February 2016. See their website for details.