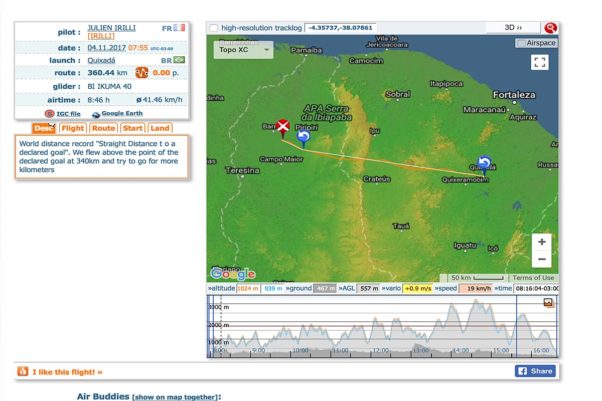 The record is yet to be ratified by the FAI, but Julien declared a goal at 340km, and the flight stands to take Honorin Hamard/Karine Gras’s 335.4km world tandem ‘distance to a declared goal’ record, set in November 2015, by a few kilometres.

Julien wrote on his Facebook page (translated from French):

It’s hard to summarise in a few words yesterday’s day when we went through all the possible emotional states imaginable … To put it simply, Katia Lafaille and I broke the world record for tandem distance to a declared goal (340km) at the end of an epic flight of 9:30 very turbulent in the mountain areas due to the strong wind and acceleration. The flight over our distant 340km from the starting point (Quixadá) was a huge relief. We savoured the next 20 km in this unique setting to land in a small hamlet lost in the background of the Brazilian countryside, at sunset! What a great moment .. Thanks to you Katia for your trust and your tenacity, we are a solid team! I found in the air with you the cordial spirit and all the values of this vehicle (that’s the word!), The record hunting and mountaineering are definitely of the same family! Thanks to all of our partners.

The record flight can be seen by clicking the image above, and Julien’s XContest 2018 flight summary, here.