Benoit Outters on the raft at the end of the Red Bull X-Alps 2021. Photo: Vitek Ludvik
Comps and Events

Benoît Outters was the fifth pilot to make it to the finish line in the Red Bull X-Alps 2021 on Wednesday, when he touched down on the raft at 8.42pm.

He was the only pilot to make it in on Wednesday, and could well be the last one to make the finish. As the last 24-hours count down the next closest pilot, Paul Guschlbauer, is 174km away with pilots spread out behind him across a further 350km.

Benoit pulled off an incredible feat of endurance to finish. Having deployed his Night Pass he hiked through the night and then continued to hike through the day. By the time he finished he said he’d had “two hours sleep in the last 39 hours.”

Atrocious weather dogged him for much of his last day, with storms, rain and thunder on approach to the finish at Zell am See. It was only as he reached the final turnpoint and signed in that a sliver of blue sky opened up behind the cold front, allowing him to fly down. He landed perfectly and gently on the raft shortly before 9pm.

After landing on the raft Benoit said: “It is a lot of emotion for me. I can not explain … I just have to sleep, it is time to sleep! I am very happy, very happy. In 39 hours I have slept two hours.”

On dry land he was greeted by the four pilots who had already made the raft ahead of him. Benoit’s official time is: 10 days, 9 hours, 12 minutes, 12 seconds 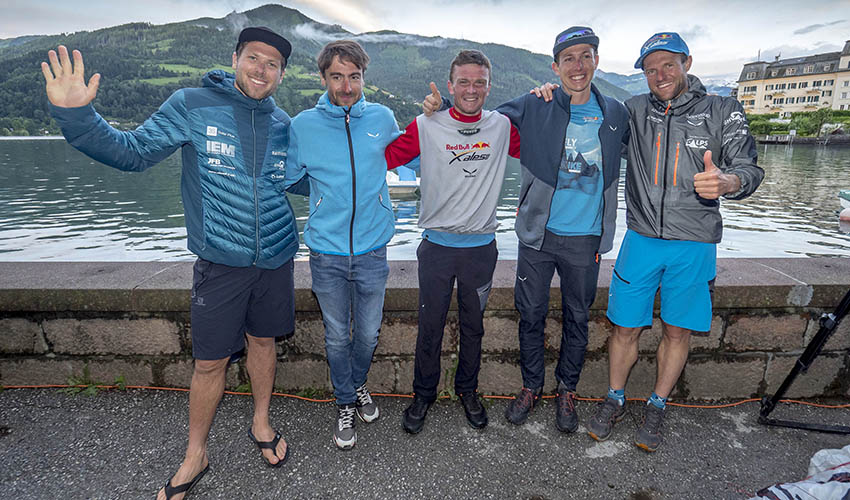 Meanwhile, as Benoit hiked, further back in the Aosta Valley and around Mont Blanc the pilots were enjoying good flying conditions, with six pilots in the air for at least six hours.

Four of them flew along the great lakes of Italy: Lago Maggiore and Lago di Como. They were Damien Lacaze, Ferdy van Schelven, Toma Coconea and Manuel Nübel.

Eduardo Garza made a different move, flying the north route from Mont Blanc toward the Rhône valley and then south again into Italy towards Domodossola. He was also in the air for nearly six hours.

With less than 24 hours pilots are still on the road and in the air. Follow them through the Red Bull X-Alps Live Tracking.