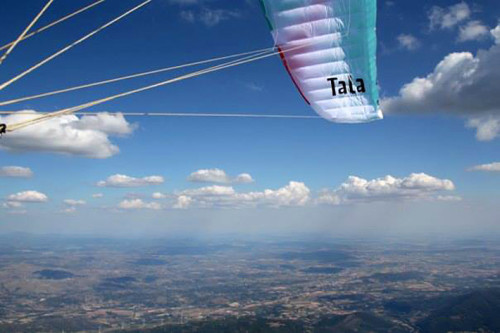 Marcus King reports from the sweltering heat and blue skies of the British Paragliding Open in Manteigas, Portugal.

As has become the norm for the Brtish comps these days, pilots from many countries descended on Manteigas in Portugal, drawn by its reputation for good organisation and high level competition.

Pilots gather from far and wide in Manteigas, Portugal, for the first eg of the 2013 British Paragliding Open. Photo: Tim Pentreath

The Manteigas region is mountainous, and even boasts its own ski resort. It’s a great launch pad for flights to the surrounding flatlands. Talk at the Welcome briefing was of early starts, long tasks, long retrieves and subsequent late nights.

The practise task saw most of the pilots on the lower launch for a quick 45km route around three turnpoints to a goal on the edge of the flats. It followed the mountain ridges but we quickly learnt the thermals were usually triggered on the lower hills. As we made our way to the final turnpoint the clouds over the high plateau became well established giving good strong climbs of up to 9m/s. From there it was a push out into the flats followed by a glide to goal which, as often seems the way, was lifty. 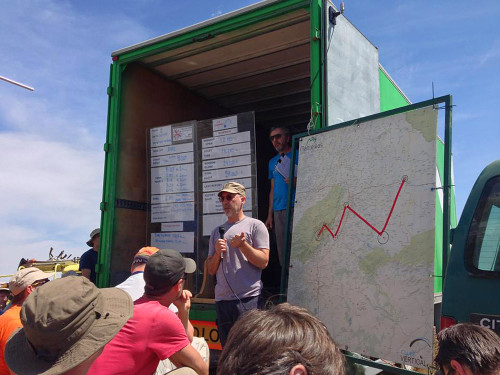 The first day proper saw us all heading to the high launch of Azinha where we found heat, dust and groups of pilots huddling in any available shade. A 110km task was called with two turnpoints in the mountains, and then heading off into the flats once they had started working for another three turnpoints. Clouds started forming early with a predicted base of 3,500m. Time to wrap up and sweat.

As the window open good clouds started to form and we were soon all hoiked to base and heading to the start. Everyone was skirting around the clouds, jostling for the best position, and boy, was it important to be up with the lead gaggle on this one. As the savvy pilots headed off from the first turnpoint the west wind came through taking with it the good clouds and replacing it with high cover. Those of us that weren’t quite on the ball found ourselves pushing into a strong headwind, in the lee, to get the first turnpoint. We were then flushed towards the flats where we some found good climbs, but were too far out to get back to the second turnpoint.

Out front the pilots had an easier time of it, with buoyant glides into the flats, but up ahead the clouds overdeveloped and the meet director stopped the task. Task winner on distance at the time the task was cancelled was sports class pilot Tim Pentreath on a Sigma 8. After corrections for altitude at the time of stopping he shared his win with Juan Becerra (VE) and Daniel Carvalho (PO). 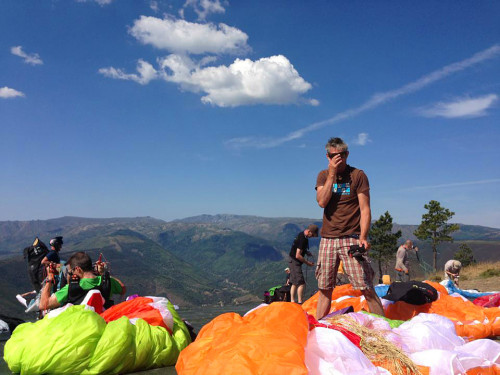 The second task saw us again on the large take-off of Azinha. A 102km task was called with three turnpoints in the mountains, then heading out on a 60km leg into the flats for a goal near the Spanish border. Base was predicted to be a lot lower, and as we took off there were no signs of any clouds on the route. Pilots headed towards the usual gathering at the start gate. Sadly at this point the radio burst into life: Former British Champion and female winner of the first task, Kirsty Cameron, had crashed into the hillside below launch and needed assistance. Later we were to find that remarkably she had got away with ‘just’ severe bruising.

Good climbs meant there was a large gaggle waiting at the start. As soon as the gun went, everyone went on glide for the first turnpoint. An impressive sight. While some struggled to climb on the second turnpoint, those that pushed out into the flats found better climbs. From there there was a run along the edge of the mountains to the final turnpoint. Thermals were plentiful and made this section easier.

Having rounded the turnpoint, pilots then had to throttle back as they moved out into the flats and crossed a wide river valley onto rising ground beyond. It was at this point that task winner Nuno Virgílio (PT) got away from the pack. As Adrian Thomas explained, he spotted a cloud and went for it, getting a 4m/s climb. When others tried to follow they found only 2m/s, and Nuno built a 12-minute lead that they couldn’t claw back.

The task saw nearly 100 pilots in goal and over 10,000km flown by the field as a whole. Nuno was winner ahead of Ronny Geijsen (NL) And Adrian Thomas (GB). The third task was cancelled after a long, hot and dusty wait on launch proved fruitless for most.

The event finishes on Sunday.

You can watch the Live Tracking here, and keep up to date with the daily results here.