345km across the Alps by paraglider 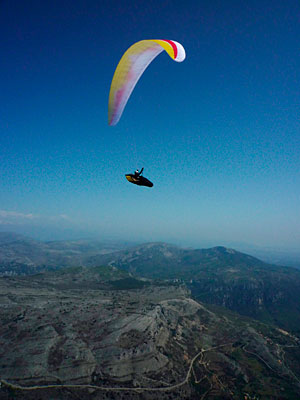 Ozone’s Luc Armant has broken the unofficial record for the longest ever mountain paraglider flight with a monster nine-hour flight through the French Alps on 6 May 2011.

Big distance flights of over 300km have traditionally been made in the plains where pilots can take advantage of strong winds to increase their downwind speed. However, big distances in the mountains are significantly harder and more dangerous to complete as strong winds in mountainous terrain creates violent turbulence.

Flights of over 300km are rare.

Flying with Ozone’s designer David Dagault, the pair only made a last-minute decision to fly that day when they saw the weather forecast, and dashed to Col de Bleyne, the southern Alps legendary big-distance site, with the latest R11 protos.

The French league, the CFD, have recorded the flight as only 339km, using one less turnpoint than the XContest. Their map clearly shows the route along the western edge of the Alps, right past Mont Blanc. 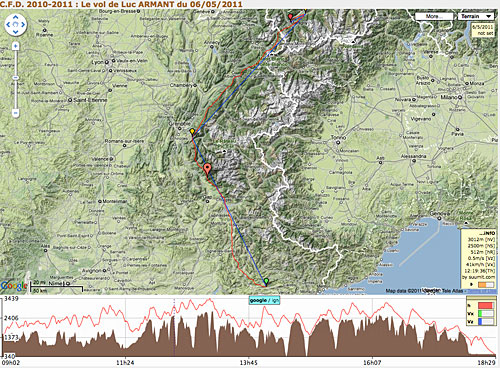 Luc Armant's tracklog from his 6 May flight, taken from the French league's website

David’s flight scored as 325.25km on the French XC league, or 330.20km on XContest, though both of them reached Sion in Switzerland together.

They flew different routes for the first half of the flight, but met up again in the Belledone (Grenoble area) and flew together from there onwards.

David says, “Conditions were consistent, the wind was good (stronger could have been scary), but cloudbase wasn’t very high at the start and we got a very slow end with lots of shaded area and rain!”

A strong northeast wind blowing down the Rhone valley put paid to the flight, and knowing that they could not get any further David spiralled down and landed near Sion. Luc headed back towards the southwest and flew an extra 16km, a leg which made the difference to his online and French league scores and meant that he beat the 333km Dav flew back in August 2009 to make what we believe is not just the longest flight ever recorded in the Alps, but in mountains anywhere.

The flight took almost nine-and-a-half hours to complete, with the two of them launching at 9am. Their maximum altitude was 3,500m, not bad but 1,000m lower than was being achieved on flights a few weeks earlier.

On the right day with ideal conditions, both Luc and Dav are sure that 400km flights are already possible.

Congratulations to both pilots on an amazing flight.