As part of his extended odyssey to fly much of the Pacific coast of the Americas, Jeff Hamann flies around Punta Mariato, the remote and jungle-covered southernmost tip of North America. 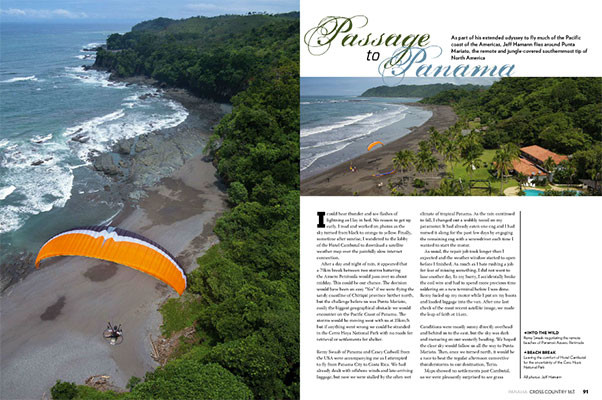 I could hear thunder and see flashes of lightning as I lay in bed. No reason to get up early. I read and worked on photos as the sky turned from black to orange to yellow. Finally, sometime after sunrise, I wandered to the lobby of the Hotel Cambutal to download a satellite weather map over the painfully slow internet connection.

After a day and night of rain, it appeared that a 75km break between two storms battering the Azuero Peninsula would pass over us about midday. This could be our chance. The decision would have been an easy “Yes” if we were flying the sandy coastline of Chiriqui province further north, but the challenge before us was Punta Mariato, easily the biggest geographical obstacle we would encounter on the Pacific Coast of Panama.

Join Jeff Hamann, Remy Swaab and Casey Caldwell as they fly the length of this isolated but spectacular part of the world. The full article is in Cross Country 163 (September 2015).