Mountaineers and climbers have grabbed the Run&Fly for the high mountains but it’s also great for trail runners. Photos: Marcus King
Reviews

This single-skin paraglider weighs less than 1kg. Charlie King takes it for a run.

Dudek’s Run&Fly caused something of a sensation at last year’s Coupe Icare, when pilots were invited to guess the weight of the little bundle that was attached to helium balloons on Dudek’s stand. Hailed as the “world’s lightest paraglider” the public were asked to guess how much it weighed. Most predicted it was going to be under a kilo.

The official stats are that the 16m2 size is 986g; the 14 is just 896g and even the biggest 20m2 size is less than 1.2kg. Impressive! We chatted to designer, Jean-Baptiste Chandelier there and then, and got in the queue to test one.

Fast-forward a few months and our test wing arrived. We expected a small package and it didn’t disappoint – something like the size of a self-inflating camping mattress. Four litres is the official volume. The wing was created, as its name would suggest, for people who want to run to their launch.

Of course Red Bull X-Alps pilots run with seven-kilo sacks so that it’s possible was never in question, but a joggling rucksack somewhat spoils a nice run, even if you do get to fly off afterwards.

The Run&Fly didn’t fit inside my running vest – that would have been ridiculous though I tried and it wasn’t a million miles off – but it went into a lightweight rucksack along with a String harness, and I found I could run comfortably with it. In fact I did some actual hill-repeat training sessions with it, then met Marcus on take-off to fly back down together – a new kind of fun game! 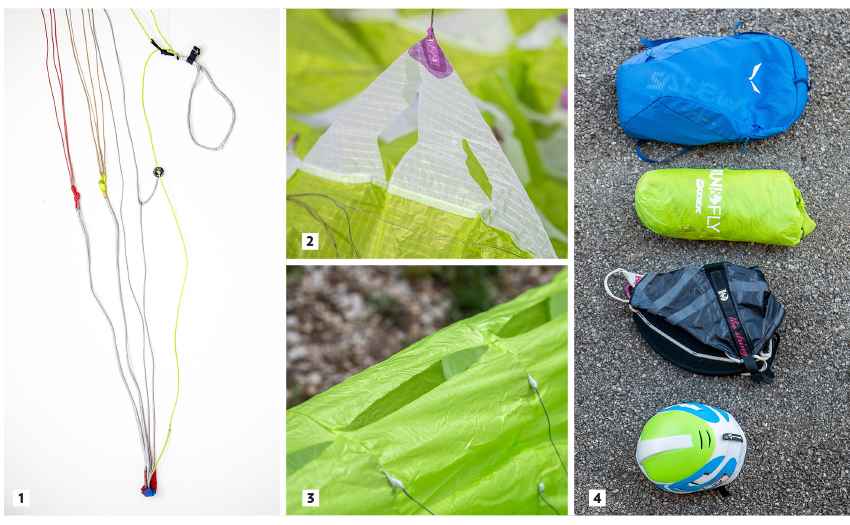 WEIGHTSAVING DETAILS: 1 Thin bootlace risers and brake loop; 2 Unsheathed lines, stitched to V-tabs which have weight-saving cut-outs in them; 3 Simple slits in the leading edge, no reinforcing stitching; 4 The glider, harness and helmet all fit in the small daypack

So, it’s small and light just as Dudek say, but how does it fly? Is there a catch, a compromise too far? I unravelled it and had a good look. Wow! It’s certainly made for lightness. Its single surface is Porcher Skytex 27, and the unsheathed lines are tied onto little material tabs which have cut-outs to further shave weight.

All four sizes have been load-tested to 108kg but I definitely felt it looked as if you should treat it carefully. Unsheathed lines take a little extra checking to ensure they are not knotted or caught around anything on launch, and they can be difficult to see, camouflaging with just about every kind of surface.

The glider has a fairly squat 4.8 aspect ratio, and the lines are nice and short so it doesn’t take up too much space on launch. Along the leading edge is a narrow tube of 42 cells whose openings are simple slits with no kind of reinforcement.

The brake handles are above little ring keepers, so effectively the brake lines are attached to the risers underneath. You can stuff the little brake handles into these rings when you pack away to prevent twists and tangles.

Dudek say there is, “No need to use the As to inflate the glider”, and actually I’d say “definitely don’t touch the As”. If you don’t touch them and just lean on the wing, whether forward or reverse launching, it comes up just fine and is, as Dudek say, easy to launch.

I began by insisting on trying to launch it with A-risers and repeatedly pulled the leading edge over on itself and had a frustrating time of it. It’s worth spending some time groundhandling this wing. I did: in our landing field on a windy day, and again on a light-wind day, and if you trust in the method, it’s a blast. 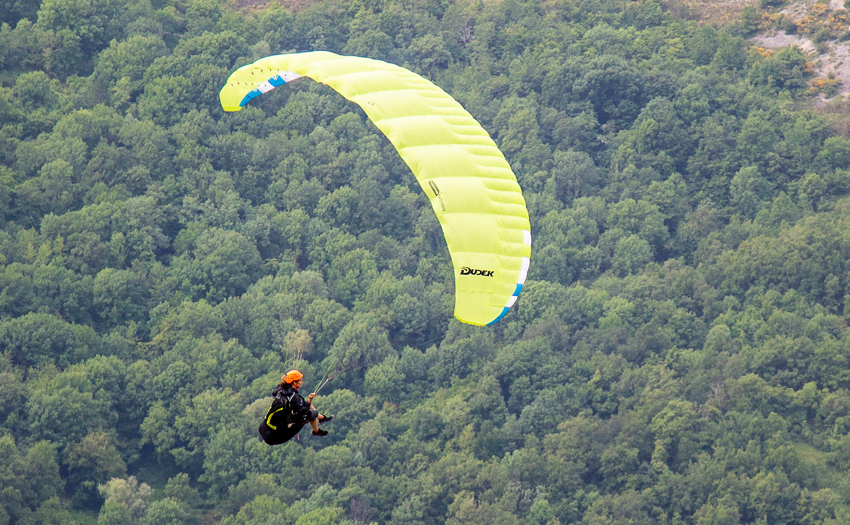 The wing is intuitive to fly and easy to land.

Once airborne it flies really nicely. At the Kössen Paragliding Testival earlier this year I chatted with other people who had also tested the wing, and they all mentioned some sail fluttering, but I hadn’t particularly noticed it. Or maybe it just wasn’t unexpected. It certainly wasn’t disconcerting or worrying in any way.

Like other single-surface wings (and actually plenty of double-surface wings) there’s not a lot of pitching about. You can feel movements in turbulence of course, but Dudek say it “auto-stabilises,” so you don’t need to worry about controlling every little movement. In fact they say it’s better not to if you want to maximise your speed.

As far as the controls go, I felt I was controlling the Run&Fly with the brakes quite low, but the amplitude of the brake movements felt perfectly natural and it was intuitive to fly.

It flies pretty fast hands-up. I didn’t measure the speed, but Dudek quote 42km/h on the 16 at 85kg (I was flying nearer 60kg but it fair trucked along). Dudek’s representative at Koessen explained that flying hands-up on the Run&Fly is like flying with bar on, and that the equivalent of trim speed is with some brake applied, so you can (should) use some brake to launch and you won’t be running the risk of stalling the wing.

Jean-Baptise elaborated, “To have something even easier, lighter and more intuitive, we didn’t add a speed system, so the wing is trimmed so that hands-up it is the equivalent of having 1/3 bar on an EN-B wing. For best glide you need to apply some brake tension.”

Landing is easy – it flares very well and deposits you back on the ground more gently than I was expecting. 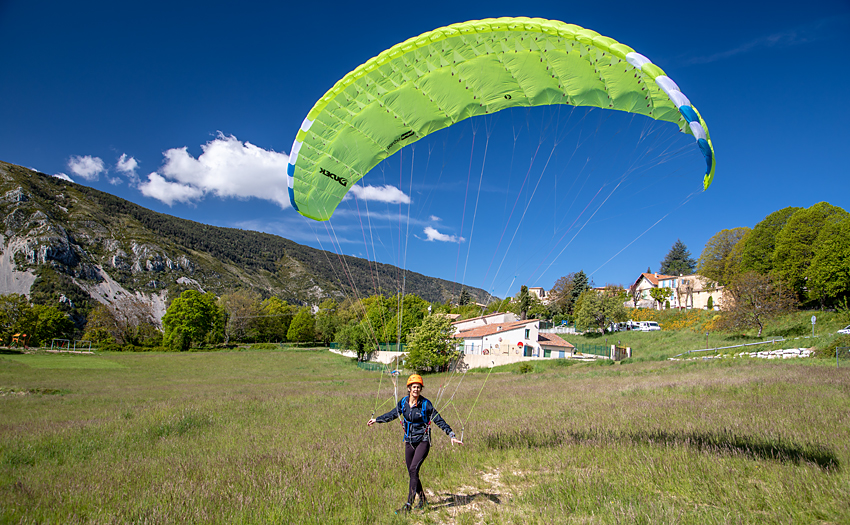 It flares very well and deposits you back on the ground more gently than I was expecting.

In conclusion I’d say this is a great little wing that is so small you can definitely use it to combine sports like running or climbing with a fly-down. Flying down is what it is designed for, rather than thermalling and cross-country, but it has decent speed and glide.

It’s still a specialised piece of kit though – it’s very lightweight, so you have to look after it, and the launch technique wasn’t what I was used to although with practice it is very easy. In fact Dudek say the 20m2 size is suitable for absolute novices, and report that students learning on it have found it very easy.

The third of Dudek’s aims when they designed this wing, along with it being under a kilo and having speed and flare comparable to other wings, was that it should be affordable, and they’re selling it at just under €2,000.