Let’s get stuck straight in there and try and answer the first obvious question: what’s it like compared with a Delta 2?

“Remarkably similar” is the quick answer. We loaned our review Delta 3 ML to a couple of pilots who’d logged over 150 hours each on the Delta 2. They both found the Delta 3’s handling a little lighter than its predecessor’s, and more precise, with a slightly faster rate of response. One, who’d moved on to an LM6, really enjoyed rediscovering the more agile nature of the Delta series.

Personally, I found three main changes. First, I used to get small tip tucks in rough air with the Delta 2 – these seem to have been banished for good. Second, the Delta 3 feels more pitch stable: it is nicely pitched forward, riding into the thermals in a very balanced way and it rarely gets knocked back. This reduction in oscillation translates to a marked performance improvement. Thirdly, it feels more solid and more geared up for flying at half- to full-bar. It feels like you’re setting off down a pair of train tracks when you push bar. More on that later.

Great expectations
A lot of pilots have high hopes for the Delta 3 because its predecessor smashed things up so spectacularly on its release – and continued to be competitive right through 2016. That kind of breakthrough has happened less than a handful of times in paragliding: the Nova Mentor 2 being another example. So, much like with the Mentor 2, you’d be wiser adjusting your expectations. It’s an evolution, with refined handling, and better performance at speed, and a slightly higher top speed… a high quality thoroughbred performer in the C class.

So, why did it take so long to develop? Remember the folding lines debacle? Well, the Delta 1 and 2 were designed with such strong leading edges they needed extra lines attached to properly simulate collapses. Folding lines were subsequently banned for C-class wings. The industry was split: some brands thought folding lines were the devil’s work, while others said it shouldn’t matter how a collapse was induced: it’s the reaction and recovery afterwards that’s important. Anyhow, this, plus the fact that the curve in paragliding development does now seem to be shallowing, led to a four-year process involving 50 prototypes (“fifty-two actually,” says Ozone’s Russell Ogden when double-checking this).

“We wanted to keep the same ease of use and solidity of the Delta 2 and did not want to increase aspect ratio just for the sake of performance,” test pilot Russ told us. “The challenge for us was to make a wing that was as solid as the Delta 2 at speed but could also be tested without the use of collapse lines. We were totally unwilling to compromise the wing in this department.”
So much so, Ozone’s boss Mike Cavanagh was openly discussing releasing a Delta 3 in the ‘D’ class last year, where folding lines are still allowed. But that didn’t come to pass. 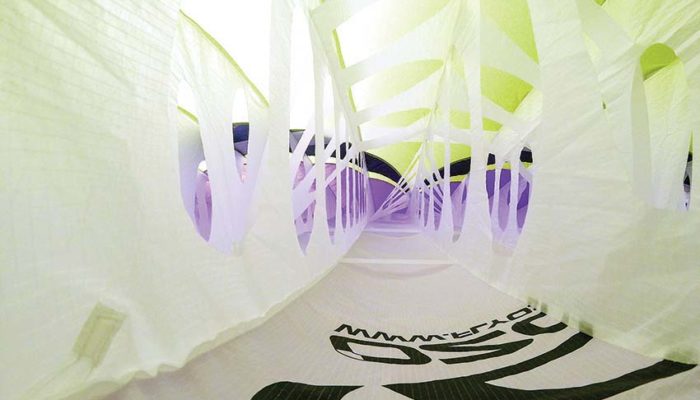 Differences with the Delta 2
The plan and arc look similar, but there are four more cells, double transversal shaping (3D shaping) for a cleaner top surface for starters. A totally different internal structure tightens up the sail and improves structural integrity throughout the speed range, and optimised line rigging has meant 4% reduction in line drag (despite more cells). Lastly, a cleaner trailing edge and new wing-tip shape gives a cleaner airflow. I’d be lying if I’d claimed to have worked all that out myself though; designer Dav Dagault told me all that.

One thing I loved about the Delta 2 was how well it sniffed out good air. It felt like you were riding the air off the leading edge, and you’d feel lots of little surges and nudges on one side or the other that would lead you into the core. The same experience is even more pronounced with the M6 and R series of open-class wings. In contrast, the Delta 3 feels much more pitch stable, and as a result you’re served a little less information from each side of the wing. The wing tends to search slightly forward when entering lift and then remains relatively neutral in the climb, keeping its nose up in the turns.

However, the same goes for the Zeno: it took me a good 30 hours to get used to the different way the wing communicates lift. It’s different: not better, not worse. When I put it to Russ that the ‘new’ Ozones differ, he agreed, and explained that the improved pitch stability is due to the new profiles, how far forwards or backwards the pilot hangs under the wing and overall line lengths. 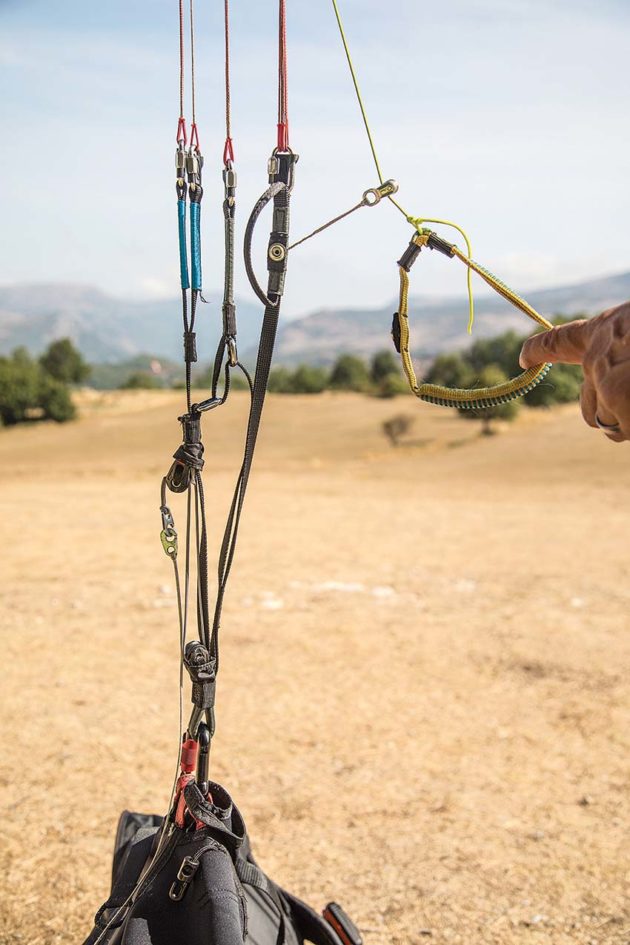 Comparisons with the Sigma 10
We did some back-to-back comparisons on a fairly windy, thermic day. We measured trim speed for the Delta 3 ML at 36km/h. The Sigma 10 (in size 25) clocked in at 38km/h. The Sigma 10 has lighter, slightly shorter brake travel, giving a more precise feel and a higher degree of piloting pleasure. I flew both at the same relative wing loading: 4kg below the top of the weight range; the Delta 3 ML at 101kg; and the Sigma 10 25 at 96kg.

In comparison, the Delta 3 feels a little more machine-like – it’s less of a carver. Having said that, the MS size of the Delta 3, flown at 93 kg, is somewhere between the Sigma 10 and Delta 3 ML in this regard.

However, I felt the Delta 3’s excellent pitch qualities mean it is easier to fly in choppy air on the brakes, with less outer brake management – there are fewer dives to catch than the Sigma 10.

On bar, the D3 feels like it has a bit more grunt, more able to push on through turbulence while maintaining speed. There’s very little pitch movement as you cut through the chop. Coming onto this from an EN-B is like switching from a flat-bottomed inflatable speedboat that bounces up and down the waves to a heavier powerboat with a proper bow that just carves and planes through it all.

I measured top speed for both the Delta 3 ML and Sigma 10 25 at 50 to 51 km/h, which represents a gain on both the Delta 2 and Sigma 9 of 2-3 km/h. With the latest EN-B series wings flying at 48km/h, it should give C-class pilots a tiny grin to know their wings definitely now have a top-speed advantage, as this hasn’t always been apparent in the last two years of testing with our Flymaster TAS pitot probe.

Anyhow, these are very different wings. The Sigma 10 feels more sporty and ‘connected’ when thermalling, while the Delta 3 may be a tad more reassuring in rough climbs. On balance, when flying at speed through turbulent air, I think I prefer the Delta 3’s ever so slightly more rigid structure.

Loading
My hunch is to fly the Delta 3 loaded within 5kg of the top of the weight range. This is just a gut feel, but it’s based on how the handling and spanwise cohesion both tighten up a little as you load it up, and there is no tendency for the ML or MS wings to ‘wind in’ and lose efficiency even when at 105kg and 95kg respectively. 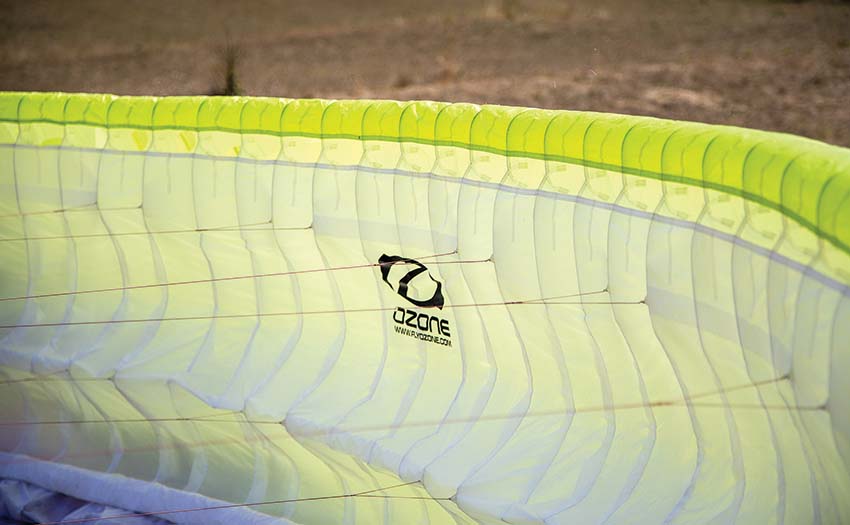 Set back A-lines and the sharknose. Photo: Marcus King

Collapses and big ears
The Delta 2 has relatively light pressure at the tips, and tiny 3-4 cell collapses were not uncommon in rowdy air. The Delta 3 also has quite lightly-loaded tips, but doesn’t seem to suffer tip tucks. However, when pulling big ears, they’ll stick in and need a bit of a pump to clear (not dissimilar in behaviour to the M6). There’s a tiny bit of stickiness in the outer brake-fan as well as the leading edge sticking in among the main lines. Recovery from side collapses is very similar to the Delta 2. The Delta 3’s centre section is really, really loaded – it’s rock solid and ready to ride fast on bar – so I’d imagine a full frontal would require a serious lack of pilot awareness and engagement. I induced some big full frontals with the centre of the canopy collapsing more aggressively than the tips, and recovery could be aided with a quick stab on the brakes, as is taught on most SIV courses for wings of this aspect ratio and higher.

Conclusion
The Delta 3 is a big-air adventurer, designed to give you peace of mind whatever’s coming next. It really shines on half- to full-bar – where as one pilot commented, “it’s an absolute beast.” As flying faster on bar is something that should be on the tick-box of all sports class pilots, I’m sure the Delta 3 will prove its worth over a similar lifespan to its predecessor, particularly when gliding hard through more turbulent air. I think this point is particularly important to make, because gliding fast isn’t something many of us have time to do on test flights when looking to buy a new wing.

In calm air you’ll notice slightly more precise handling than the Delta 2, and in thermals it may take a little time to get used to the more pitch-stable, smoother nature of the Delta 3. Personally, I really enjoyed the ‘riding-off-the-leading-edge’ experience of the Delta 2, M6 and R12, but both the Delta 3 and Zeno have a different feel to them that takes a little adjusting to. Don’t discount the wing from one test flight if you find the same: honestly, it’s just a different kind of ride. You might also want to experiment with different harnesses, too. I found the Delta 3 more enjoyable with a Forza than my X-Rated 7. I just got more feedback, more enjoyment. Heavy competition harnesses dull out some of the noise of higher aspect wings, but I find they can also filter out too much of the useful movement on medium aspect wings.

So, to conclude, if you were to test the Delta 3 ML back-to-back against other sports class wings, you might find others are slightly more immediately playful. The Delta 3 is more of a rock-steady, reassuring character who’ll see you home and look after you even when you’re a bit tired at the end of a long day’s adventuring in the mountains.

Take a Delta 3 barrelling along an alpine ridge or a flatland cloud street on a sporty day and you’ll likely find yourself keeping up with several D-class wings, because it is just so solid and stable on bar. It’s got serious momentum.