The flying scene is buzzing in New Zealand right now. We asked Ben Kellett to tell us what the summer season has been like so far. Ben lives in Queenstown, and is a full-blown vol-biv addict – working as a chef to give him as much flying time as he can possibly get…

What was it like when the pandemic began, in March 2020?

With the arrival of Covid in the country and the pandemic growing around the world Aunt Cindy (PM Jacinda Ardern) quickly threw us into lockdown and clipped our wings for six weeks. Initially it was hard for a lot of pilots who struggled to understand how such a solitary sport could present an issue, especially as we were tortured in the first few weeks of lockdown with incredible weather. For me this was certainly the longest I had ever gone without flying since learning. March, April May were concerning times for a lot of us living and working in Queenstown as it relies so heavily on international tourism and the borders were closed to everyone except returning New Zealanders who must stay in a managed isolation facility for two weeks. Many found themselves laid off or with significantly reduced work hours. We’ve all had to change and adapt how we operate to meet the new pace of life. 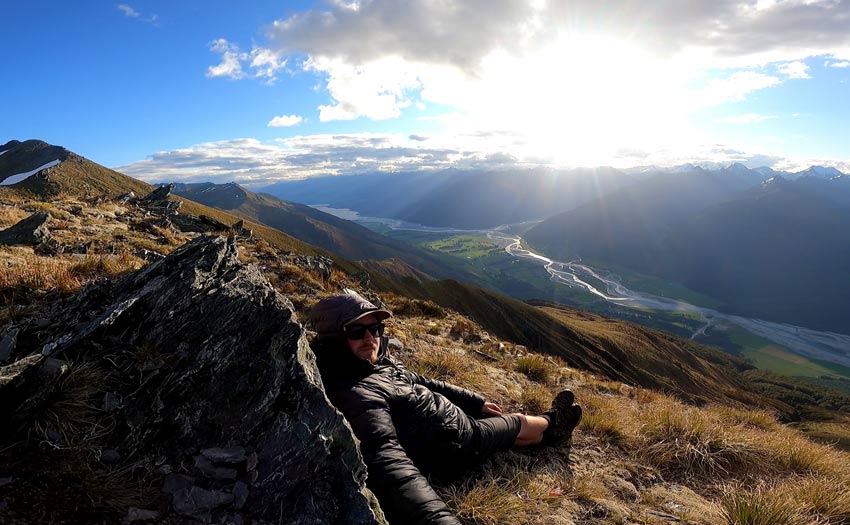 Enjoying the sunset above Makarora at my campsite halfway along a vol-biv that took me and Nico from Coronet Peak in Queenstown to the biggest Mountain in New Zealand, Mt Cook.

After the initial lockdown as a country, we had managed to essentially eliminate the virus. Apart from another short stint of restrictions in August that mostly affected Aucklanders, we have been completely restriction free. This meant that the winter season where most business make a good chuck of their annual turnover, didn’t do as badly as expected because Kiwis who now couldn’t travel overseas were still able to move around the country and visit ski resorts. With the extra spare time we’ve found ourselves flying more than ever, lots of hike-and-flies and acro on the stable winter days. 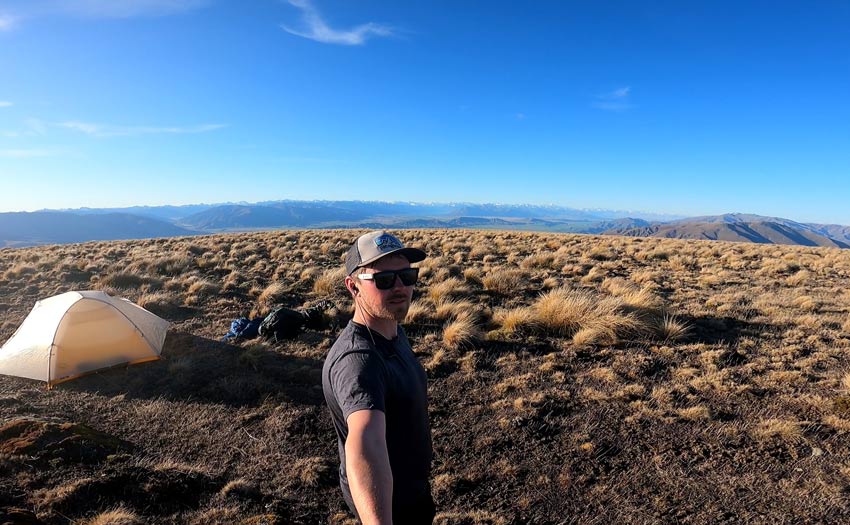 Camping above the Mackenzie Basin on the second night of a vol-biv trip in October that started at Coronet Peak in Queenstown and ended up near St Bathans.

The last few years have been fairly miserable in the early flying season. Last year we saw flooding in December that caused Queenstown and Wanaka to temporarily shut down. We have been completely blessed by the weather gods this spring and the timing was perfect, many of the commercial tandem pilots dusting off XC gear and spending time refinding their passion in solo free flight. Taking advantage of less work and living without any restrictions, apart from being unable to travel overseas, has found us flying out the back on every good day. 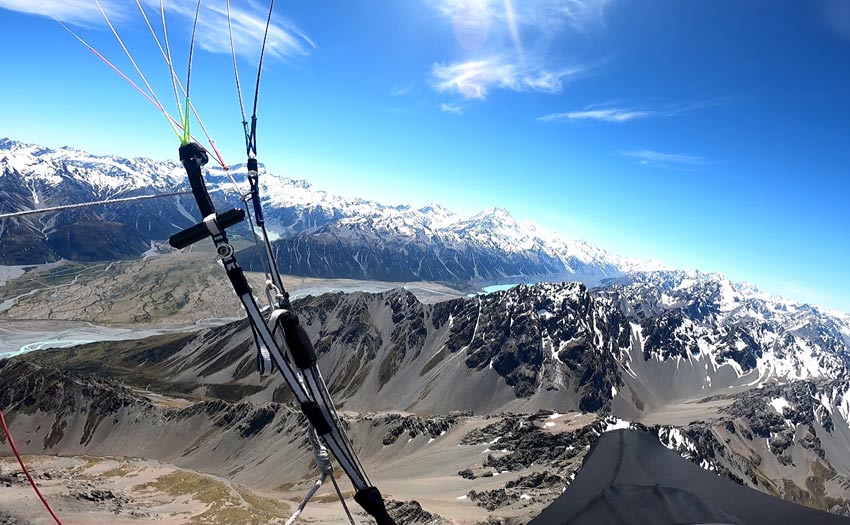 Getting the climb after the long glide across the Tasman. Looking back at Mt Cook.

Since the end of winter we have had no restrictions or requirements other than if you want to go overseas, on your return you must go to a managed isolation facility for two weeks at your expense, roughly NZ$3,500. With the strong La Niña this year providing far better flying conditions, coupled with what’s going on overseas, we’ve found ourselves trapped inside paradise. 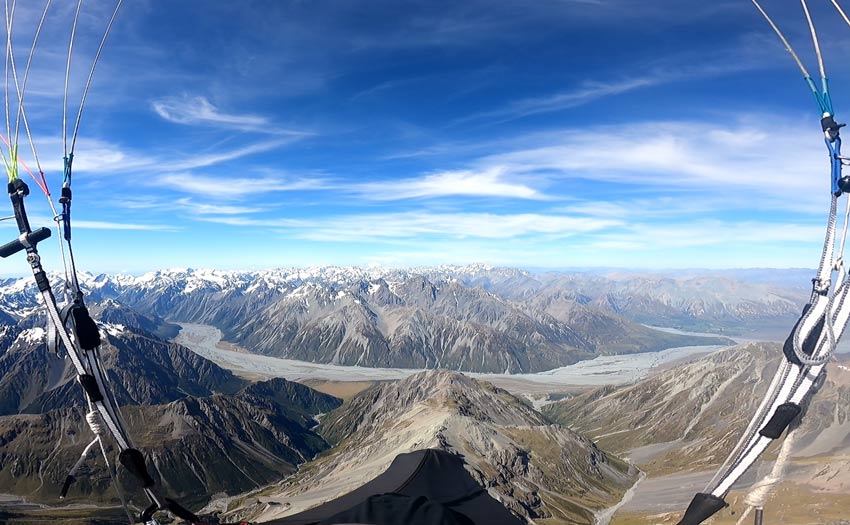 Crossing the Two Thumbs Range, looking into the Havelock River. 130km flown and was still unsure what equipment I had lost out the back of my harness. I ended up landing near Erewon Station and camped by the river. The next morning I walked to Mt Potts Station and got a ride to town with the station managers wife who was doing the school run.

What’s going on in the flying scene this summer?

The flying community is in really good health as everyone has more spare time, more people are putting that into the community and their own personal flying. We’ve even started towing with Paratownz on the lakes, giving us the opportunity to train acro and even SIV with instruction from our most experienced pilots who would usually be tied up flying tandems. We have also had more time to organise events including our first acro competition in 10 years, Acrofest. that I am organising in conjunction with Paratownz and our first hike-and-fly race that Kinga Masztalerz is organising in Wanaka, not to mention the Nationals that’s being held in Nelson with 157 registered pilots. 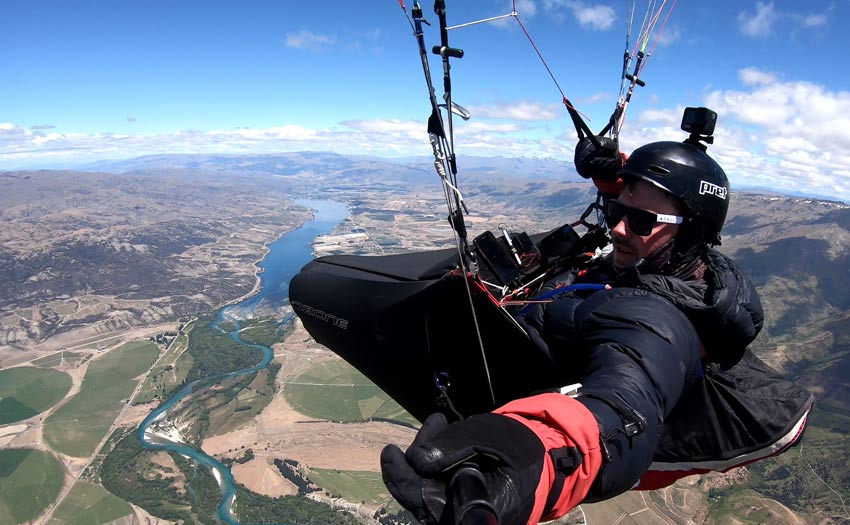 Views of Lake Dunstan. Too windy for the big stuff so I flew as far east as possible in the stronger westerly winds and ended up over the flats in Central Otago.

What’s it like looking in the media with most of Europe and the USA still being under severe restrictions?

New Zealand had the perfect recipe to avoid devastation from the pandemic. It’s a Pacific island 1,500km from any other significant population, a compliant nation with a decisive and compassionate leader.  It’s hard looking at what’s going on overseas with all of my family living in the UK in some kind of lockdown for most of the year. I almost feel bad for being able to go flying every day, hitch-hike home and tell the story in the pub. However, it’s hard not to forget about what’s going on when you’re screaming up the Southern Alps at 10,000ft laughing hysterically that you just avoided two days’ walking with that last thermal. 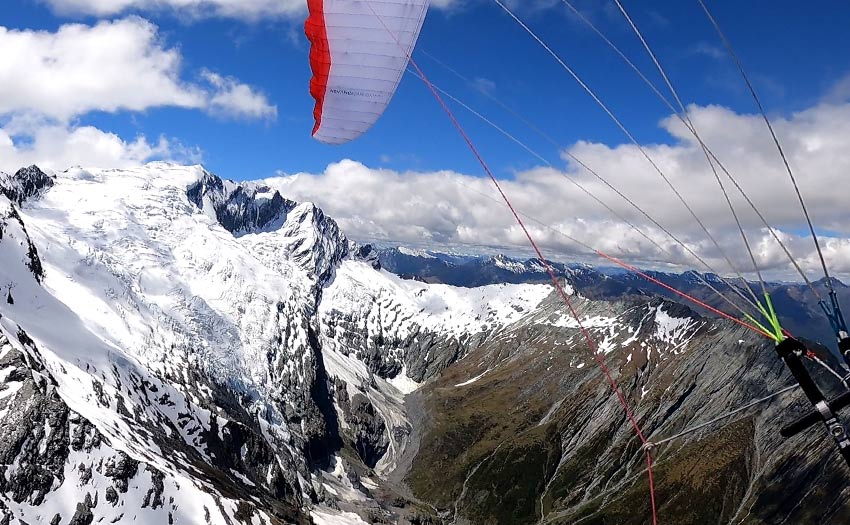 Spectacular views of the Rob Roy Glacier. This was on a triangle that took me into the heart of the Mt Aspiring National Park. Hitting the last turnpoint made me two hours late for work. “Luckily” things are much quieter so it didn’t matter much!

And what kind of vol biv routes have you been doing?

At the beginning of the season I got my hands on an Advance Omega Xalps 3 lightweight two-liner, the perfect glider for eating up kilometres in the NZ mountains. For me New Zealand has the optimum level of exposure. To fly the most epic lines you need to commit to a night out in the hills and be prepared to walk for a couple of days if it doesn’t all go to plan. This makes it all the more exciting soaking in the views, carving lines without another human in sight.

With the more complex weather that a mountain chain that has risen out of the ocean presents, shorter two-to-three day missions are generally the way to go, which naturally suits work commitments. I really enjoy trying to make the most out of the day, looking at the forecast and picking the best area to head to whilst also trying to fly new areas and pick lines that haven’t been flown before. Generally, if it’s an epic day I’ll try getting close to the divide for the best views and camping high for an easy second day; when I have work, seeing how far out the back I can get and still make it in on time; then when it’s too windy in the big stuff, pushing further east flying the flatter areas can also be super fun and rewarding. I love the reactions from the drivers whilst hitch-hiking “What?! All the way from there?! How?! Where’s the engine?” Summer has only just begun and there’s a growing list of lines and areas that need exploring on the right days. In some weird way the pandemic has meant we all have more time than ever to fly them.