Why you shouldn’t fly a paraglider in the rain

‘Don’t fly in the rain’ is something we learn from day one. And with big leaps in design in paragliders and paramotor wings, that advice is more relevant than ever. Ed Ewing finds out why things really can get slippery when wet

We all know that we shouldn’t fly in the rain, but lots of us have probably done it, and got away with it. But with advances in materials and design, flying with a wet wing is not what it once was.

“Years ago if we got caught in the rain it just meant wet kit,” says Kelly Farina, paragliding guide and author of Mastering Paragliding. “We used to think that the main danger was the trailing edge filling with water, inducing an unrecoverable full stall.”

But fast forward to 2013, as Kelly watched from launch as a brand new glider flew into light drizzle. “The ‘out of the bag’ intermediate glider rocked back and entered a deep stall all the way to the ground. Luckily the pilot was shaken but unhurt.”

Kelly’s take on why this happened? “I think the newness of the cloth didn’t allow any absorption of even this light rain. The droplets disrupted the airflow over the wing, reducing the lift, with quite dramatic consequences.”

Adventure pilot Gavin McClurg has also seen the consequences of flying in the rain. “It was a big overdevelopment day in Bir, India. We landed before the rain started but lots of people kept flying. The worst accident was a Russian pilot who came in when it was raining hard. As soon as she came off her speedbar, about 15m from the ground, her wing went parachutal and she went in hard. She broke her shoulder.”

Ozone test pilot and SIV instructor Russell Ogden has heard similar reports. “The problem is that modern wings seem to enter parachutal stall quite easily when they get wet. In the olden days it wasn’t so much the case,” he says.

“We don’t know the exact reasons,” meaning ‘we’ the sport and industry, “but we suspect because in the old days the nose was so heavily creased that a bit of rain didn’t really cause any problem.

“Nowadays when you have such a clean leading edge, which is almost wrinkle free, the water beads up and causes separation, which can cause wings to enter parachutal stall quite easily.” 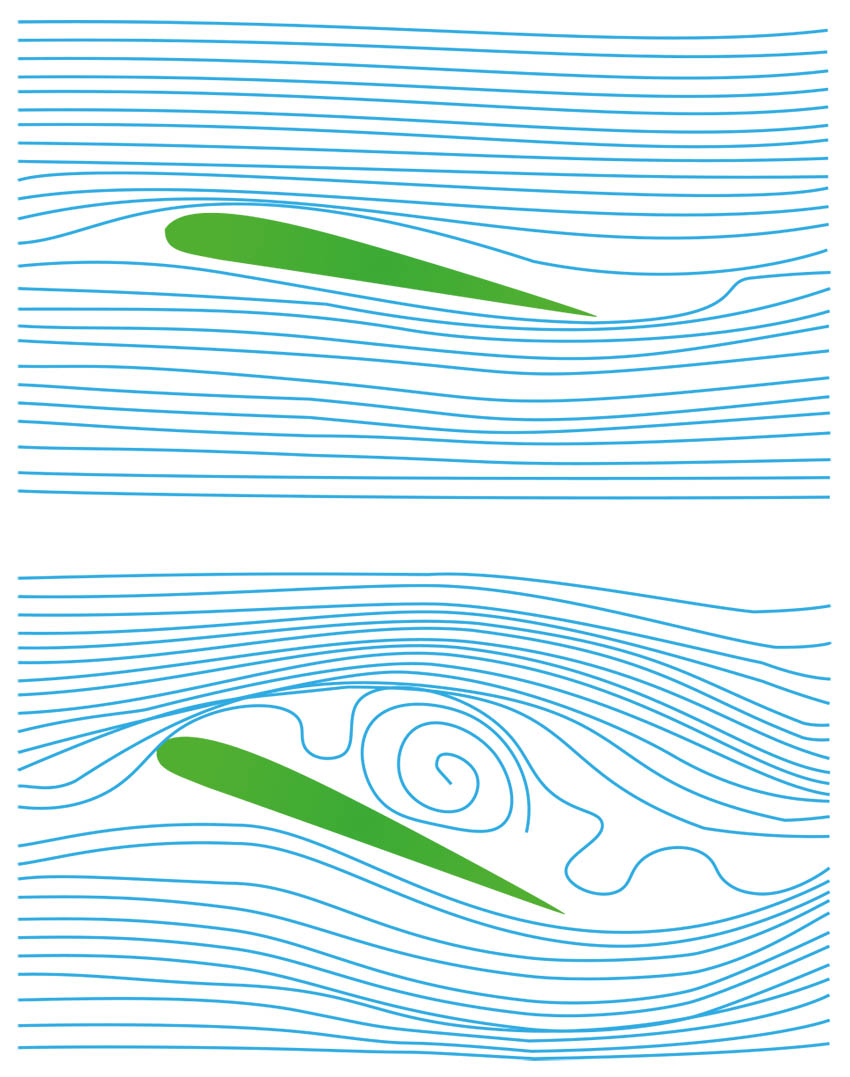 ‘Flow separation’ is a fluid dynamics term, and it refers to a specific situation where the flow of air (or water) over an object becomes detached from it, and instead takes the form of eddies and vortices.

It doesn’t only affect wings. A lot of research has gone into exploring how to delay flow separation in golf balls, say, or tennis balls. (Dimple technology and the right type of fur, are the answer.)

And sailplanes use ‘turbulators’, thin zig-zag strips placed on the lower side of the wing, to help ease the transition from smooth to turbulent flow.

In paragliding, we don’t have turbulators and we don’t have dimpled wings. In fact, the goal is to make everything as smooth as possible, to reduce drag. That is fine in dry air – modern wings with a fast, streamlined profile get ever more efficient and help us to fly further – but it’s not good when a wing gets wet.

The issue affects all classes of paragliders. “It can be across the board for all types of wing,” says Russell. “Certainly the cleaner the nose, the fewer wrinkles there are, the more chance there is for it to happen.”

Is it to do with the water repellent coating that cloth-manufacturers are using, as Kelly suggested? “It’s possible,” says Russell, “But we don’t know the exact reasons.”

What Russell does know, is that he and his colleagues at Ozone have heard more reports of wet wings going parachutal, “and we’ve experienced it ourselves.”

In a parachutal stall the glider stays fully formed, slows down to almost zero forward air speed, and starts to drop vertically. The pilot is now falling like a parachutist, with a descent rate of about 6m/s. The pilot will notice the drop in air speed by a decrease in noise, less wind on their exposed skin, and a general feeling of weird stillness.

“Looking up, you might see slight deformation on the lower surface,” explains Russell. “The glider will have lost some of its chord-wise compression and it will be a little bit thinner in chord. You will see indents.”

Applying heavy brake inputs at this point can lead to a spin, or an unexpected full stall.

As well as flying when the glider is wet, parachutal stalls can arise from a slow release from a B-line stall (one of the reasons B-lining has fallen out of favour in recent years) or after taking a full-frontal deflation.

What to do if your wing goes parachutal

“If your wing goes parachutal the best thing to do is put your hands up all the way. If that doesn’t work, then apply speedbar until the glider bites and flies. Once it’s done that, keep the bar on until you find a safe landing,” says Russell.

What about the old advice of pushing on the A-risers? The idea after all is to bring the nose down, to reduce the angle of attack.

“You can, but personally I prefer to use the speedbar because it’s symmetrical. Pushing the risers does work I’m sure, but it’s pretty old school in my book. It’s not something I would do, I would use the speedbar.”

This sounds simple but in practice it takes full mental control not to overreact or do the wrong thing, in what is probably an already stressful situation.

“You’ve got a wet glider, which makes it heavier. A heavier glider will be more aggressive in the recovery and more likely to enter a stall with less brake than normal. You put on two inches of brake, and then you’re in parachutal, so it takes you by surprise. It’s very difficult to fully release the brakes when you are in those situations.”

This is where things can start to get out of control, if the pilot isn’t reacting properly. “The glider goes forward a little bit and you naturally try and brake it, and it drops back in again. You can repeat that cycle over and over again, feeling like the glider has gone out of control.

Russell adds: “I’ve never known a situation where that has not worked.”

Many people in these types of situations, he says, “Put their hands up, 1,2… nothing’s happening – and then they do something else.” That something else usually involves brake inputs. “Then it can drop into a stall. Normally the recovery from the stall is OK, but if you are a little bit lost in the stall then you are not in a great situation.”

Getting away with it

Once your wet glider is stable, the best advice is to land safely. Don’t apply big ears or otherwise collapse parts of the wing, as this adds drag and increases the risk of going parachutal, advises Russell.

Instead, “Apply half-bar and fly at speed all the way down to the ground.” He means until you are just about ready to flare. “The danger is keeping the bar on all the way to what would normally be a safe height to release the bar, releasing the bar, and then the glider going parachutal. Then you don’t have height or time to sort it out.” This is what happened to the pilot Gavin McClurg saw in Bir.

If you need to lose height quickly, then fly tight 360s. Again, don’t apply big ears or B-line. “Spiralling down is good, so long as you control the exit cleanly. The idea is to keep the speed up and avoid high angle situations. So if you do a steep spiral and you come out of it abruptly, then that can also be detrimental. Doing more gentle spirals so you can control the exit, and maybe apply the bar to stop the glider climbing, is good practice. Then keep half-bar on all the way down to the ground until you flare.”

High enough not to care
If you are high enough not to care, and end up with a wet wing because you flew in cloud or got caught by a shower, then the best way to dry your wing is by flying it fast: hands-up, on bar. “You can bang the risers as well. This can help any water on the top surface flow off the back. It’s not something we have any data on, but it kind of makes sense. And just keep the speed and get in the sun. After a few minutes of flying you’ll be OK.”

Early morning flying
The general advice then is to avoid getting the glider wet. This also means pilots should avoid early morning dew. “I think for paramotors there is an issue with early morning flights and dew,” says Russell. “For those pilots, if you suspect the glider is damp, then you need to keep the trimmers released, keep the speed going, avoid super-hard climbing too early too low. Use a gentle climb rate, maintain the status quo, keep your speed up, and climb to a safe height before doing anything too radical.”

Don’t fly with a wet wing

The two takeaways from this article then are:

1. Don’t fly in the rain or with a wet wing
2. Be aware of the parachutal stall

“As soon as you are in the rain, as soon as your glider is wet, you should be acutely aware of parachutal,” says Russell.

Finally, how wet is wet? Is damp dew the same as water running down the risers?

“That’s a very good question,” says Russell. “But right now I don’t know. We don’t know. So the best advice really is not to fly when the glider is wet.”