We all know what Venturi winds are, but there are other types of ‘accelerated flow’ wind. Honza Rejmanek explains.

We often share tips with other soaring pilots who are curious about a particular cross country route. After pointing out where we have encountered great lift we might include words of caution such as: “Be careful crossing the gap in the ridge. It can Venturi through there pretty bad.” Or, “Try not to land in the tight section of the valley. The Venturi really makes it blow hard through there.”

Practically every soaring pilot can recite a definition of what a Venturi is. We learn fairly early on to be vigilant of areas where the terrain constricts and causes the wind to funnel through the narrow section.

We anticipate accelerated flow in such narrows with the strongest wind in the narrowest section. As soon as the constriction widens we expect the wind speed to decelerate because it is no longer being forced through the narrow section.

The justification for what is going on in a Venturi is often given based on a “conservation of matter” argument: For the same amount of air to flow through a narrow section it has to speed up. This mental model is valid as long as we are looking at terrain on a fairly small scale. This would be a scale of several hundred metres to several kilometres. 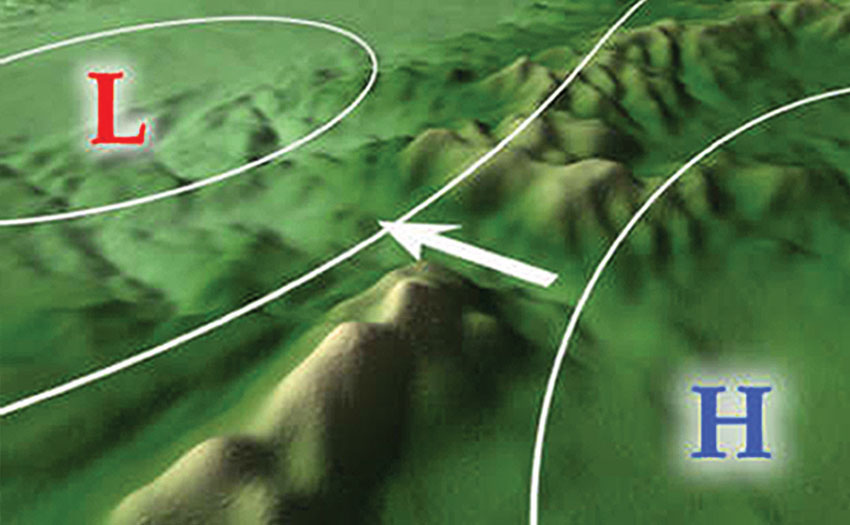 A meso-scale gap in a mountain range. In such a gap flow can be highly ageostrophic, meaning it can flow across isobars from high to low.

However, at scales of several kilometres to several tens of kilometres we often observe wind patterns that are not easily explainable by the Venturi effect. In fact, large gaps and straits tend to exhibit the strongest winds at the exit region and not necessarily in the narrowest region. In order to explain wind patterns that appear to contradict our Venturi effect explanation, we need to first set the stage.

In order to have wind blow through a large gap in a topographic barrier it is necessary to have a difference in pressure across the barrier.

As well as there being a pressure difference across the barrier, it is not uncommon for the air mass on one side of the barrier to be colder than the air mass on the other side. This cold air mass is often fairly shallow, in the order of 500-2,000m, and is topped by an inversion.

The topographic barrier or mountain range that separates the two air masses is often taller than the depth of the cold layer, so even though there is a synoptic pressure gradient that would encourage the movement of the cold air across the barrier, the cold air gets blocked.

The colder layer, being denser, increases the surface pressure on the cold-air side. This is a meso-scale phenomenon.

In this scenario the cross-barrier surface pressure gradient is strengthened by the cumulative effect of synoptic and meso-scale phenomena. It is important to keep in mind that there are cases when phenomena at different scales can act to oppose each other as well, but they are working in concert in this scenario. 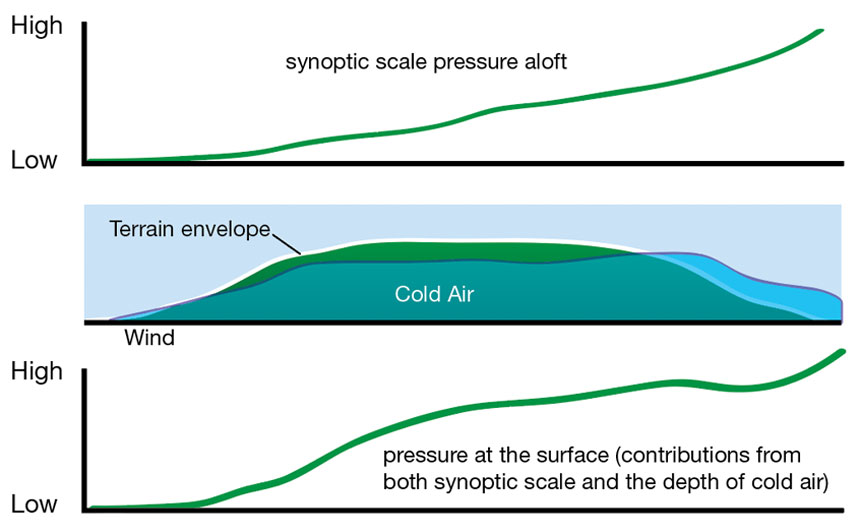 The cumulative effect on the surface pressure resulting from both synoptic and meso-scale phenomena. Large changes in surface pressure over a short distance result in the greatest acceleration of wind speed. Image: The Comet Program

If a gap exists in the mountain range then the cooler air is no longer blocked at this location and is free to accelerate through the gap. This is a meso-scale gap that is several kilometres wide and tens of kilometres long.

The opposite occurs at the exit region. The cool air rushing through the gap is now free to spread out and its thickness quickly decreases as might be expected. This is called a hydraulic effect. It is easy to imagine this cool air mass behaving like water and rushing to spread out at the gap exit.

What is slightly less intuitive is that this thinning of the cool air mass at the exit region locally drops the surface pressure. This is because there is now far less cold dense air above this exit region than there was in the gap.

This relatively sudden drop in pressure over a short distance results in a locally strong pressure gradient and the wind that has been accelerating as it passed through the gap gets an extra boost of acceleration at the exit region. This is most pronounced at the lowest levels. The strongest winds at such exit regions are usually found at approximately 100m above the surface and then the wind speed decreases with altitude. 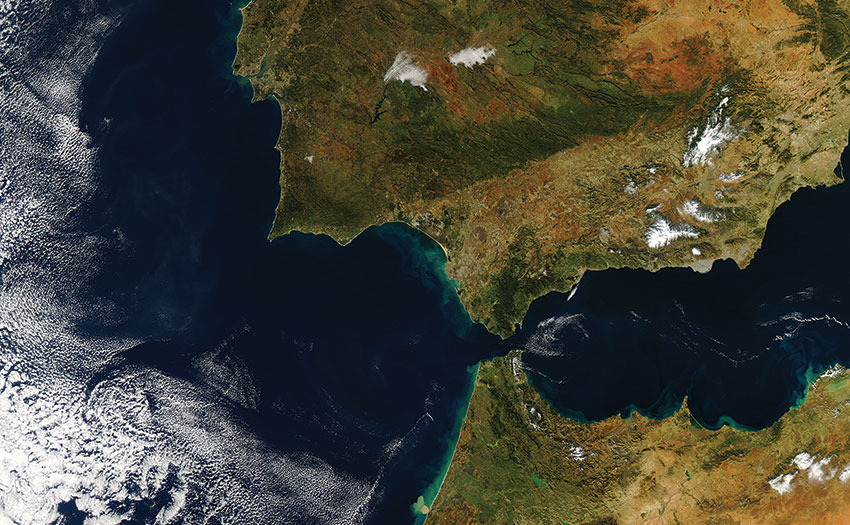 On a fairly benign day with no significant weather over Spain the winds were blowing at 30 knots at the exit region of the Strait of Gibraltar.

It is important to keep this mental model in mind, especially when planning something as simple as a big sled-ride off a high mountain in the winter. Light to moderate winds on launch do not guarantee light winds in the landing zone if this landing zone is located near a gap exit region.

In the summer a cross country flight on a coastal mountain range can result in a strong wind landing in a region where there is a gap exit and a cool sea breeze is rushing in and accelerating.

For further insight into gap winds and numerous other meteorological phenomena take a look at Meted Comet. This is a site that, upon free registration, offers insightful tutorials on a wide range of topics that soaring pilots will find interesting. The images in this article are used with the permission of the COMET program.