Throw your reserve and suddenly it’s the most important bit of kit you own. Photo: Finsterwalder-Charly
Skills and learning

How to choose a reserve parachute for paragliding

Throw your reserve and suddenly it’s the most important bit of kit you own. Matt Warren asked some experts for their tips on how to choose a reserve

How do you choose a reserve that works for you?

Tom de Dorlodot is well known as a professional adventure pilot and Red Bull X-Alps athlete. He’s flown everywhere from the beaches of France to the Karakoram in Pakistan. “Which reserve you fly with should depend on what you’re doing,” he says. “Where possible, I try to be as light as possible and take the lightest possible round parachute – around a kilo. When I’m doing hike-and-fly or bivvy flying, I usually know the area and I’m flying over landable terrain, so a round is fine. This will also be the case for most pilots in the Red Bull X-Alps when weight is a major consideration.”

In recent years square parachutes, not round, have come into vogue. Randi Eriksen has seen the development of these up close, as a member of the Air Turquoise test house; where equipment goes to get its EN certification. “Certainly everyone is now speaking about square reserves,” she says. “The sink rate and opening time is roughly the same as a round canopy, but they are super stable, which is a big advantage.”

Chris White is an instructor, guide and SIV expert. He works with SIV guru Jocky Sanderson and has helped hundreds of pilots successfully get through their SIV courses. “I suspect square reserves are more stable because they develop drive,” he says.

“They actually track across the ground – although not necessarily forwards. It could be backwards or sideways. Nevertheless, they are less likely to oscillate and aren’t much more complicated to repack.”

Reserves fall into a few categories: 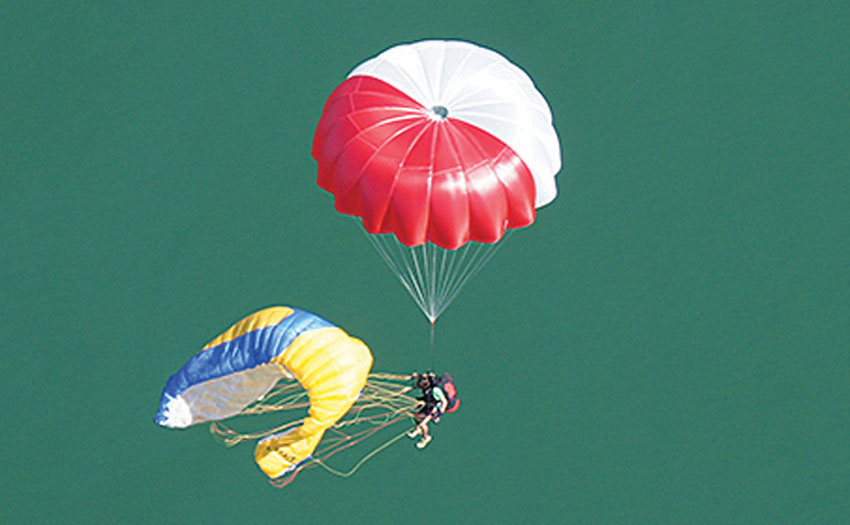 Round Pulled-Down Apex (PDA) parachutes are the type most pilots will recognise. They descend vertically – although they will drift with the wind. They are the simplest, and cheapest, systems. 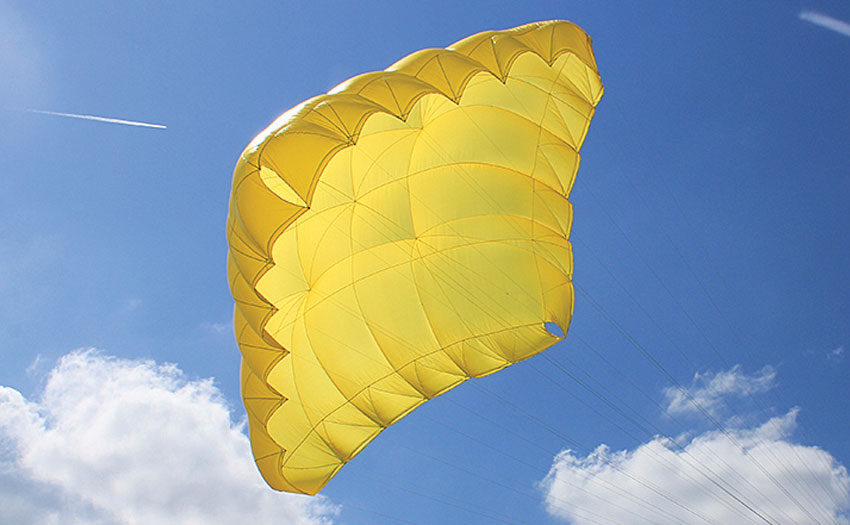 Square reserves (also called cruciform) deploy and descend like a round – although they do tend to track. They offer greater stability for a slightly higher price tag. 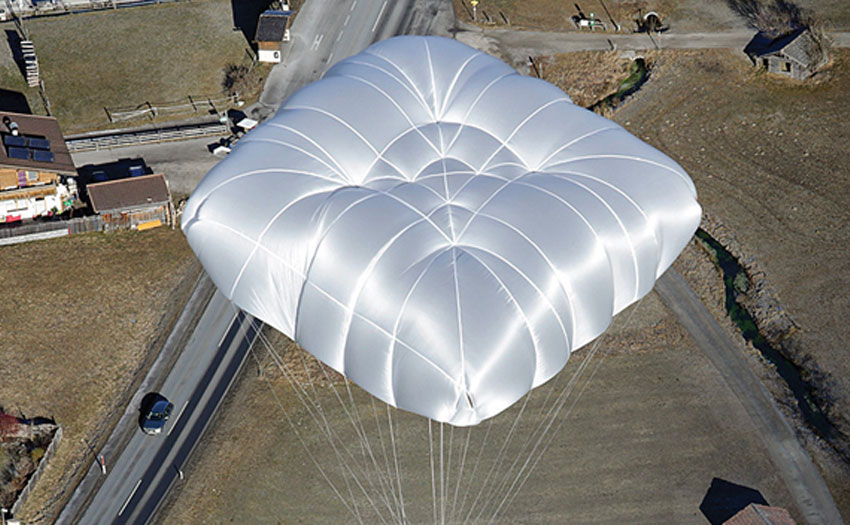 Hybrid square/round reserves marry elements of both round and square reserves. Some are steerable. 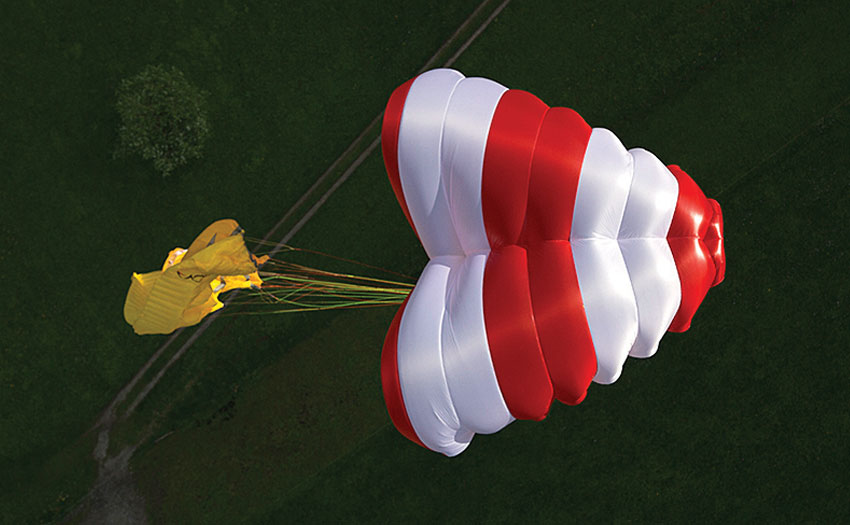 Rogallo-style reserves are steerable. They are more complicated to pack and require a greater level of skill but, within reason, you can spot-land. They are pricier still.

Base systems can cut away the glider, leaving you with a fully-functioning, steerable ram-air parachute. On the downside, they are bulky, expensive and best left to those who really know how to use them – pro acro pilots or those with skydiving experience.

Should you get a steerable reserve?

Steerable reserves give you some autonomy over where you land, but you must know how to use them – and be prepared for a few surprises.

Tom: “If I’m flying in more remote, more technical areas, like Pakistan, then I fly with a steerable Beamer 3 Rogallo-type parachute. It’s 500g more, but you can steer it and that’s very important in areas like that. You can land them anywhere. I opened one in Organya and managed to land it on the take-off.

“But it’s worth remembering that these steerable parachutes quite often open with a twist. It’s not too big a problem. If it opens twisted, it will start off going down straight, so you just have to get the twist out and find the handles and you can fly it.

“There are also the Base system parachutes, and they are by far the best. But at the moment, they’re too heavy. That will change, though.”

Randi agrees that steerables are more complicated for the pilot. “They do quite often open twisted. The Rogallo system, for example, mostly opens into wind and so you may have to react quickly to correct its direction. This is fine for more experienced pilots, but less so for beginners, especially when you have to deal with the paraglider as well.”

Chris: “The main thing is that to use a steerable successfully, it makes sense to have some form of cutaway system. But that adds more potential problems. They’re more suitable perhaps if you’re likely to deploy your reserve at a higher altitude. But in my experience, people don’t.

“If you’re high, then people seem to use that height to try and recover their main. This means that most deployments happen relatively low. And if you’re using a steerable it can take some time to gather in the glider and get to the control handles to make the steerable actually steerable.

“There are advantages and disadvantages to all of the systems and in the right situation any one of them could have an advantage over another. Unless you have an idea what sort of incident you’re going to have, it’s very difficult to know which will be best.”

What does he use himself? “I changed my parachute last year and did quite a lot of research. In the end, I bought a very simple, straightforward, foolproof, lightweight, pulled-down apex. That was the best compromise.”

Mounting it – and being prepared to use it

You also need to choose whether you want your reserve out of the way in your harness, or in your lap, using a front-mounted system.

Tom: “When people start paragliding, I often advise them to fly with a front-mounted reserve. It’s easy to find as the handle is right in front of you. You can also deploy it with either hand.

“When I was 16 or 17, I was practising full stalls and I didn’t really know what I was doing. Anyway, it went very wrong and I had five twists and I was going down really fast. Trouble was, I never thought about the rescue. I was just trying to recover.

“But then, just at the very last moment, I saw the reserve handle there, right under my nose and I threw it. Having that front-mounted reserve probably saved me from a very bad accident.

Chris: “I think it’s also a good policy to get a matching system, so that if you have a Gin harness, you also get a Gin reserve. Otherwise, it’s a bit like putting a Volkswagen engine in your Ford.

Tom: “Whatever type of parachute you fly with, test it. Go on an SIV course and ask to deploy it. Many people consider their reserve to be the Plan B, but they don’t know what it does and how it behaves.”

Chris: “Should you throw it on an SIV? I firmly believe that if you’ve already thrown it in a controlled environment, you’re more likely to throw it when you need it.” So that’s a yes.

Finally, consider the colour – if you want to be found after landing in a tree, ensure that you don’t have a green one. Yes, some manufacturers still use green fabric. 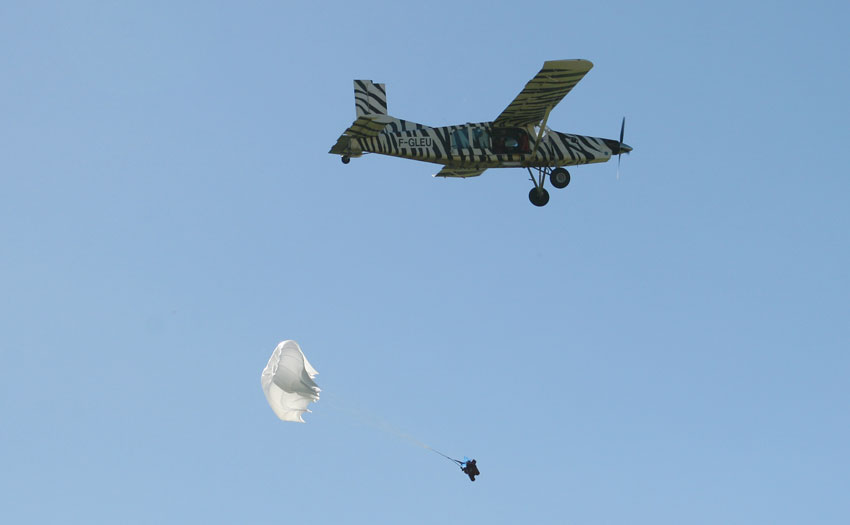 Reserve development can include testing from a plane with a dead-weight. Photo: Sky Paragliders

HOW RESERVES ARE TESTED

Any reserve parachute you buy should be EN certified. But how does a rescue make the grade? Randi Eriksen from test-house Air Turquoise explains.

“There are two kinds of test for the EN (European Norm) standard. We test in-flight and we perform a structural, strength test. In the flight test, we measure three things: opening time, the reserve’s stability and its descent rate.

“We do this by flying over the lake and deploying the parachute. Obviously this involves going in the lake a lot. Last year, we collectively ended up in the lake 80 times. We test them without a paraglider, so as soon as the reserve is deployed, we release the paraglider.

“The first thing we check is the reserve’s opening time. To do this, we attach a piece of whittling, which is set to snap at 20 decanewtons. We monitor the deployment with a camcorder and when the whittling breaks, we know the reserve is fully deployed.

“Releasing the paraglider also starts a pendulum effect. If the parachute is suitably stable, this effect should reduce over time. If the pilot feels like it doesn’t, it fails.

“To get EN certification, the opening time should be under five seconds, the oscillations should reduce, and the descent rate should be under 5.5 m/s – steerables must come down no faster than 4m/s, largely because they also have forward speed. But these standards will soon change, meaning that to pass, reserves will have to open within four seconds.

“It’s worth remembering that 5.5m/s is still quite fast. Reserves are meant to save your life, not necessarily to prevent you from breaking an ankle. If the parachute is oscillating, you will also have a faster descent rate. We get the odd minor injury even landing in the lake.

“When a reserve is EN certified, it should be marked – usually on the risers. Be aware, though, that reserves can also be certified according to the [different] LTF standard, which allows for far faster descent rates – up to 6.8 m/s. They don’t test for stability either. Almost all reserve manufacturers will now go for the EN standard, but if you get an older, secondhand reserve, this might be a problem.”