How to throw: Deploying a reserve parachute

If you have to throw your reserve parachute while flying then you want things to go without a hitch. Matt Warren asked some expert pilots for their advice on reserve deployment when paragliding, paramotoring and hang gliding

“First, you must be prepared to throw it – and early,” says Tom de Dorlodot, a Red Bull X-Alps veteran and professional pilot. “Many people leave it too late and break their back. In fact, when all goes to shit, it should be your first option.”

He adds: “If you’ve already tried it out on an SIV, you’ll understand how it works and be more prepared for that. Of course, sometimes, you’ll be in a right mess, throw your reserve, and all the twists in your glider will come out. That’s annoying, but at least you’ll be safe.”

You also need to think about how you’ll throw it – and this can start on the ground, not just in your pre-flight checks, but in understanding and being familiar with your harness.

“First, you need to know exactly where your handle is. Check it’s in place, on the right side for you – perhaps you’re using someone else’s harness, or it’s just been repacked and the handle’s been put on the wrong side – and that the pins are in: the handle can often drop out on the way to take-off. In the air, practise reaching for it. Know how to find the handle without thinking about it.

“How you throw it is also very important. You have to pop the pins, pull the reserve out strongly, look at what the glider is doing and then throw it hard away from your wing. If you’re in an auto-rotation, for example, don’t throw it in front of the glider or your reserve will get caught in the lines. You need to throw it behind the glider.

“And remember it’s not just a case of throwing your reserve and that’s it. You also need to get your paraglider in so it doesn’t fight against your rescue. Generally, I take one of the brakes, wrap the line around my hand and pull it all the way in until I can grab the wing tip. I then bunch the glider up between my legs. This also helps when you land.

“I was flying acro once when it all went wrong and I threw my round reserve. I came down really fast into a huge cattle trough, but the paraglider, which was stuffed between my legs, acted like another airbag.” 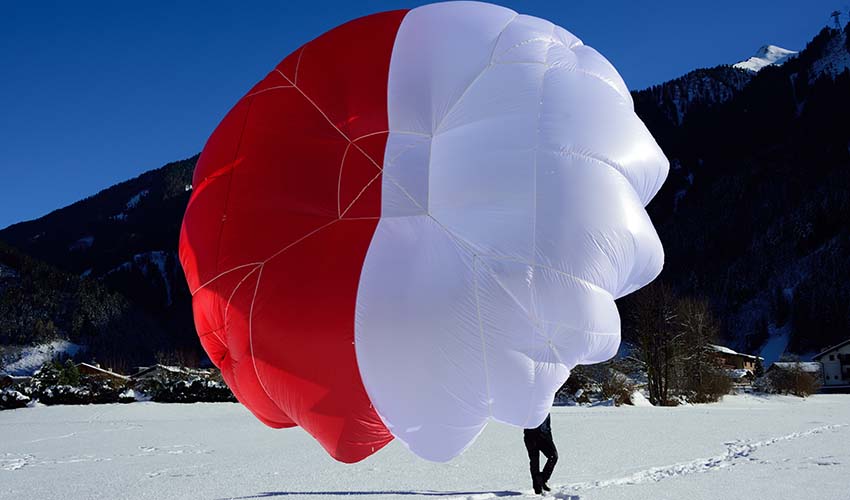 A round parachute, the Donut by AirDesign. Photo: AirDesign

Randi Eriksen has advice on what to do if you do end up in a horrible mess. “It depends on the circumstances. Certainly don’t take too long trying to fix the problem – depending on your height, of course – before throwing your rescue. In terms of getting the paraglider in after deployment, we have tried different methods. Certainly the longer you wait after deployment, the harder it is to get the glider in, so grab in as much of your glider as possible as soon as possible after throwing your reserve.

“What you grab depends on what you can reach. We have tried being asymmetrical and pulling in one wing tip, which worked really well one time, but was a catastrophe the next.

“We then tried only the brake lines, pulled in symmetrically. This also worked one time and was very messy the next. It really does depend on what is happening.

“Whatever you do, though, try and bring the paraglider into you as tightly as possible. Paragliders can really interfere with your reserve if you leave them flying.”

Chris White: “When deploying a reserve, the key thing to remember is that the parachute comes out of the harness in the opposite way to which it went in.

“In other words, if the reserve sits sideways on a shelf beneath the seat, then you must pull it out sideways. In this situation, if you pop the pins and then pull it up towards your chin, as if you were doing a bicep curl, then you’re trying to pull it out at 90 degrees from the angle it went in.

“The other thing is to swing it – and then let it go. A lot of people forget that.”

Tom: “You should also always fly with a hook knife [within easy reach]. Not many people do, but it means you can cut a paraglider line if it’s interfering with your reserve, or even cut away your whole paraglider.

“Even if everything works perfectly, though, you’ll find that you come down faster than you think on a reserve – especially if you pick a really light one. You can really easily break your legs.

“The rescue is one protection, the back protection is another, but you should also be ready to do a good parachute landing fall (PLF) – that’s another protection. Always land on your legs and be prepared to roll. I’ve broken my back, and you really don’t want to do that.”

Tom adds that you also need to think about what happens after you land. “Perhaps you’re in a tree or you’ve broken a leg. How do people find you? You can’t always rely on your phone. And it’s often very dangerous to try and get out of the tree.

“The best option is to have a device that can share your location without a phone signal. A tracking device, something like an inReach from Garmin, is essential. I had an accident when I was flying around the Adriatic with Paul Guschlbauer. I’d landed badly in a tree, pushed the button and the helicopter was there in just 16 minutes.” 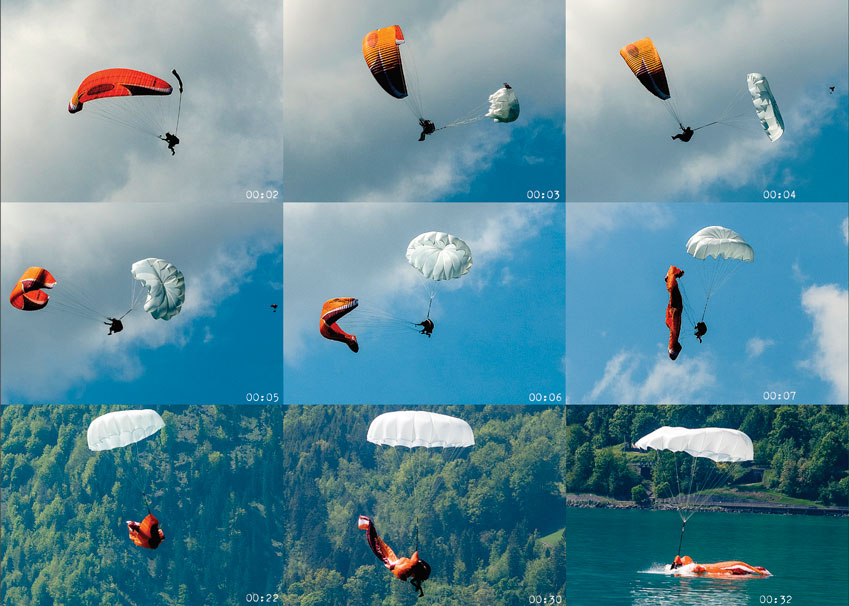 In this deliberate SIV deployment the pulled-down apex round reserve has deployed after four seconds. The main wing stops flying and the pilot starts to gather it in – this allows the parachute to do its job without the main wing interfering. There is some penduluming apparent as the pilot descends and splashes down. Photos: Andy Busslinger

Video: Alex Ledger explains what you need to do

How does flying a paramotor affect your reserve choice?
Two things come to mind: first, being lightweight is more important since motors are already heavy and pilots launch more frequently in the calm of morning or evening with no downhill to help. Second, most motor pilots fly in benign conditions, where reserve deployment is less likely. Consequently, you most likely fly with a small, lightweight ‘meat-saver’ for preserving life not limb.

How to deploy it?
A motor pilot’s mantra for reserve deployment is ‘Kill, Look, Pull, Clear, Throw.’ The primary complication is keeping the reserve out of the prop, thus the ‘Kill’ part – hit the kill-switch and turn off the engine. ‘Clear’ is shorthand for spotting the clear air that assures the best deployment, that is outwards and away from any fouling risks, namely the paraglider and motor. Avoiding throttle entanglement is another concern if you have to use that hand.

How do you pick a reserve?
Descent rate. Opening speed is critical, too, but they seem to all advertise quick opening times. Steerables seem like a great idea for those who fly over inhospitable landing options, but they have tradeoffs. It’s a personal choice that depends mostly on your planned activities. I favour front mounts as they’re less likely to deploy accidentally – a weirdly common phenomenon on motors, especially on side mounts.

What do you fly with?
The easily-mounted, lightweight Way Richly 24. I’m scrawny but the descent rate with the motor will still be 6m/s – equivalent to jumping from two metres. I’d be lucky to avoid breaking something.

Have you ever thrown while paramotoring?
No, thankfully. But weather surprises us, wings surprise us, friends surprise us. There’s good reason to have a little reserve up your sleeve.

“In hang gliding we might go our whole career without ever meeting anyone who has thrown their reserve. But that doesn’t make a reserve less important – if you do need one, there’s little chance that anything else is going to save you. The main risks are the sort of extreme turbulence that you might encounter very, very rarely, or a mid-air collision.

“Hang gliding chutes are designed with a long bridle that should be long enough to clear the wingtip of the glider – so that means a longer bridle for a rigid wing compared to a standard flexwing one.

“Now, parachutes are generally mounted on the pilot’s side – it’s the pilot’s choice if it is on the left or the right. Some pilots, particularly those flying aerobatics or who want to be a bit heavier on their wing fly with one on each side.

“We have regular debates over chute size, mainly because we always carry it but seldom use it. Very small chutes were fashionable in the 1980s but that’s now regarded as a bad idea. Usually, we use similarly-sized chutes to paragliders, sized for the pilot’s weight. On flexwings, the glider weight is usually disregarded – but many rigid wing pilots choose a larger chute to include the glider weight. It’s the individual’s decision.

Video: Flyhighadventure captured this reserve deployment at an air show

“The most important thing for us is a quick deployment. If something goes badly wrong and the chute isn’t thrown straight away, there is a good chance the wreckage will start to spin violently. Then there can be so much G that a deployment could be very difficult or impossible. After deployment, that spin can still occur, or continue – but with reduced violence. For that reason, many pilots choose to have a swivel sewn into the bridle to try and prevent the lines winding up and gradually closing the chute.

“The chute is not normally rated for a full-speed deployment as that would add a lot of weight to its construction. What we have is something with a ‘good chance’ of structural integrity in a freefall situation, but we do wonder about full-speed deployment – with the glider already going 140km/h plus. Some pilots have a Z sewn-section in the bridle designed to minimise the deployment shock, known as a screamer.

“I deployed my chute once. There was a dust devil and at 180m the glider suddenly stood up vertical, tail slid and tumbled. I threw the chute well, it opened in a few seconds and I landed gently. The glider was only slightly bent, but my harness was significantly damaged.

“In fact, I was able to launch again half an hour later on a different glider and harness and flew to goal – I didn’t even slip one place in the competition ranking!”