It's a B, but it's a top-end B. It's for experienced XC pilots who stay current through the season. Photos: Marcus King
Reviews

UP Kangri review (EN B)

It looks racy on paper, but in the air it flies just as a sporty B should, says Brian Steele

At the very top end of the class, with an eyebrow-raising aspect-ratio of 6.3, this high-B glider is for intermediate and experienced pilots who want performance and passive safety but who are also prepared to fly actively. Lots of agility and a smile factor.

In summer 2019 I received the UP Kangri for review. Sadly, not long afterwards I was out of action through a flying accident. Moving into 2020 we had some bad weather and also of course lockdown here in France.

So excuses for tardiness aside, now that I have had some time on the wing and flown it in a variety of conditions, I can get on with one of the latest reviews ever in the history of Cross Country Magazine.

As I rested up in hospital UP’s marketing material told me that the Kangri is positioned at the top end of the B-class. Its overall mission objective is to be a light and packable wing, ideal for vol-bivouac and other adventures. Although being EN B it is designed to have the performance to excite ambitious XC pilots flying over 40 hours a year.

This all sounded totally fine, and the size S that I was going to test fly weighed in at 3.7kg. One thing that jumped out from the spec sheet was that the wing has a flat aspect ratio of 6.3! I started to imagine that this wing would be one of those that tests well in still air, but in more boisterous air is a bit of a handful. I have flown a few light EN-Cs that twitch and with a few exceptions they tend to rustle a little more than I would like. However, I signed up and UP arranged for a very small box to be sent to me by courier! 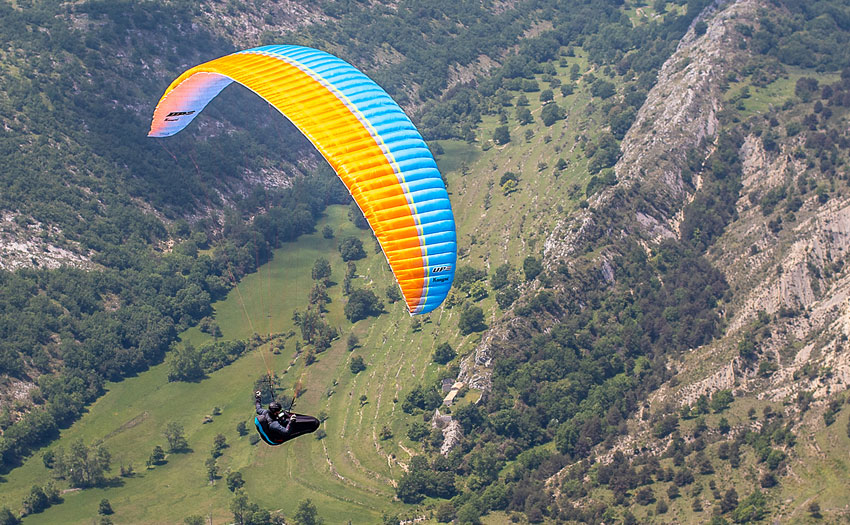 The headline is the aspect ratio (6.3) and the lightweight materials, which on paper point to a demanding wing to fly. In reality the glider is efficient and has beautiful handling.

The wing is constructed with a mix of 32g and 27g Porcher Skytex. Carrying it up to our local launch at Gréolières was an easy 20-minute hike but it was noticeably lighter than my usual EN-C wing.

As I rolled out the wing in spring 2020 I wasn’t too intimidated. It appears quite a high-level B and the ‘aspecty’ nature isn’t really that evident despite the 57 cells. The chord appears reasonable, the cell intakes are generous enough and in terms of sharknoses, this was quite a friendly and moderate shark!

The lightly swept-back wingtips and cell count do hint at the performance on offer. The Aramid and Dyneema unsheathed lineset remind me of an upper C and indeed are used on UP’s Trango X-Race. The lines are available in any colour you want as long as you like red! Despite the lack of colour-coding the wing was very easy to set up. The red lines were easier to spot on a dusty or grassy take-off than my usual hessian-coloured EN-C lines.

I had mixed feelings about the rigid plastic bars for C-control. They seemed to get in the way a little bit. I’d prefer to have soft C-loops instead, I think. The brake keepers were a good combination of clip-in and magnet and I never once found my brake handles lying by my ankles.

I was flying a nice orange and blue wing. The two sections of colour mean it is easy to spot in the air and on the ground and the clean shape of the wing is evident.

Packing the wing up was easy with no degree in origami required to fold it into a compact compression sack. I flew the wing with my Advance Lightness 2 harness. 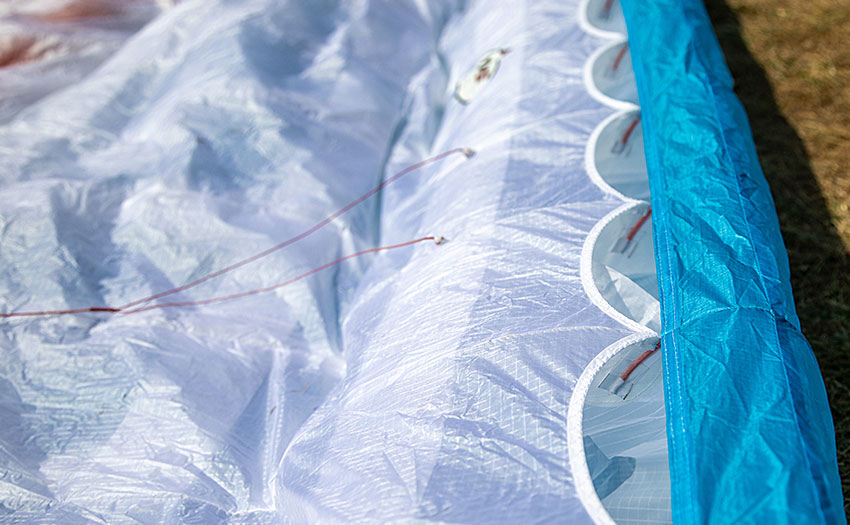 The sharknose and narrow cell openings

Launching was pretty straightforward. The brakes are set up quite short relative to lower-end Bs. I had immediate control of any surges and barely needed to take a wrap to keep the wing on the deck. The glider was easy to inflate from off-centre and to correct using harness pressure or a little bit of footwork. All in all it felt like a very eager B-level wing on launch rather than a specialist, snakey EN-C.

On a very light-wind day I hiked up my local hill above Menton on the Italian border. The take-off was small and quite technical but the wing’s eagerness to inflate and ease of control was a real bonus. Overall the ease of launch is such an important characteristic on vol-biv trips and the wing scored highly on that front.

My first flight was over two hours so I had plenty of time to get to know the wing in medium-strength thermals.

Overhead the wing looks like a B and in most circumstances it felt like a B. The cut-in when entering thermals and the pitch movements were typical of a sharknose wing. I felt I had a reassuring level of feedback about the wing’s next move. Catching pitch movements on brakes was easy and intuitive.

I was at the top end of the weight range and one thing I noticed was that the stall point arrived a little sooner than I expected on landing and when testing stall high above Gréolières. So if you are trading up to the Kangri from a lower B, I’d say that this is one of the few health warnings to an otherwise very easy wing.

Roll stability was one of the highlights. When flying in rougher air the wing can damp out the worst of the punches and kicks that the air throws at you but then when you decide to have some fun or chuck in some tight turns to catch a small thermal, the wing can bank up and load up nicely. 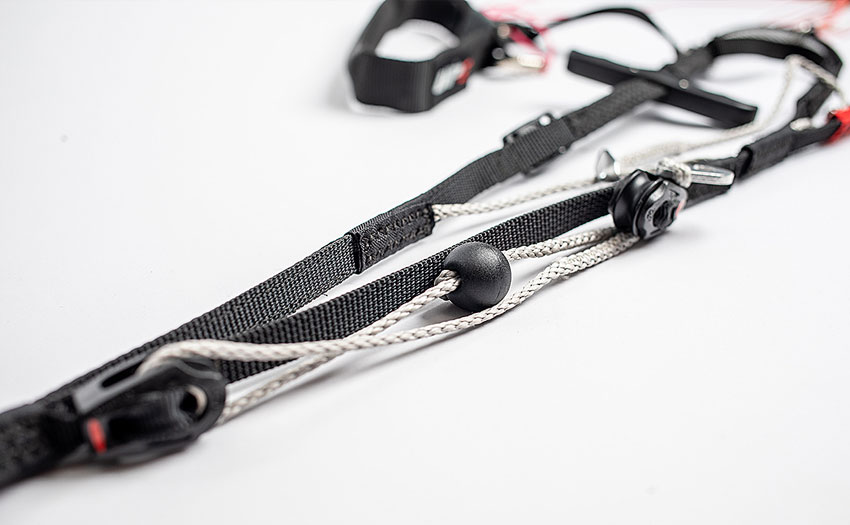 Indeed, it is rare that I have flown a wing with such a high aspect ratio but had so much agility at my fingertips.

Linking turns and changing direction mid-thermal can be a real chore on some EN-Cs and on lighter wings there can be a bit of flexing and yawing before the wing settles into the turn. The Kangri on the other hand just reacts immediately to harness and brake. Once in a turn it is quite settled and the outer brake needs some management but not to the point of distraction.

Carving efficient turns in gentler conditions I had plenty of feedback through the brakes and harness and was able to core well and outclimb a few equivalent gliders that were in my vicinity.

At our local mountain there is a long section where we pass through convergences, changes in wind directions and some turbulence. I took the Kangri for a straight-line blast, trying not to turn for a few kilometres and going as fast as I dared. Bar pressure was medium to light and the wing didn’t take long to settle when moving between trim, half and full bar.

The large handles for C-control were easy to locate. One feeling I had was that they gave a little less finger feedback than a simple loop and I felt on a few occasions I over-corrected a dive as I pulled a little too much pressure than I might have with a different set-up. Direction was easy to maintain and overall the wing felt comfortable and settled at speed.

I didn’t carry a speed-probe but the difference from trim to full bar was in line with UP’s given 16km/h. Glide felt good at speed and into wind and the fact that I was comfortable made me more likely to fly full gas. 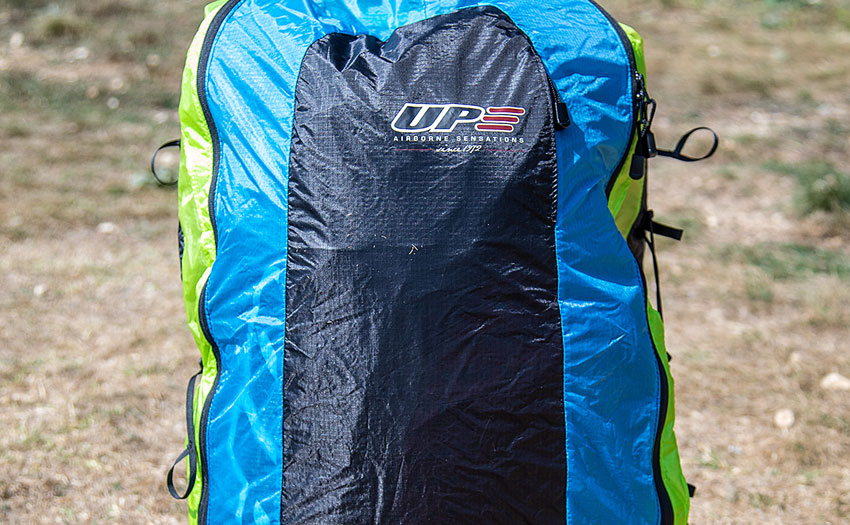 All packed up in the supplied lightweight backpack

In around 10 hours of flying the Kangri I only had one full frontal when being a little overconfident. As mentioned, the brakes are a little short but if I allowed the wing to fly it was very quick to recover. Side collapses were very rare and tended to pop out quite spontaneously.

Big ears are easy to engage and release using dedicated big-ears lines. They don’t have some of the stickiness that I have found on some sharknose wings. As per the test report there was only a very minor dive on exit. Spirals were a real blast.

Landing-wise, on thermic approaches the wing could be kept flat and cut through some of the low turbulence best when flying at trim. Stall point is quite sharp but there is enough pressure build-up to feel it coming and go hands-up if required. Once you commit to a flare it is immediate. 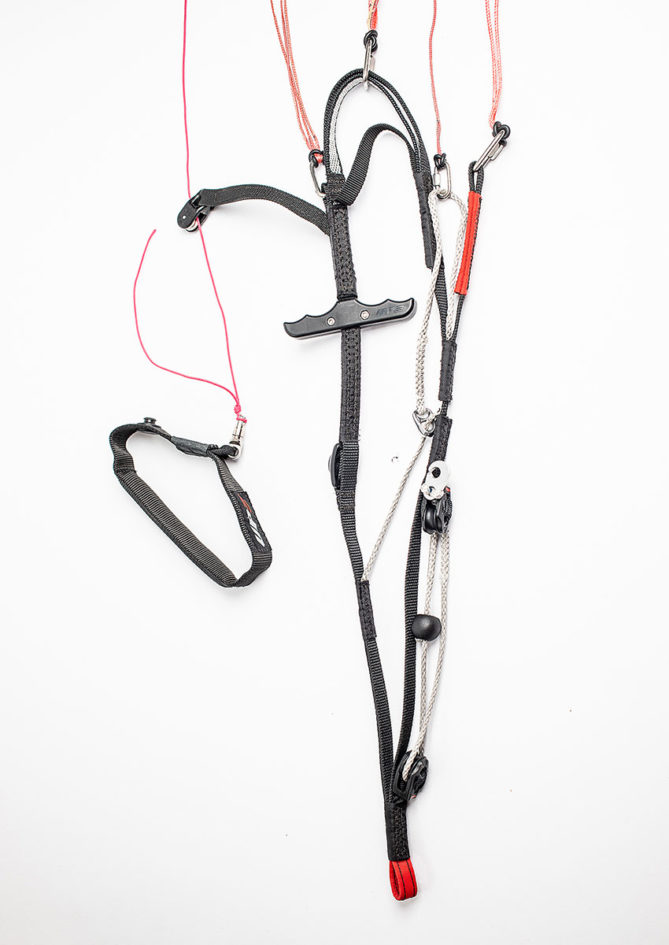 The racy looing riser set – not for beginners

Going back to the aspect ratio and the light design, in some forums and discussions the general consensus is that any big increase in aspect ratio can massively affect manageability and passive safety. Add to that aspect ratio some lightweight materials and the UP Kangri, at least reading from the statistics on paper, should be more of a handful than it is.

It just shows that in real life there really is no substitute to a test flight. Despite the light construction the wing felt like any normal high EN-B and was very solid. There was no flexing or rustling and very few moments where the wing hesitated as if struggling to assert its authority over the air.

A couple of things made me a little concerned. One was that the small size was initially heading for a C-rating, although finally it was certified as a B. The surprise was it was at the lower end of the weight range that it got a C for brake travel. I found the fully loaded wing to be a little abrupt on the brakes but like any wing, once I knew where the limit was I had no problems!

The plus side of having less spongy brakes was a more immediate feeling and an overall feeling of control. 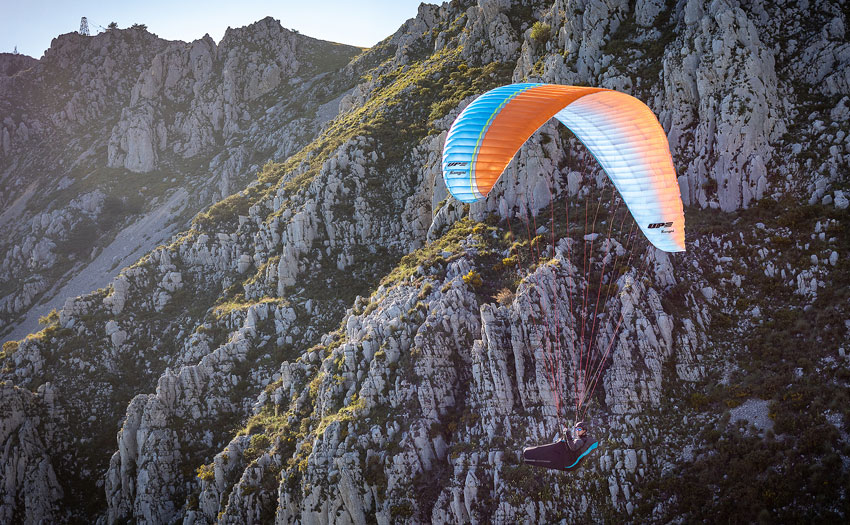 There is an immediate feeling of control

Would I recommend it? Absolutely. After a few months off, the Kangri was the first wing I started flying on. The ease of use and comfort was really welcome as I clipped in for my first flight in six months.

The light weight is evident but there are few obvious downsides in terms of construction and handling of the wing. Once you are flying the impression is of a standard high-B glider. There is the efficiency of a high aspect ratio wing but the fun and agility of a B.

One word of caution though, if you are quite a heavy-handed pilot or not sure you can fly 40 hours a year or more then perhaps stick to a wing with more forgiving brake travel. Overall there is nothing much to worry about if stepping up from a mid-B wing but some finesse is required.

Stepping back onto even quite an easy EN-C later in the season I found I had to step up my skills and missed the agility and smile factor I had on the Kangri. It is definitely one to try if considering the Rush, Iota and other high B’s.

Many thanks to UP for the longterm loan of the wing and patiently waiting for me to recover enough to fly their baby.

Brian Steele lives and flies in the south of France. He flew the UP Kangri (S) at 85kg all up, using an Advance Lightness 2 pod harness.