A little over a decade ago U-Turn launched the Morpheus, an acro wing developed together with legendary acro pilot Mike Küng. At the time Mike wanted a dynamic glider capable of all the acro manoeuvres, but with a safety margin for performing shows. It became legendary in acro circles.

Now, after many requests, U-Turn has launched the Morpheus Next Generation (NG). And just as the old Morpheus was a mild version of their professional acro wing G-Force, the Morpheus NG is the little brother of the very popular Blackout+ and Joker. It will replace the freestyle RedOut.

We were provided with the very first serial specimen. It’s quite a light little package, just 4.5 kg in size 19. The Skytex 38 fabric even feels on the vulnerable side, but after a week of tough conditions in Ölüdeniz I’m convinced that this material will last.

The leading edge has the same half-round cell openings as the old Morpheus and short rods. The glider has clean-looking, colour-coded narrow risers, with all sheathed, coloured lines except the top.

It comes with acro handles, but no trimmers. The speed pulleys are covered so there are no parts where loose lines can catch. It all gives the impression of a very well thought out glider of high quality. 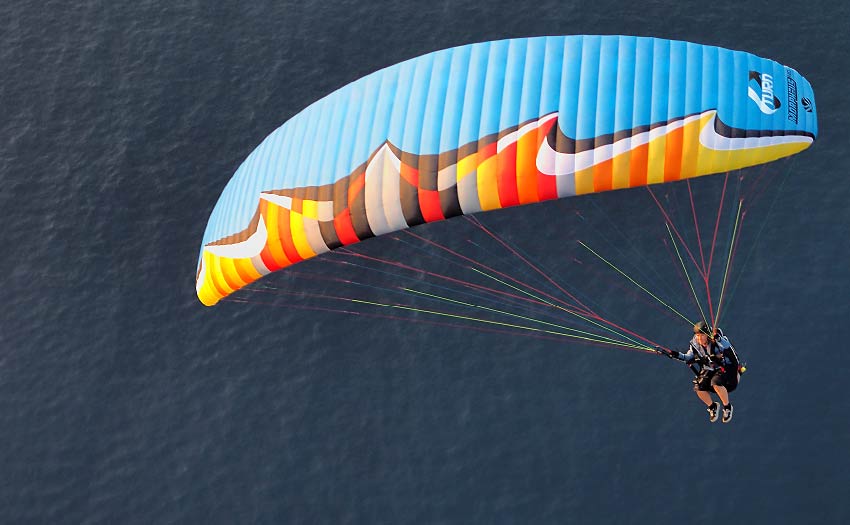 The Morpheus NG has developed from the original Morpheus. U-Turn founder and designer Ernst Strobl explained: “The basic profile as well as the outer shape comes from the Morpheus. Then all the insights from our experience from the Blackout+, Joker and Twinforce RE4 have been incorporated into the development.” Photo: Erwin Voogt

For my first flight I was on the short, steep and rocky north launch on top of Babadağ. I don’t think the review wing had even been in the air before. At least 50 pilots were waiting to take off in the fickle, cross, light-to-nil wind.

When it was my turn I decided to pull up facing the wing, even without much wind, to at least be sure everything looked fine. There was no need to worry: the wing came up fine and, with a bit of a run for enough speed and lift, we launched.

Over the next few days conditions on launch varied from gusty and strong cross winds to light thermals to nil or backwind. The Morpheus NG launched fine in all of those conditions, although it consistently needed a bit of brake to stop it overhead and it sometimes seemed to need a bit of persuasion to rise; but nothing that should worry a pilot capable of flying this glider.

Gliding over the flanks of Babadağ and messing about in my harness I immediately noticed the sensitivity for weightshift. Reaction to any brake input is immediate, although I found out later that the total brake travel is actually quite long and safe for an acro glider.

The glider has no split-A risers, but pulling big ears with the outer of three A-lines is easy enough, with medium pressure and a useful sink rate. Because of the sensitivity to weightshift, it was very easy to make turns while holding in the ears.

Pulling a couple of collapses was uneventful. It is easy to keep a straight heading and the wing inflates by itself.

A nice feature is the Stabilo Security Function, an extra pulley on the B-riser through which the stabilo line is fed. It has a red loop to grab and fixes to the riser with Velcro. The idea is that you can always reach and easily pull on the stabilo line in case of a cravat, as that is the surest way to resolve it. But as it is very difficult to induce a cravat on purpose, I was not able to test the efficacy of it. This feature is also fitted to other freestyle and acro gliders from U-Turn.

As expected the glider is fast. The glide speed is generally in between the top-level acro gliders and the tandems, which were both present in large numbers around me. The speed bar pressure is average and the speed increase useful. 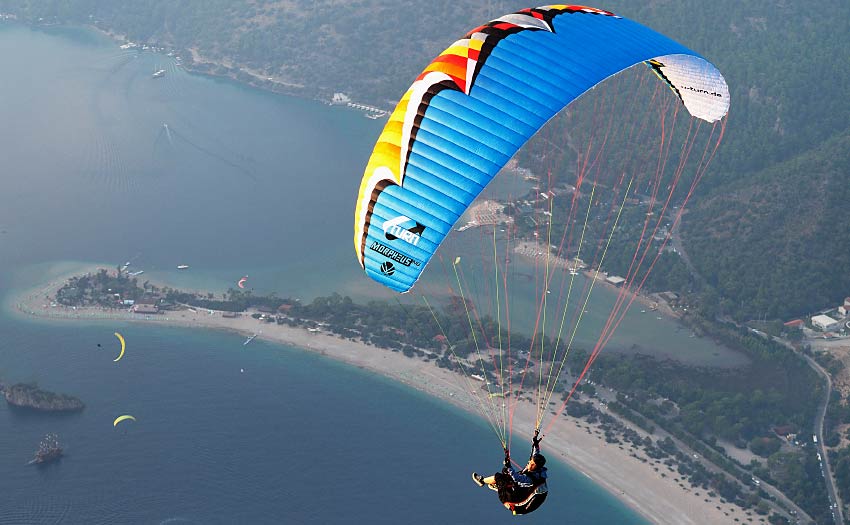 The Morpheus NG is “now close to perfect” says designer Ernst Strobl. “I would have liked it to be even less aggressive. But when we trimmed it slower, we found out that it stayed in deep stall too long at low wing loadings.” The result is a wing that really hits its mark – lots of pilots will have a lot of fun on this one. Photo: Erwin Voogt

U-Turn say that the Morpheus NG has a significantly higher performance profile than a pure-bred acro glider. I can confirm that my glide was better than the acro gliders around me. However, it would be unreasonable to expect the glide of an XC glider, and at times I had to cross the ridge to the sea a lot lower than the bigger gliders around me.

That is not to say you can’t thermal it. Ölüdeniz is not really the place to go for extensive XC flying so I wasn’t flying with a vario, but during one of my glides out I joined a gaggle of gliders circling in the house thermal of the Babadağ 1,700m take-off. I followed the others around and found it easy to go up with them using the clues the Morpheus NG gave me. It is sensitive to moving air so you will know what is happening. The feedback over the brakes was very clear: tightening up considerably on the side of the rising air resulting in a higher brake pressure and even quicker brake response.

Keeping the glider’s sensitivity to weightshift and brake input in mind, I started out with some SATs and spirals. Those behaved as I expected. The timing of the SAT entry is easy to find and not very critical. Some pumps of a rhythmic SAT were easy as well. The brake pressure gets quite high in these manoeuvres and the spin point is clearly indicated, both nice safety features.

The spiral is easy to lead in to within 360° with weightshift and a bit of brake. Leading out is light on the brakes and easy to do, so long as you’re sensitive to prevent a large climb and dive.

Asymmetric spirals and wingovers were a blast! Timing was not a big issue, they would be very high and loopy anyway. I almost started to think that this glider is too easy to learn asymmetric spirals on – you could be tricked into thinking that you’re really good! The timing of this manoeuvre is critical on a larger serial glider and not easy to learn. But switching to my “unnatural” side, the left, taught me that the Morpheus NG does let you know when you’re wrong, by collapsing for example or losing energy. Then, the mild character of the glider shows: it will collapse or dive, but not too aggressively and after that it will sort itself out.

Finally I did a couple of full stalls. That’s where I found out that the Morpheus NG is a real acro glider, although a good-natured one. It doesn’t like to be full stalled and it is very sensitive in backfly. The backfly position was easy to find, but the smallest asymmetry in brakes or weightshift will send it rotating. Quite a bit of experience is needed to pilot these situations correctly.

After getting into some trouble I found that the Morpheus NG did sort itself out. Cravats did not stick, and even a serious dive that I was not able to catch because of a twist had no real consequences, except for a highly elevated heart rate and adrenaline levels on my side. 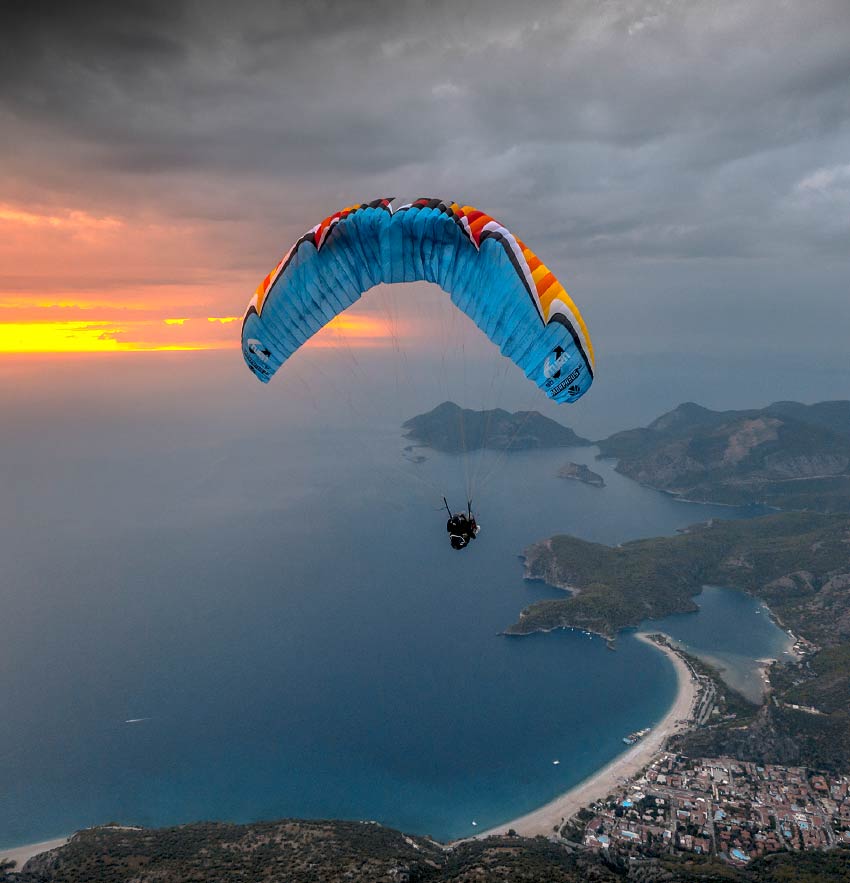 Symmetry and sensitivity is required in full stall and backfly Photo: Peter Loncar

I handed the glider over to the experts for a couple of flights: Petar Loncar and Andres Villamizar. Both are experienced competition acro pilots. They wanted to put the claims of U-Turn to the test: that this is the world’s first infinite tumbling-enabled paraglider with classification (EN-D).

Witnessing the infinites and a number of connections and catching them on landing with a big smile, gave away their verdict: “This is a surprisingly good acro glider for such a large size. Infinity works fine. All the connections are possible such as twisters, misty to heli or mactwist to heli. It feels very safe and easy.”

The Morpheus NG does indeed combine easily accessible dynamics with the safety of an EN-D glider, as U-Turn say. It lets you know if you make a mistake but in a soft and not too aggressive manner. At the same time, it is so capable that for all acro pilots – except competition pilots – it might just be the only glider you’ll ever need.

But make no mistake! This is an acro glider. You should only be flying a glider like this with a lot of experience in stalls and manoeuvres on a larger serial glider. Progress slowly and safely. If you do that, the Morpheus NG will provide loads of fun and smiles.