When I saw Marko Hrgetić’s result at the Monarca Open in Mexico in January – finishing fourth overall and beating every Zeno in the competition – I jumped at the chance to fly the Queen 2.

Could this be a Zeno killer in the C class? I’d flown the King (EN D) through the 2016 season and found it one of the most enjoyable XC wings I’ve ever flown. It had a beautiful, carving turn even when lightly loaded, was really solid on bar, and was just reassuring throughout – an excellent, understanding companion for XC adventures.

The Queen 2 is obviously in a different certification category but in many respects it’ll satisfy the same kind of pilot. It’s accurate to pilot, maintains its focus and solidity even in turbulent cores, and goes round like it’s on rails. These are all characteristics shared by other wings in the 777 range, and are the DNA of its design team, the Valic brothers.

In speed tests, I measured the Queen 2 as having the same top speed as the King: 52km/h. This puts it in line with, or a smidge faster than the Delta 3 and Sigma 10, which I tested late last summer. On glide, it feels even more solid, and it is all-in-all more pleasurable to fly, with slightly shorter brake travel.

I know, as the market becomes increasingly dominated by fewer brands, that there’s a tendency to look at the smaller ones and wonder if they’re worth the punt. I can categorically say that yes, 777 wings are definitely worth trying – I’m convinced their test team put in as many hours’ development and flying as any of the other bigger brands, and the end products are sorted, convincing gliders that have a unique feel and character. 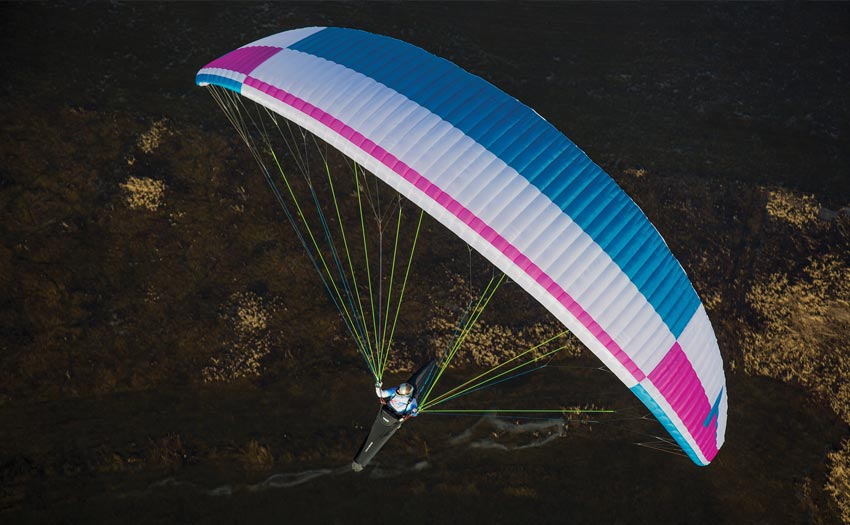 When climbing, the Queen 2 pitches forward and pulls you towards stronger lift. This was really appreciated when down low, 50 km into an XC, hunting for the core. It reminds me a little bit of how a hang glider’s nose drops and accelerates into the core.

The wing is fairly pitch stable, staying above or slightly ahead of you – and in this respect it reminds me quite a lot of the Delta 2. It shares the same ‘nose up’ tendency as you wind into a tight coring turn, helping the wing stay relatively flat as you increase the bank, though it won’t block you from turning really tightly if you need to.

I flew it with the new Kortel Kanibal Race II harness and found it a good combination – you don’t need a really loose harness, as the glider responds well to small weightshift inputs, and you only need to make tiny 2-3cm movements on the inside brake as you thermal to centre it. It feels like fingertip control. The turn radius is obviously better than most higher-aspect wings – I found myself nipping inside Zenos on climbs. 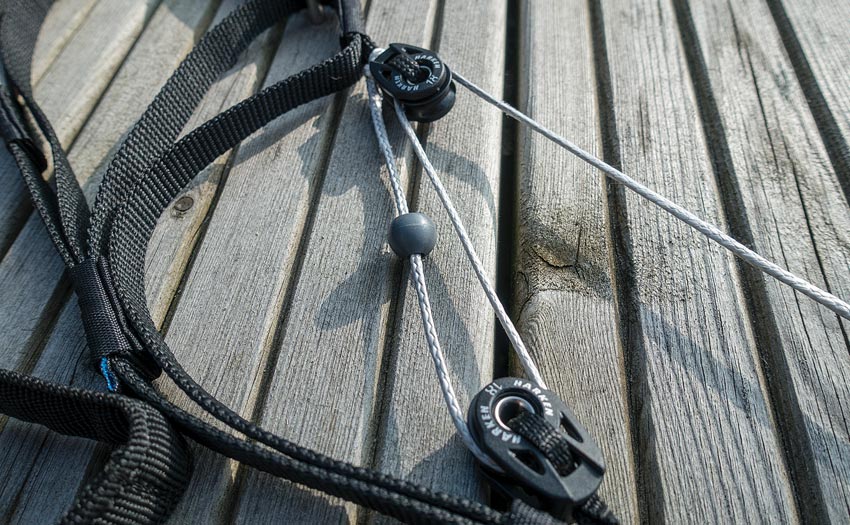 A grey stopper gears the speed-system ratio up from 3:1 to 2:1 in the last section of travel

On glide, I found it hard to reach full speed. A small stopper ball converts the speed system from a 3:1 to a 2:1 gearing ratio as it closes down to 3cm from the pulleys touching. This loads up the speed system in the final section of travel, but at 15.5cm pulley-to-pulley, it is quite a long speed system, so shorten the length of the lines to your bar as much as is safely possible to ensure you can hit top speed if needed.

I generally glided at 2/3 bar, at around 47-48km/h. Pulling the Cs results in an unsightly spanwise crease between the B and C lines. I found it best to rest my hands on the grey strap that bridges between the B and C risers – this gave a sense of the glider’s pitch movements, and I could give short jabs down if needed. But generally, the wing is very stable on bar. At one stage I was pushing hard on bar through 3-4 m/s of consistent strong lift under a hefty cloud to escape getting sucked into airspace, and it was absolutely solid.

If you’re after a high performance three-liner, you’ll be really happy with this 6.3 aspect-ratio wing. The climb is excellent, with lovely feedback, the ability to turn inside two-liners, and an efficient sink rate. On glide, I felt more confident to push more bar than I have with some other Cs – I found the Queen 2 a little more solid at 2/3 bar in rough air than the Sigma 10, for example. It’s similar to the Delta 3 in this respect, but I think it’s a little more fun to fly… more intuitive, more like a Delta 2.

As mentioned, our speed tests using the Flymaster ASI probes showed it’s one of the fastest Cs, no faster than the Sigma 10 or Delta 3, but with as much usable speed as the Delta 3, in as wide a variety of turbulent air. 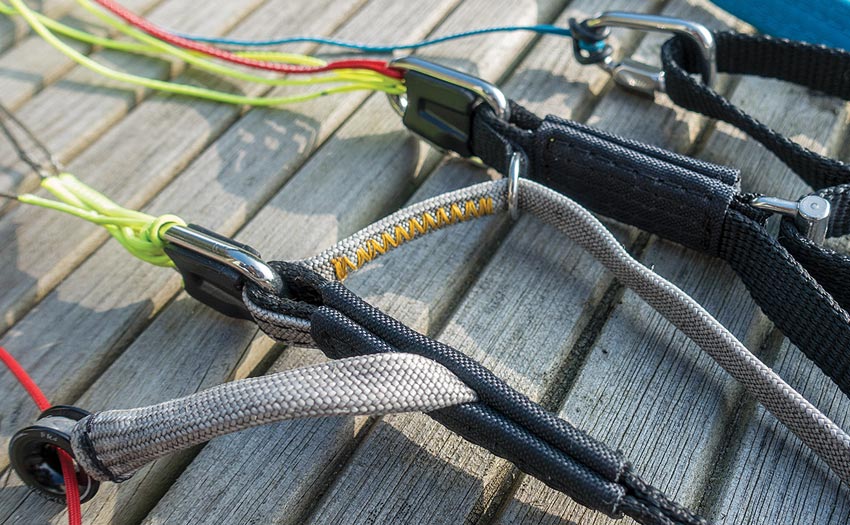 On glide rest the edge of your hands on the grey strap that bridges the B and C risers. This makes for more efficient rear-riser control. The riser set-up is intricately designed – as complex as any

I’d agree with the many pilots online who’ve said the wing feels best heavily loaded. I flew the MS, and it felt great at 98-99kg. It is a little bigger in size than other brands’ MS wings, so it makes sense to fly it fairly heavy.

Like the King – which I often flew at 7-8kg below the top of the range – the handling remains excellent whatever weight you fly it at, but I think you lose a bit of the solid pitch behaviour at lighter loadings. Marko Hrgetić flew at 99kg at the Monarca Open and felt this was a perfect weight for strong air. 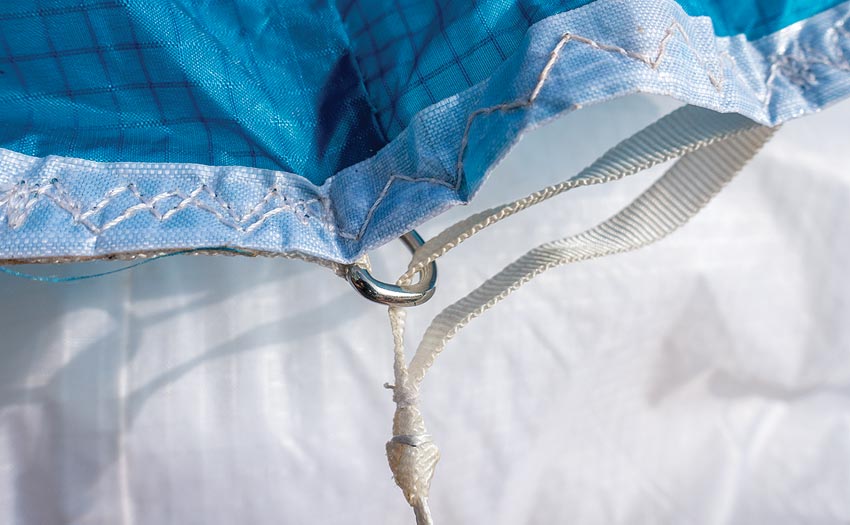 The trailing edge is sharp, and the brake fan is optimised to give 777’s typically precise handling qualities

Inducing big ears is easy with split As, and they are a little slow to clear afterwards – so they’re ideal for use to aid descent before pushing the bar, as they tend to stick in. They don’t catch like the Delta 3’s do, but inducing 50% asymmetrics, you do need to give a small pump to clear them completely.

The spin point is really obvious – it’s nice and deep, way below normal brake range, and the glider wants to roll towards the turn all the time. When stalling, Triple-7 advise pulling the brakes slightly outwards to pull down harder to stop the wing from bending back so quickly, and in this way give the pilot a cleaner stall. 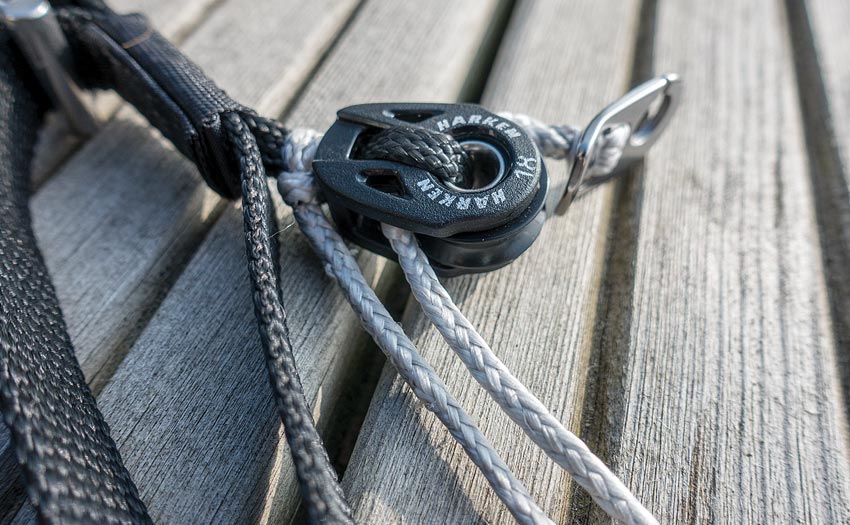 OK, it might have slayed a few in Mexico in January, but the Queen 2 isn’t an outright Zeno killer. Two-liners will always pull away flatter towards the horizon at three-quarters bar, but in the right hands, choosing the right lines, and on the right kind of day, you’ll do very well on a Queen 2.

What really impressed me are the Queen 2’s pitch behaviour in the core, the way it pulls you into stronger lift, and also its rock-solidness on bar.

EN-B pilots moving up will find a thoroughbred C in all aspects, but should practise some 50% collapses (in an appropriate place) to get used to its slight stickiness from opening after side collapses.

The new class of EN-Cs really are impressive, performing as well as the A/R 7.0 designs of 2016, but with better post-collapse behaviour and more joyful handling. This is a golden age for XC wings.

XC: On glide, the wing feels like the King, and cuts through turbulence reassuringly – more easily than the Sigma 10, and perhaps like the Delta 3. You’ve managed this without using long plastic rods. How does that help stability at speed?

UV: For a long time long rods have been used to smooth out the surface, but they do bring some problems with packing. We stumbled upon new technology where we were able to shorten the length of the plastic and still have a clean surface.

The load distribution optimisation is achieved with a new, thin, plastic S-shaped line on the cell walls where we distribute the load more evenly from the line-attachment points to the top surface. This makes for nicer tensioning. Also, when on the brakes the surface is cleaner than with long plastics.

To create that stable feel on bar, you need to make a profile where the wing is pressurised at any given angle of attack. It’s a dark art … you also need to have the right profile that is well behaved at all angles of attack.

The wing feels natural to fly, pitch stable, with a good level of feedback in climbs. It reminds me a little of the Delta 2, but it’s even quicker to respond to short brake inputs. It’s accessible and finessed… The design took a long time and for sure this is reflected in the glider. It’s a complex wing in terms of internal construction. The tensioning through the material has been optimised for the complete speed range, which means the pilot will get the most out of it either climbing or going on bar. The new profile brings this feeling of finesse to the brake control, with quite a thin trailing edge supported with mini-ribs.

Any need to retrim after a few months’ use?

Any wing needs to be checked after 100 hours, but there is something new in the line setup of the Queen 2. We use PPSL sheathed Dyneema main lines for the As and Bs, while Cs are made from new MagixPro aramid lines. PPSL Dyneema works well under load so it does not stretch, but it does shrink when not loaded, so it’s ideal for the front lines. The Cs are not loaded so much, so we used the MagixPro lines there. This means the wing will stay tuned for longer.

Hugh Miller is an XC addict who’s placed in the top 3 of his national league for the past 5 years. He has been reviewing for Cross Country since 1998. Hugh flew the MS at 95-99 kg weights in Lanzarote and the UK. His 15 hours of testing including XC flying, soaring and some limited SIV.