The glider is aimed at XC pilots who want to fly big XCs in strong conditions. It has been inspired by Triple Seven's CCC wing, the Gambit. Photo: Triple Seven
Reviews

It took the team at Triple Seven a little over five years to finally replace the iconic King, a glider considered by many at the time as the best performing three-liner D out there. Will the King 2 live up to its predecessor?

As a high-performance enthusiast I jumped at the chance to fly Triple Seven’s new XC weapon and find out. I flew the Size MS (80-97kg) loaded at 95kg with Skywalk Range X-Alps 2 and Swing Connect Race Lite harnesses, mainly in strong spring conditions in the Swiss Alps.

The King 2 arrived in a bigger box than I had expected for a single solo paraglider. The glider came in a cleverly-designed concertina bag, wrapped around two inflatable cushions to keep the plastic rods in the glider from bending. When laying out the wing for the first time I immediately noticed the high number of those plastic rods: they run from the leading edge to the trailing edge and go all the way to the tips.

This amount of plastic is in part what makes it heavier than its predecessor (5.6kg in size MS compared with 5.1kg for the original King in S.) However, a direct comparison of the weight of the glider is a little unfair. The original King was available in three sizes, covering a total weight-range from 75kg to 125kg. The King 2 is available in four sizes, covering a total weight range from 70kg to 119kg. At 95kg I would fall directly between being at the very top of the size S and low in the size M for the original King. Either way, the sizing has shifted slightly for the King 2, so if you are already flying a King and want to fly the King 2, check the sizing chart. 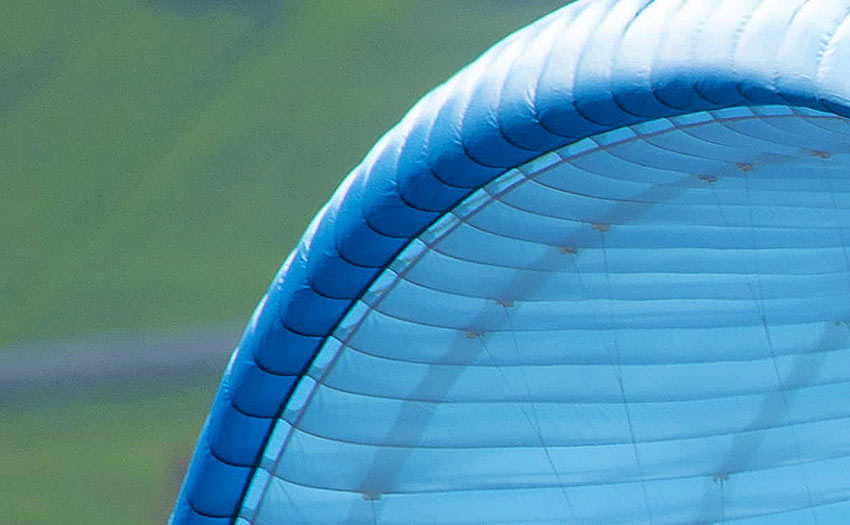 Triple Seven’s leading edges feature very narrow cell openings. This is down to their Back Position Intake technology, which is all about optimising maximum info and internal pressure at all angles of attack, for better performance and more collapse resistance. Photo: Triple Seven

The cell count of the new King 2 is higher than the King. At 88 cells the King 2 has 16 more cells than the first King, and perhaps the highest number in the D category. A radical sharknose, high flat aspect-ratio of 6.9 and small cell openings make this three-line design look very sporty indeed. (For comparison, the King had an A/R of 6.98.)

The King 2 colour scheme is simple: mainly one colour on the top and bottom of the sail with just a couple of stripes near the tips. Triple Seven argue that having fewer seams in the glider helps to maintain better internal pressure. The material used is Dominico 30 on the top and Skytex 27 on the bottom surface, a change from Dominico 30 used throughout in the King. 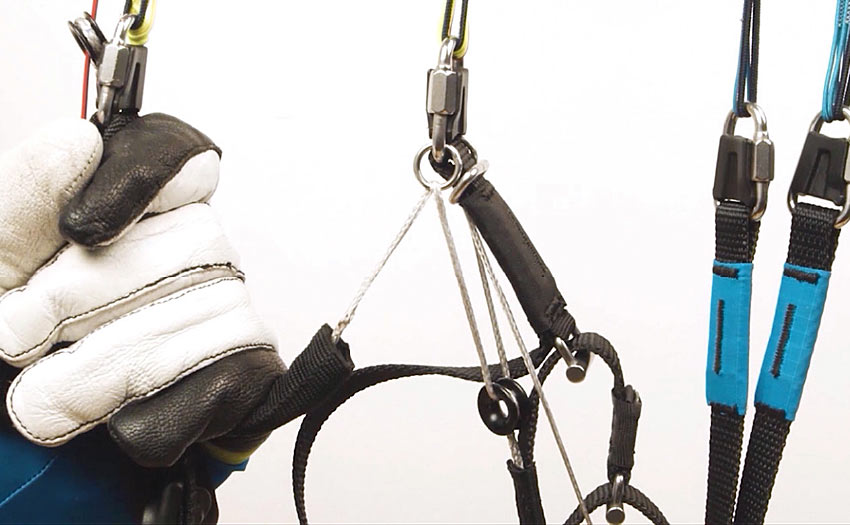 The risers (13mm Kevlar-reinforced nylon webbing) feature Triple Seven’s easy B/C system to achieve optimum rear-riser control. Pulleys are high-quality Harken 18mm ball-bearing. You can see a video of this working at vimeo.com/415559963

With such a pedigree, the obvious question is why make the King 2 a three-liner rather than a two-liner or a hybrid 3/2-liner? Triple Seven’s Matjaz Klemencic said it is to serve those pilots who want high performance but still want the slightly easier in-flight workload that three-liners provide.

“When starting this project we believed we could still squeeze more performance into the three-line segment, match the two-liners in the D-class, and still provide pilots with the safety of a three-liner,” he said.

“There are many good XC pilots who cherish the three-line concept when conditions become wild somewhere in the mountains, therefore we decided we make the King 2 in the way it is made.”

Launching the King 2 into a steady uphill breeze is fairly straightforward: slow at the beginning with a bit of a shoot once it fully inflates.

Starting into low, nil- or a little backwind however requires a bit of practice. The A-risers are shorter than the B’s and C’s, so it is best to grab the lines 10cm to 20cm above the maillon to have enough leverage on the leading edge. The manual also recommends starting with a strong pull and I would advise practising on the ground first to master nil-wind launches on it, especially before trying it on sketchy take-offs. 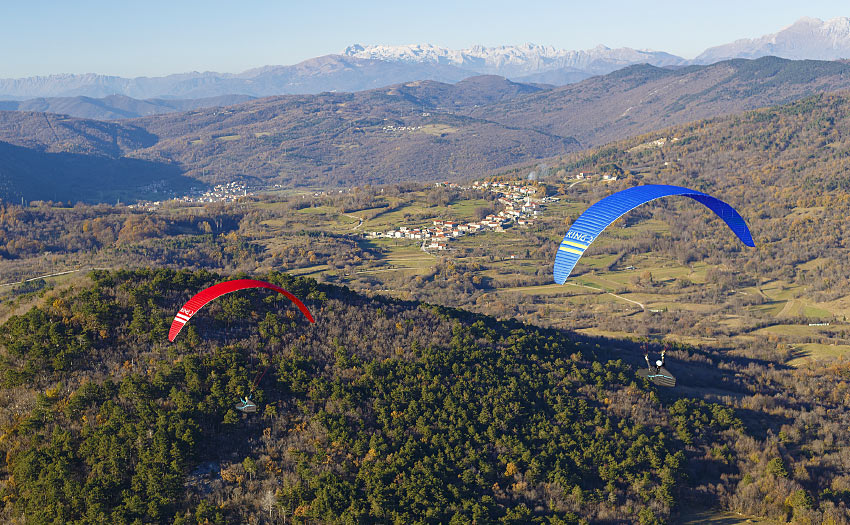 In flight the feeling is of complete authority while not having to take too much care of the wingtips. It’s a very comfortable, precise and pleasurable glider to fly. Photo: Triple Seven

Once in the air and hooking into the first thermal the brake pressure felt quite moderate, gently biting into the core and allowing you to stay in it with remarkable authority while not having to take that much care of the wingtips. This is a feeling I only remember having had once before when I flew overloaded on a 19m2 Niviuk Icepeak 6 some nine years ago. It’s a good thing and makes the glider a very pleasurable machine to fly.

Likewise, despite its relatively high aspect ratio, the King 2 has a good degree of span-wise cohesion while still giving enough feedback to help prevent collapses.

I asked Matjaz how Triple Seven had achieved that much authority in the handling considering the A/R of 6.9. He said: “Because of the complex internal construction and the high number of cells, the King 2 is quite rigid, which means that it copes with disturbances in flight better than most. This creates that good authority for the pilot, allowing them to feel safe even in strong conditions.” It is, he added, “a well-tuned wing and any Alpine pilot will cherish its manoeuvrability,” and I don’t disagree.

However, despite that comfort, authority and feeling of overall safety it’s important not to forget that the King 2 is still an EN D glider and we should not become complacent while flying it. Gliding in moving air still requires a good degree of active flying, made easier and more efficient by the B/C rear-riser control system which, despite not using pulleys, still feels very smooth and intuitive. 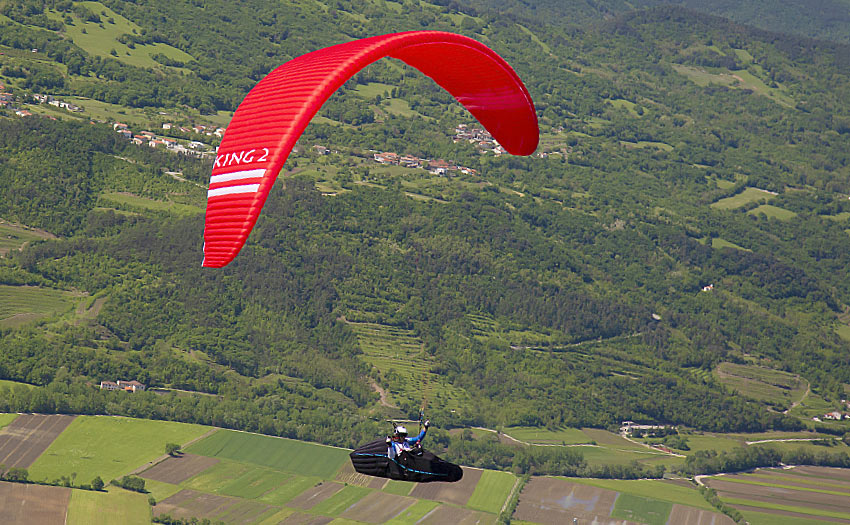 The King is fast, very fast, in fact it’s faster than some two-liner EN Ds. Even at half-bar you can already feel a significant increase in the speed while still maintaining good enough glide performance.

Matjaz credits Triple Seven’s ongoing work with creating thinner profiles and narrower cell openings – making the glider more blade-like – for this step up in performance while staying within the bounds of the EN class. “If you look at the King 2 you’ll notice that the wing has more attachment points than the previous version,” he explained. “With this additional support of the canopy we were able to create a super-thin aerofoil, which brings better performance across the full regime of flying.”

He added: “The small cell openings are correlated to the aerofoil of the wing. The thinner profile also equals a smaller volume of air in the canopy. This ratio means it’s possible to have narrower cell openings.

“The design still needs to allow the canopy to maintain the significant pressure through the full speed range, which we can only achieve with the right positioning of the air intakes. We have a lot of experience in this now, so it works successfully across the full range of EN standards.”

These narrow cell openings are now a trademark of Triple Seven gliders and can be seen across all their XC wings.

Getting down you can choose to use big ears, which work well and feel quite stable with only a little input needed to reopen them. Or you can do wingovers, which are a bit more exciting, gather energy very fast, and quickly turn into loops, which is certainly fun or terrifying, depending on the pilot.

On harnesses, I flew the King 2 with both a seatboard and a seatboardless harness and my conclusion is that even though I enjoyed the intuition without a seatboard, I found a better balance of stability, feedback and handling while using a seatboard harness.

Triple Seven have built a glider that is as potentially disruptive to the three-line EN D category as the first King was back in 2015. The handling, solidity, B/C control system and top performance in its class make the King 2 one of the best three-liners ever created and a great contender against some two-liners.

The King 2 then is the perfect weapon for those XC hounds who enjoy devouring kilometres on days with strong conditions but who want to keep the benefits of a three-line configuration. I also wouldn’t be surprised to see talented pilots win serial class comps on this wing.