Syride’s Sys’Nav flight instruments are compact varios particularly suited to hike-and-fly or tandem pilots who want all the functionality of a full GPS/Vario in a compact package. Last year the company launched their latest version, the Sys’Nav XL.

Compared to previous models it has a bigger screen, better audio and Bluetooth connectivity. The instrument retains all the functionality of the previous versions, so it includes airspace warnings, competition task navigation and more.

Antoine Girard and François Ragolski took final prototypes with them on their ground-breaking trip to Pakistan last year where they  both proved the instrument works well in anger, flying at sub-zero temperatures above 8,000m in the Karakoram. I got to test mine in the slightly lower (and warmer) surroundings of the southern French Alps. 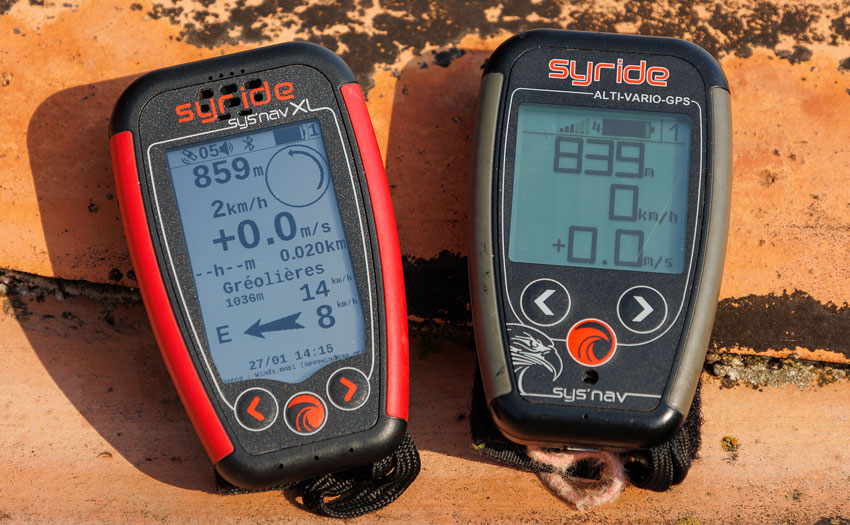 The new Sys’Nav XL on the left with the older version on the right. The larger and clearer screen is obvious. Photo: Marcus King

The first thing to notice is the size of the screen, which is 30% larger than previous versions. The case itself is the same size, although they have managed to reduce the weight from 90g to 81g.

Switch on and the display is obviously much clearer too. The Sys’Nav XL uses active-matrix reflective technology with more contrast and a higher resolution than before. In practice this means it is easy to read even in bright sunshine. It also means you can fit more information on the screen.

Like previous versions, there are four customisable screens. But while previous versions had space for only three large numerical display blocks, the XL adds space for at least three more. With the extra resolution it means you can fit quite a bit of data on one screen easily; I managed to squeeze in seven data items on my front screen including graphical wind displays.

The screen layout is modified using Syride’s online tool, which is a breeze to use. This configurator is also used to set which screens, if any, to automatically switch to when thermalling, on glide, close to a waypoint or close to airspace.

This can’t be changed on the instrument, so once you are happy with your layouts you download a file and upload it to the instrument using your computer and Syride’s PC-Tool software. This software can also be used to download flights, modify the instrument settings and update the firmware. 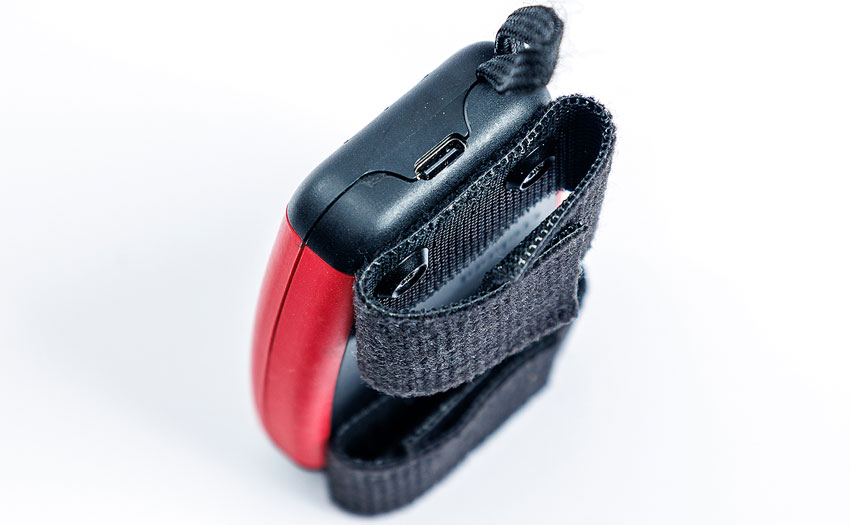 Connectivity and the app

Connecting and charging is via USB-C. The new software allows you to access flights as though it is a USB drive, so no need for proprietary software. The XL also adds Bluetooth connectivity.

Syride’s app is available for both Android and iOS, so the first time you use your phone with the instrument you have to pair them. Once that’s done I found they usually reconnected automatically as soon as I switched on. If they didn’t I just had to open the app to reconnect. In use the connection was stable. 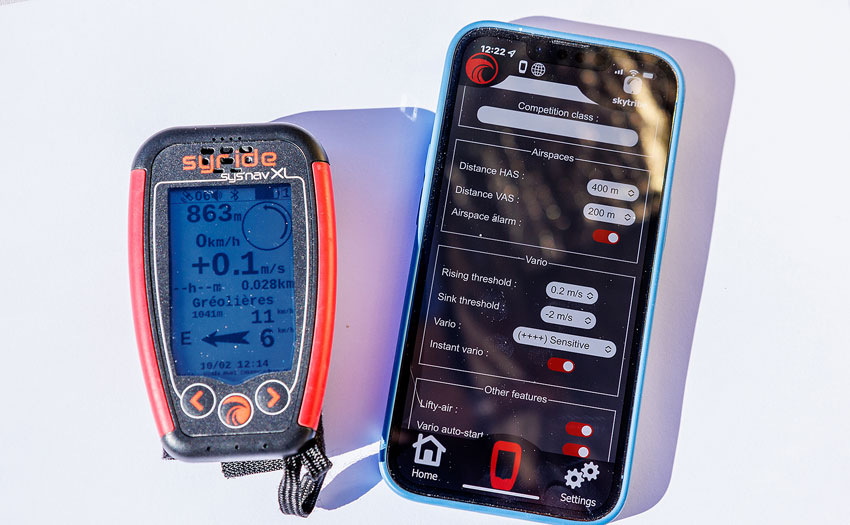 The Syride app allows you to update instrument settings easily. It can also send data to live-tracking system and weather info to the instrument.

The app allows you to use your phone to send live-tracking info and to receive live wind information from winds.mobi to display on the instrument’s screen. You can choose to display data from the closest station, or prioritise stations in the valley, on the peaks or an individual station.

This has to be set when designing the screen, but hopefully this is something you will be able to choose from the app in the future. Setting priority for valley stations is particularly useful for checking valley breezes. 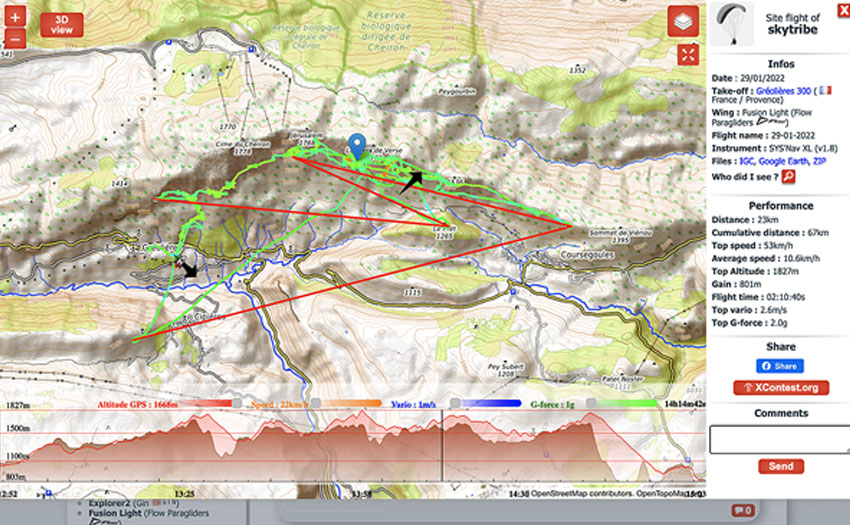 With the app connected via Bluetooth flights are automatically sent to Syride’s system as soon as you land. 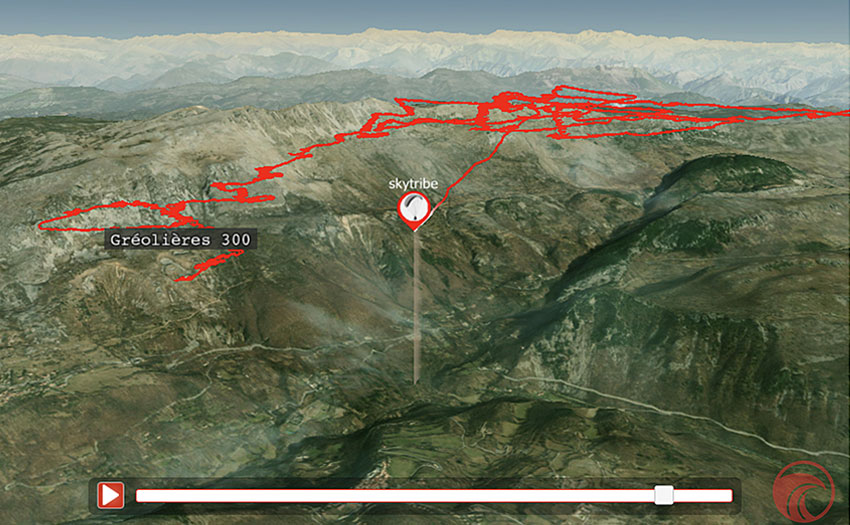 They can be replayed in 2D and 3D, both of which are very good. The same views are also available for live tracking.

Live tracking only works with Syride’s own website, and currently you are unable to forward the information to any other system. It does however work well and even has a 3D view for those watching you fly. You can choose for your live-track to be public or private.

Once you’ve landed the instrument/app can be set to automatically upload the flight log to Syride’s website where it can be replayed in 2D and 3D. It can then forward the flight automatically to XContest or DHV XC sites. During my testing this worked flawlessly. Future updates to the apps are planned to allow setting of routes and scanning task QR codes.

You can also choose to use the Sys’Nav XL with another app such as Navigator, XCTrack or FlySkyHy as an external sensor. At the moment this means you are unable to get the wind information at the same time on the instrument, although Syride plan to allow to connect to a third-party app through the Syride app, so you get the best of both worlds. 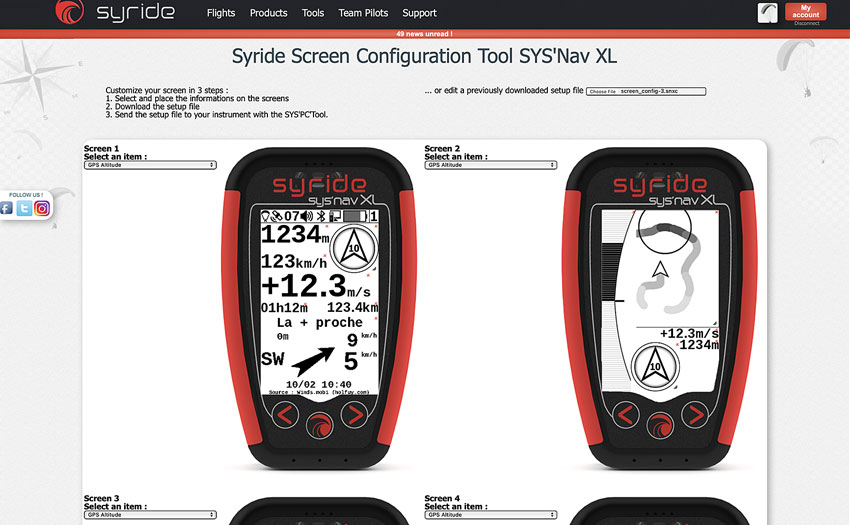 One other major change Syride have made to the instrument is the change from a buzzer to a proper speaker, which is twice as powerful as the one used in their bigger Sys’Evolution. It now has a loud, clear sound that is comfortable to listen to rather than the slightly grating buzzer from before.

The vario can be set to different levels of sensitivity and has an instant-vario function as well as a lifty-air buzzer, although Syride have decided not to turn these on by default.

In use I found the default settings to work well but increased the sensitivity a bit as I am used to the very sensitive XCTracer. There is a configurator on the website that allows you to set the frequency played for different levels of sink and lift.

Mounting on the risers

To mount it on your risers there is a small security loop you should first put the karabiner through. Then I found it best to put the lower Velcro round the karabiner and the upper Velcro around the risers. If used a lot this can wear the risers, so it is best to put a protective sleeve between the riser and the vario, something Syride recommend. 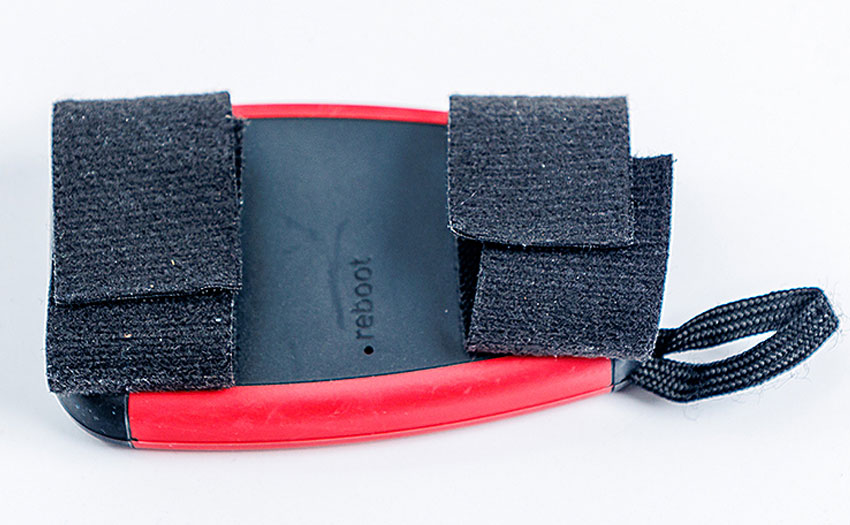 Velcro straps and security loop for attaching to risers

In flight it’s easy to use. Although smaller than on the previous versions the buttons are still big enough. As it is close to your hand it makes the odd button-push easy enough. Navigation is a little limited because of the relatively small screen, but you would probably use an app for that with the on-device display a good backup.

Battery life is lower than previous versions but that is because there is more technology to drive. Syride say volume setting has a big effect on this and I had the volume up fairly high. It is still good for a few days of flying though, and can be easily recharged from a USB battery bank.

The only thing really missing is some form of Flarm beacon. If you fly in an area with lots of sailplanes, as I do, it would be nice not to have to take another device. Syride told me they plan to link their live tracking into the Open Glider Network, but an actual beacon would be best. Of course, then I would want Fanet info too.

The XL is a great upgrade to an already popular instrument. It keeps the same form factor but adds some good extra functionality and is much easier to read. I loved the fact that the Bluetooth functionality just works: once set up you switch on and forget.

It’s a good choice for pilots who want an instrument that can be used standalone but also has the flexibility to work with apps when you need it.