Intuitive with clear feedback, our reviewer had a lot of fun flying in the late season thermals in southern France Photo: Marcus King
Reviews

Supair call The Leaf 2 a “real EN B”. It replaces the original Leaf, which came out in 2016. At the time, the Leaf was the only B in Supair’s range and was a mid-B, but the range has since expanded with the addition of the high-B Step, and the Leaf 2 is targeted at “bottom-to-middle of the B-class” pilots.

Supair’s wing designer Pierre-Yves Alloix says the main change in the design is that the Leaf 2 now has a baby sharknose profile. He says this makes the glider more compact and gives it more pressure at all angles of attack. He adds that a reduced lineset makes the wing easier to handle too, while allowing it to keep the same performance level as the Leaf, even though it now has a slightly lower aspect ratio – 5.3 vs 5.4 on the original. 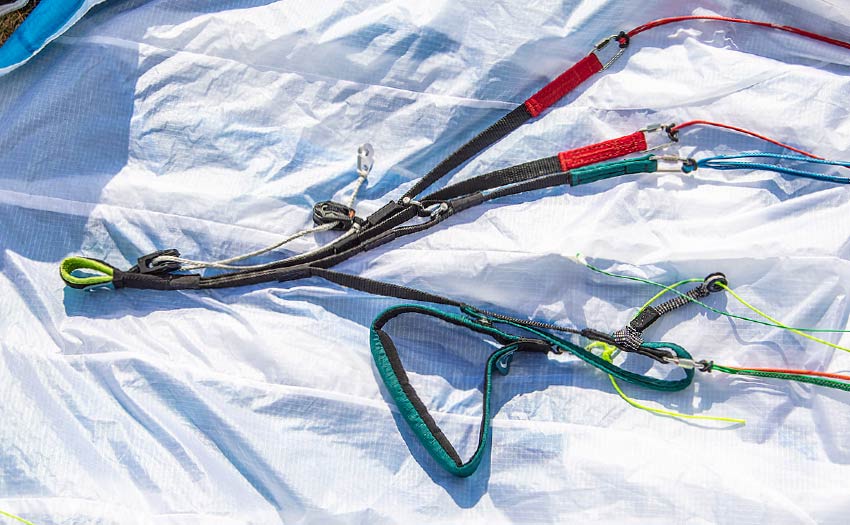 Supair Leaf 2 risers, the lines are sheathed and the brake handles are nicely padded

Like its predecessor, the Leaf 2 is made from Porcher Skytex: 38g/m2 for the top surface, and 32g/m2 underneath. I flew the XS, in the ‘ideal’ part of the weight range according to the chart in their manual. In my size the wing weighs 4.5kg, the same as the original, and also the same as Gin’s Atlas 2.

A look around it on the ground shows what looks like a well-finished wing with neat and tidy stitching, and little touches like the narrow risers which flare to a wider loop to stop them sliding around on the karabiners. The lines are sheathed and the brake handles are nicely padded. Gone is the neoprene – the brakes are now covered in the same green material as the Altirando Lite harness, and they have poppers, which I much prefer to magnets that can fall off easily.

The speed system has chunky Ronstan pulleys, and there are anti-friction rings for the brakes and swivels to keep them from twisting up. The C-risers now also feature handles for rear-riser steering. Supair’s ‘smart miniribs’, which help keep the airflow smooth at the trailing edge, have all-internal stitching. 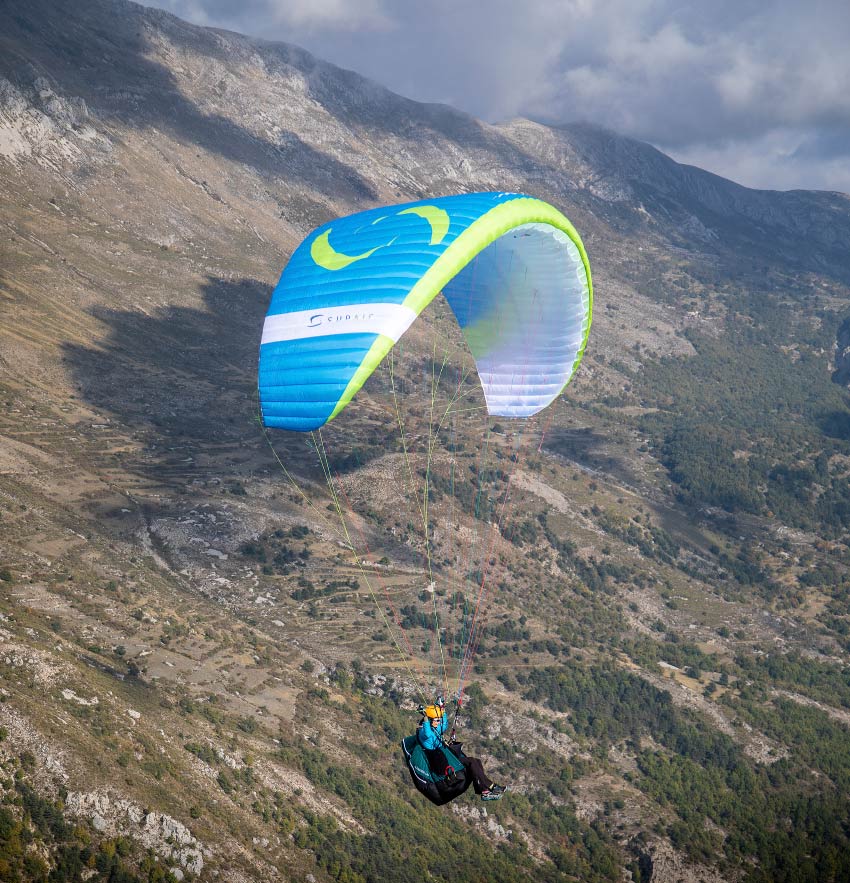 Undemanding and relaxing to fly the Leaf 2 is a classic EN-B for pilots new to the sport. It launches easily, thermals and flies well and is stress free Photo: Marcus King

I tested the wing in autumn conditions in the south of France, so the flying was mostly light soaring and gentle climbs, though a couple of flights were in some fairly punchy conditions. Right from the first flight I really liked this wing, finding it very easy to fly, undemanding and intuitive. It gives clear feedback and the brakes are responsive and immediate, meaning I always felt I could put it where I wanted to.

Stress free ground-control is a great precursor for a relaxing flight, and launching the Leaf 2 is definitely low-stress. The sail feels light and rises smoothly and easily without too much of a pull, and doesn’t need a lot of damping to stop it overflying. If it comes up faster on one side and needs correcting there’s plenty of time to do it.

On my first flight with the Leaf 2, I was expecting a sled-ride to the landing field. The winds were light and we’d arrived on launch just as the gathering clouds completely filled the sky and shut out the sun. It was one of those days when no-one wanted to go first, and it seemed to be pot-luck whether you got a climb after launch, or didn’t.

I got lucky, and a weak thermal off launch allowed me to make it to the ‘landslide’ along the ridge, which was spot lit by the only bit of sun around. The Leaf 2’s sink rate felt good, and unambiguous feedback made it easy to feel what lift there was. Precise, direct brakes made it easy to put the wing where I wanted it, helping make the most of the weak lift.

The sunspot worked its magic, and whoever made it into its beam was rewarded with a lift out to go play with the lowering clouds. A fun hour or so of bobbing in and out of clouds ensued, and gave me plenty of opportunity to test out big ears. There is a separate big-ears riser, and the ears go in easily without any drama or thrashing around. They’re not huge ears, and they need to be held in, rolling out pretty much as soon as you let go.

In their manual Supair recommend using some speedbar with big ears, to ensure you keep plenty of airspeed. The speedbar is easy to push with moderate pressure, and Supair say full bar adds 15km/h to what feels like a reasonable trim speed. I didn’t get any speed probe measurements, but looking at the other gliders around me the Leaf 2’s speed seems to be on a par with wings of a similar level.

Subsequent flights provided some punchier conditions and slightly stronger thermals. All my flights with the Leaf 2 were using the Altirando Lite harness, which is not overly weightshifty. I found I was relying much more on brakes than weightshift to turn the wing, but that worked very well. It turns quite flat like that, though it can be made to bank up when you get well established in a turn, and gives good feedback. It doesn’t get knocked back if you meet a rough-edged thermal, which is also very reassuring.

Playing along the ridge on a stronger-wind day the Leaf 2 coped well pushing into wind and felt steady on bar.

I had a lot of fun on this wing, which I’d summarise as very undemanding and relaxing to fly. Two things make it that way I think: for starters it feels very safe – I had no collapses or floppy wingtips at all – but just as important is the feeling that it tells you about the air, and the feeling of being in control.

It’s the perfect wing to put a new pilot at ease while they make their way from post-school to XC pilot, and as with other wings of its class I’m sure it will be proven to have more than enough performance for some decent XCs.