If you are looking for a top quality glider Skywalk has always been a go-to brand. But somehow, in a year that is turning out to be a classic for EN-C wings, they’ve managed to outperform themselves with their new sports class glider, the Cayenne 6, says Erwin Voogt.

Skywalk are based in Germany, close to the border with Austria, and were founded in 2001. As well as paragliders the company make kites under the Flysurfer brand; they also have a specialist tent company – X-Gloo is a big name in those inflatable tents you see at indoor and outdoor trade shows. The result is a company that employs more than 60 people at a large, modern and funky head office in Marquartstein, south east Bavaria, with lots of crossover and innovation when it comes to materials and design.

In paragliding, they focus heavily on XC, adventure and hike-and-fly rather than classic competition and put a lot of energy and resources into developing lightweight kit. They are the glider sponsor for the Red Bull X-Alps, and their top lightweight wing is the X-Alps 4 (EN D). 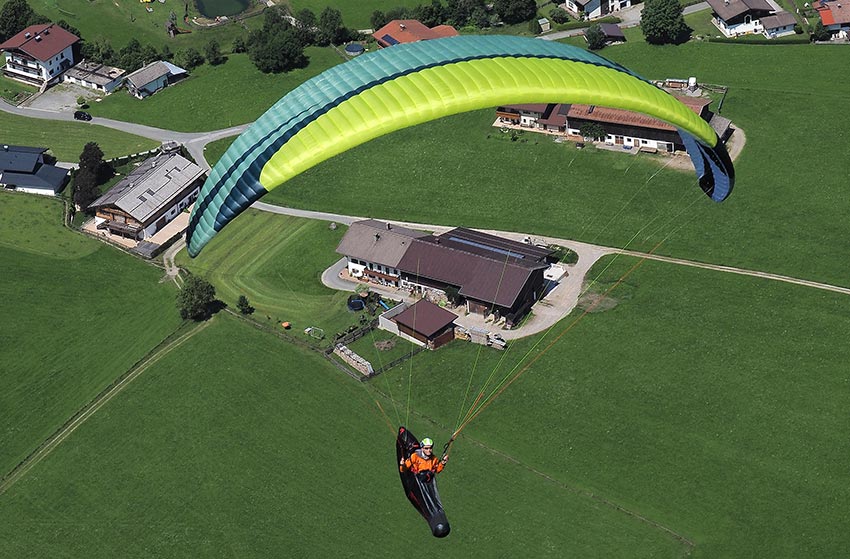 On their website they divide their wing range into Classic and Lightweight, with four wings in the Classic range (Mescal, Tequila, Chili and Cayenne) and seven in their Lightweight range (Masala, Arriba, Arak, Cumeo, Spice, Poison and X-Alps). They also have a mini wing (Tonic), tandem (Join’t) and harnesses.

The Cayenne 6 is Skywalk’s classic XC sports class wing, designed to be flown far. And it is definitely up to the job – Dani Martinez flew 294km on a Cayenne 6 on 28 July in Spain. I flew the glider for two weeks while on a flying holiday in Kössen in the Austrian Alps in early July. 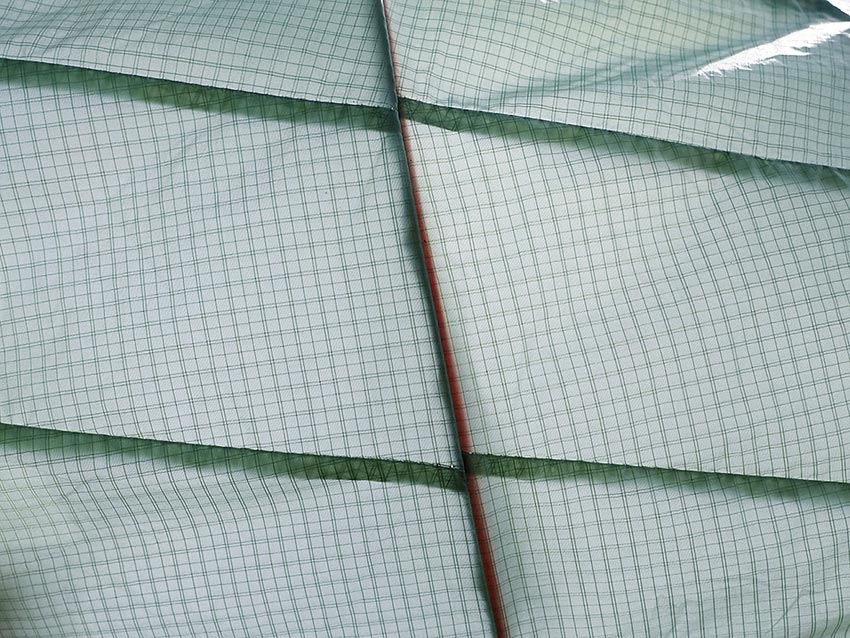 Dominico TX-Light fabric showing the characteristic double-weave ripstop pattern with the extra reinforcing thread through the centre. These additional reinforcing threads increase tear resistance by 30%, say Skywalk, and at the same time improve stretch properties in the diagonal direction. Originally developed for Skywalk’s kite-brand Flysurfer, it has an ageing-resistant coating of polyurethane and silicone.

This is a glider that is packed with new technology. The shiny new Dominico TX-Light fabric catches the eye first: it was developed for kites, which need to withstand salt, sand, water and sun. To obtain this durability, the fabric is coated with a combination of polyurethane and silicone. Additionally, it has a double ripstop pattern weaved into it with an extra thread through the centre of the squares for better tear resistance and improved stretch properties. On the leading edge we find the heavier, frequently used Dominico 30. 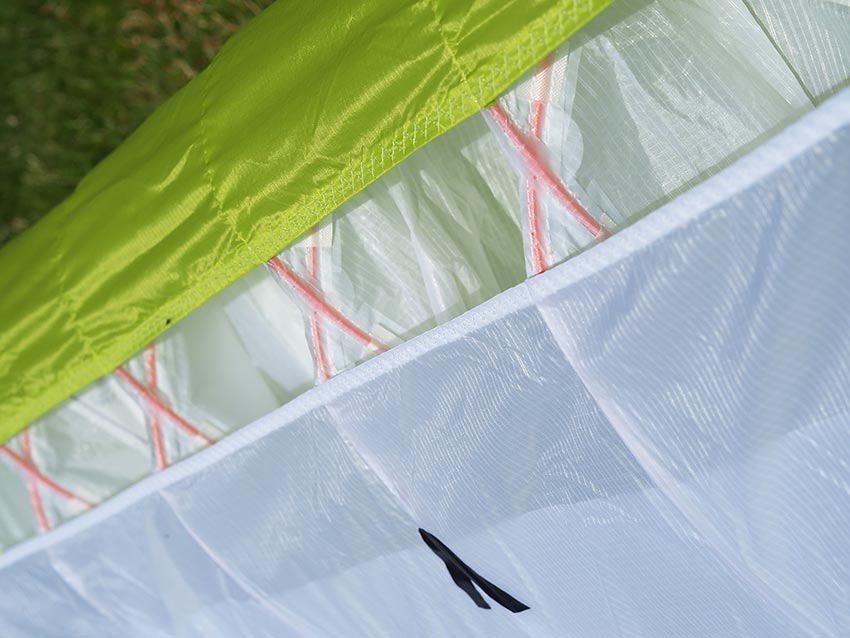 The second thing I noticed are the sheathed main lines. You don’t see that very often anymore on an EN-C glider. They are made from the new, lighter Liros PPSLS. Skywalk say they found that the performance difference is minimal. It just adds some weight to the glider, which indeed isn’t particularly light at 5.0kg in the 75-97kg weight range. (This is choice: Skywalk say an important part of their market demands durable gliders, because of the rough and rocky take-offs and landings for example in Turkey, Iran, Spain and Brazil.) The middle and top lines are a mix of Kevlar and Dyneema (Edelrid 8000U and Liros DC). 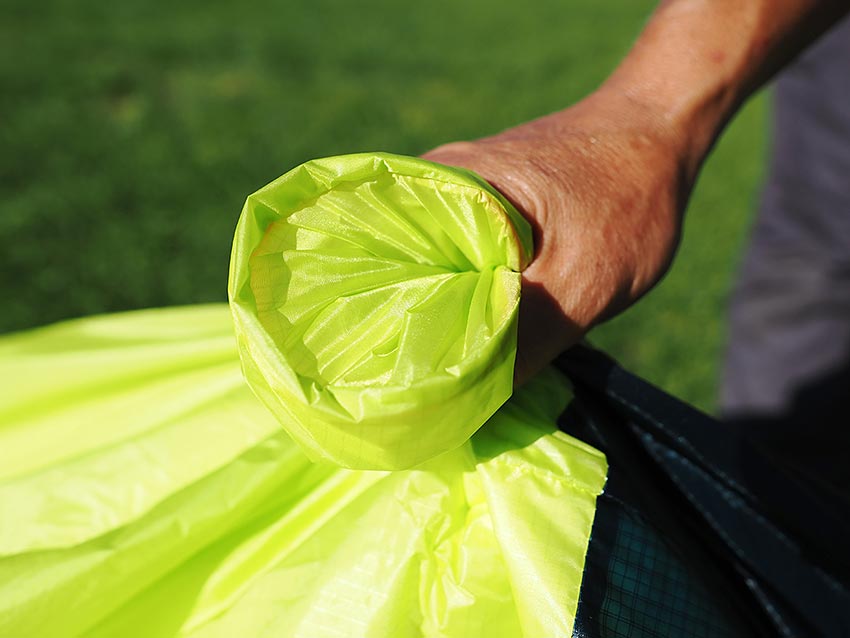 The long rods running over almost the entire chord in each cell are so flexible that you can bend them without doing damage, facilitating small packing of the wing.

The full upper surface of the Cayenne 6 has long plastic rods chordwise, in addition to the rods that shape the sharknose. The longer rods however are so flexible that you can crumple them without damaging. They spring right back, so no special packing technique is required. 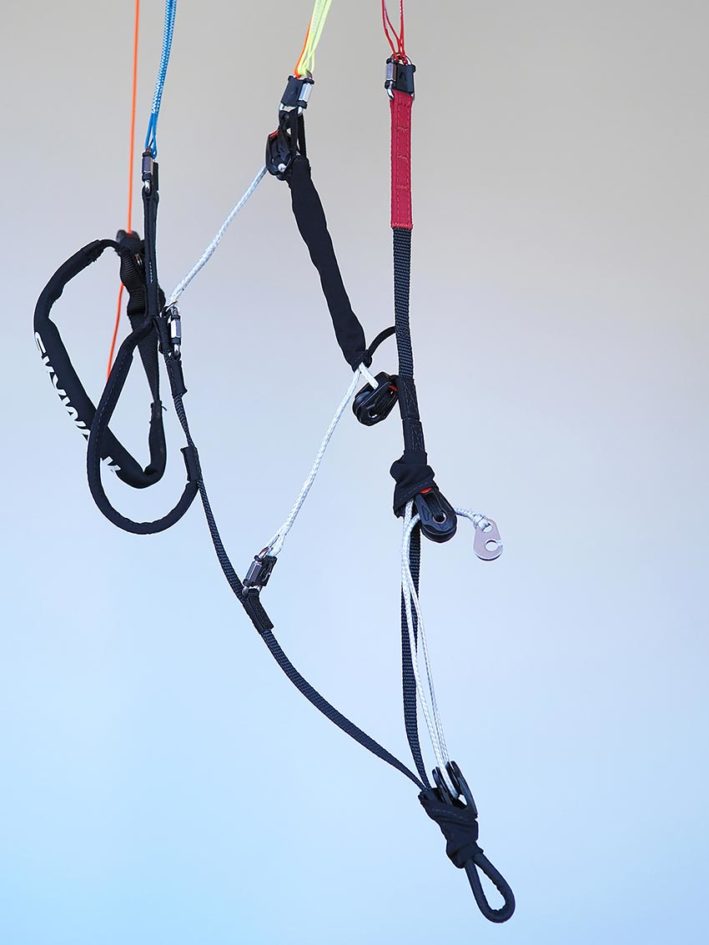 Risers are clean and easy to sort, with three sheathed main lines per riser, a stabilo and a brake line

On take-off, the first thing I notice are the clean risers. The set-up of the pure three-liner is simple, three lines per riser, no split-As. The latter can be uncomfortable while pulling big ears for a longer time, but my personal preference for flying without gloves in summer may have been the issue here. Not recommended.

The first couple of launches with the Cayenne 6 are in nil-wind. I soon notice that a little attention to sorting the canopy and the lines doesn’t hurt. The tips are slow to fill with air and it takes quite a bit of runway to get off the ground. The Cayenne 6 has a fairly high aspect ratio of 6.4 and 70 cells, which will take some time to inflate. The test report also notes that after an asymmetric collapse the tips do not automatically reopen, pilot input is needed. There may be a connection with the slower launch.

During the second half of the inflation the canopy accelerates and needs a bit of control to prevent shooting. This caught me out a couple of times: the brake travel is so long that I was too late to bring my hands way down. A wrap helps, especially for people with shorter arms. With some wind the Cayenne 6 launches easily and with stronger wind it behaves perfectly without a tendency to lift you off your feet prematurely. 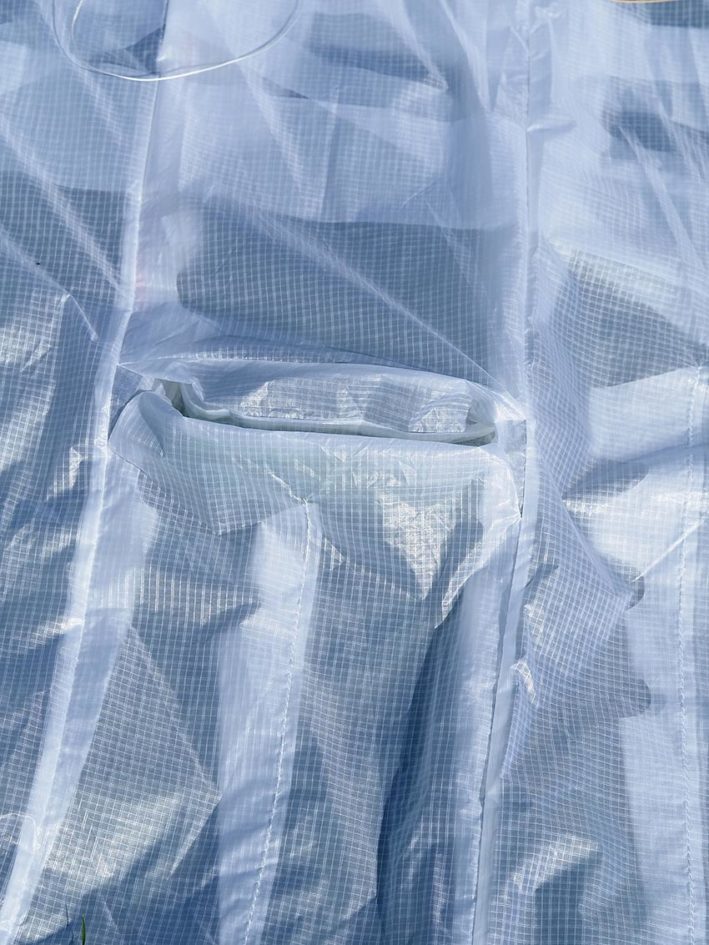 In the air, the Cayenne 6 shows its character. Skywalk told us that their objective was to create a more accessible successor in the Cayenne series and they clearly succeeded. For the sports class, and also with regards to the 6.4 aspect ratio, the Cayenne 6 is easy to handle. There is the usual roll and a slight pitch which needs to be managed in turbulent air but the demands on the pilot are not very high. The canopy is solid and moves as one, while the brake pressure is medium.

Flying the Cayenne 6 with the lightweight Skywalk Range X-Alps 2 – a hammock with a wire frame – I felt that the control on weightshift becomes too insensitive. Piloting comes down to brake input only, which requires quite some effort for efficient coring. But that may also be my own preference for a harness with a seatplate: I found it steers much better on weightshift with a seatplate, which means less brake input is needed and thermalling is less tiring.

The Cayenne 6 needs to be directed into thermals, it doesn’t bite into thermals aggressively but is not thrown out of them either. This makes for the comfortable ride, even in bubbly summer thermals mixed with wind and clouds. The wing tells you what’s going on without unnecessary chatter and leaves it to the pilot to decide what to do with the information. All you need to do is dampen some roll and hook into the lift.

I had only one collapse during two weeks of flying in summer conditions. A front tuck flying out of a thermal close to launch opened quickly by itself but caused some rolling, which needed managing because of the proximity to the slope. Pulled collapses are a non-event. 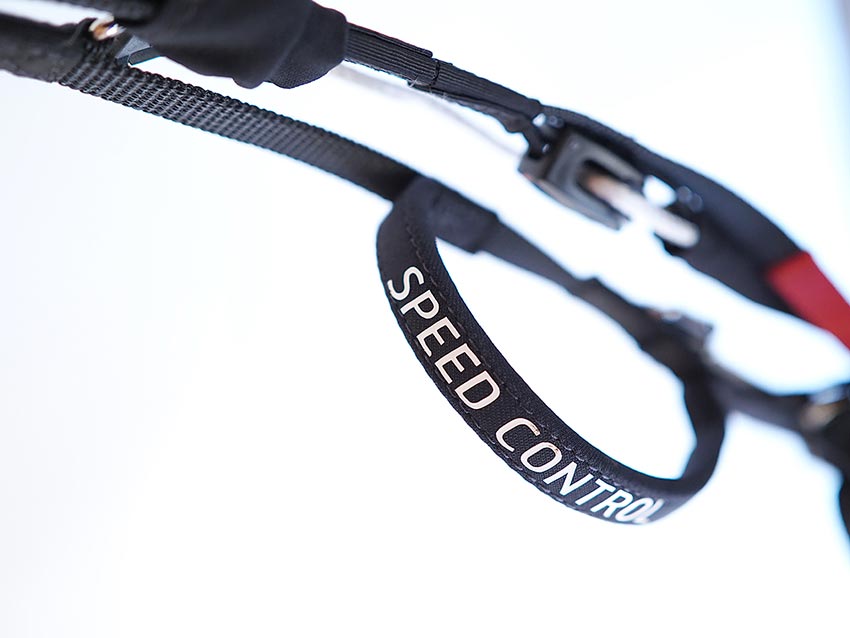 The Speed Control C-steering system works perfectly; pulling down Bs with Cs without a lot of force

The best feature of the Cayenne 6 is the Speed Control C-riser steering. The comfortable soft loops on the C-riser are surprisingly light to pull – not as light as brakes but a lot easier than just the C-riser.

The input is very effective. A two-pulley system pulls down the B with the C-riser, which gives no visible deformation of the canopy at all. It’s easy to make good turns on full bar and with a bit of practice you can catch large pitches when flying through turbulent air on bar. This means you almost never have to come off bar to control the glider.

Skywalk advise never to use the system without speed, because that will only deform the glider. Furthermore, they advise to make sure that the C-maillon is pulled down no further than the A-maillon, to avoid unwanted stalls. The top speed of the Cayenne 6 is fine for its class, with a gain of 11-12 km/h to reach just over 50km/h on our TAS speed probe – comparable with the new Ozone Delta 4, but a little slower than the Flow Fusion.

Finally, the Cayenne 6 is a playful wing with precise handling. You’ll have fun doing wingovers and spirals for a quick descent when necessary (without too much G-forces) and landing on a dime even in turbulent conditions.

The Cayenne 6 is a robust, beautifully constructed glider built with a lot of attention to detail. Because of the durable materials used there is no need to worry when the launch site isn’t a velvety grass lawn like in the Alps.

In the air, the Cayenne 6 performs without any sharp, unexpected edges, which frees up the mind for efficient coring, route planning or simply enjoying the flight.

If you are looking for a reliable partner in the sports class to tackle any flyable situation you may encounter and that can take a beating, the Cayenne 6 should be on your shortlist. 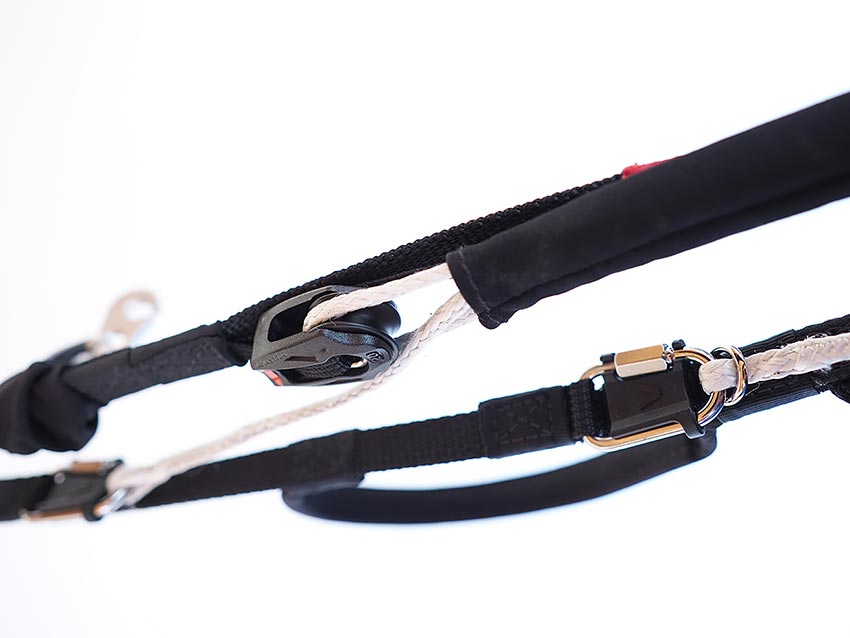 This review was published in Cross Country issue 213.
Subscribe here.

Erwin Voogt has flown paragliders since 2008 and is a paragliding instructor in the Netherlands. He enjoys all aspects of free flying – XC, hike-and-fly, a bit of acro and helping new pilots with their first steps. Erwin flew the Skywalk Cayenne 6 XS with the Skywalk Range X-Alps2 pod harness and with a regular harness with seatboard at an all-up weight of 88kg and with ballast at 92kg. The review was written up by his partner, pilot and science writer Bastienne Wentzel.