The Arak Air was released in February this year, a lightweight version of Skywalk’s already ‘semi-light’ multi-tool glider the Arak, which came out in autumn 2018.

The Arak Air is made to be a lightweight, go-anywhere glider to take recreational pilots on vol-biv adventures at their own level and in safety. The design brief was for great performance and safety with minimal weight, small pack-size and easy handling. It is made in five sizes, with extended weight ranges to allow for extra vol-biv kit. I flew the XXS (55-75-80kg) at around 70kg all up.

The Arak Air is some 30% lighter than the Arak, and it weighs just 3.1kg in the 21m² XXS size, or 2.9kg with the Dyneema riser set. That it manages to be this light and yet has user-friendly sheathed lines is impressive.

It is made from very lightweight fabrics, and Skwalk caution that it needs to be looked after and not dragged around on launches. Skywalk describe it as a mid-B, the same as the Swing Arcus 2 RS also reviewed in this issue, and coincidentally it also has 57 cells and a flat aspect ratio of 5.4. 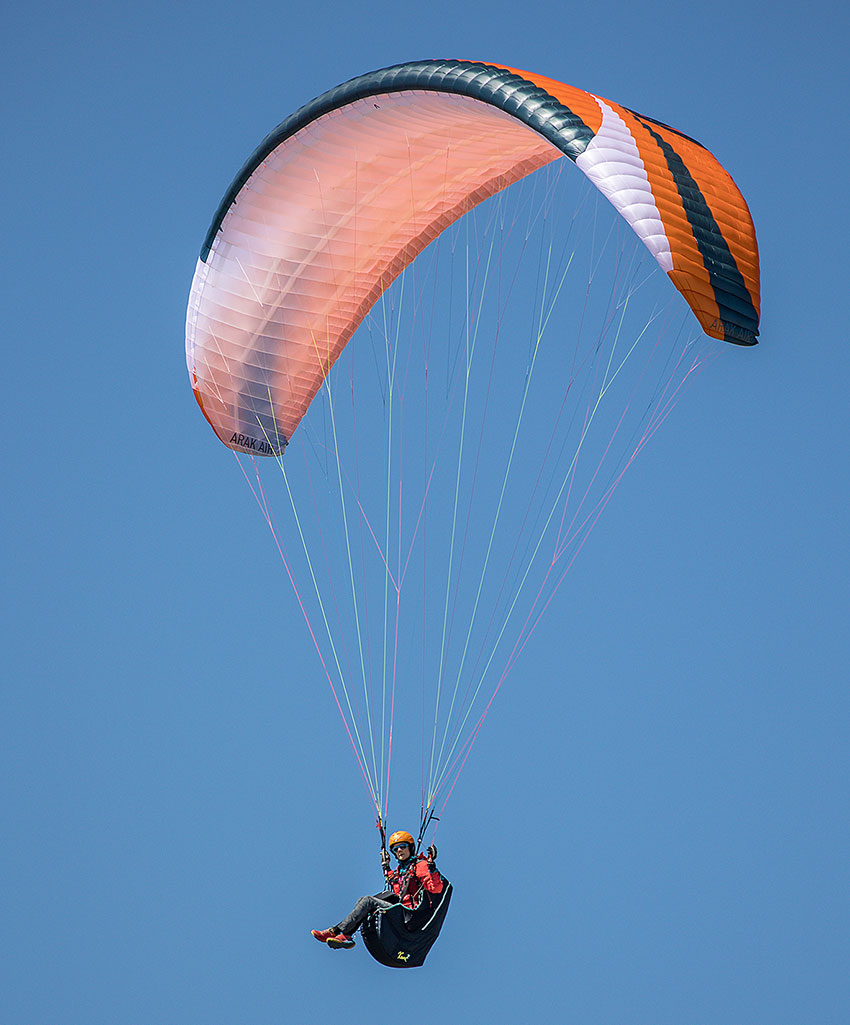 A delightfully small and lightweight package appeared in the post. The box said Skywalk on the outside, but it was so small I almost doubted it was a normal-sized glider they had sent. It was. The wing was neatly packed in a small stuffsack with mesh vents and a compression zip. A package that would definitely fit inside a moderately-sized hiking rucksack, and actually Skywalk can supply the Arak Air with their Hike technical rucksack for a slight surcharge. However, it turns out I had neither the technique nor the patience to coax the wing back into its stuffsack again on my own.

The wing is made from the beautifully light but rather slippery Dominico Dokdo 10D, like the Advance Pi 3, and its slipperiness makes it difficult to pack without help. I swapped the stuffsack for an XCertina Compress bag, making my landing-field life a whole lot easier, but it was a little bit big. The Arak Air is crying out for a specialised easy-packing bag. While the leading-edge supports are flexible and bend-resistant, Skywalk do recommend packing concertina style. 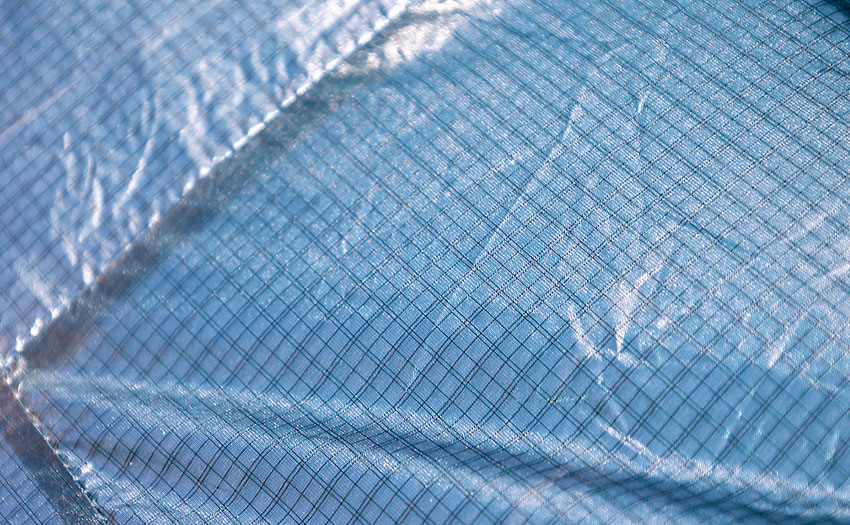 TX-Light fabric comes from kiting, and Skywalk say it is ageing and tear-resistant

The undersurface and most of the top surface of the Arak Air are made from 10D, while the leading edge, where the risk of damage is greatest, is Skywalk’s slightly heavier TX-Light fabric, as seen on the Cayenne 6. Skywalk say this material, originally developed for surf kites that are exposed to salt water and UV radiation, “sets new standards in terms of ageing and tear- resistance”. 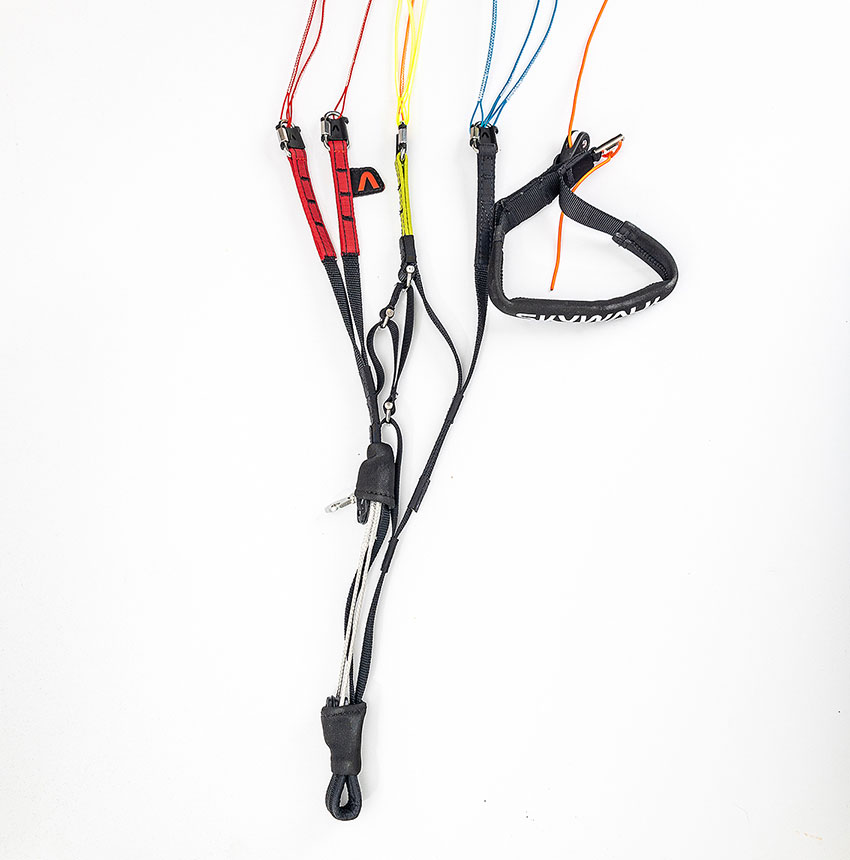 The speed system pulleys are plastic, light but fairly chunky and robust-looking, and the speed system has standard Brummel hooks. The lines attach to the risers with maillons, with plastic inserts to keep them in the right place, and the brake handles are made of webbing and lightly padded neoprene.

The brake lines have swivels and run through plastic pulleys, with poppers to attach to the risers. There is no C-steering system. Skywalk say: “As opposed to gliders with two line levels with which you can change the angle of attack by pulling the rear risers, doing the same on a glider with three line levels causes the profile to deform. This results in a crease forming between levels, which makes the glider more susceptible to collapses.” On a mid-B glider, you could say the lack of complication is also an asset.

If you are going to hike-and-fly or vol-bivouac a lot and weight is a priority,  Skywalk offer a Dyneema riser set as an alternative. It saves 200g and also means you can pack the wing even smaller, but Dyneema risers are less user-friendly and do take some getting used to. 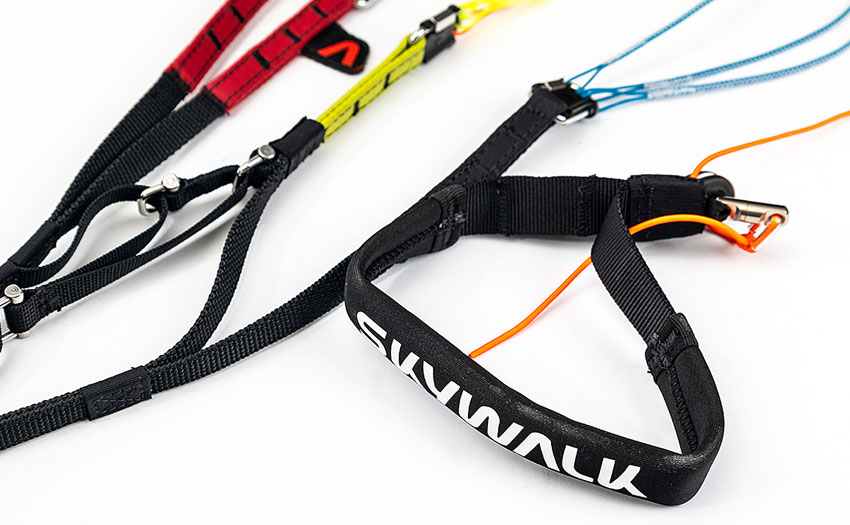 Comfortable, padded brake handles attach to the risers with poppers

The Arak Air has the design traits we have come to expect on modern paragliders: a sharknose, smooth 3D-shaped cells, and trailing-edge mini ribs that effectively double the number of cells there for a sleeker finish.

The quality and finish all look really good, and I heard lots of comments like, “elle est belle”, “what a beautiful wing”. What jumped out at me most on the first unfolding, especially as I have not flown a Skywalk wing before, were the Jet Flaps: a row of slits towards the trailing edge. They are there to improve the stall behaviour, lowering the speed at which the glider stalls. Skywalk say, “Jet Flaps are so-called split flaps like those seen on large aeroplanes. When the glider is braked, the airflow is routed through the glider, restoring smooth airflow. This extends brake line travel and softens the stall behaviour”. Skywalk add that the Jet Flaps also aid climb performance.

I can’t say I was aware of the Jet Flaps’ effect when I was landing – the Arak Air lands easily, beautifully, the same (to me) as most gliders – but I purposely had a play when groundhandling. I pulled the brakes down as far as I could without wraps, and my hands were by my seat before it showed any signs of stalling. I think the beauty of the technology is probably that it does its job of keeping you safer without you being aware of it, which has to be a good thing. No need for you to adapt your methods or techniques – win-win. 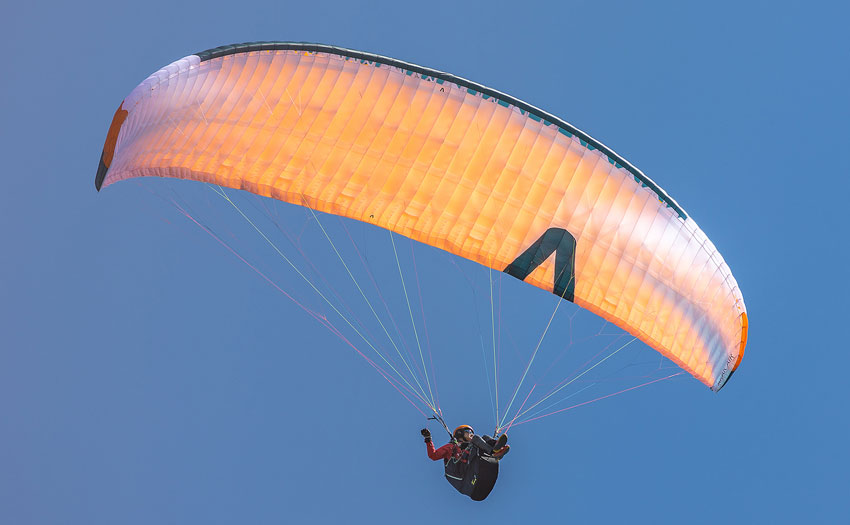 I flew the Arak Air in a range of conditions, starting with an arrived-too-late end-of-day flight with a nil-wind forward launch, through to a dodgy what-on-earth-is-going-on day of leeside flying at my local site, the likes of which I have never experienced before. I also enjoyed some gentle thermalling at Gourdon and strong but clean thermals at Saint André-les-Alpes. I have to say that in all of these scenarios, the wing was very reassuring, comfortable and safe feeling. It does not pitch about much, but still feeds back information about the air, and is predictable and confidence inspiring.

On my first nil-wind forward launch, I was surprised to find I needed to put pressure on the A’s and keep driving it forward for longer than I had expected to. On subsequent forward launches I didn’t really notice this, so I don’t know if it is a characteristic of the wing in zero wind, or because I came at it from mostly forward-launching hike-and-fly wings. Either way it’s not an issue, just a comment.

Reverse launches were easy and well behaved in all wind strengths. On light-wind reverse launches the light sail was appreciated – it comes up into the airflow easily and straight overhead. In stronger conditions, I tended to launch with just the middle A’s and found the wing very manageable, a confidence-inspiring wing for a busy launch.

In the air, it is just super comfortable, the right balance of feedback with good damping, and it is a joy to thermal. It climbs really nicely, and it’s easy to fly flat or banked turns as you feel. It reacts immediately to brake inputs and moves homogeneously, feeling nice and compact. I’d describe the brake pressure as moderate, on the lighter side if anything.

I didn’t have any hesitancy about using the bar, even in strong conditions. The full speed bar travel is 15cm, and I flew it at around two-thirds or so quite a lot. It’s not a slow wing, and especially with bar I could keep up with the general pack as it progressed away from launch and along the ridge at Saint André.

Into wind it did OK too. It’s difficult to gauge comparative speeds – you can’t tell who around you is using how much bar, plus everyone is on different sized wings of different levels – but keeping up with the general pack, on a small mid-B, while feeling comfortable and safe is good enough for me.

I did a little XC circuit and did not feel in the least bit held back by the wing; I didn’t have the drive, endurance or bladder capacity for a six-hour flight to Dormillouse and back, but the guys who did, I have no doubt, would have done it on an Arak Air if that is what they had been on. 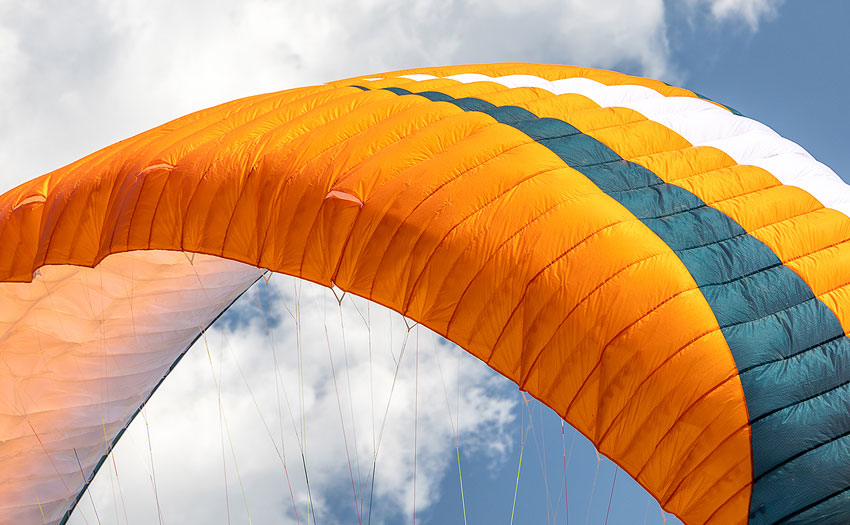 I found myself in some bad air at my local site one day and was caught out by changing conditions that I hadn’t spotted and didn’t really understand. From soaring the ridge with a handful of others, all struggling to climb in stable air and finding it windier than expected, I was suddenly flushed.

When I say flushed I mean absolutely drilled, so that from a position where the landing field, which is on a plateau, would have usually been easily reachable, it suddenly wasn’t. I was too low to comfortably make it.

No drama, I flew to the edge of the plateau the field is on, which normally would be in full valley flow, expecting to climb. A narrow strip next to the river at the bottom of the valley was my  emergency Plan B if that didn’t work.

But instead of being rocketed skyward, I found the glider being thrown about with little forward speed, fully inflated except for the tips which flicked in and out on alternate sides. If this was rotor, and it must be, the wind must be coming from the hill and the bomb-out option was suddenly not very appealing either.

I clung on, and managed to throw in a couple of windy 360s to get enough height to pop it down right behind the trees (I know!) on the plateau, where I wouldn’t normally dream of landing even on nice / normal days. It plopped down nicely and undramatically, and I walked back, rather embarrassed at my misjudgement, to applause from the other pilots who had watched my little drama.

My colleague at Cross Country magazine, Laurent, has recently bought an Arak Air. It is his third wing, and he comes to it from a low-B that turned out to be a little big for him, especially since he moved to the French Alps.

I asked him what he thinks of it, and he agrees with my assessment that is is very stable and comfortable. He really appreciates its lightness, likening its launch and landing behaviour to that of a single-skinner. He tested another lightweight B before settling on the Arak Air, finding the Arak Air noticeably less nervous and  twitchy than the other, despite, he said, giving more feedback than any paraglider he has flown to date. He has now flown several hours on it and is totally smitten.

In conclusion, I’d wholeheartedly recommend the Arak Air to anyone who is looking for a lightweight B. You have to look after it, as with any other lightweight wing, but in return I feel it will look after you, rewarding you with safe, fun flights while you explore your limits whether that is vol-bivouac or site-flying.